Each name holds a certain weight and meaning, whether it’s derived from historical origins, or a mashup of different things. But we don’t necessarily have to fit ourselves into a box because of it. As our next profile would tell you, a single name can encompass many things—different meanings, entities, and even personalities.

In the next part of our series, we’re (re)introducing Faris, whom we were first acquainted with here in our previous collaboration with the Singapore Art Museum (SAM). As part of the Visitor Experience team at SAM and an artist himself, Faris is no stranger to the ins and outs of the sometimes wacky, but always wonderful contemporary art scene in Singapore. In fact, he counts SAM’s new exhibition space on Level 5 of Tanjong Pagar Distripark as his favourite SAM space yet because of how atypical a space it is for a gallery to occupy, which lends itself to a more experimental curation of works.

Apart from his professional persona as Faris the artist, he has another identity and story built around his name. Read on as he shares more about how he identifies with this name, and how it’s shaped his beliefs and the person that he is today. 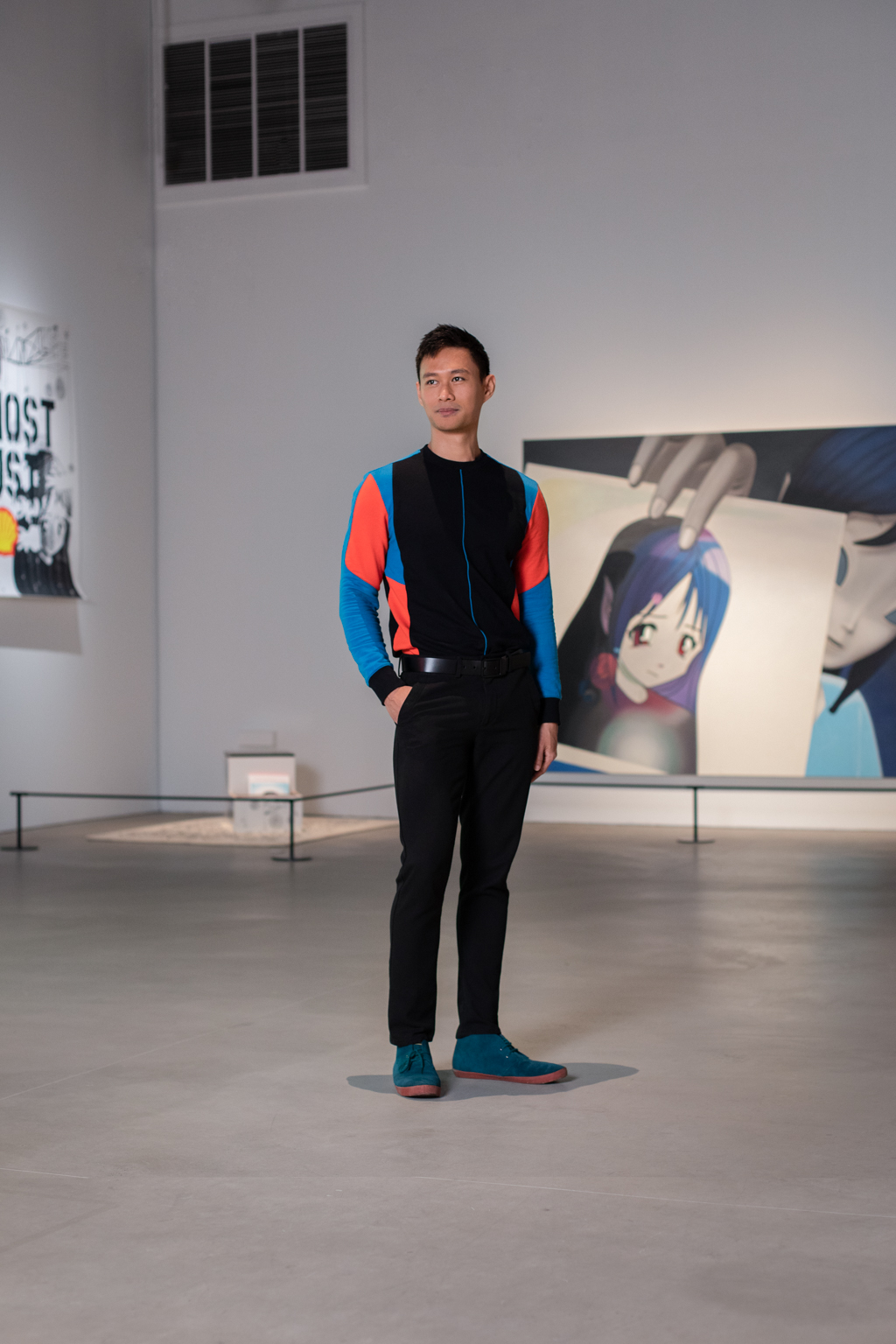 Shentonista (S): Tell us more about the meaning behind your name, Faris, and how you’ve related to it both at work and in your personal life.

Faris (F): Growing up, my mum would tell me that it means two things—a knight riding a horse (which is meh), and the foreseer. The latter is definitely something that she held on to quite dearly, because she really believes that I can foresee the future!

Of course, I don’t believe that I can see the future now, but over the years, I’ve grown to become a person who will always prepare for every possible outcome in any situation, whether at work at SAM, in my own art practice, or even in my personal life—I’ll always think of the worst-case scenario and prepare myself for it. Most of the time, this worst-case scenario doesn’t happen, but it’s still a habit that I have. After all, better safe than sorry, right?

Perhaps this stems from a time in my childhood when I could really foresee the future, or perhaps this gift is still hidden within me—I’m not too sure exactly, but it’s how I relate to the meaning behind my name now, and my younger self. 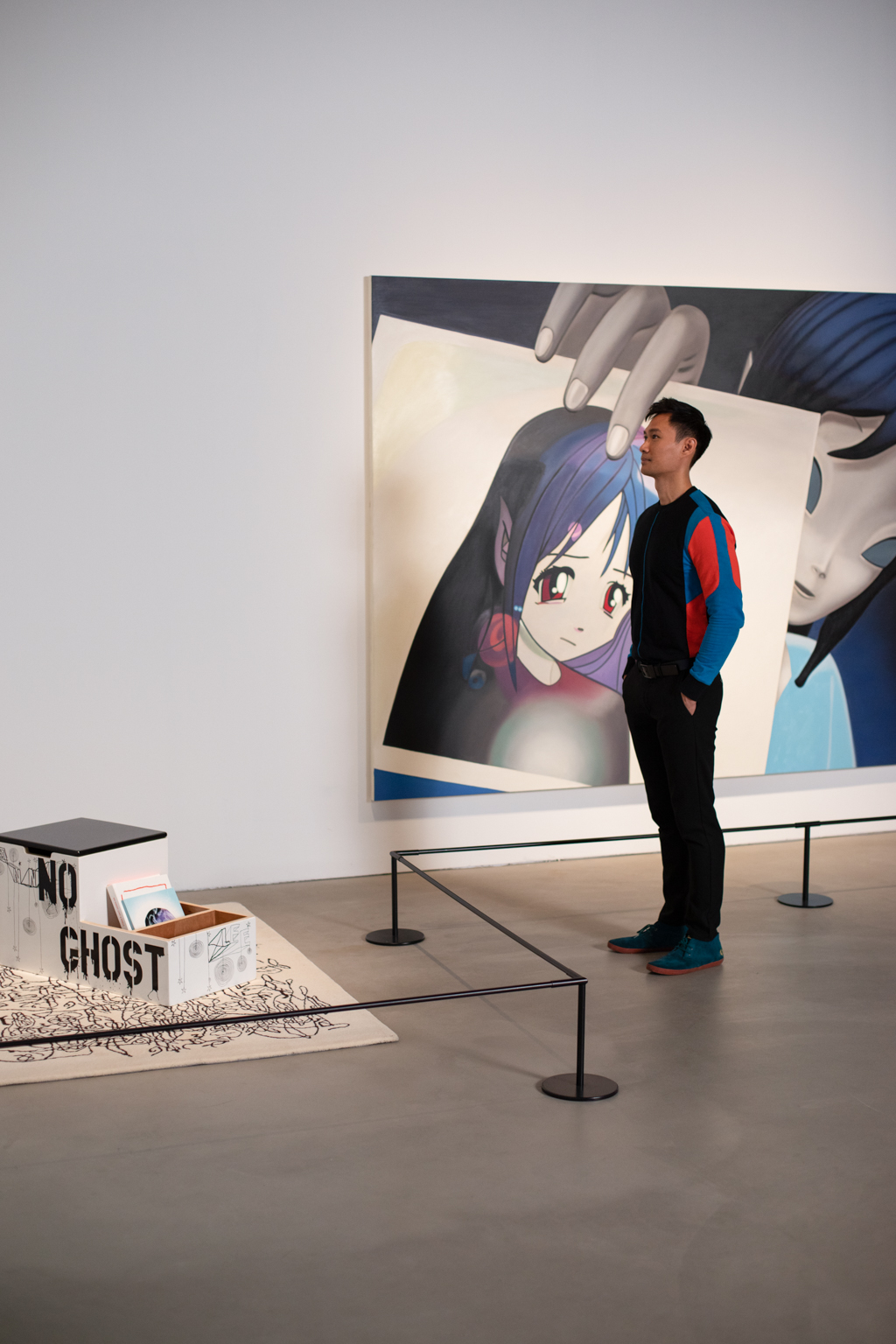 S: If you were to curate an exhibition with the clothes in your wardrobe, what would it be called, and what would the message of the exhibition be?

F: Oh wow (laughs). I think I would have to sit down and think about this one.

As for the theme and the message, I think it would be something that strongly relates to the things that I love most, which would be my family, my pets (I have a dog, a cat, and many, many beetles), and nature. So even though my clothes are quite minimalistic, I believe that there is a strong sense of nature, family, and my home in them as well.

S: What does the name Natasha mean to you, and how has this name informed the way that you experience the Singapore Biennale 2022?

F: I personally don’t know anyone named Natasha, so I really wanted to find out for myself who Natasha is, and why the Biennale was named Natasha, and after three months, I think I’m starting to get a sense.

This is going to sound really cheesy, but I feel like Natasha is everything, which is interesting because we’re all trying to attribute a single thing, person, work, or identity to Natasha, when she’s really the entire environment that has materialised through the Biennale. She’s in the air around us, the walls, each artwork, even the experience of taking the lift from Level 1 to Level 5 of Tanjong Pagar Distripark—this entire ecosystem (for lack of a better word) is Natasha, and by viewing the works at the Biennale, we are all experiencing who she is.

In fact, I think I would be rather disappointed if I were to discover that Natasha is indeed just a single thing, entity, or artwork (laughs). 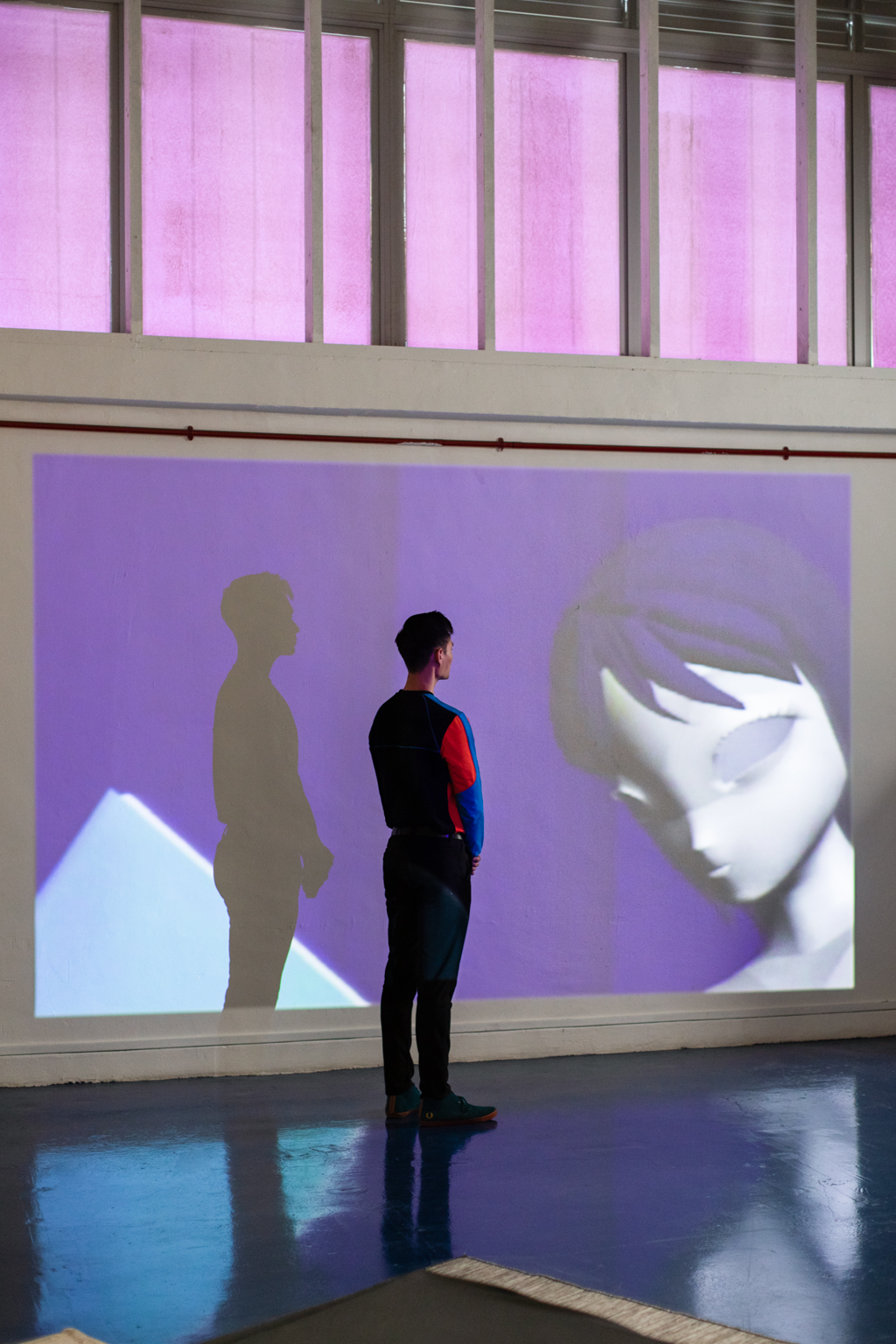 S: What was it about No Ghost, Just a Shell that stood out to you, and how did this piece inspire your outfit choice?

F: The most obvious reason would be the visuals. It’s based on a Japanese-inspired anime-looking character, AnnLee, and features works by a number of different artists, all putting their own spin on the character.

Growing up, I’ve always been a big fan of Japanese anime. Neon Genesis Evangelion is my number one, and that anime itself talks a lot about identity, creation, recreation, life, and happiness, and when I look at AnnLee, I’m reminded of all of this.

You can’t quite tell the expression on her face, because in a lot of the iterations of her, she has no pupils, so it makes you wonder what she’s feeling in each iteration, which relates back to the title—No Ghost, Just a Shell—which is how I sometimes feel as well. It’s not a negative thing though, because we’re all constantly evolving, and are never just one thing. I myself am in the same shell, but my insides are always changing, much like an insect undergoing metamorphosis. I guess this is why I like insects so much too (laughs).

Anyway, my outfit was very much inspired by the main colours in the piece, which are blue, grey, black, and orange. Many different artists came together to put this piece together, which is represented in the patchwork-like detail in my outfit. That, and also, I feel like I look a bit like a Japanese character in a battle suit, ready to fight something, or like a version of Ultraman of sorts (laughs). 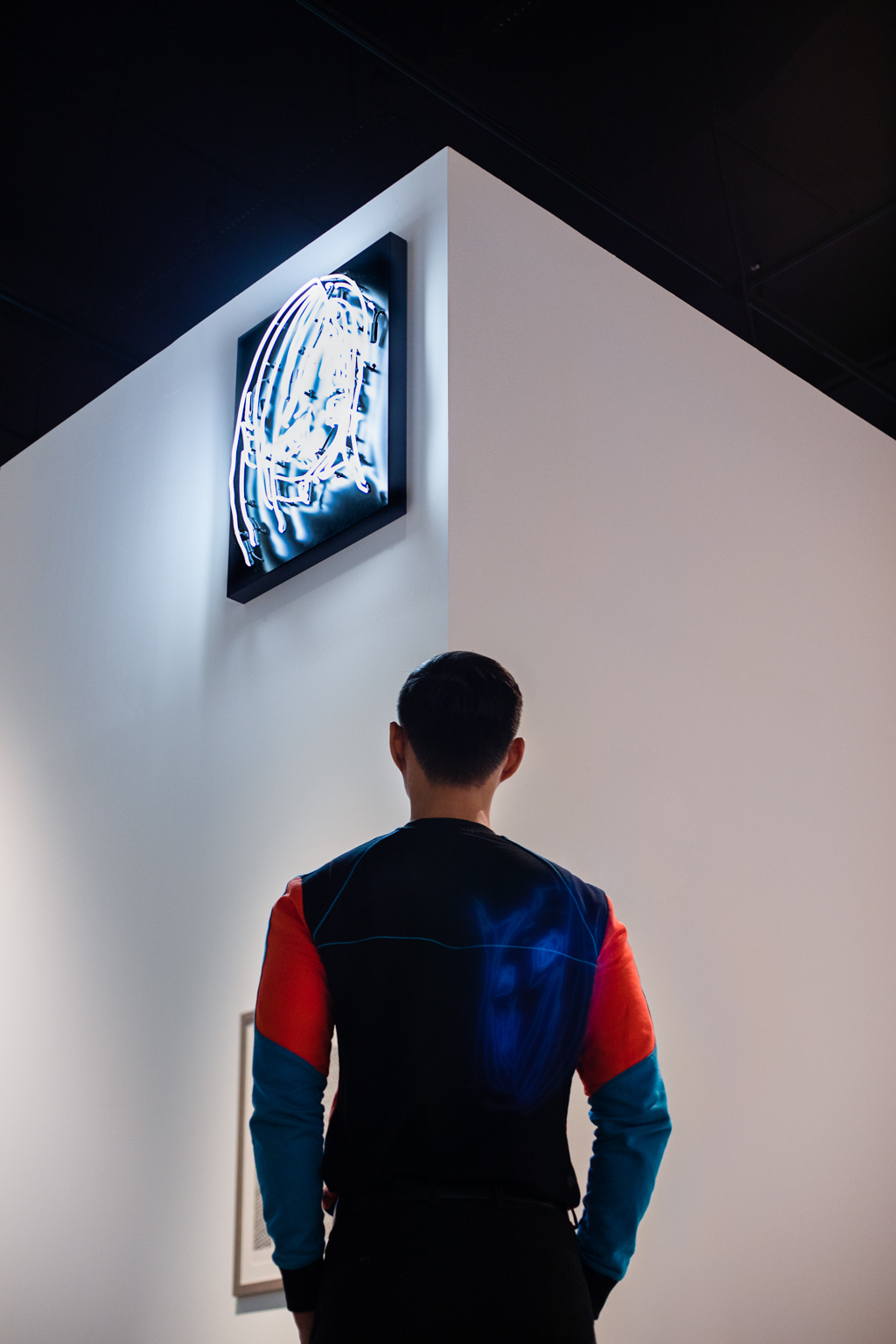 S: What do you hope people who view No Ghost, Just a Shell will take away from the piece?

F: That art is not just one thing. Yes, it’s existed for a very long time, but it can be anything and everything, much like how each artist has interpreted AnnLee in their own way, whether through digital mediums, sculptural works, paintings, or drawings.

I’ve been with the museum for seven years now, and I still hear people asking “Where are the sculptures? Where are the paintings?” Well, art is definitely not just confined to these traditional mediums now—it can be an installation of lights, video works, or even found objects put together. So I hope this piece allows people to discover the freedom to create anything at all. 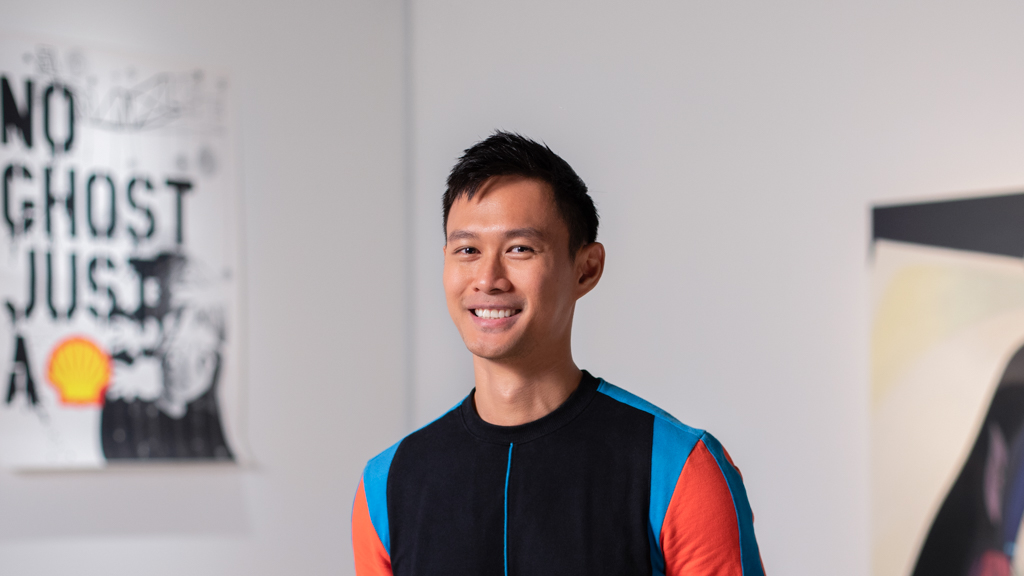 This is a content partnership with Shentonista and the Singapore Art Museum. We’ll be at SAM on 14 & 15 Jan from 1–5PM, hoping to photograph and tell the stories of those who come by—we hope to see you there!

Entry to the Singapore Biennale galleries is free from 6 to 15 Jan. To learn more, go to singaporebiennale.org or follow @sgbiennale (IG) @SingaporeBiennale (FB).

#SingaporeBiennale
Singapore Biennale 2022
Natasha joined by many other names