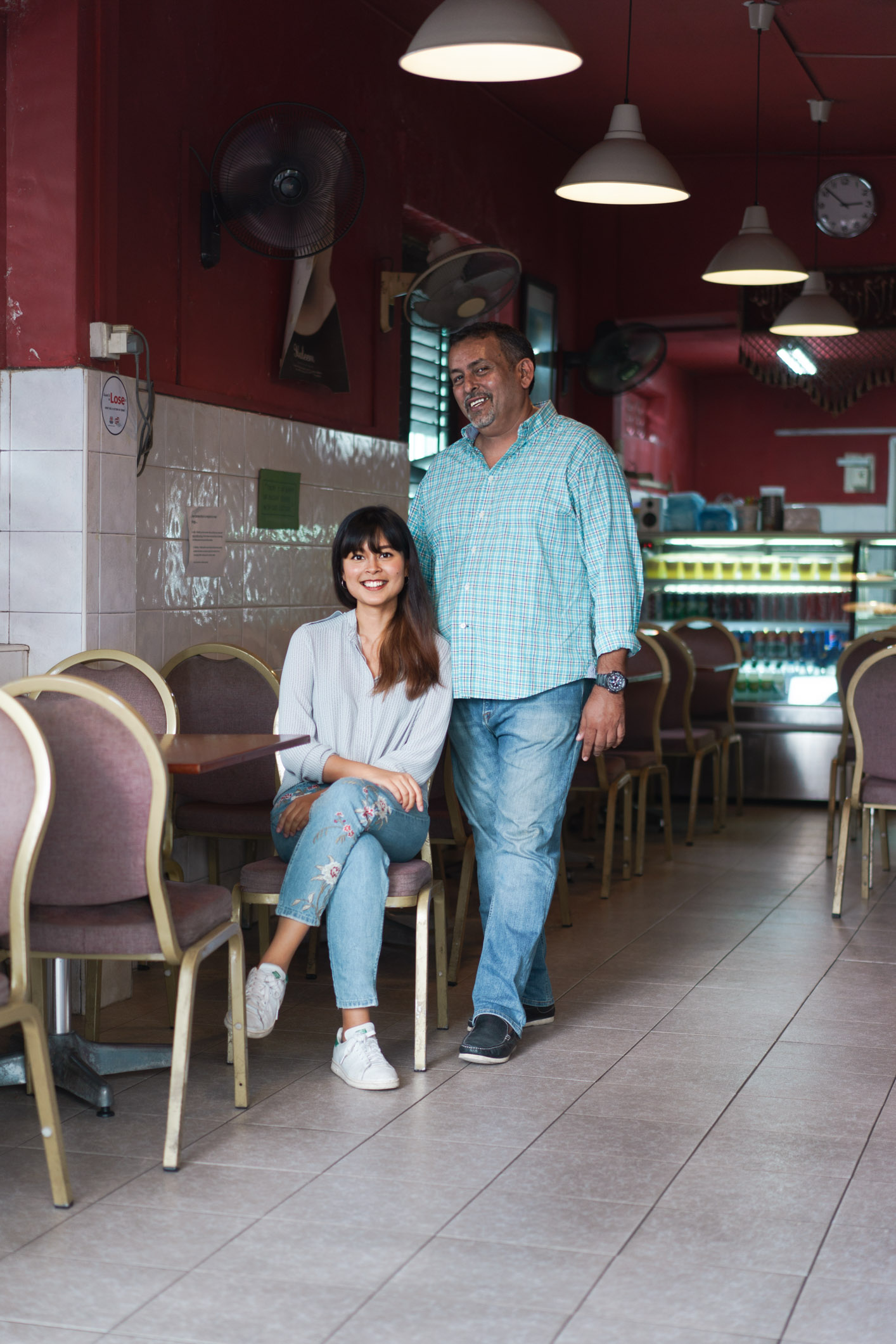 Tucked away in Little India, on Dunlop Street, Bismillah Biryani is a culinary gem hidden in plain sight. It was a quiet Wednesday afternoon when we visited—a far cry, we were told, from the busy weekends where just trying to make your way around the crowded shop is no mean feat. Posters, handwritten notices, and intricately embroidered wall hangings flank the wine-red walls of this corner shophouse, whose dimly-lit interior belies the state-of-the-art machinery in the kitchen that ensures the perfect plate of biryani every time. This isn’t your typical biryani, however; Bismillah firmly believes in making ‘real’ biryani. This means no gravy or curry; instead, you’ll find chunks of tender, spiced meat in a generous heap of fragrant, fluffy basmati rice. This is accompanied by a variety of homemade kebabs, a mango lassi that actually tastes of yogurt, and finally, a serving of kulfi—what looks like mini popsicles, but is actually a rich, creamy, frozen dairy dessert studded with pistachios, almonds, and walnuts.

Bismillah Biryani was given a Bib Gourmand rating last year under the Michelin Guide, but the long road to success began 15 years ago, when owner Mr. Arif Salahuddin, a former journalist with a background in advertising, opened the first Dunlop Street store. The business has expanded rapidly in the last few years; they now have stores in Nexus@One-North near Buona Vista and in an NTUC Foodfare foodcourt in Simei, and will soon be welcoming a fourth store in Changi Airport’s new Terminal 4 wing later this year. They also recently opened Bismillah Halal: The Meat Shop, a butchery which Mr. Arif describes as “vertical integration”, allowing them to buy and sell their meats direct from the source.

In the midst of all this, however, what really attracted us to Bismillah Biryani was the fact that Mr. Arif’s daughter, Zara, left her full-time job at a creative studio to join the family business last year. With recent talk about how an older generation of hawkers are failing to find heirs to their businesses, Zara’s move is an exception. We were also interested to find out how her experience with social media, photography, writing, and styling—skills that seem much more relevant to a café-hopping, Instagram-savvy, millennial generation—could benefit the decade-old Bismillah Biryani. As such, our conversations with the father-daughter duo centred around what it’s like working with each other, and how they’ve come together to take Bismillah Biryani into the future. 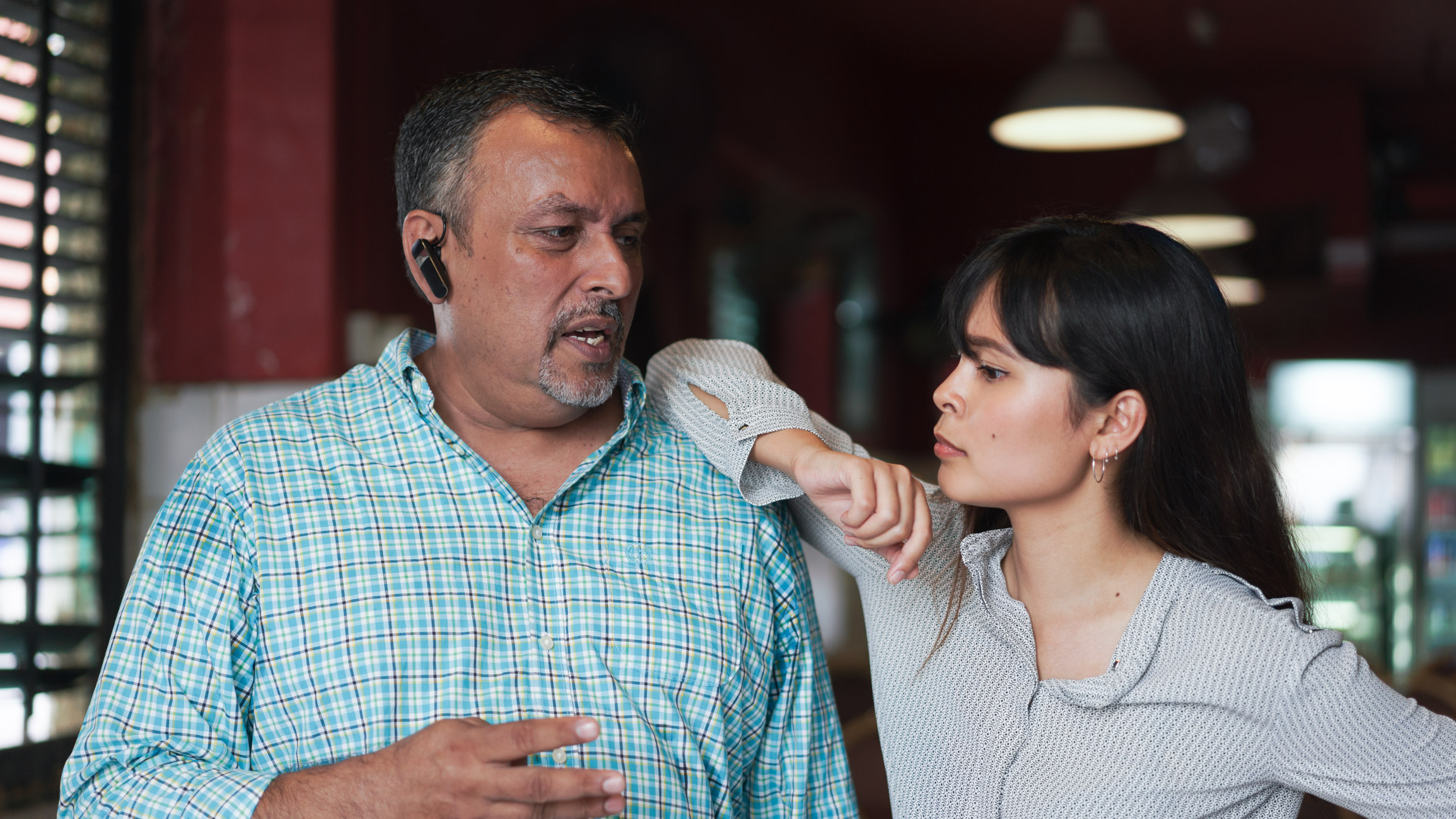 Shentonista (S): We’d think that working together as a family isn’t always easy. How has it been?

Mr. Arif (A): My challenge is to win Zara over—eventually, to develop her interest in the entire business, so I can take a back seat.

Zara (Z): Honestly, the first few weeks were tough. We butted heads a lot and my mom tried to ease the situation. I decided that I wouldn’t fight him so much, learn to be more understanding, and see things from his point of view. At the end of the day, he built this business from scratch and he does know what’s best. When it comes to things like social media, though, I do try to weigh in, especially having spent three years working in that arena. We’ve fallen into a rhythm and now no one is stepping on anyone’s feet and we can all work in harmony.

S: Zara, was this always something you wanted to do?

Z: No, you can ask my parents! I was so resistant to the idea of being in the food industry—I’m not a big cook myself, so other than my love for food styling and the fact that it’s the family business, there wasn’t much compelling me to join my dad. He’d initially wanted me to join him after I graduated from university—I have a degree in Industrial Design—but I asked him to give me a little bit of time to try working outside, and that little bit of time turned into three years. I was finally persuaded by my family to take up the role at Bismillah.

Working with family can be tough at times, because if you have a disagreement you can’t just leave it at work—you get home and it’s the same people whom you were just disagreeing with (laughs). But I feel working together has brought my dad and I closer to each other and I definitely appreciate that. Also, the fact that all my friends love the biryani makes this job so much more fulfilling.

S: What are some things you enjoy most, and some challenges when it comes to your line of work?

Z: I enjoy all the creative parts of the work, but that’s not part of what I do every day (sadly). The biggest challenge for me was when my dad made me take over finances. Not being a numbers person I was struggling with Excel sheets on sheets on sheets. He needed me to present so many different analyses that I was having headaches from running numbers. (That’s how allergic to numbers I am.) But it’s definitely improved and now I can say Excel is not an enemy but a distant relative that I don’t dislike. 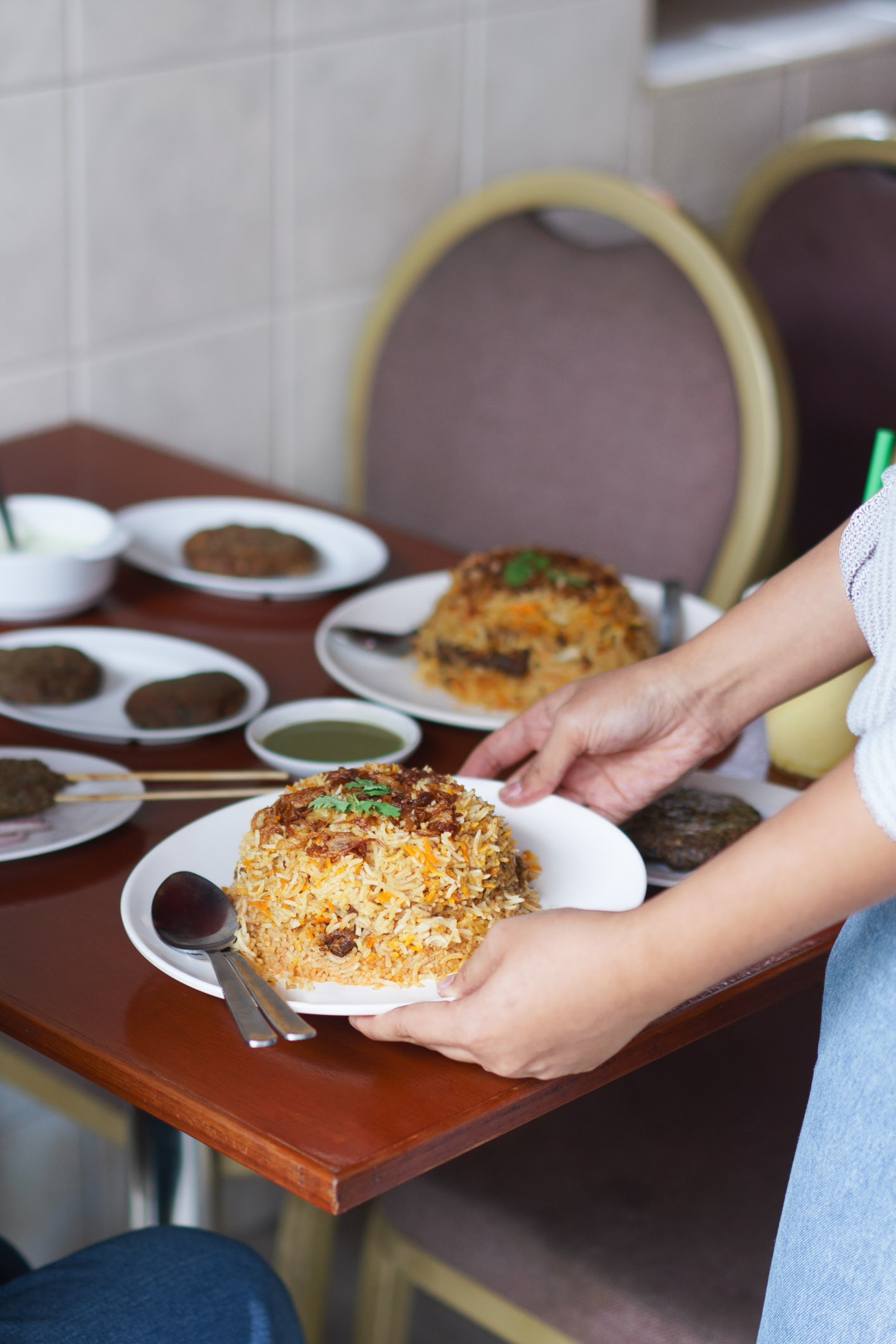 S: What do both of you bring to the business, from your different working experiences?

Z: I think I’ve picked up quite a wide range of skills with my past jobs over the years and it all comes into play with the varied scope of work I face now. I’m involved in anything outside of the kitchen—I liaise with the press, take photos, do finances, deal with staff issues, and other logistic matters. I’m also trying to work out a social media plan for the brand.

When it comes to business direction though, my dad is the mastermind. He’s constantly working (cough, workaholic, cough) and has ideas flowing out of his ears. He needs to learn to relax a little! (laughs) Being his sounding board I help him with executing his ideas, especially in terms of design. With Bismillah Halal: The Meat Shop I was finally able to put my design skills into good use, designing the logo which was approved by the head of the company, and not just because I’m his daughter. I’m adaptable and I think my keen eye has been helpful to my dad (I hope). He’s a tough boss, but that will help me grow and learn, and he’s always ready to help me and teach me along the way. I’m actually glad he isn’t treating me like his young child because that wouldn’t do any of us favours.

A: As a former journalist, I’m sure I bring over the part where you question everything—the investigative part of journalism, you can say. Zara is a very creative person so that helps me a lot. Food is about styling and creativity of taste, aromas, and presentation and Zara has fit in very nicely in the whole thing. She’s not just a sounding board, but has a mind of her own and it helps to have her work with me on everything. She has improved the bottomline since she joined.

S: What role does social media play in the family business?

Z: A few years back I suggested setting up social media accounts for Bismillah but my dad wasn’t too keen on the idea. I backed down then, not wanting to start a fight, but now he’s the one asking me to manage the accounts and going on about Facebook and Twitter. The impact social media has on any business nowadays is undeniable, and I guess he feels the same.

S: Can you tell us a bit more about the business direction? Why the decision to open a store in a food court instead of another full-service restaurant?

Z: My dad has a golden answer for this.

A: I suppose the decision to open in a food court and at a lower price point is to introduce the ‘real thing’ to everywhere we can. It’s a long-haul decision to wipe out fake biryani and replace it with authentic biryani—that is, the dam pukht way of cooking. This style essentially originated from Central Asia and the Mughals brought it to the Indian subcontinent. 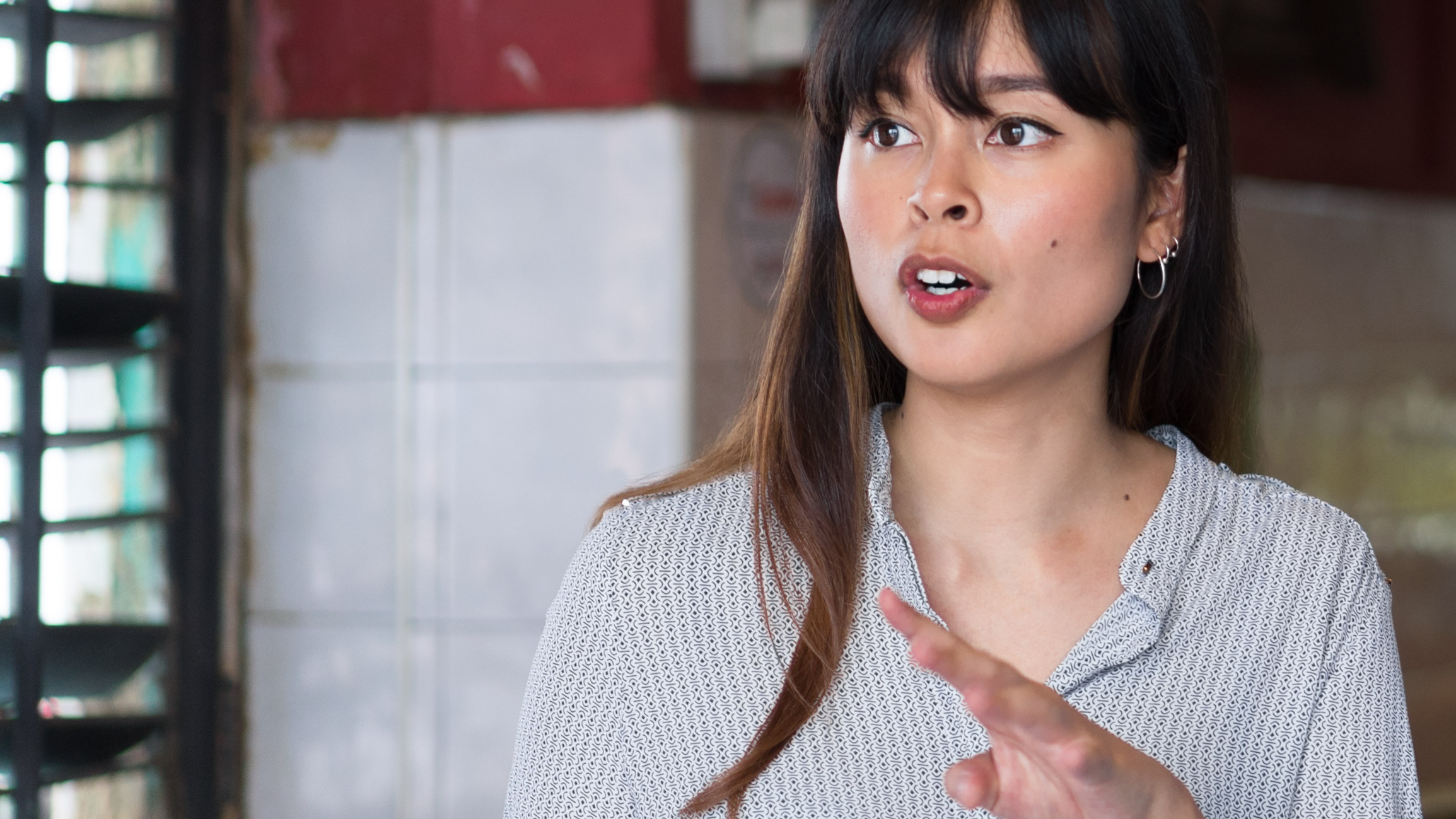 S: In your opinion, what makes a good biryani?

A: It’s subjective since my plate of biryani can be different from yours. However, a perfect biryani is the coming together of all the ingredients in a smooth as silk experience for the discerning palate. I aim to sell not just biryani but a discerning taste that pleases beyond a plate of rice and meat, such that the entire experience is satisfying and enjoyable. That’s way beyond just filling up your stomach.

Z: To be honest, I’ve never eaten any other biryani. I grew up on my dad’s biryani and I remember how I used to struggle so much with the spice I’d drink three bottles of water with every meal. Over the years my dad has put in so much time and effort into perfecting his recipe, and maybe my ability to handle spice has improved, but if I had to say why our biryani is good, it would be because the rice is cooked to perfection—you can still see all the long grains—and the meat is tender and flavourful. Oh! And not forgetting the raita (yoghurt sauce) that comes on the side of every biryani. It’s a must-have; it just makes every spoonful that much tastier. I’m not the cook, so when it comes to the food, I’m just like every other satisfied customer. 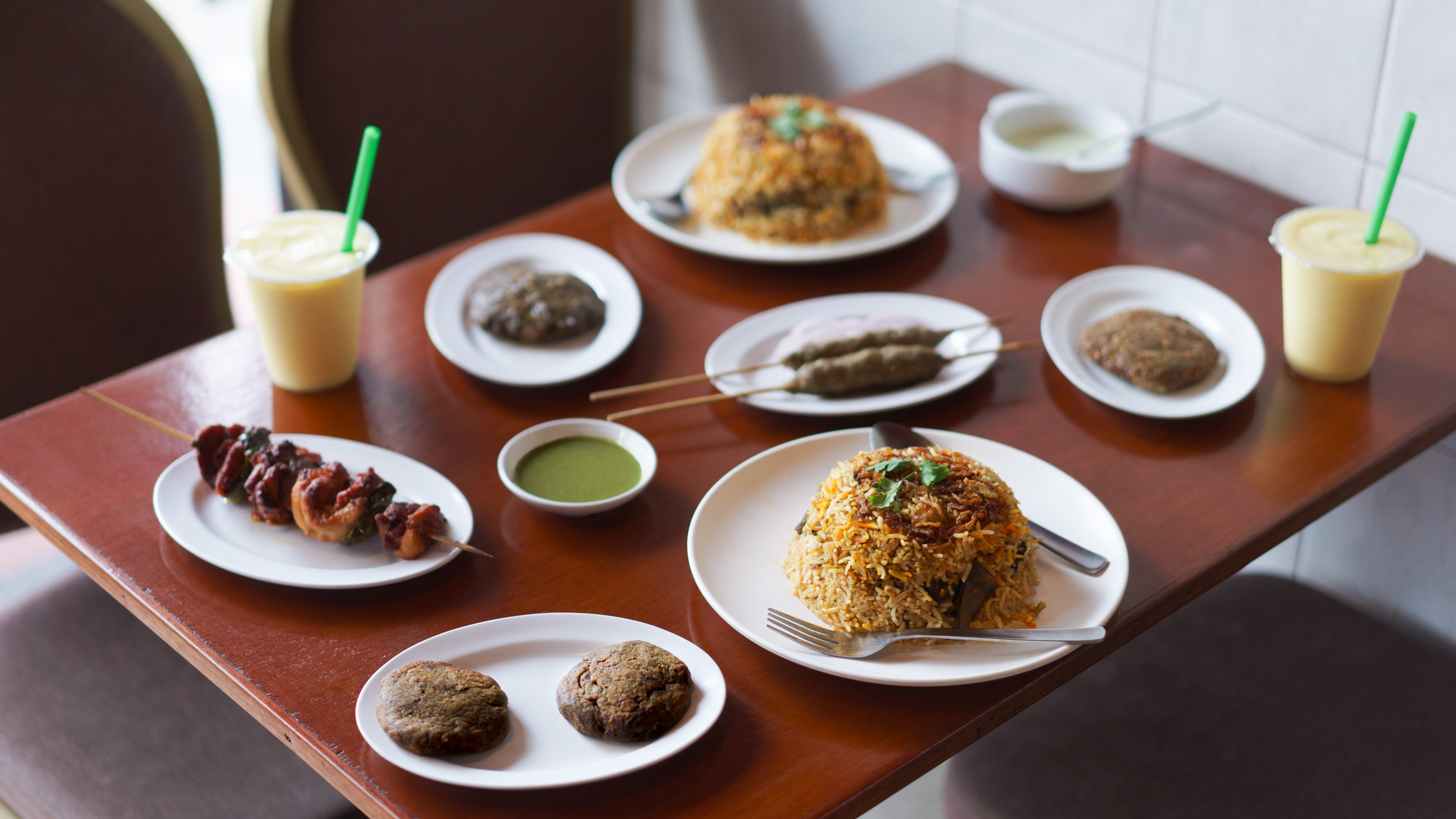 S: Mr. Arif, what are your thoughts on Singapore’s hawker culture? Is it dying out, or do you see it making a resurgence?

A: Good cooks, whether they operate in hawker centres or restaurants, will always be around. However, I think that the old concept of hawker centres will be replaced with quality offerings; the demand for good food will bring in a new generation of cooks (I don’t call them hawkers since they are culinary artists) and food courts will evolve. Hawker centres will evolve too (let’s call them something else, like food zones or something). A whole new generation is seriously concerned with making money and I think that they will make something out of dying hawker centres. There is promise in there, somewhere, since we have a much bigger population to support. My thoughts are that money can be made in any profession, so long as you are ready to turn professional in your offering.

S: Any hopes and goals for the business?

A: Bismillah is already way ahead of my expectations of myself as a cook. It’s up to Zara to make her mark now. My time is up. 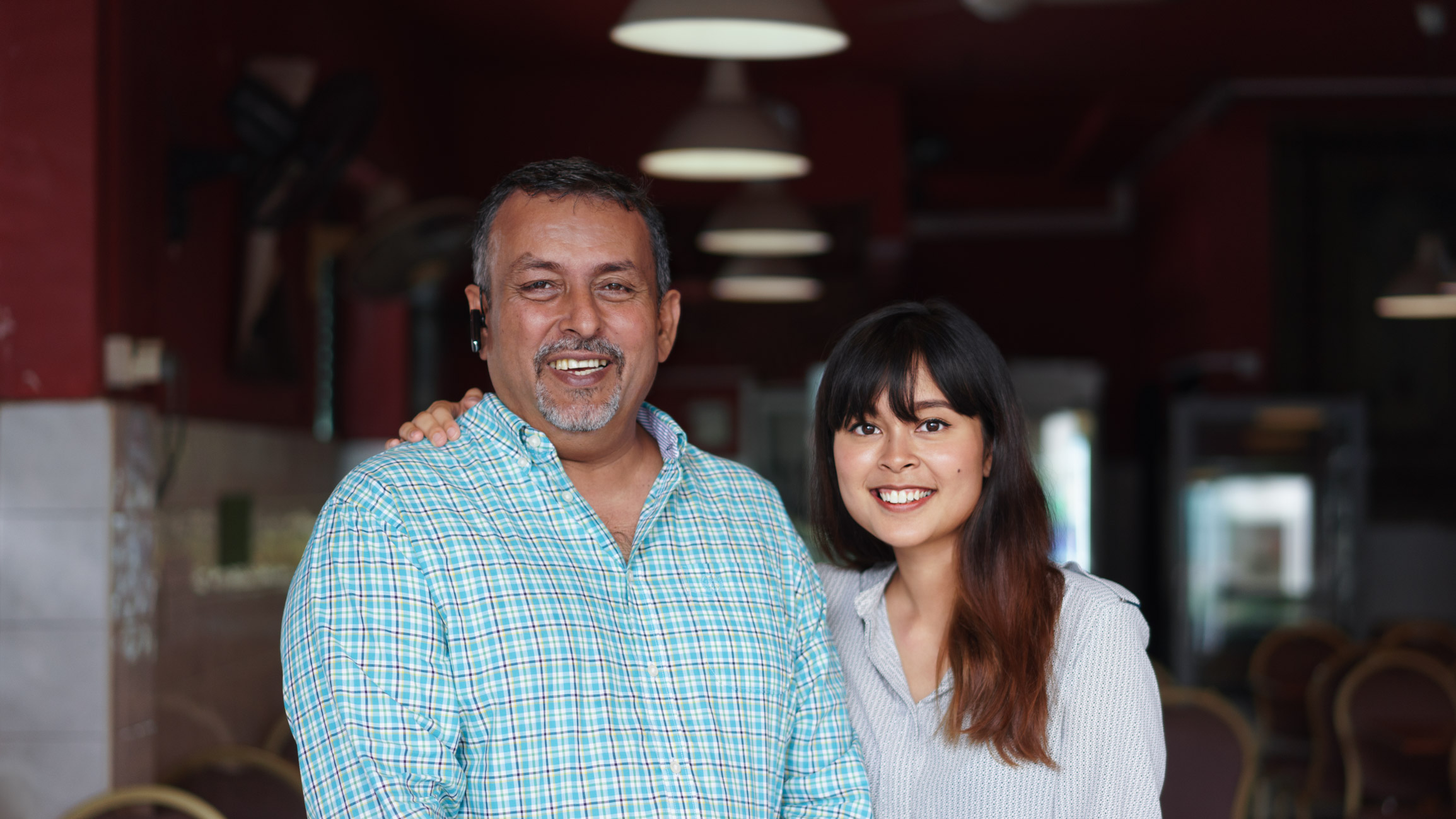