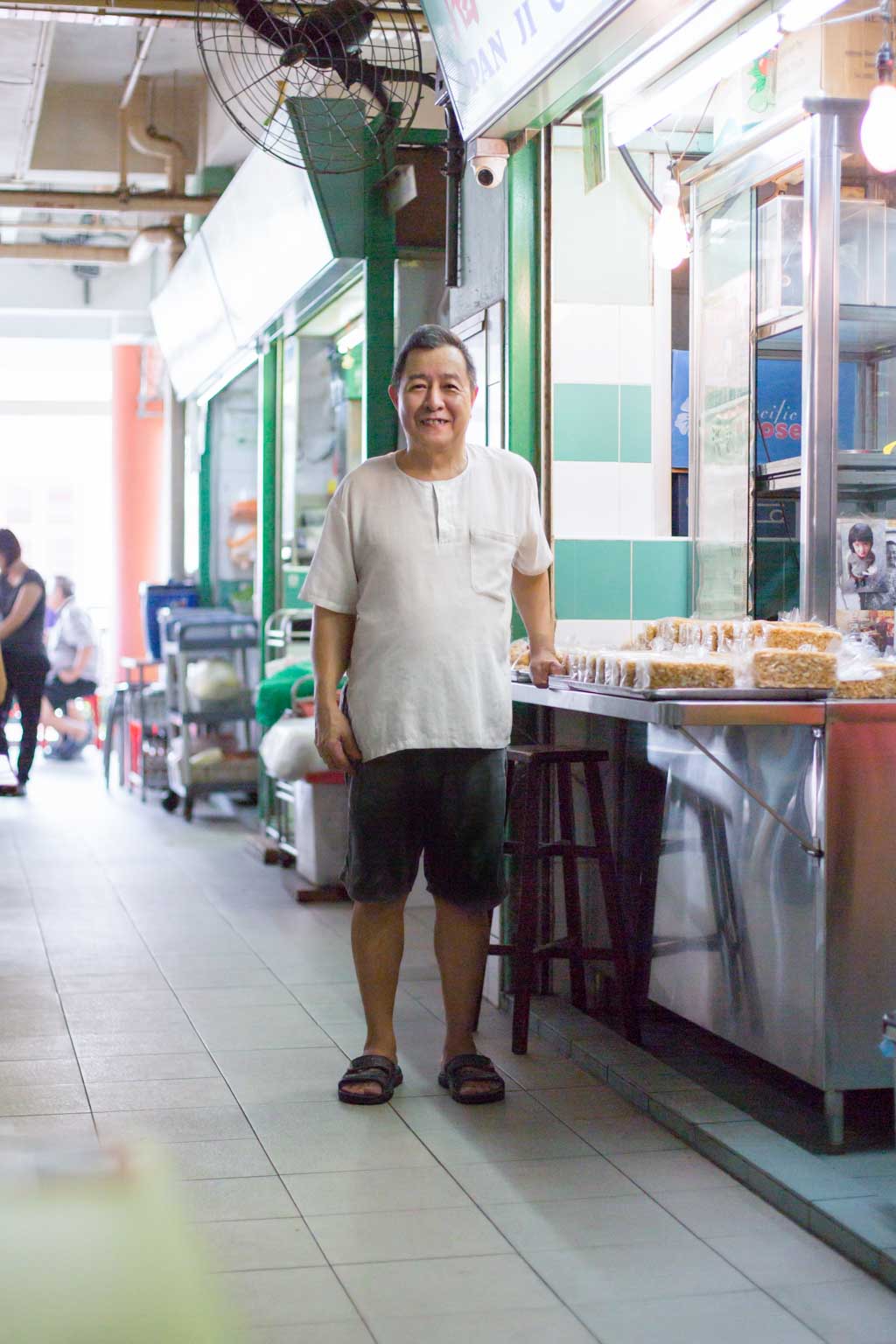 Tucked away in a corner of Chinatown Complex food centre on Smith Street, Pan Ji Cooked Food might look like any of the multitude of stalls that sell everything from roast meats to steamed dumplings. However, what sets Pan Ji apart is the fact that for more than four decades, they’ve made all their many traditional snacks by hand. Their main draw is Sar Kay Ma, which consists of strips of fried dough held together by a syrup glaze and cut into rectangular blocks. Sar Kay Ma’s unassuming appearance belies the fact that making it involves an extremely laborious and time-consuming process, taking up to nine hours spread out over two days. 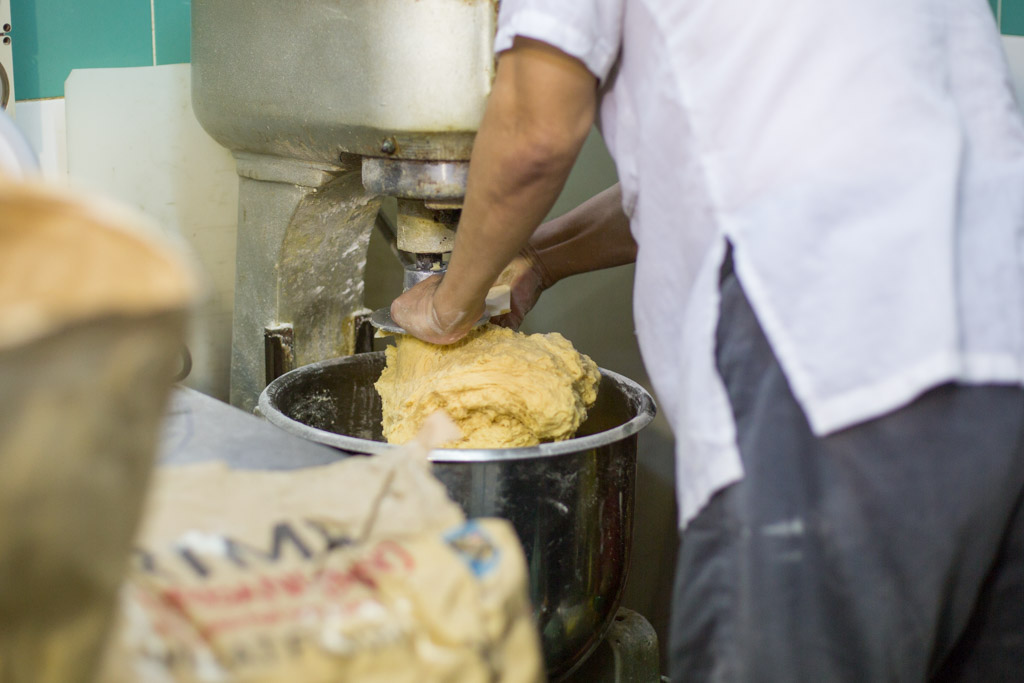 Pan Ji is helmed by the gruff but warm Mr Poon, who inherited the business from his father. Now 62 years old, Mr Poon has been running Pan Ji for more than 40 years, though the store has its beginnings in the 1960s, as a street stall on the neighbouring Sago Street.  As Mr Poon navigates the stall’s small space, going about his preparatory work, his practiced movements demonstrate a mastery of his craft, though what is less readily apparent are the challenges he has encountered on his journey. A birth defect left Mr Poon with a deformed left hand, making it difficult to knead the dough. He is quick to shrug it off when we ask, though, telling us that any obstacle can be overcome with enough determination. We see that he has, in his own way—standing on a makeshift platform fashioned from a wooden pallet, he leans forward, using his body weight to work the dough. Despite his usually reserved demeanour, Mr Poon breaks into a ready smile when he banters with his fellow stallholders in Cantonese as they share conversation over drinks and food. When we ask about his thoughts on the future of the stall, he tells us with a wry smile that he doesn’t have any big plans, and that his only goal is to keep the business going one day at a time. Through his uncertainty, we also hear the same quiet determination that has kept the business going through the decades.

Tell us about the business’s origins—how long have you been doing this?
My father started the business in the 1960s. He was born in Guangdong in China, where he learned how to make Sar Kay Ma from my grandfather. When he came to Singapore in the 1940s, he served it as a snack in a dim sum restaurant here. Later on, as the cost of living rose, people started to frequent dim sum restaurants less. As business declined, he decided to strike out on his own, which led to our first location, a street stall on Sago Street. That was in the 1960s, and we moved here in 1983, so it’s been 35 years since then.

How old were you when you started learning how to make Sar Kay Ma from your father?
I started when I was about 14 years old, when I had just completed Primary 6. At the beginning, I wasn’t thinking of the business seriously; I was just helping out whenever I could after school. Taking over the business wasn’t something that we discussed, it just happened since someone had to carry on the business and I had to find work as I got older. Things just naturally came to a point where I took over the stall, and I’ve been doing this for over 40 years now. 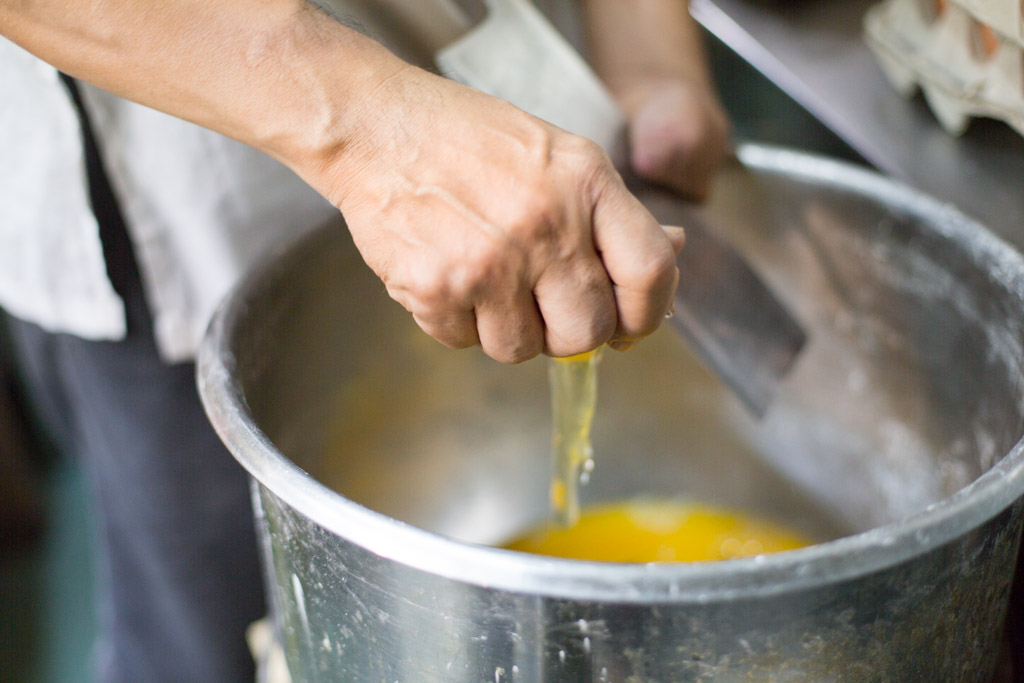 Was it difficult in the beginning?
It was, but you just have to work hard and be dedicated. I started out by helping my father and watching from the side, but over time he taught me more and I gradually did more of the work until I took over. The only way to learn to do something is by doing it yourself.

Tell us more about the process of making Sar Kay Ma.
The ingredients are just eggs, flour, and sugar. It starts with mixing the flour and eggs to form the dough, before leaving it to rise for 45 minutes. After that, I cut the dough into strips and fry them, and then I have to let them cool. I usually leave them to cool overnight, and the next day I’ll prepare the syrup to glaze the fried dough before cutting it into blocks. When it comes to traditional crafts and things that are made by hand, like this, you can’t rush the process.

What are the things you look out for when making Sar Kay Ma?
There are a few things, from the proportions of the ingredients when I’m mixing the dough, to the temperature of the oil when I’m frying the dough strips. These things are hard to describe, it all comes from having lots of experience.

Which time of the year are you the most busy?
I make Sar Kay Ma year-round, but during the Chinese New Year period, it does get a little busier because I also make other baked goods for sale, like peanut candy. 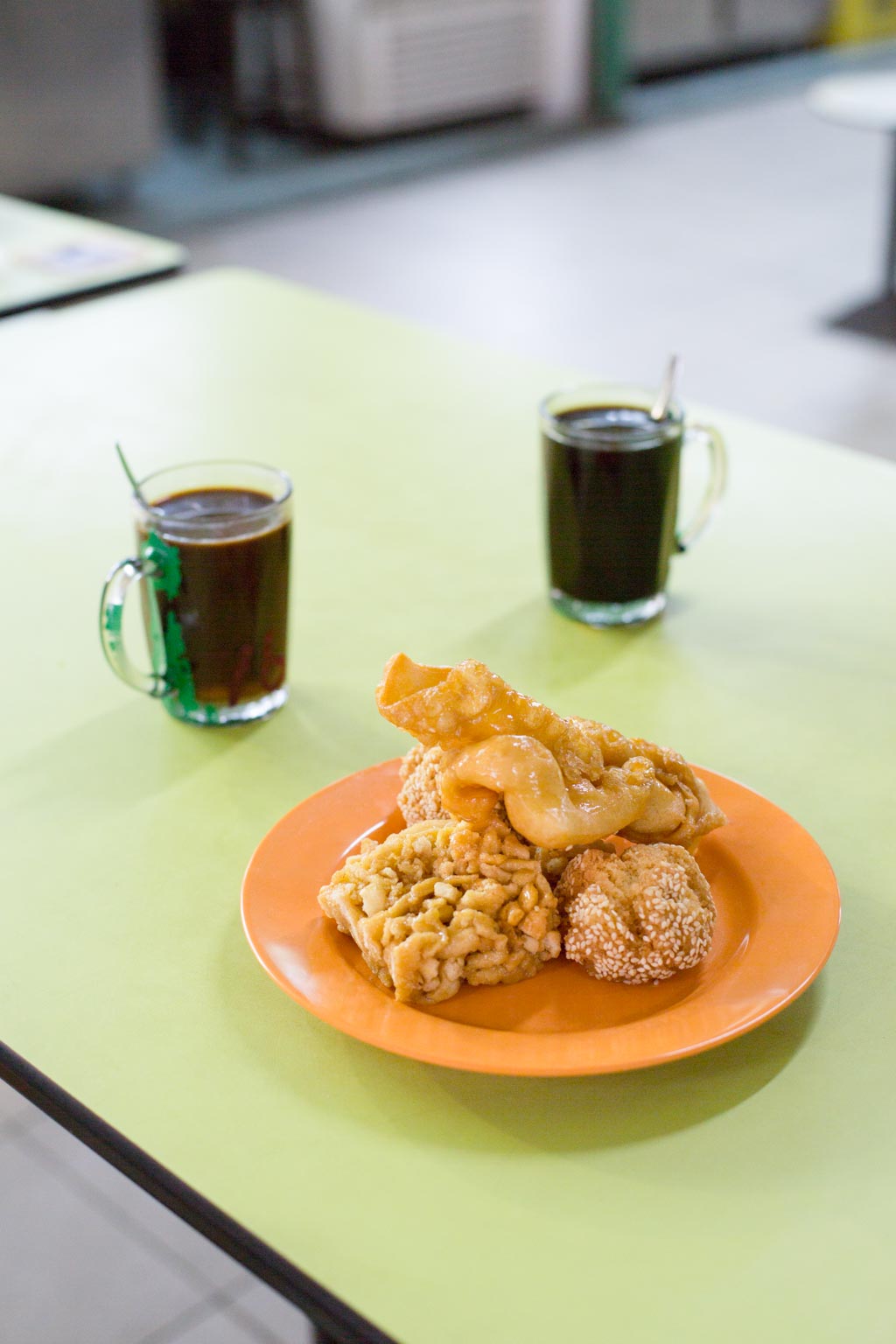 How is business here different from when you were at Sago Street?
Business was better then, because we were on the street. We get less customers here, because people have to come up to the second floor. The location isn’t as good because the stall is tucked away in a corner. Generally speaking, these traditional snacks aren’t as popular as they were in the past. The food culture is different now that people’s tastes have changed, because they have a wider array of choice. Government regulations on hawker businesses were also much more relaxed; back then, you could put together a makeshift stall and start doing business on the street.

What kind of customers do you usually get?
Most of them are regulars. Many of them used to live around this area, but some have moved away. Most of my customers are older folk, but there are a few young people who buy from me as well. They’ve told me that they came to us after they tried Sar Kay Ma from other places and didn’t find it tasty. So many things taste different now that they’re made in factories by machines and not by hand. I’d say machine-made Sar Kay Mar doesn’t taste as good as when it’s made by hand. Of course, making it by hand is a time-consuming and exhausting process; it’s not like a factory when they can put out much larger quantities in a short time. Some manufacturers use powdered eggs or pasteurised liquid eggs instead of fresh eggs, and that makes a difference in how the final product tastes because they’ve been processed.

Have you changed your recipe in the years since you first learned from your father?
No, the important thing is to stick to it and use quality ingredients. Some people try to cut costs by substituting the eggs with water, but we’ve insisted on using all eggs for the dough.

Over the years, have you done anything to publicise the stall?
The young people who buy from us tell me they found out about the stall from TV and online. We were featured by Tuesday Report about six or seven years ago, and K.F. Seetoh from Makansutra, but other than that we haven’t done anything to market ourselves or publicise the business. 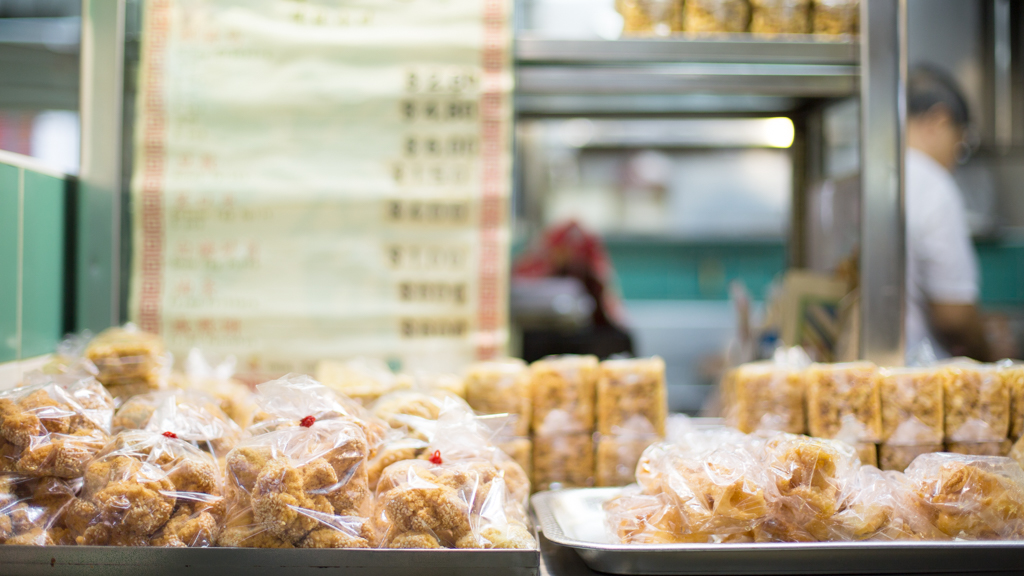 What’s a typical day like for you?
I usually open up the stall at 8AM, and most days I close at 3PM. Sometimes I come in earlier or stay late if there are things that need to be done, or if some items are selling out fast. Take today for example—I came in earlier to start making the Sar Kay Ma, so that it’s ready to be sold tomorrow.

Have you considered looking for an assistant, or apprentice?
Who’s going to do it? Do you want to do it? (laughs) No young person wants to be a hawker nowadays; the work is too tough. You get hot and sweaty from being in the stall all day, so no one wants to do it. 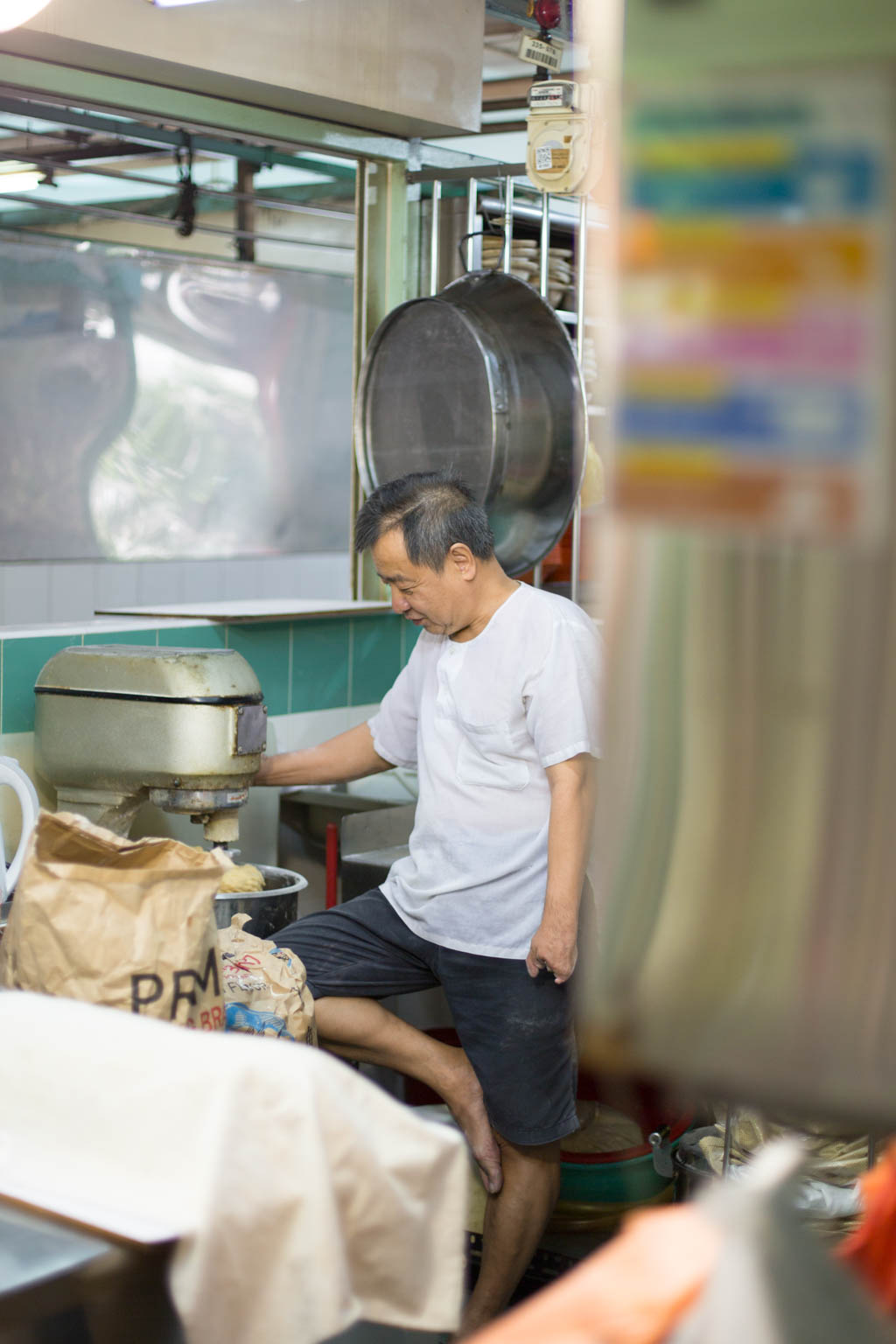 You also make other snacks besides Sar Kay Ma. Is there any which is your favourite?
I like them all, it’s hard to pick a favourite. I like whichever sells better! (laughs)

What are some of the best ways to enjoy Sar Kay Ma?
With Chinese tea, because it’s a Cantonese delicacy.

What about Sar Kay Ma is special to you?
Its taste and aroma. It’s a way of making a living for me, but having done this for so long, you tend to develop feelings for the craft.

What do you think of the local hawker culture, and the loss of traditional delicacies?
It’s not something we can avoid; traditional things will definitely be lost as time goes on. It’s just the way things are; it’s inevitable. Many food businesses that are handed down to the second generation often lose their quality because people often skimp on ingredients, or aren’t dedicated to ensuring the quality stays the same. What’s most important is that you put in the effort. So many things have changed now that everyone prioritises efficiency, and getting things done quickly. In fact, I don’t think there’s anyone else in Singapore who is still making Sar Kay Ma by hand besides me—most of them are in Malaysia now, and it’s all made in factories.

We see that your older brother also helps out at the stall at times. Did he also learn how to make Sar Kay Ma from your father?
We both learned how to make it, but because he worked as a mechanic when he was younger, he wasn’t at the stall as often. Now that he’s retired, he works at the garage when they need the extra help, and he comes to the stall to help out the rest of the time. That helps to lighten my load quite a bit.

Do you have any hopes for the future of the stall?
I don’t think so much about the future; I just try to take each day as it comes. I’m 62 years old now, but I’ll just keep on doing this for as long as I can, as long as I’m physically able. 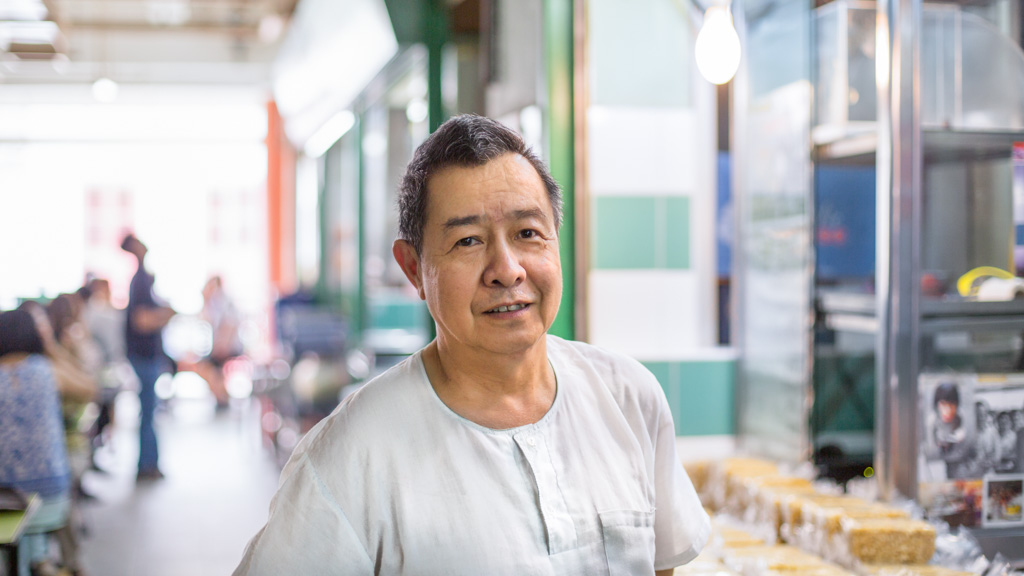