Shentonista Of The Year 2018 — A Song And A Story | SHENTONISTA

A lot can change in a year, but as we caught up with our Shentonista Of The Year winner Samantha, we were glad to see that she’d weathered the ups and downs with a sense of equanimity. While she’s left her previous job as a graphic designer, she still keeps busy with personal projects, and with her side project as a wedding singer, Samantha is doing just fine at turning her creative pursuits into a career. That said, the prospect of working in the arts is one that some parents still frown upon, which made it something of a surprise when Samantha shared that she had a rather strict upbringing. While things changed and relaxed for her as she got older, she credits her parents with instilling her with discipline and drive early on. Samantha shared with us about how her childhood shaped her later decisions in life, the milestones—and mishaps—on her musical journey, and how a good story can draw her in, whether it’s in her fashion choices or her creative projects.

What’s changed since we last met you?

The biggest change would be that I’m actually in between jobs right now—I’m actually about to go full-time as a staff member with my church. It was quite bittersweet leaving my previous job after a year and a half, because I’d made some good friends, but I’m now more confident in my craft, and I’m looking forward to what’s ahead. Besides that, my boyfriend who was studying in Australia is now back in Singapore, and he’s started working here.

Share with us an interesting story from your childhood:
I always had nightmares when I was a kid. I had a very bad case of sleepwalking, so whenever I had a nightmare that someone was chasing me, I’d run around the house, but I didn’t know until my mom told me. I remember that she’d ask me to stay down and suck on ice. Sometimes I’d even run around and talk to my soft toys. 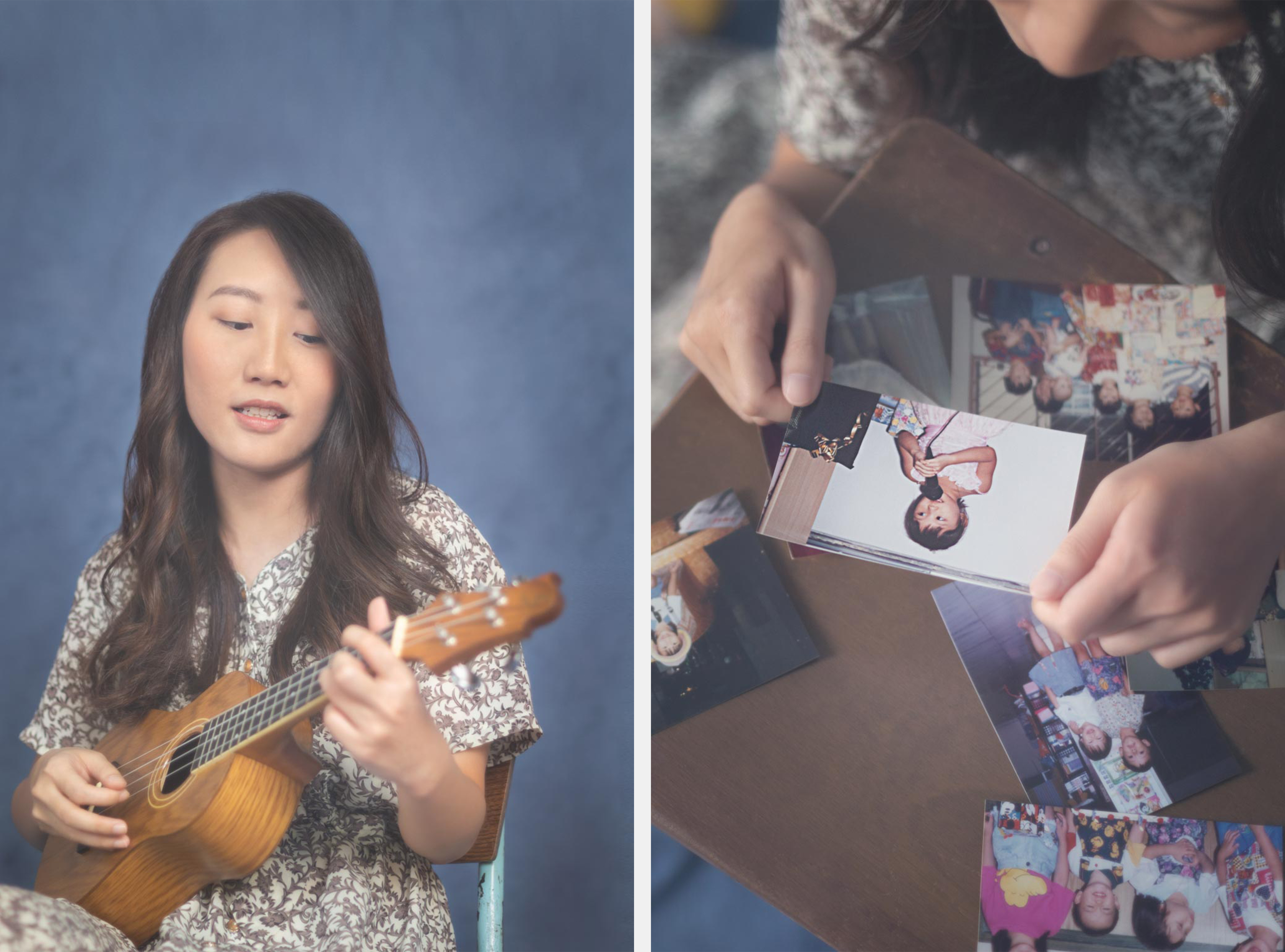 Did you have a dream job growing up? What drew you to it, and is it still something you’d like to try now?
I wanted to be a singer! It’s always been something that I’ve loved doing—ever since I was two or three, I’d always take the mic and sing at family functions or Christmas parties (laughs). I’ve actually tried to pursue those dreams by joining competitions—they were quite trying, but fun. Performing just feels very natural to me, and I feel like I’m in my element when I’m singing. 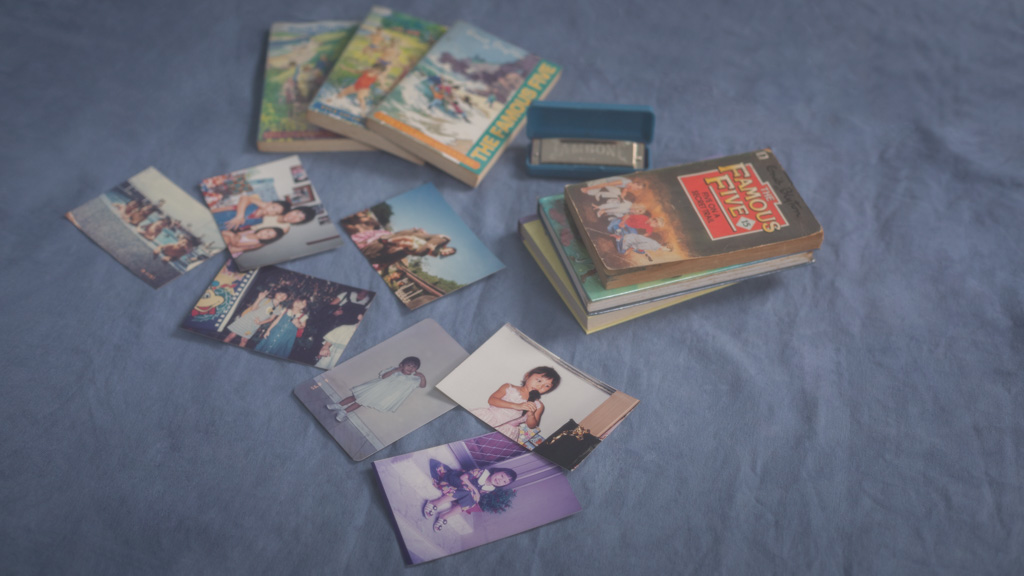 How old are you in the photos you’ve brought along with you? What were you doing then? Can you share with us about a memory you have from that time?
There’s a photo of me on an elephant, I was five or six years old then—this was in Thailand, probably in Phuket. We seldom go on family vacations, so this was one of the few I remember. My mum loved to dress me up and take pictures, so we have an entire series of photos of me in different outfits. Even though I’m smiling, I know I didn’t like the clothes she put me in—I remember hating it (laughs), but looking back now, I have to admit it’s quite cute. 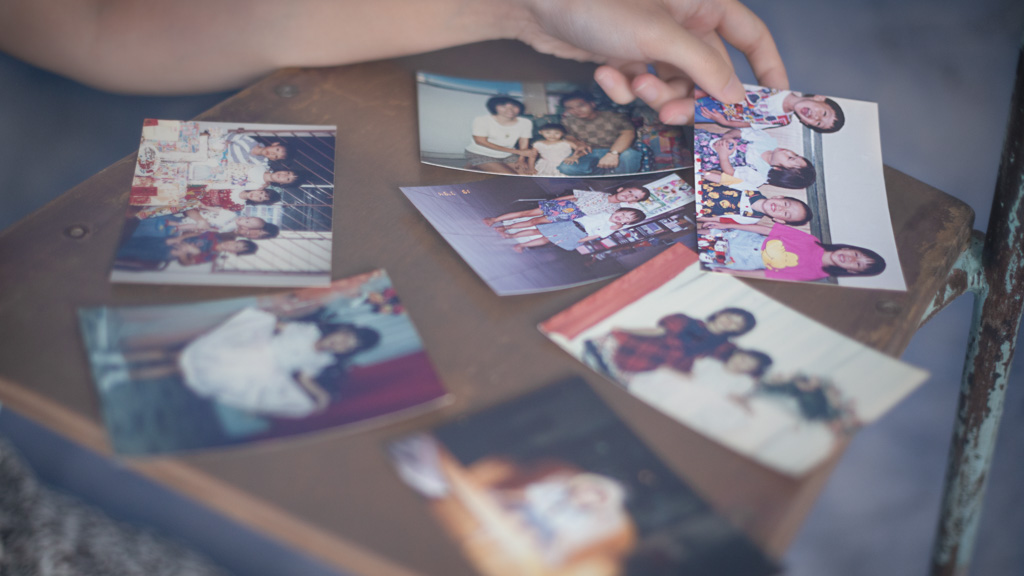 If you could meet your younger self, what would you tell her?
To not to have so much fear! I think I was very fearful as a kid—of others’ expectations of me, and their judgements. Looking back, those things don’t really matter; I wish I’d really pursued my dreams instead of worrying about my future. My mum was a tiger mum, and being the oldest child, I definitely grew up facing a lot of expectations.

What are you nostalgic about?
I really miss hanging out with my cousins. I have three cousins who are around my age; we would stay over at each others’ houses and hang out, but we’re not as close now that we’re older. One of them is actually jet-setting around the world, we haven’t seen him in a long time but I think he’s in Nicaragua now, after travelling through Canada and down to Mexico.

If you could change one thing about your past, what would it be? How different do you think your life would be now?
I wish I was a bit more playful, because I was such a rule-abiding kid. I actually liked going to the playground as a kid, but I wasn’t allowed to do that because my mum would have me do assessment books. If I’d been more rebellious, maybe I wouldn’t have to unlearn many of my behaviours now. As a result of my upbringing, I have a tendency to mull over things before I do them, so maybe being more rebellious would have helped me let loose.

What are some traits you’d like to pass on to your children, or that you’d like your children to have?
I’d like to instill the right amount of discipline in them, but also balance that with play. My mom did well at making me a pretty disciplined kid, and I do think that discipline and hard work brought me where I am today but if I were to do anything differently, it’d definitely be to  provide more freedom. I think it has to be both—too much discipline and no play makes you very rigid, but too much play and no discipline means we can’t be the best version of ourselves in life. We might have the potential to do well but without discipline, we won’t have the push we need to succeed. 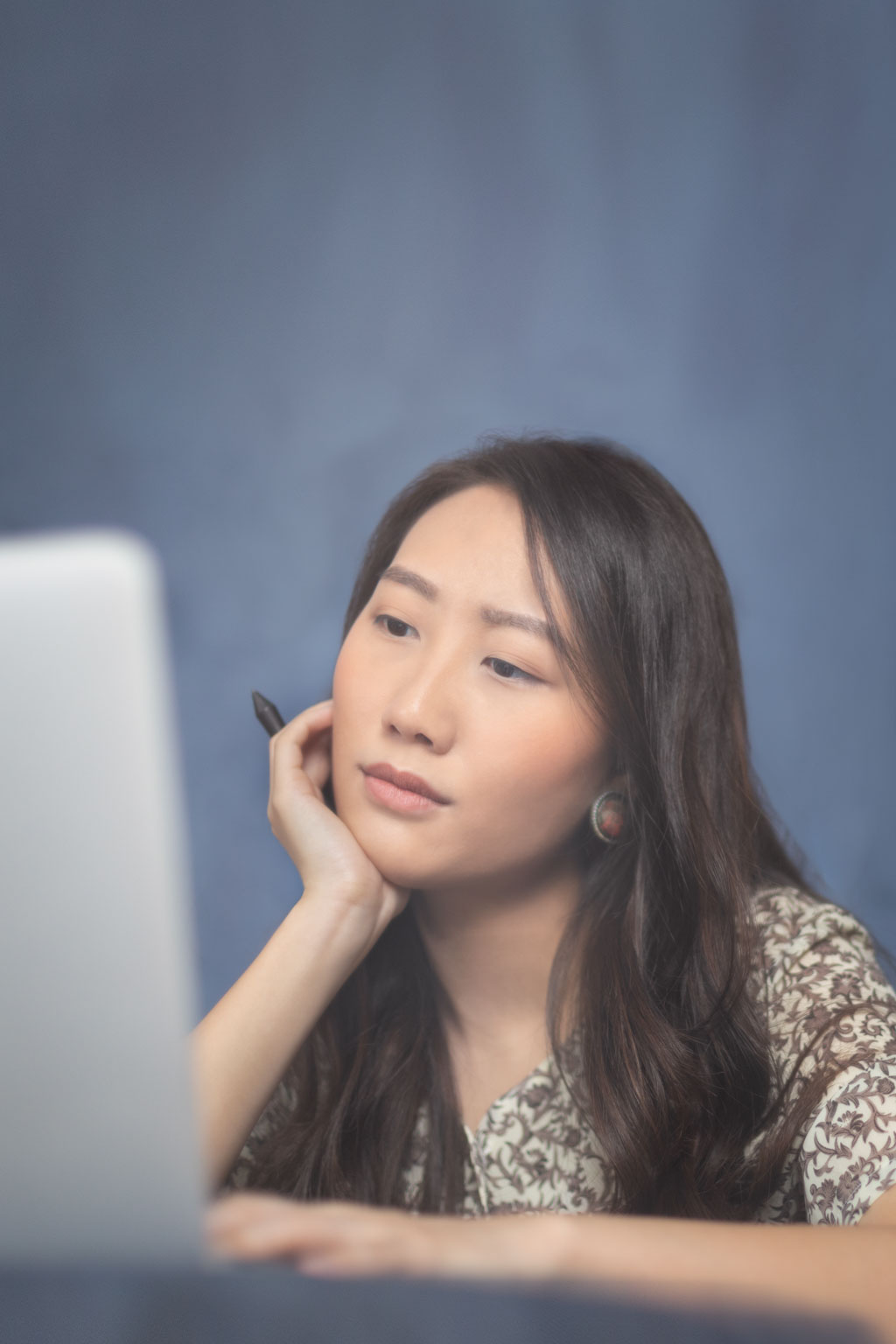 As a graphic designer, where do you draw inspiration from? How do you deal with creative blocks?
One of the things I worked on at my previous job was to design menus, and one place I went to for inspiration was a site called UnderConsideration, which was run by a graphic design and branding firm. I also like visiting museums to check out exhibitions or shows—the Yayoi Kusama exhibition at the National Gallery in 2017 was very memorable, and I enjoyed visiting SFMOMA (the San Francisco Museum of Modern Art) as well when I went to San Francisco. With creative blocks, well, if I’m at my job, I just have to do it (laughs). But when I’m working on a personal project, then I like to go somewhere quiet and just be by myself. Sometimes I go hiking, I feel that’s quite a nice way to get some peace.

You told us previously that you sing at weddings with friends as well. Can you share a memorable story from a wedding you’ve performed at?
Once, my band and I were performing at an outdoor venue. Right in front of the designated spot for the band, there was a pond with an umbrella. We had a music stand in front of us with an iPad and my phone on it, and in the middle of the set we tugged on something, and our whole music stand fell into the pond—right in the middle of a song! (laughs) We silently prayed that no one noticed and we finished the song, and after that we picked the stand and iPad up, but it was only after around two minutes that I realised my phone was missing. And then I saw this light shining from the pond and I realised—that’s my phone! At the end of the wedding, the groom came up to us and told us he saw what happened, and asked us if everything was okay. It was possibly the worst thing that could happen, but it was quite an interesting experience.

Are there any songs that represent you, or capture a period in your life? Why?
I’m a big fan of Joss Stone, and one song of hers I really like is called Right To Be Wrong; it’s a great song and the lyrics are very memorable. There’s also this other song I listened to when I was going through a very tough time—it’s called Alpine, by a local artist called Linying. I listened to that song a lot when I was in a low period, and the songwriting and abstract imagery remind me of Bon Iver.

The most ridiculous outfit/style you’ve tried as a teenager:
When I was in secondary school, I was in a circle of female friends who were all athletes, and they all had short hair. Because I was in that clique, even though I wasn’t an athlete, I still cut it in that short style—and I regretted it (laughs). After I cut it, I realised it didn’t suit me, so I wore a cap to school, and this naughty boy asked me why I wore a cap to school and flicked it off. Both of us watched the cap fly, and as he looked at me and I looked at him, I burst into tears. (laughs)

You shared with us that your personal style is simple, with a touch of bohemian flair. What’s the biggest fashion risk you’ve taken? Are there any outfits you’ve regretted?
I think the biggest risk I took is wearing vintage actually. I know I’m wearing it now but it was only after I went to design school that I felt I could wear whatever I wanted. That was when I found that I really liked old pieces of jewellery or printed clothes. There was a bunch of students in design school that always wore black and white and minimalist clothing, but there was also another camp which wore very bright colours, and I really liked that. Looking at vintage clothing, you get the sense that it’s weathered through something, and there’s a story to it. 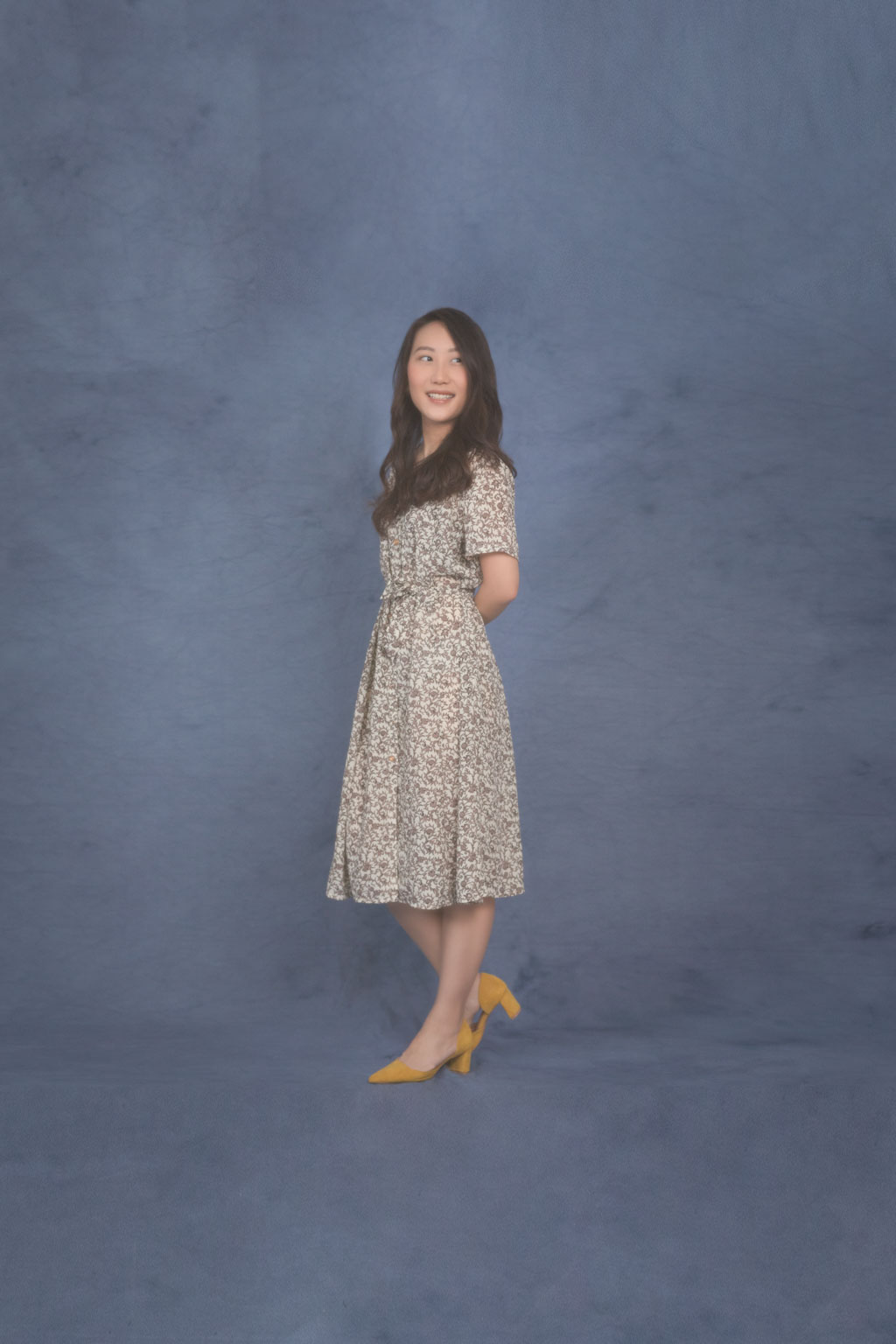 Special thanks to our wonderful clients who came on board to support us for SOTY: Oasia Hotels & Residences, FRANK by OCBC, Freedom Yoga, and Starchie.