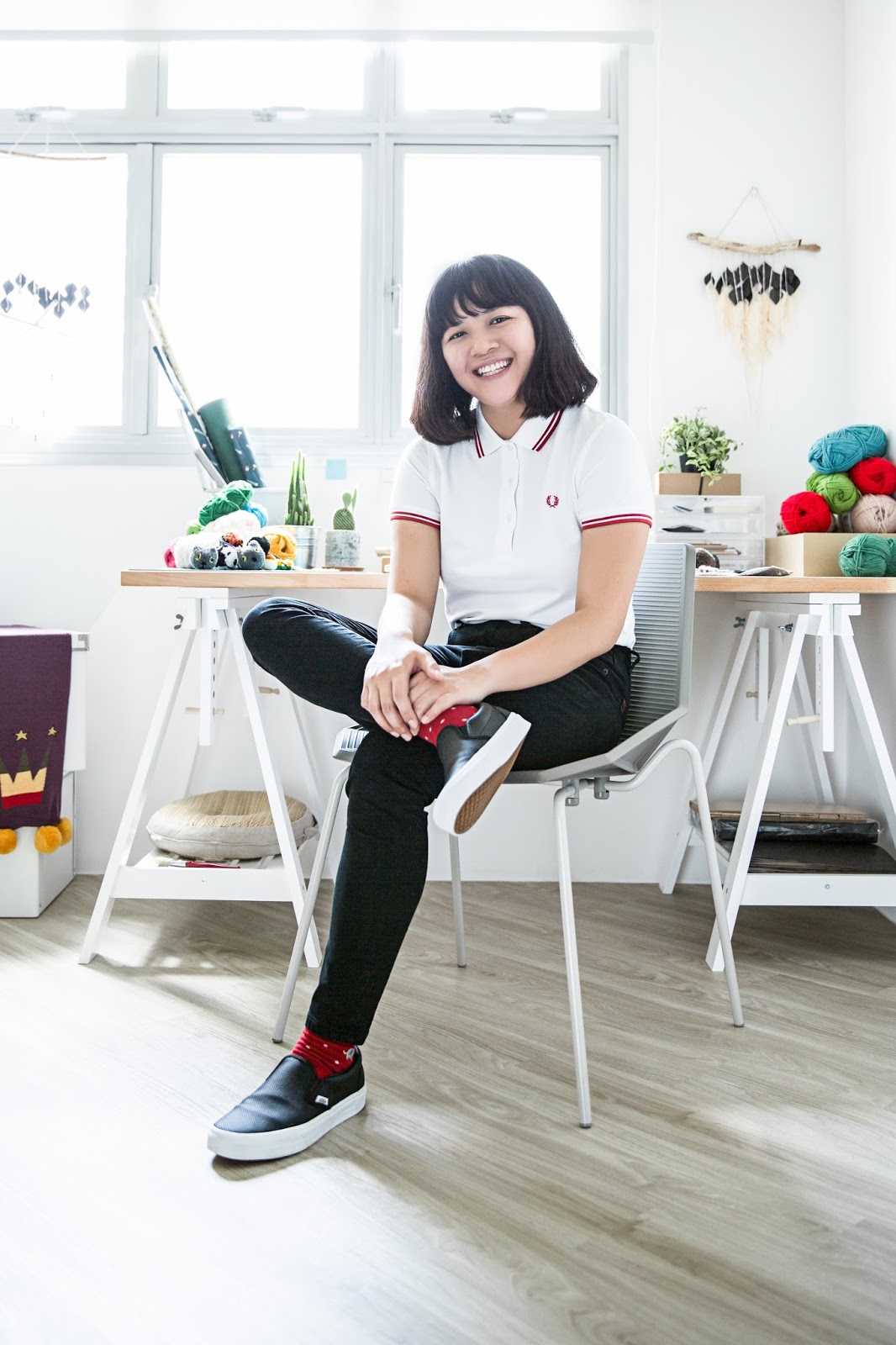 Melly has been running her own online business, making and selling fun pom poms and leafy hanging mobiles on her Etsy site, for about two years now. “That’s what I do now, besides being a housewife!” she laughs. “I’m quite domesticated.” Melly and her husband — who was her then boyfriend — started their own web design business for clients in 2007, with Melly doing the 2D work and putting her background in graphic design to good use. In her spare time, she kept busy by making prints, doing embroidery, and silkscreening Christmas cards, before she started picking up twigs at West Coast Park and fashioning them into the mobiles she still sells today. When her husband developed an email marketing app that took off, and decided to focus on that instead, Melly says she found herself out of a job. “I didn’t know what to do! I think I took a year to figure it out. I read and slept a lot.” That’s when she started looking for something new to make, and stumbled upon pom poms. “I tried making pom poms to actually put them on headbands. That was the initial, first product I put out there, but they flopped,” she laughs. “I could make pom poms pretty well by then, so I started to make them into fruits and they were better received. So now, whatever people like, I try to make.” We visited Melly in her new home and found out more about how she works and what she likes at the moment. 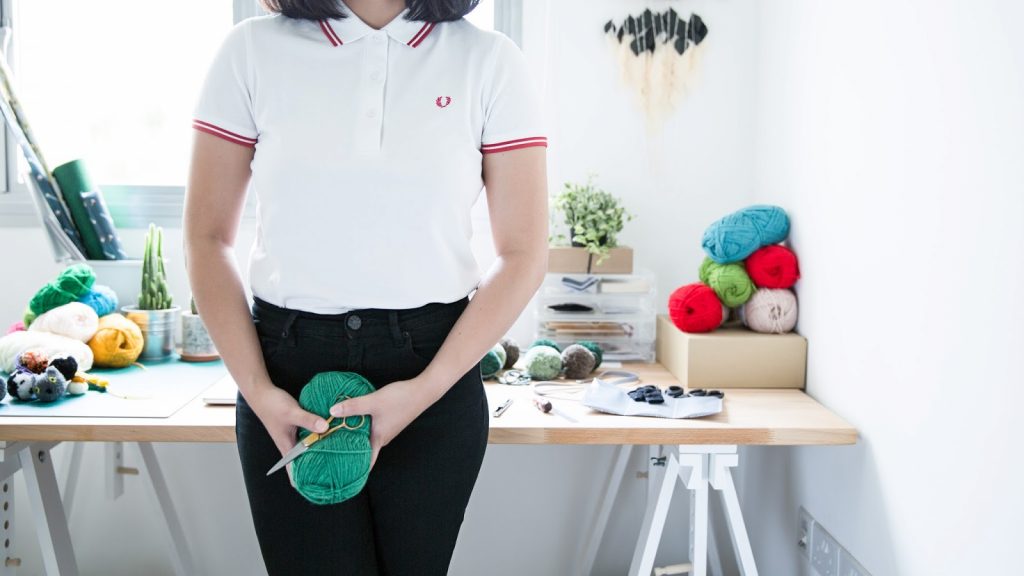 1. How does a typical day go for you?

I wake up very early, like 6.30am, 7am. I clear the cats’ litter. (Melly and her husband have two cats, named Fat Boy and Indie.) We used to be nocturnal, when we did our web design business, so it was very unhealthy. My husband fell sick, and had hyperthyroidism, so he became really thin, although he says it was the best days of his life. After that we tried to pay more attention to our body, so now we’re quite health conscious and we work out three times a week. We either run or do exercises at home. So it’s coffee, shower, check some emails. I try to cook lunch. From 1pm until 5pm I would be working on stuff. Then either make dinner or go out for dinner. Very homely. I don’t really have a fixed schedule, but definitely up by 7am and in bed by 10pm on weekdays. That’s the only routine.

2. Could you tell us about what you’re working on right now, or a project that you would love to undertake?

I’ve just finished making some pineapple tart poms, and I’m supposed to figure out how to make even bigger pom poms. I collaborated with this girl who makes pots, and I helped to make the poms for her little pop-up at The Little Dröm Store. She was my first collaborator. I like her work ethic; she’s very easy-going, and I admire her designs. I don’t mind doing more collaborations, but I just don’t have anybody in mind right now. I’m open all the time — hopefully someone that I know, and that I admire. 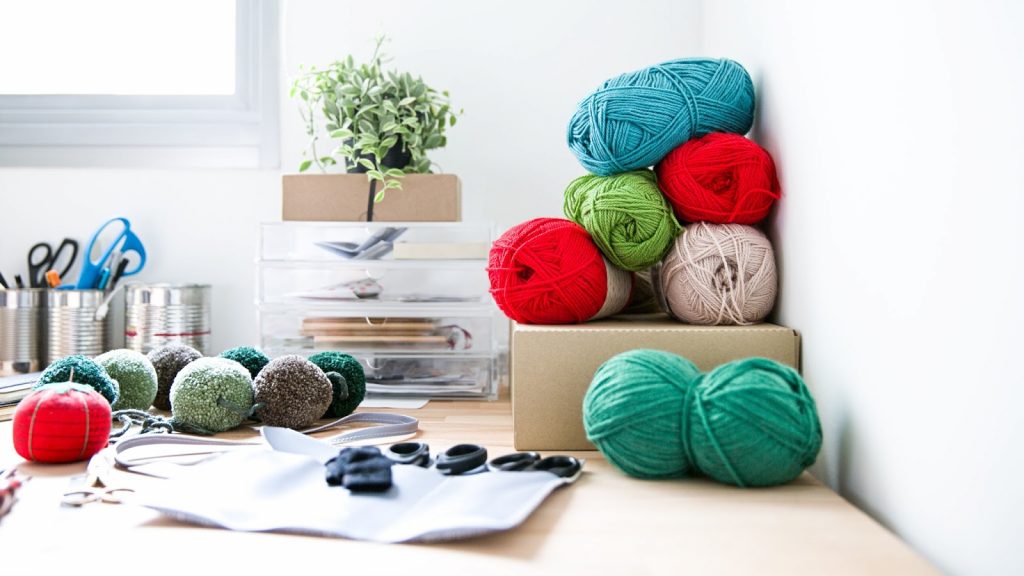 3. What is the best and worst part of being a craftsperson?

The best part is making something tactile, that people can hold, and use. The worst part is that a lot of it is very time-consuming, which means that I can’t make a lot. To not be able to meet demand is sometimes quite sad.

4. What does individualism mean to you?

Being your honest self, especially when tested.

5. What is your working/creating style like? Are you neat and organised, or more free-flow and messy? Do you have a system/routine in place when you get down to work?

I used to be messier but I’m super organised now; I label everything and I’m very tidy. No more things like “I might use it next time?” 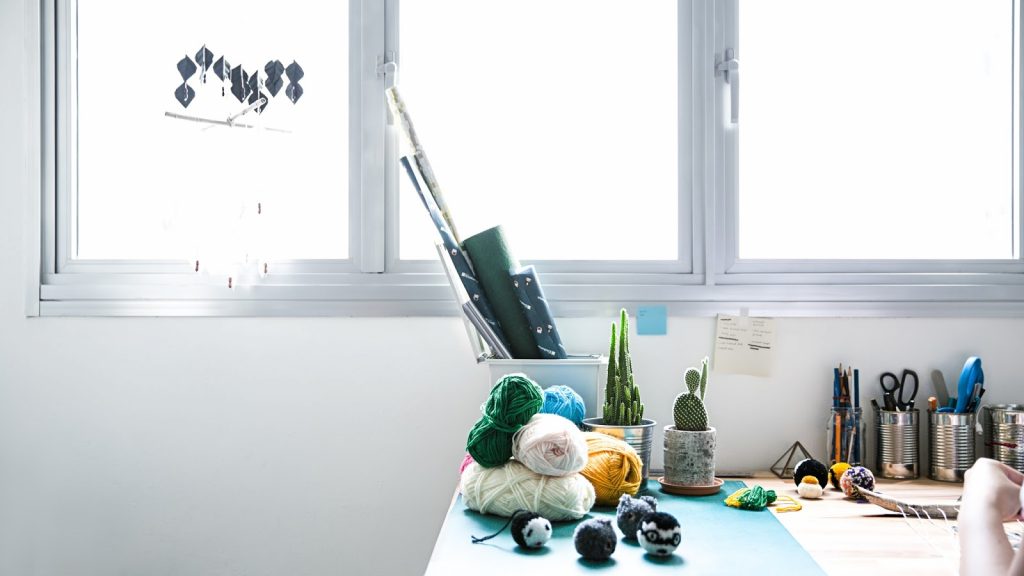 I had a hard time thinking about this, because with Instagram you get to know — I mean not really know — but you follow real people. But for an icon, I would have to say Wes Anderson.

7. What are the three things/tools you use most often at work? Or, what are three items in your workspace that you can’t live without?

Definitely scissors, my pom pom maker, and a penknife. Oh but my ruler too! That makes four.

8. What would your ideal workplace be like, in terms of the actual physical space and working environment? When you were planning the room, were you putting everything that you wanted into it?

Yeah, I mean, if I could have the whole room to myself, and my husband would not be there. There’s never enough space, basically. 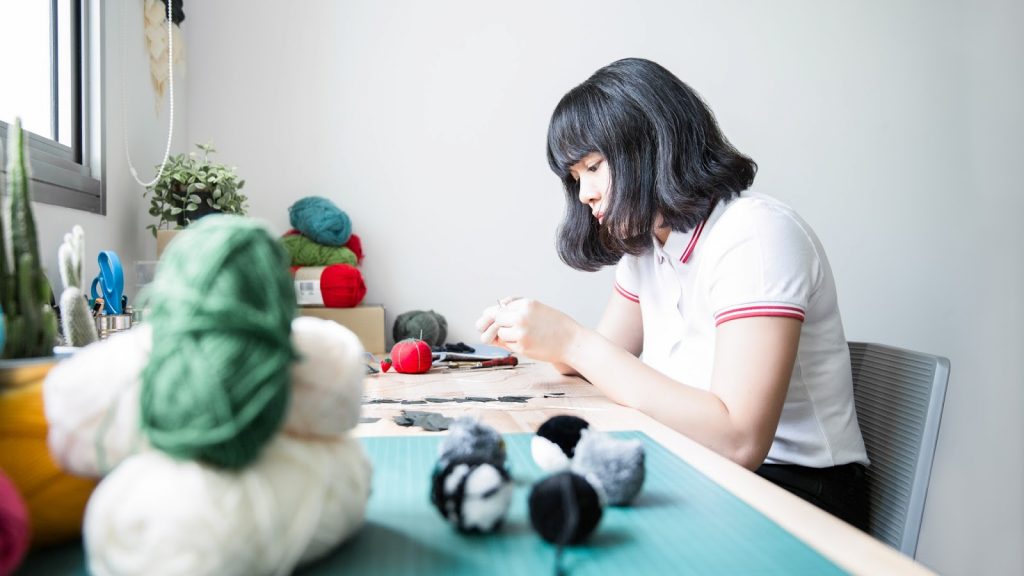 I have this cardboard box that I used as a big dustbin for when I’m cutting my pom poms. I have to sit on the floor to do that. I wish it was something more permanent, maybe made out of wood and not so makeshift. And maybe a proper, low chair, because I have to be on the floor and my back hurts like crazy after. That set-up is definitely very makeshift and I just can’t find a way to make it more non-makeshift yet.

10. Do you have one person you dream of working with, and why?

Yes, but she’s totally out of the realm of what I do. She’s a woodworker by the name of Ariel Alasko. She’s amazing. I don’t want to say it’s because she’s a woman, that’s why it’s so cool that she’s working with wood, but it is just so cool.

11. If you could wear a uniform of sorts for the rest of your life, what items would the outfit consist of, and why?

A black sleeveless top in jersey, or a striped top; high-waisted denim shorts or jeans; and sneakers.

12. What do you think are some wardrobe staples that everyone should own? 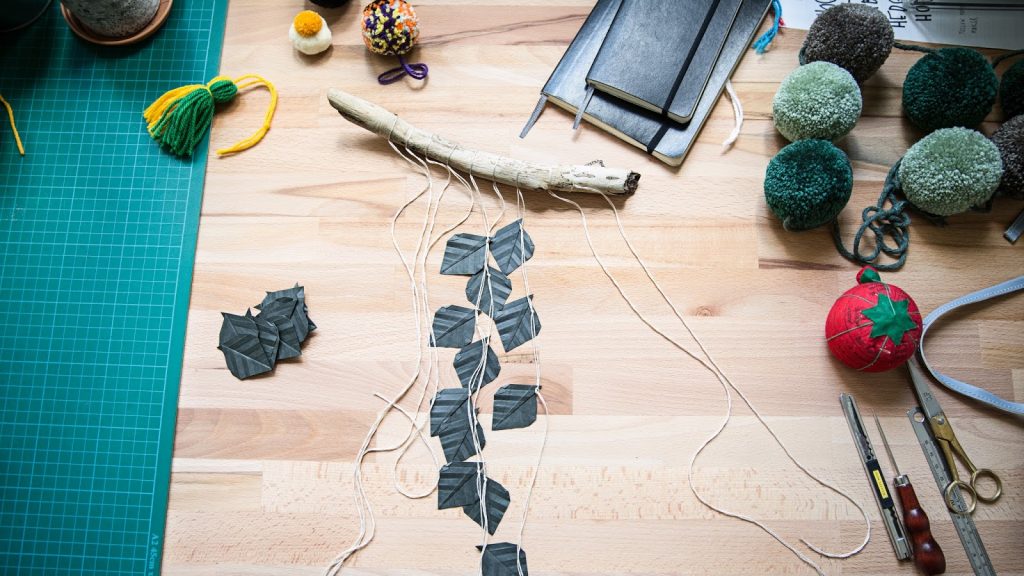 13. What/who are you listening to right now? What kind of music do you listen to when you work?

Right now I’m listening to this lady called Sharon Van Etten. I found out about her from one of the magazines I read. Her music is a bit haunting, similar to Rachel Yamagata. Her story is quite cool — she didn’t intend to be a musician, so I was quite attracted to that. My husband always plays his Spotify playlist with a lot of indie music, and a lot of times I don’t know who I’m listening to but I still like it.

15. If you were asked to curate a music festival, which three musicians/bands would you headline? 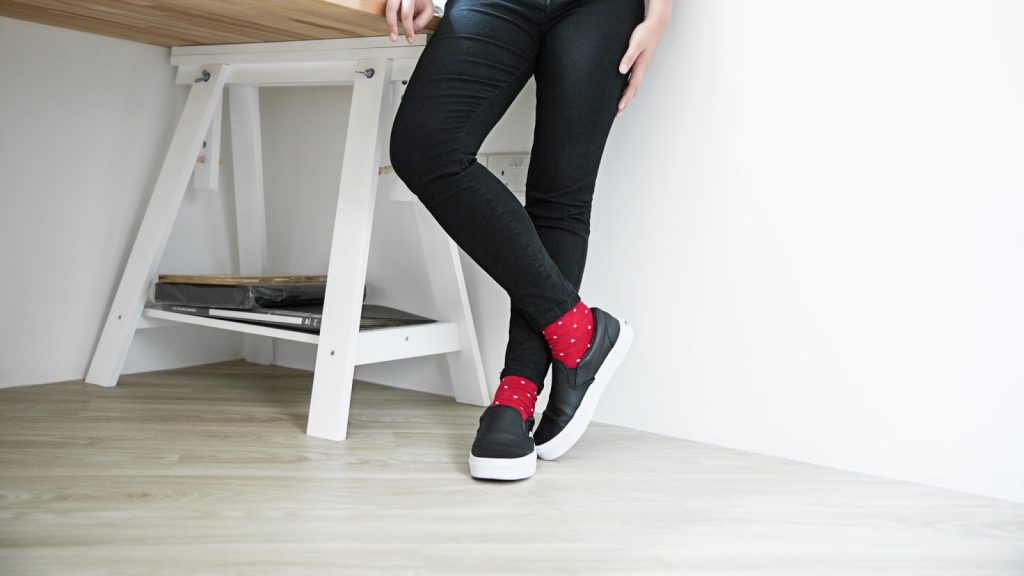 16. What’s the one thing you think you should be doing more of, or that you wish you had more time to be doing?

Probably spend more time with my family. My parents stay in Bukit Batok, and we just moved to Sengkang. I feel weird to call them just to hang out, so it always feels like there needs to be an occasion. I wish I was more cool about that so I could see them more.

17. What would you do if you weren’t doing what you are doing today?

I’d want to be a farmer. I think now, when we live in this high-tech kind of world, we always want the opposite — to slow down. So I think that would be very nice.

18. Any personal mottos, quotes, or philosophies that you’re living by right now? 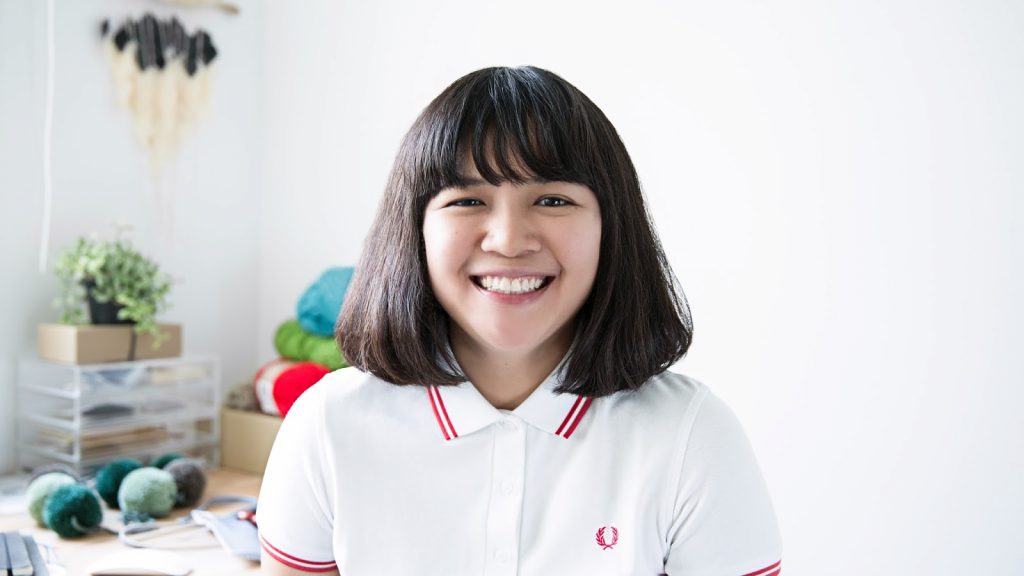