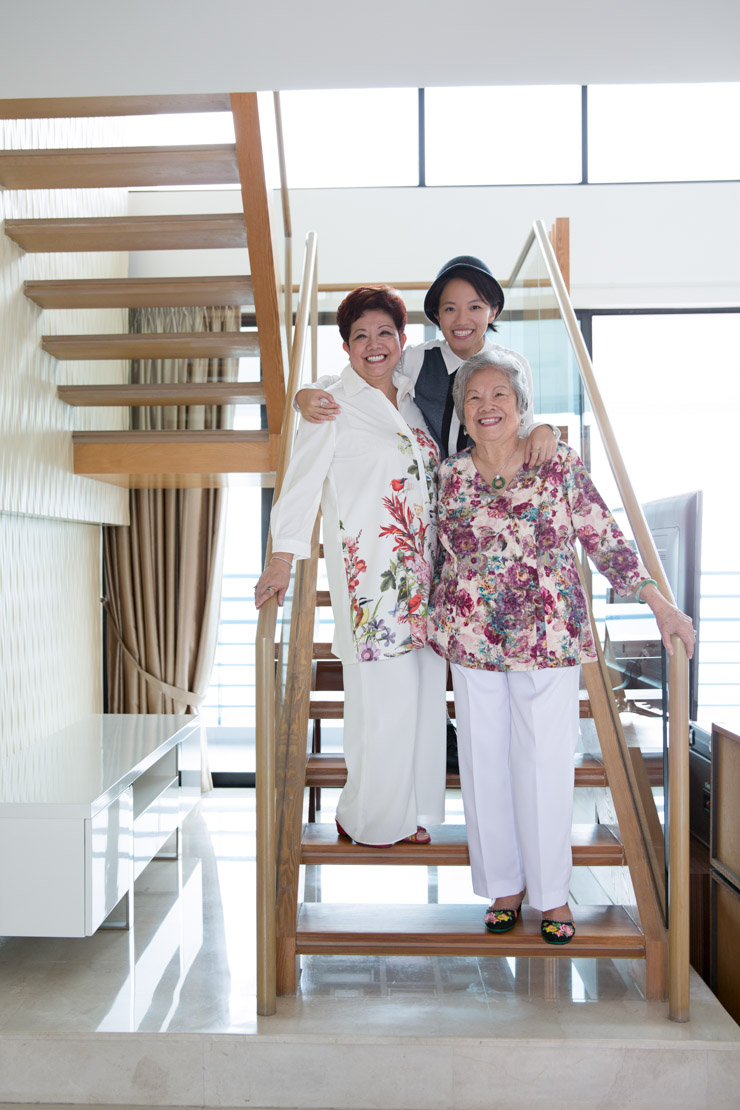 Shu is a “ball of energy”, as her mother describes her, and this is never more evident than when she’s at home in the company of her loved ones. Chatting in Cantonese with her grandmother, and switching between Chinese and English with her mother, she was constantly running about and making sure that the two older ladies were comfortable and happy in front of the camera. It even turns out that the trio consulted each other on what to wear for the shoot, so that they could be as coordinated as possible — one happy family, indeed.

Shentonista (S): Would you say that your style has been influenced by your mother in some way?

Shu (Sh): I think to certain extent, yes. My mom is a big fan of colours, and since young, I’ve learnt to embrace colour and never really shied away from them; I was never a monochrome kinda girl. Unlike my mother who has a preference for reds, pinks and purple, I do fancy a cooler and more earthy palette. My mother is also obsessed with leopard prints — she can literally be dressed in leopard prints from top-to-toe. When I was younger, like 7-8 years back, I got influenced and bought a leopard-print cross-body bag (my mom has the exact same one in a bigger size) and a pair of suede leopard-print brogues.

S:What are some of your mother’s pieces that you really like?

Sh: While I am not a fan of her clothes (too flamboyant!), I do like her accessories — jewellery, bags and all. I stole this navy high-wasted belt from her and I kept the briefcase from her working days, from a good 35 years back. My popo (grandmother) has some really cool harem-ish pants that I’ve always wanted to steal, but they’re too big for me. I like it when my popo wears bright florals. 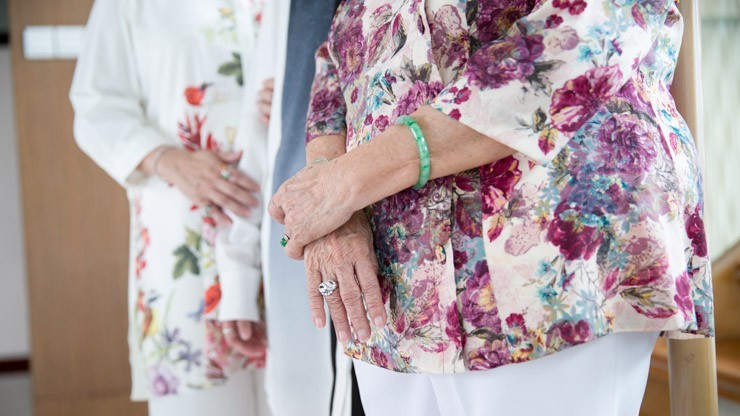 S: Can you envision your mother in a different look/style?

Sh: Sometimes I picture her to be more less tai tai (a flamboyant housewife); more cool and composed, more chic in a way, you know — all black and white shift dresses instead of suits made of either batik or coloured silk (her standard uniform). But then again, I realise that’s really limiting who she is because she’s really quite the gregarious character. Her personality matches what she wears to a tee.

Shu’s Mother (M): Yeah, I don’t really wear black and white, or colours that are too dull. Perhaps I’m old-fashioned but I feel that those sombre colours are reserved for wakes and funerals. I also have a preference for billowy bottoms as I can be quite chor lor (not so dainty) and these are more convenient to move in.

Shu’s Grandmother (G): (chimes in suddenly) I feel that her pants can be more tapered. Might look more modern! And yes, I don’t like dark colours too. I like florals — big florals. Florals that are too tiny make me look a bit big.

Sh: Yes, all the time, even now. Before we go for a function — a wedding dinner, for example — we’ll definitely consult each other. Even when I’m shopping overseas, I’ll sometimes send pictures to my mom and ask for her opinion. What I love about my mother is that she, like me, has no filter when it comes to voicing her opinions. If it’s really ugly, she’ll tell me. I will usually heed her advice but if I feel strongly for something we’ll seek a second opinion from popo and if the old dame gives the green light, I’ll get it. We’re a really close trio.

S: What do you think of Shu’s dressing?

M: (laughs loudly) Actually, I think it’s a little strange; she mixes and matches everything and anything. Some days she’s very feminine and quite classy — usually during wedding dinners — which I like; somedays, she looks like a beggar. She also seems to be immune to heat; she’s always in long sleeves or in layers. Sometimes, I feel the heat just by looking at her. 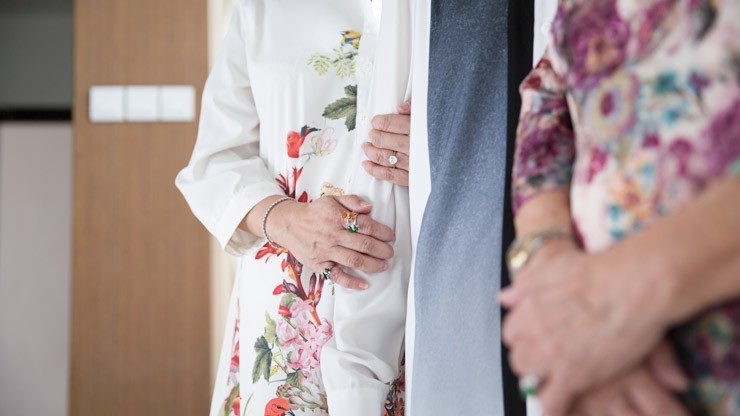 S: How do you think Shu’s dressing has changed as she grew up?

M: When she was younger, she had a phase when she was a total tomboy and didn’t really care about what she was wearing; people were asking me if I had 3 sons. As she grew older, she gradually became more girly. I also feel that her dressing is quite Japanese-influenced now, perhaps because she’s been studying Japanese for a long time and was living in Japan. People often mistake her for a Japanese now.

S: Is there a certain way you would like Shu to dress? What do you wish that she wore more of?

M: Not really, but I do hope to see her in more feminine combinations.

S: What is one piece of clothing that Shu wears that you don’t really like/don’t really understand?

M: Too many. I don’t know how she wears her clothes, it’s very… strange. (laughs) But not really in a bad way, just interesting.

Sh: My mother hates this black Comme des Garçons skirt that I have, she calls it the “garbage bag skirt”.

G: But I like it, so don’t worry. The fabric quality feels quite good. It’s interesting. I also like that skirt of yours with the tulle and butterflies! That’s my favourite.

Sh: My popo is more receptive of my so-called “weird” fashion choices. 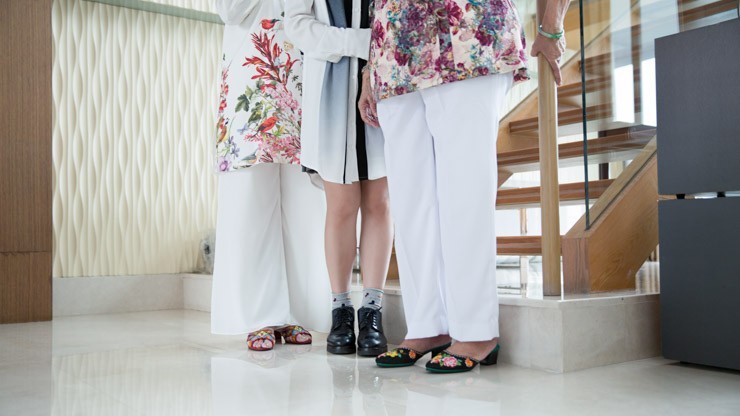 S: What is something you’ve learnt from your time at work that you would like Shu to know?

M: Punctuality is key. Don’t be late, and don’t dishonour your promises. Also, even when you’re late, don’t give nonsensical excuses, just admit it. I feel that being punctual is basic manners; it’s a form of respect for the party you’re meeting.

M: Definitely, she’s so busy all the time now.

Sh: They’re just not used to it. I wasn’t working for a very long time  —  this is my first proper job ever — so we could spend the day going out for yumcha (afternoon tea), and having dinners together every night at 6.30pm. I guess they miss that. That being said, Saturday mornings are still reserved for family, and I try to stay at home on Sunday evenings so I can spend some time with popo too.

G: Yes, nowadays we keep leftover food for her.

Sh: Sacrifice —  My mom’s actually extremely career-driven but she gave it all up to raise us, especially since my father’s based overseas. She stopped working when she was pregnant with my brother and I, and never went back to work. I cannot even imagine how difficult it must have been caring for twins, along with a 2-year-old toddler. Till this date, she still jokes that if she had continued working she’d be a 女強人（career woman) and I do feel that it comes with a tiny tinge of regret. She always puts the family before herself; it’s really selfless, unconditional love. She’s taught me how to put others before myself, and to be more considerate. I really feel very lucky and blessed.

M: Positivity — My daughter has the ability to laugh off a lot of things. Sometimes I really don’t know what goes on in her head. She’s like this ball of energy, a perpetual cheerleader.

G: My granddaughter taught me how to be “modern” (laughs)

Sh: I think she means all the “peace” signs I make her do, and I always show them lots of pictures on my iPhone. 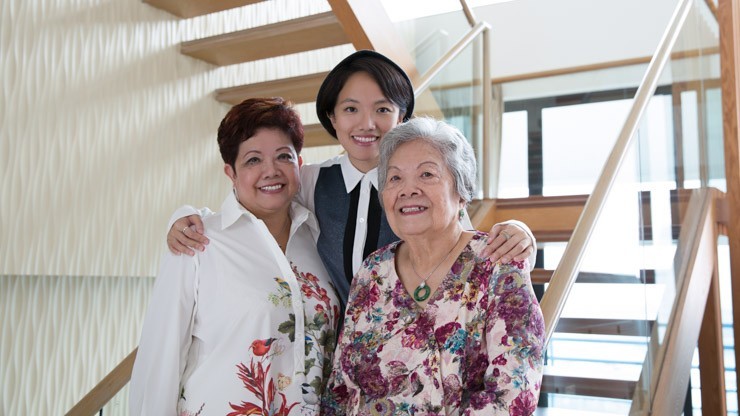 S: Do you have one particular memory of each other that really stands out? It could be funny, touching, or even silly.

Sh: When my mom was ill and undergoing treatment, I undertook the responsibility of doing the weekly marketing at Tiong Bahru Market. Initially, the vendors kept asking me where my mom was but they gradually warmed up to me and we became really chummy. I can’t remember exactly but I think this went on for close to a year. When my mom was finally well enough to go marketing again, people were asking her, “Where’s your daughter?” and she got slightly upset by that. (laughs)

M: Yes, I told her, “你抢了我的江湖地位“ (laughs) (Spoken in Cantonese, something along the lines of “you’ve usurped me”)

Sh: Sometimes I think to myself, as morbid as this sounds, that it might be a blessing that my mom got cancer. It brought us even closer together; my dad too. I went overseas right after junior college, and except during school holidays —  which I spent travelling, for the most of it — I didn’t get to spend that much time with my parents. Even after graduating from university, I wanted to be somewhat nomadic; I was doing an internship in Shanghai when the news broke, and returned home immediately. Also, if hadn’t returned, I would never have met Darren in film class, and wouldn’t be working at Shentonista/UNIFORM now.

M: It’s nice to have her back. There’s more life at home now.

Sh: For my mother — giving, optimistic, sociable. For popo: composed, elegant, determined. My mother is one of the most generous people I know, and she has so many friends. She’s really sociable. Also, she’s been extremely optimistic in her fight against cancer a couple of years back. She’s a true trooper. My grandma was never formally educated because WWII happened, but she’s literate. My grandpa taught her how to read using the newspaper, character by character, and even now, she reads the papers everyday to keep her mind active. I’ve never seen her yell at anyone either.

G: Work hard and strive to do the best in whatever you do.

Sh: Thank you for all the sacrifices that you’ve (both) made over the years. It’s our turn to care for you both now!