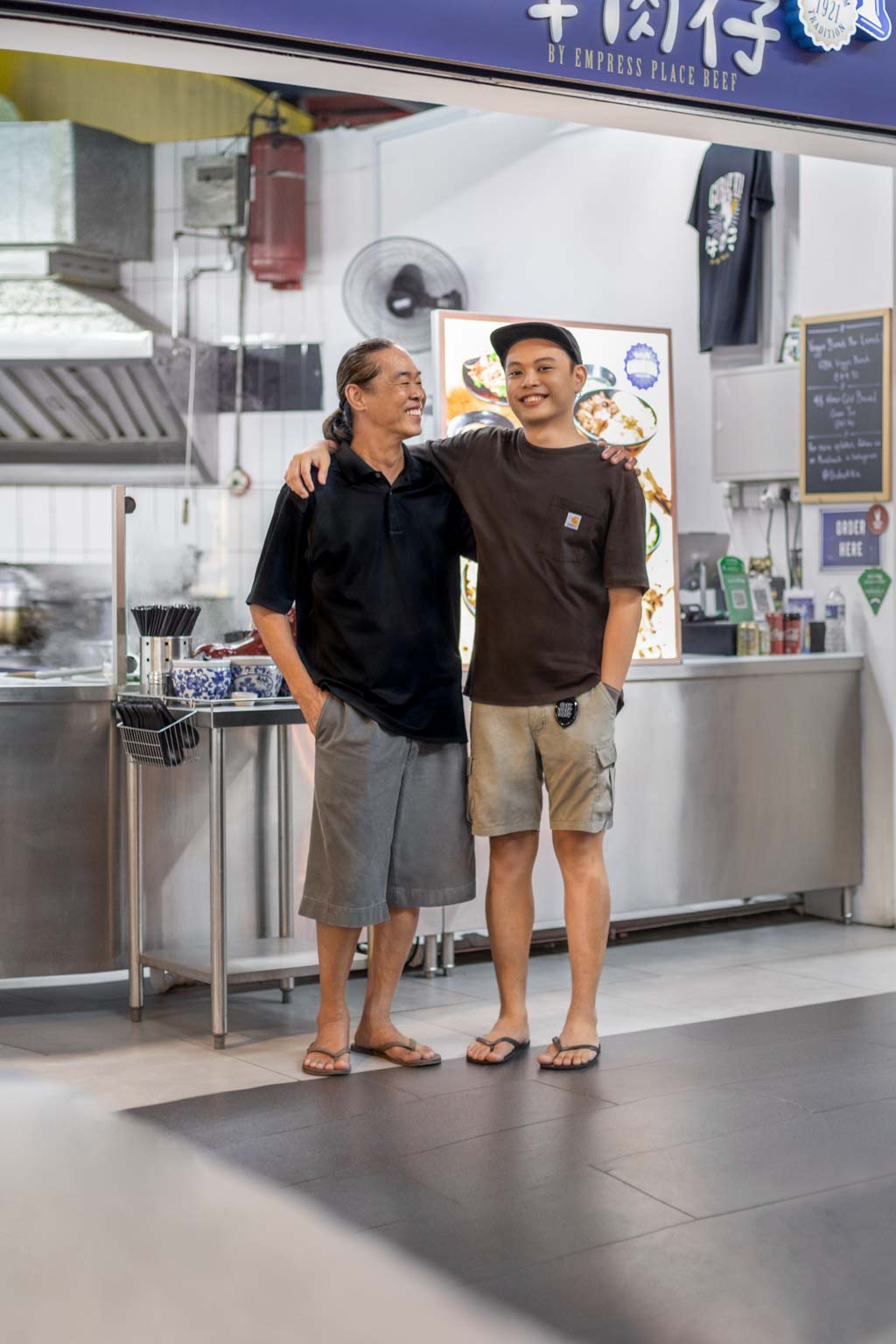 Like the apple that never falls too far from the tree, the beef kid does not stray too far from his homeground either. Helping out his dad at Empress Place Beef Kway Teow from a young age earned John Paul the nickname of gubak kia, Hokkien for “beef kid”—a title that he admits wasn’t his favourite while he was growing up, although John Paul has since learnt to embrace both the name and his family history. Living up to a legacy that has been ongoing since 1921 is no easy feat, but at the age of 24, John Paul has managed to  transform his father’s beef kway teow history into a creation of his own: just earlier this year, he opened Gubak Kia, a new page in the story for both Mr Lim, John Paul’s father, and Empress Place Beef Kway Teow; one that promises to breathe fresh new life into the familiar recipes their regulars know and love. 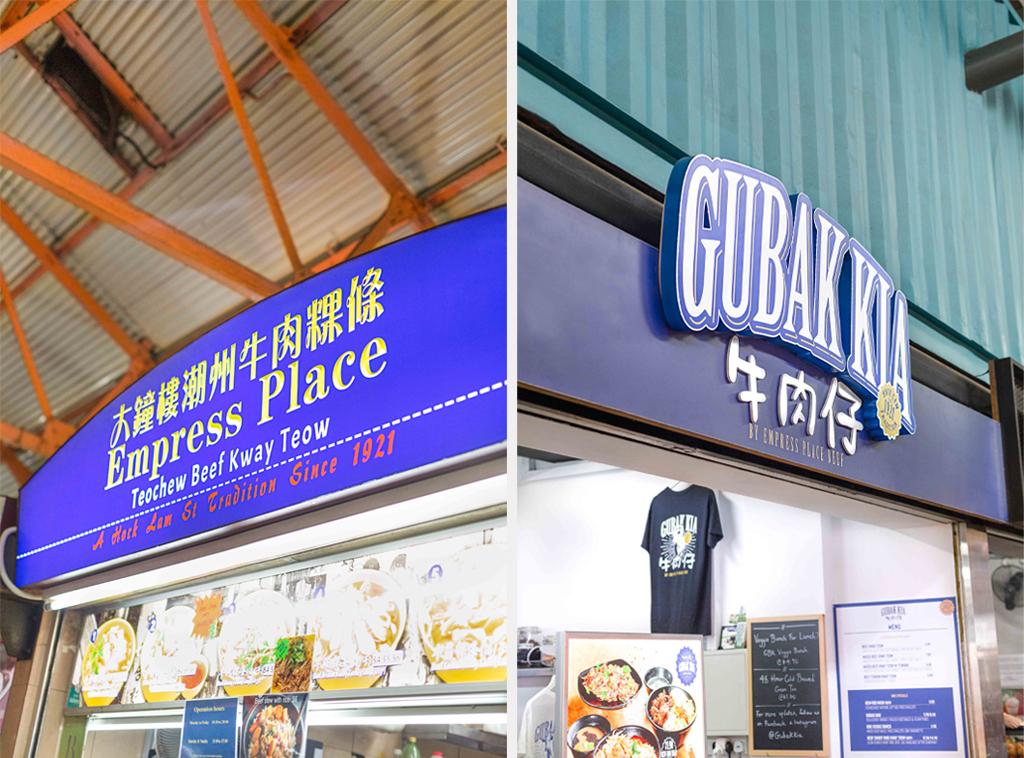 We visited both stores to try a taste of past and present—Mr Lim’s new location at Maxwell Food Centre still attracts his regular crowd, while John Paul’s stall at Timbre+ provides a gateway for people to acquaint themselves with traditional beef noodles, but with a twist. We sat them down together to ask them to create a dish that marries the best of both their worlds, while learning more about how the father-son duo continue to further their passion for the comforting bowl of beef kway teow. 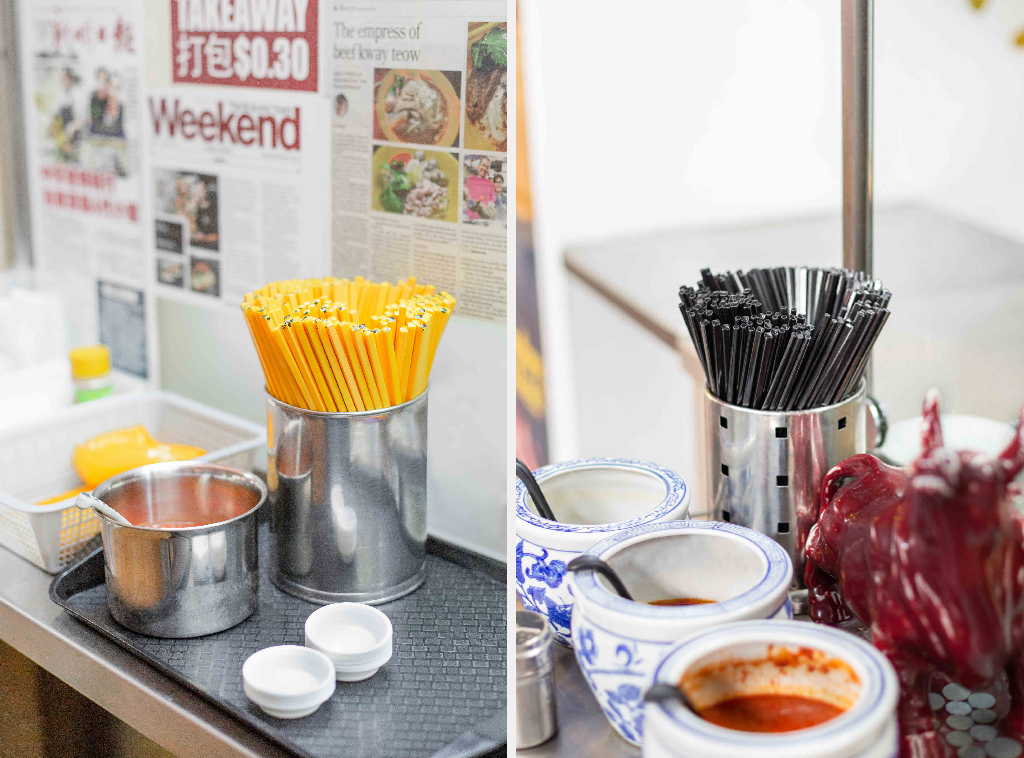 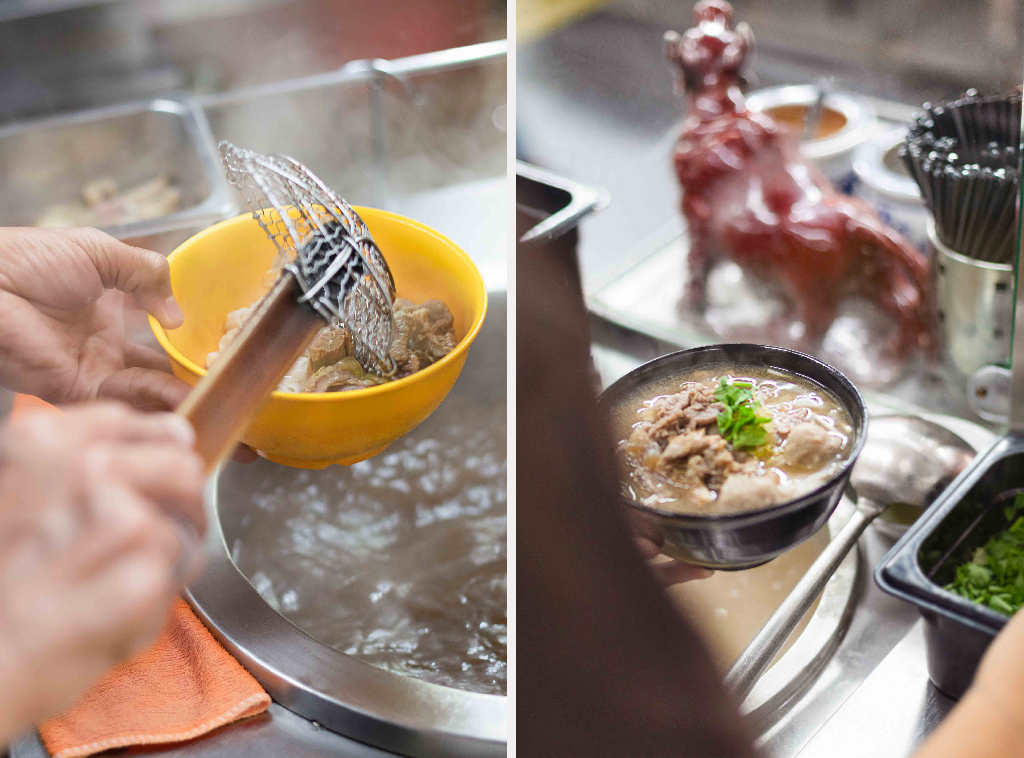 Can you tell us about the history of beef kway teow in your family? Who taught you how to cook your beef kway teow?
Mr Lim (L): I started out at the age of seven by helping my father sell soft drinks at Capitol Theatre, back when it was called Adelphi Theatre. We sold it to the British at 10 cents per drink, and then my father started helping my grandfather to sell char kway teow and beef noodles. Did you know that Lee Kuan Yew used to be our patron? We were selling next to the Attorney-General’s Chambers, so all the high court judges and lawyers used to eat at our place too.

So I learnt everything from scratch, from watching my father sell all these different items, and helping him. When it was time to take over my grandfather’s shop, my father decided to start his own, so that he could continue the legacy in his own way.

John Paul started out very young too, just like me: he was helping out at the shop from a young age, and he was helping with things like carrying chopsticks and giving out receipts, and that’s how he picked up on everything. 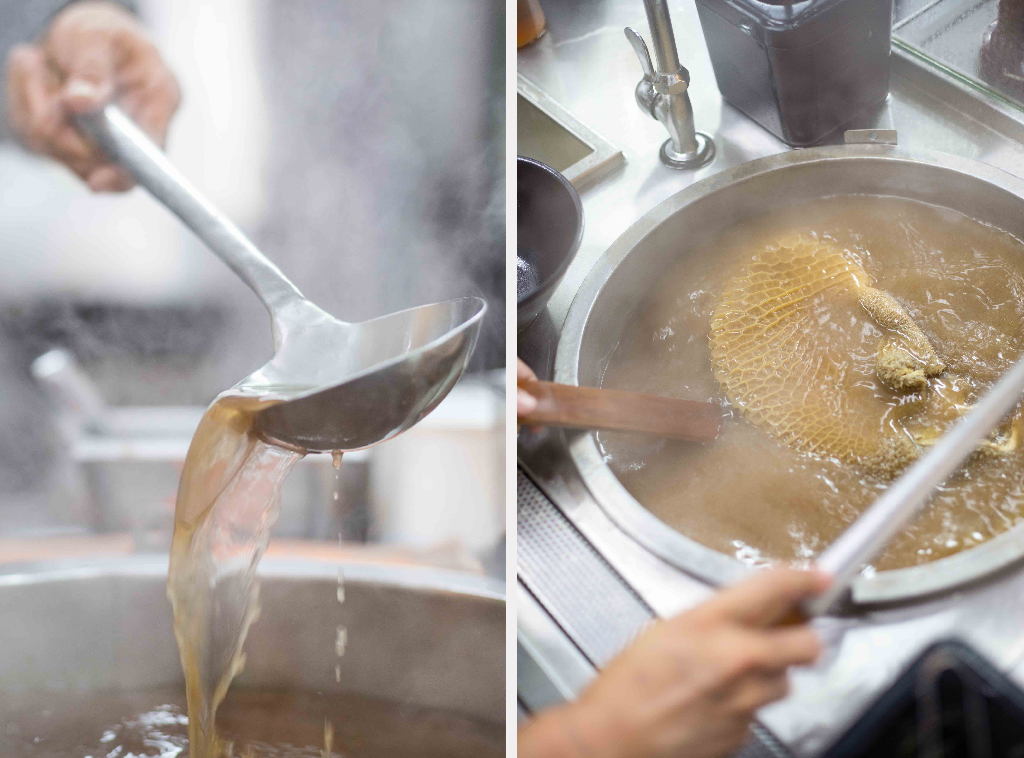 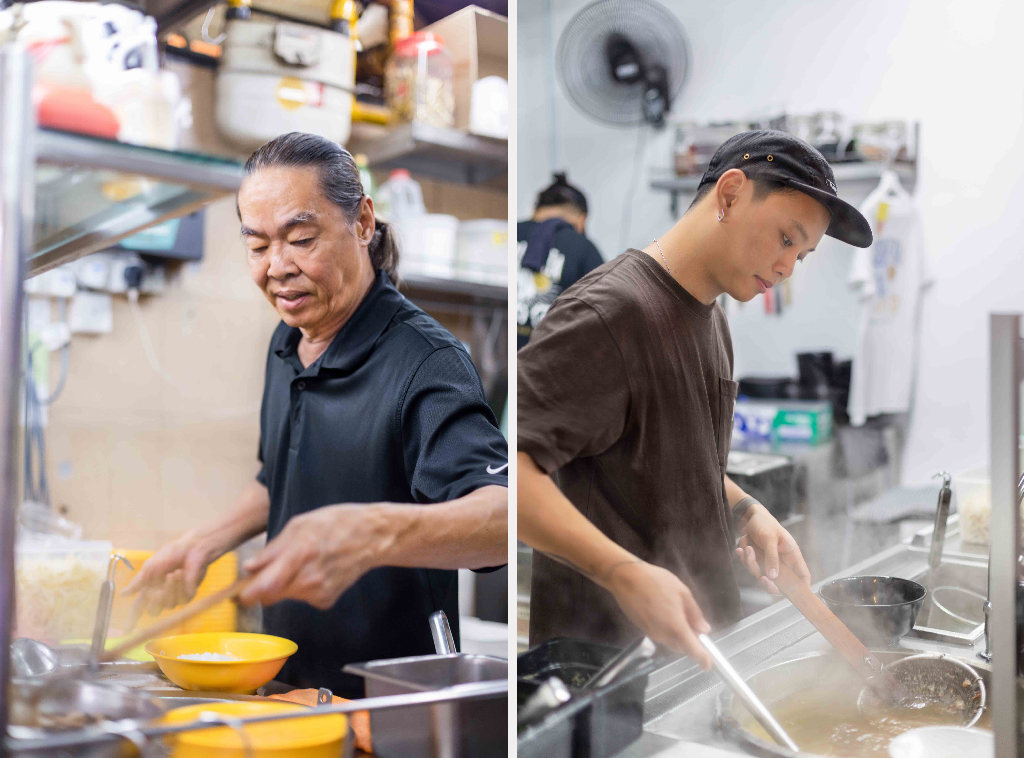 John Paul (JP): The first thing that comes to my mind is Siglap. I basically grew up in the Siglap branch of our beef noodle store. That was also where I was given the name gubak kia—everyone knew my dad as gubak—so you could say that’s where this whole thing started. As a kid, I found the nickname quite annoying, but I think that experience helped me to learn everything I needed to know. 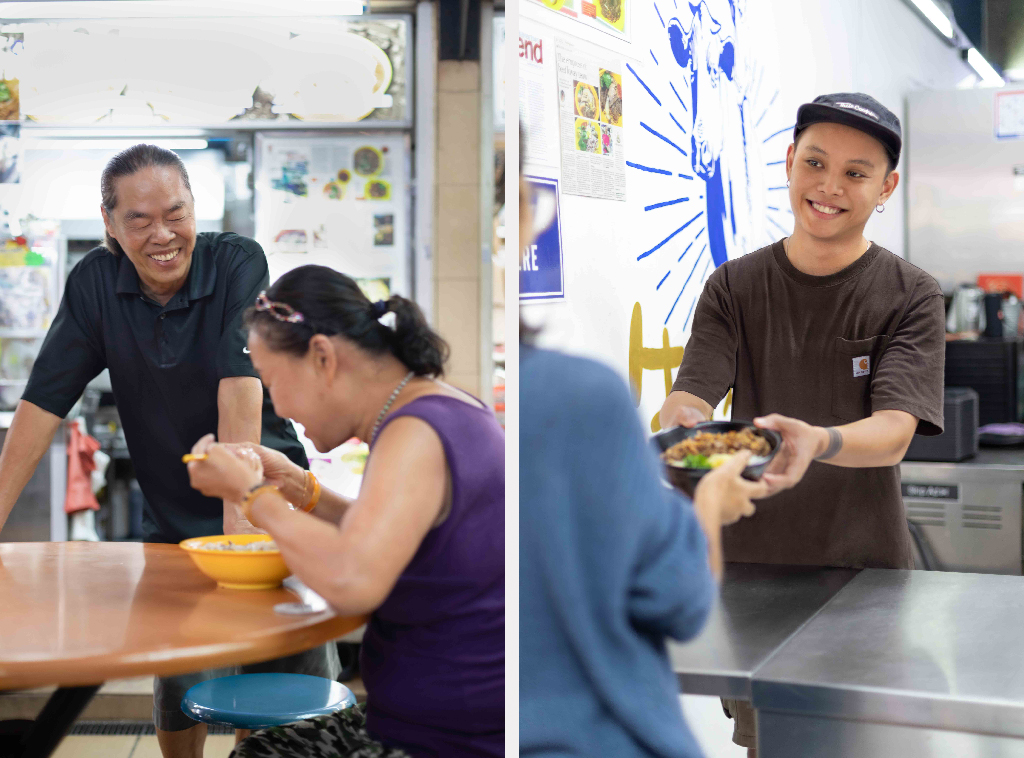 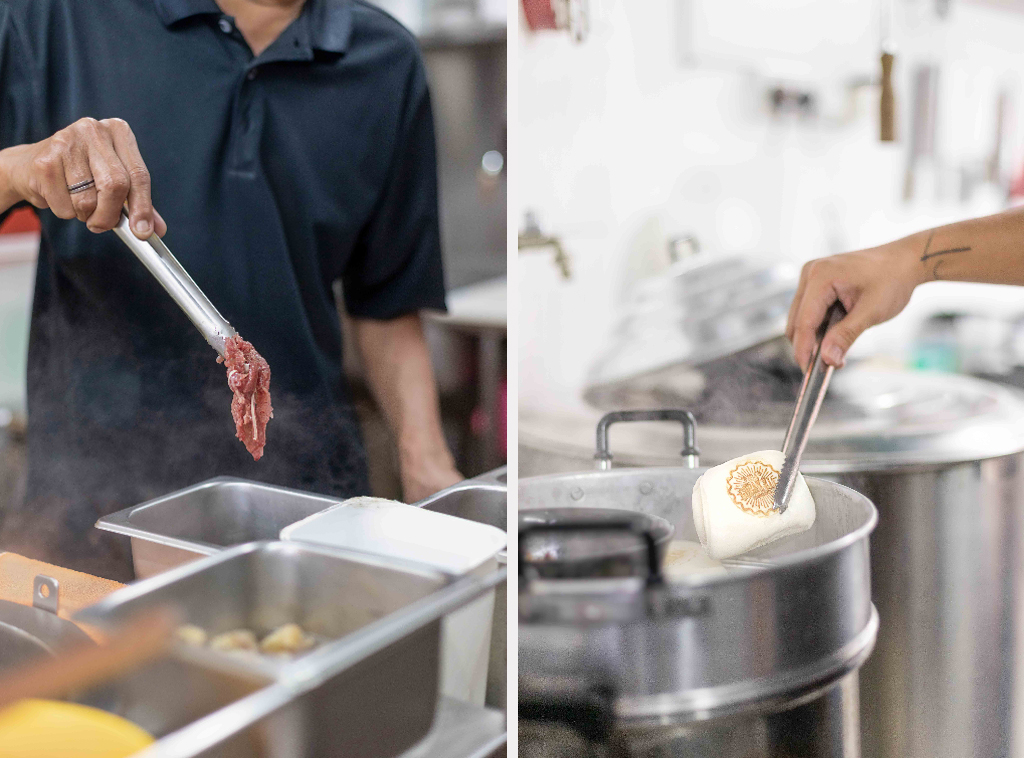 Both of you have tried a hand at creating and reinventing your dishes—how do you come up with your ideas for new dishes? Where do you get inspiration from?
JP: Honestly, it can come from anywhere. Recently, I made a cracker from kway teow. I like experimenting with new things. I’m always looking for new ingredients and finding some way to create new dishes. Some days, I cook whatever comes into my mind, and see how it turns out.

L: Seeing John Paul try something new makes me want to try something else too. We recently introduced beef stew; it’s a nice change from the regular menu. But at the end of the day, because people know our food so well, our regulars love what they’ve always eaten, and that’s okay too. 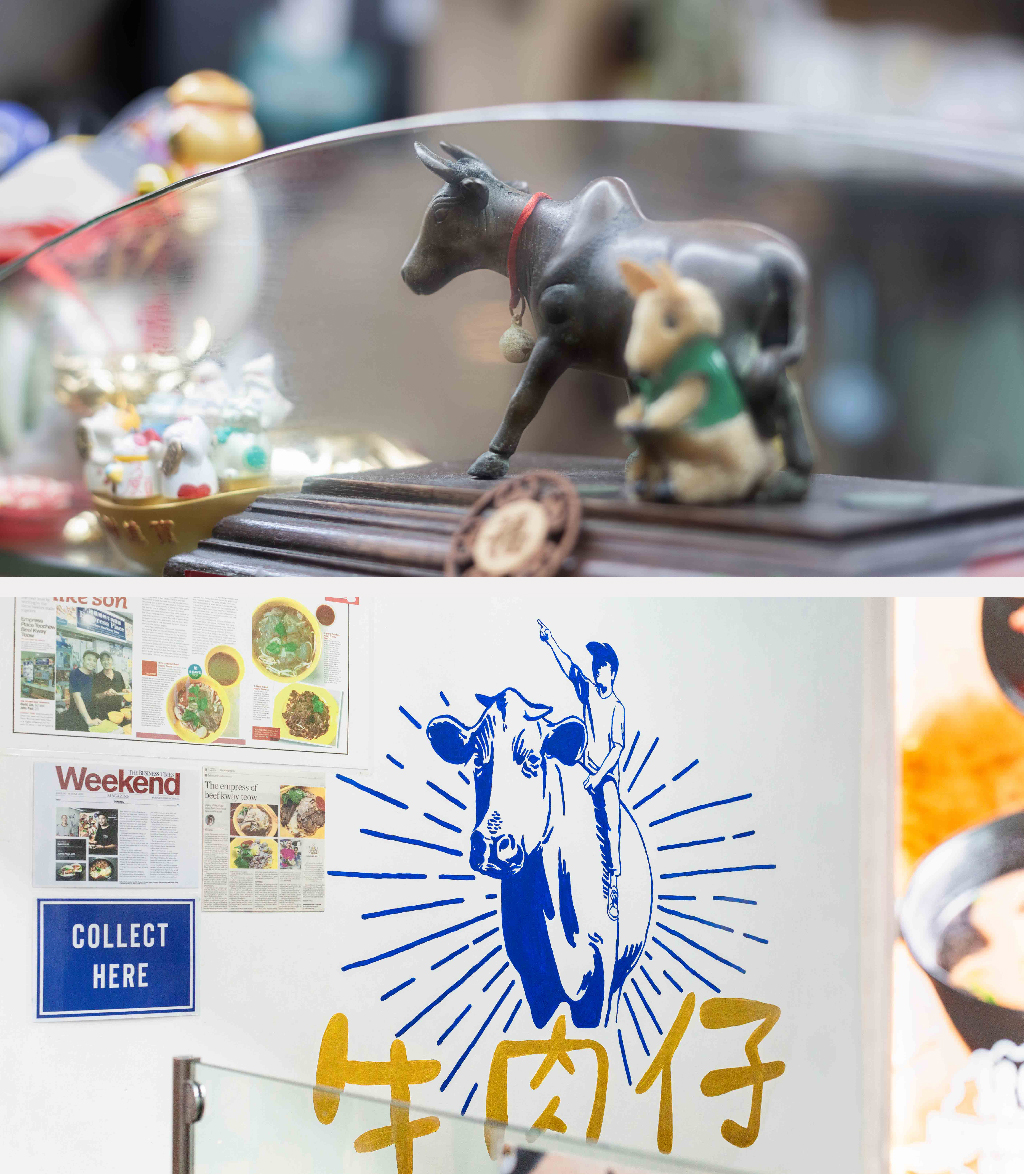 You’ve been mixing it up with your own spin on the traditional recipes, but is there a line that you wouldn’t cross when it comes to changing traditions?
JP: I follow some of my dad’s recipes, and tradition has its place, but I think there’s always room to bend rules. I’ll experiment with anything that makes sense. But if it doesn’t feel like it’ll work, I’ll stash the idea away.

What’s your favourite dish from each other?
L: The beef short rib kway teow is very interesting. I like to try everything new he puts up, but this one is my favourite. 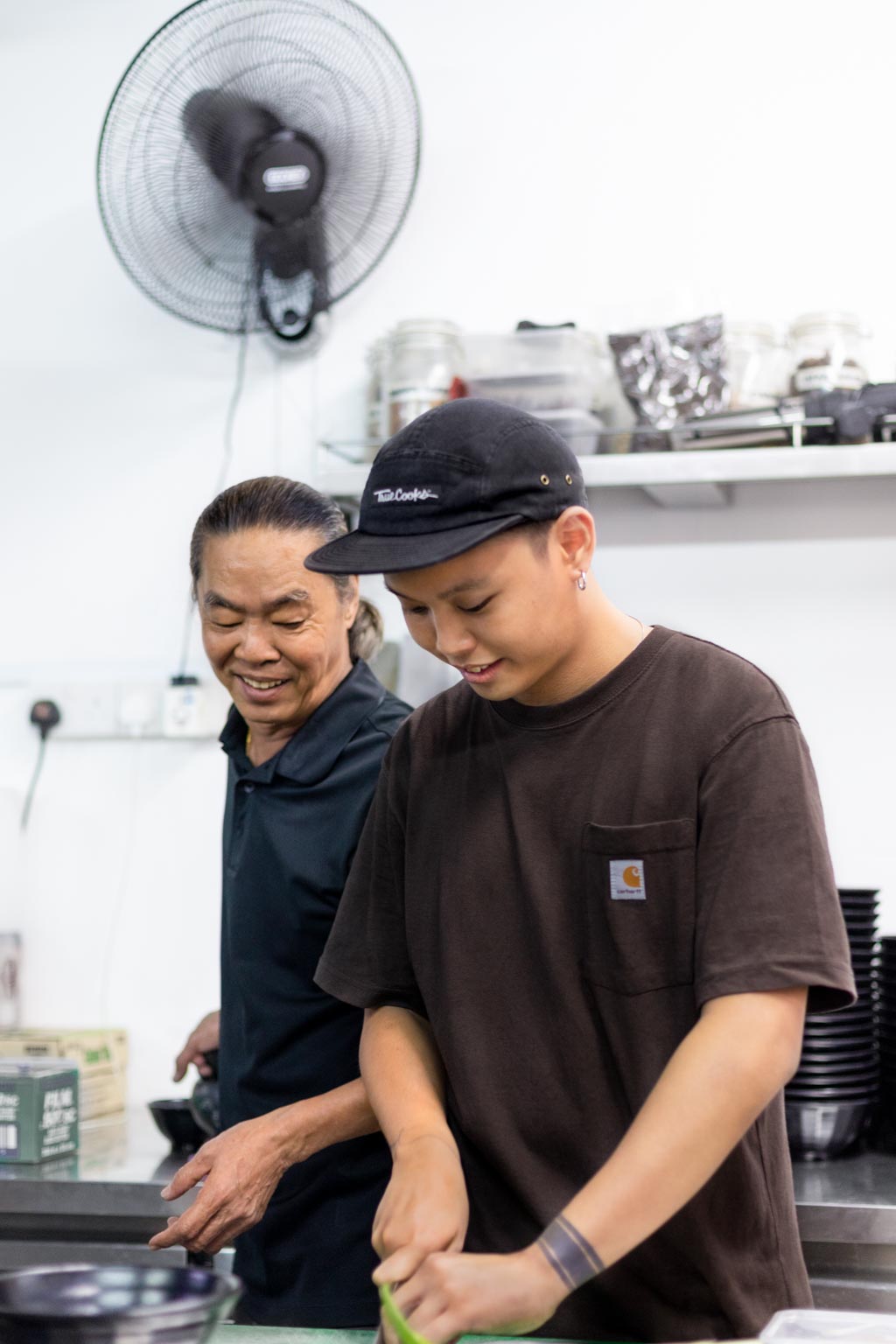 You’re cooking a new dish today that both of you came up with—what inspired you to create this?
JP: What’s new about our dish is actually the black pepper scallion sauce—it’s black pepper beef kway teow. At the heart of it, both of our beef noodles start off in a similar way: all of them use beef stock. So what makes it different is the garnish and the ingredients that go on top of the beef noodle base. I think the inspiration came from just us talking—it wasn’t easy earlier, back when we first started working together, because we both have strong ideas. He’s become very chill over the years; he’s like a friend now, so we usually discuss our ideas openly.

Have your parents always supported your decision to become a hawker?
JP: We’re a hawker family, so no one had any objections when I decided to open my own stall. I think food runs in our blood, and it’s hard not to feel connected to beef noodles when you grew up surrounded by it and cooking it almost daily.

L: He’s talented in other things too—he’s a very good writer! His degree was in mass communications, but he knew that his true passion is in cooking, which is how he ended up here.

JP: I did consider being a writer or a photographer, but this was ultimately what I wanted to do.

What do you personally think has been your biggest achievement thus far?
JP: This shop (laughs). It’s not that it was an uphill journey to end up here, but there are always challenges involved in stepping out and doing something different. I’m happy with where I am right now. 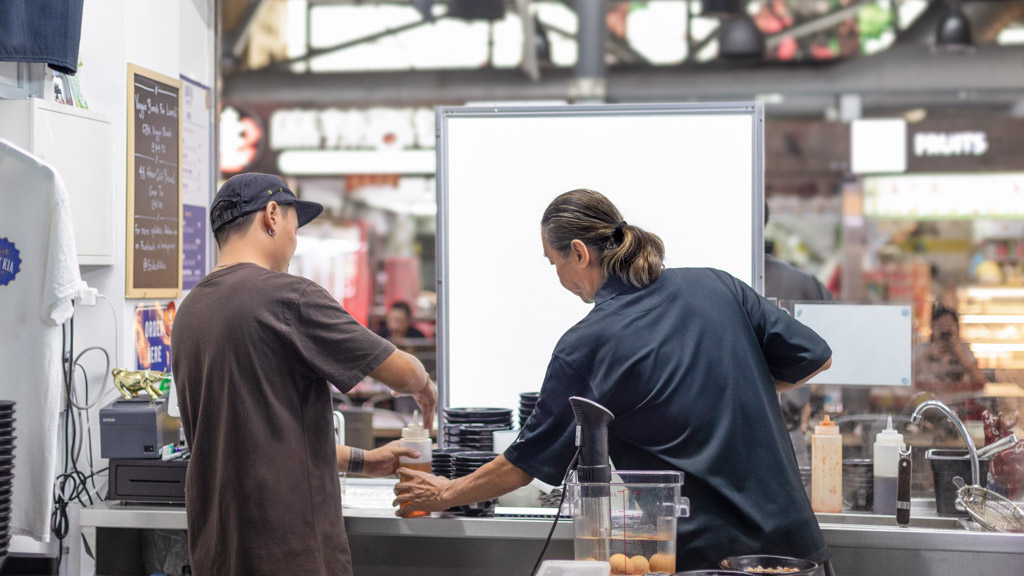 We know the hawker business can be tough. What keeps you going every day?
L: What keeps me going every day is that it’s a challenge. No one else makes Teochew-style beef noodles in Maxwell Food Centre, and it’s up to me to keep this going. With the more common Hainanese style, the soup isn’t the clear stock you see in ours, but more of a starchy gravy consistency. Ours is drier, like the Teochew mee pok (minced meat noodles) style.

JP: The hardest part is, honestly, the travelling (laughs). It’s true, though—Timbre+ is quite a far distance from our house so sometimes all the travelling can get annoying, especially when your ingredients come from different places. 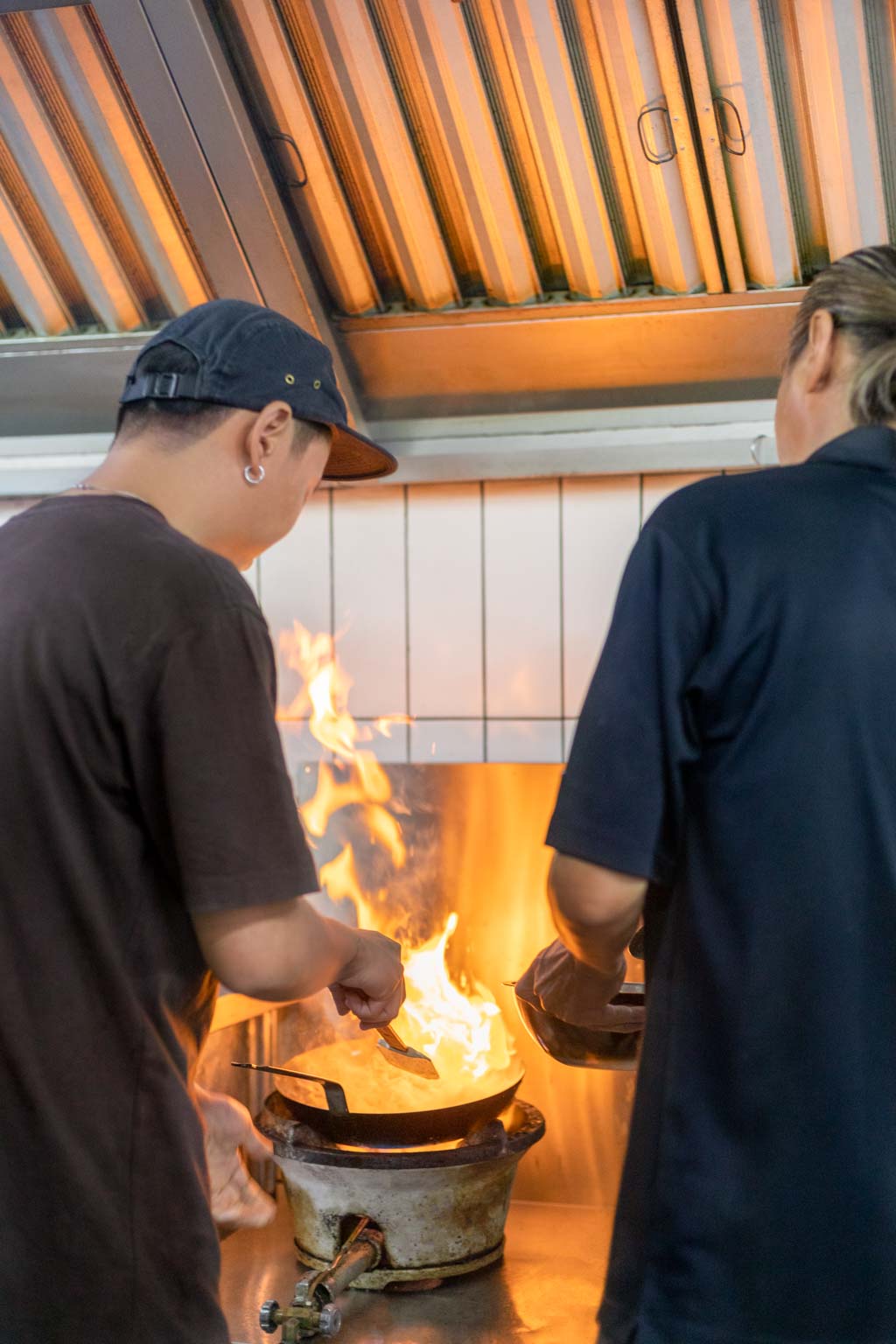 What’s the biggest change you’ve witnessed in the hawker business over the years?
L: The food business isn’t easy if you don’t have the drive. It’s even harder because the crowd is unpredictable, even with a good location—I’ve moved around a few places, from East Coast to Wisma Atria to Siglap, so I know how each location has their own ups and downs. Otherwise, the biggest change is the price of the ingredients that we have to keep track of regularly.

You’ve worked in your dad’s stall and in your own stall—what’s been the biggest difference?
JP: There’re obviously more things to consider when I’m alone. My dad still helps out, and gives advice (even when I don’t ask sometimes), but I handle everything else on my own. But it’s nice to have your own space. 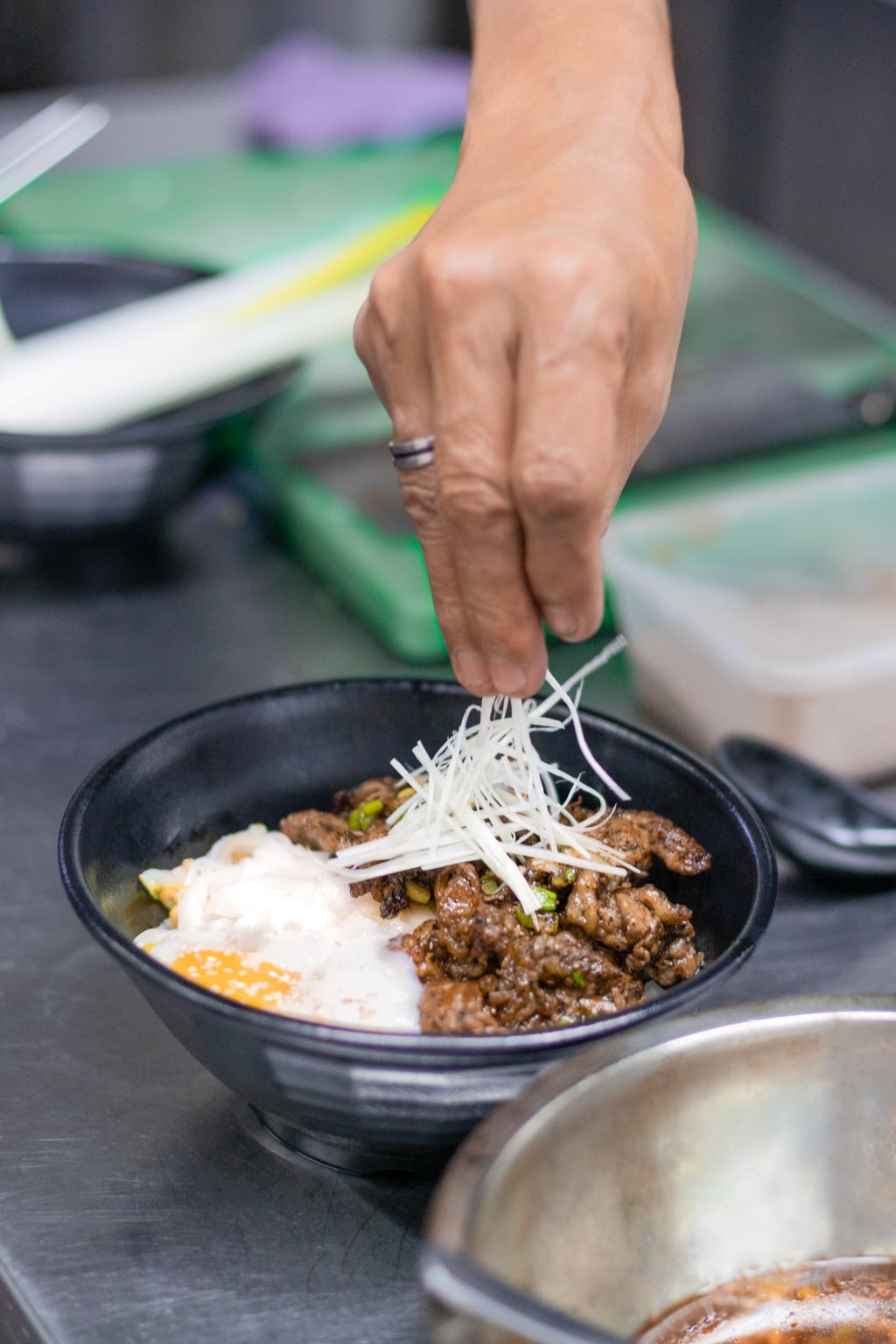 How was it like working with your dad? What kind of boss was he, and what do you feel was your biggest takeaway from him?
JP: When I was younger, he was a lot more strict, but he’s become much more chill. It helps that I’m the middle child in the family, so I’m the one who’s supposed to break all the rules (laughs). The biggest thing I’ve learnt from him is to work hard and never to complain. He can be hard on me sometimes but he’s never been wrong. He’s not unreasonable. Everything he’s taught me over the years is the reason why I am who I am today.

What was it like working with your son? What impressed you the most/what do you hope he can improve upon?
L: He’s always ready to put in the effort. No matter what you tell him—encouragement, criticism—he takes it quietly and works on it. He’s talented, but talent alone cannot get you far. It’s because of his hard work that he’s here today. 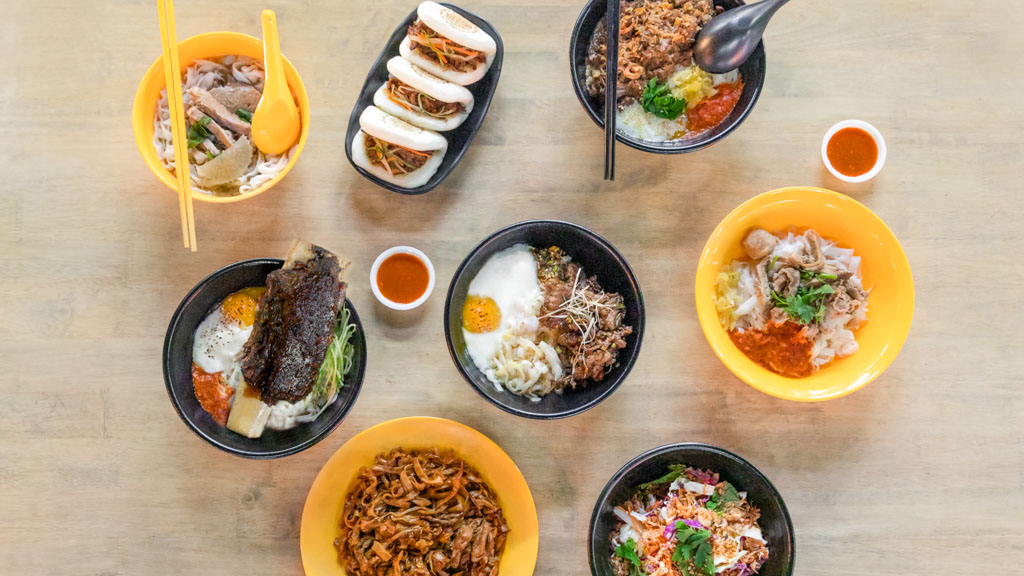 Do you think the next generation will be successful in continuing the hawker culture?
L: It all depends on passion. For me, I have my daughter and John Paul to continue on the legacy that Empress Place started. Even if we don’t have my stall, the name will continue on with John Paul’s shop, so I’m not worried. But there are a lot of other shops that don’t have new blood to carry on their history. Food history must be preserved—I started cooking to continue my grandfather and my father’s efforts, and now the brand’s almost a hundred years old.

What’s next for you after this? Do you see yourself doing this for the rest of your life?
JP: For me, it depends on the circumstance. I’ve seen how hard it is for my dad to let go of his shop, and now that I have Gubak Kia, I understand his concern—your name is associated with the shop, so the dish that’s put on the table is yours. Especially with something like beef noodles, which has a long history, I wouldn’t be comfortable with letting just anyone run the store. For now, I don’t see myself doing anything else. It all depends on timing—maybe if I feel like exploring something else in the future, I will. But for now, there’s a lot more to do with Gubak Kia.

L: In two years’ time, in 2021, it’ll be the 100th anniversary of Empress Place Beef Kway Teow. I want to keep going until then, and celebrate the century. After that, I think wherever I end up, I’ll do something related to cooking. Even when I retire and I migrate, I want to teach other people how to cook. 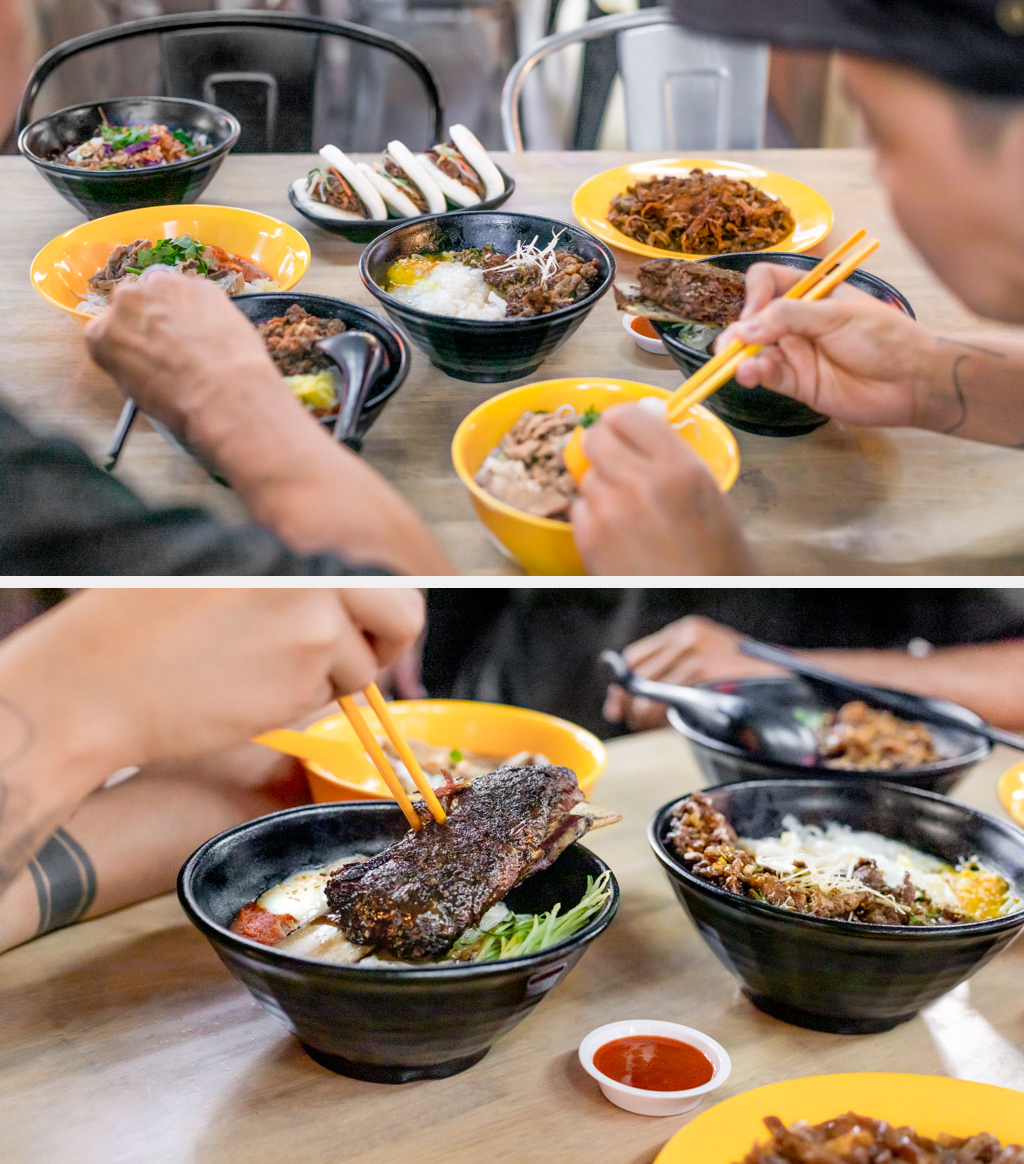 What’s the most important lesson you’ve learnt from your father about running a business?
JP: Being receptive to changes. To keep on going and doing the same thing is easy, but you always need to keep an open mind and listen to what the customers want, and adapt as much as possible. 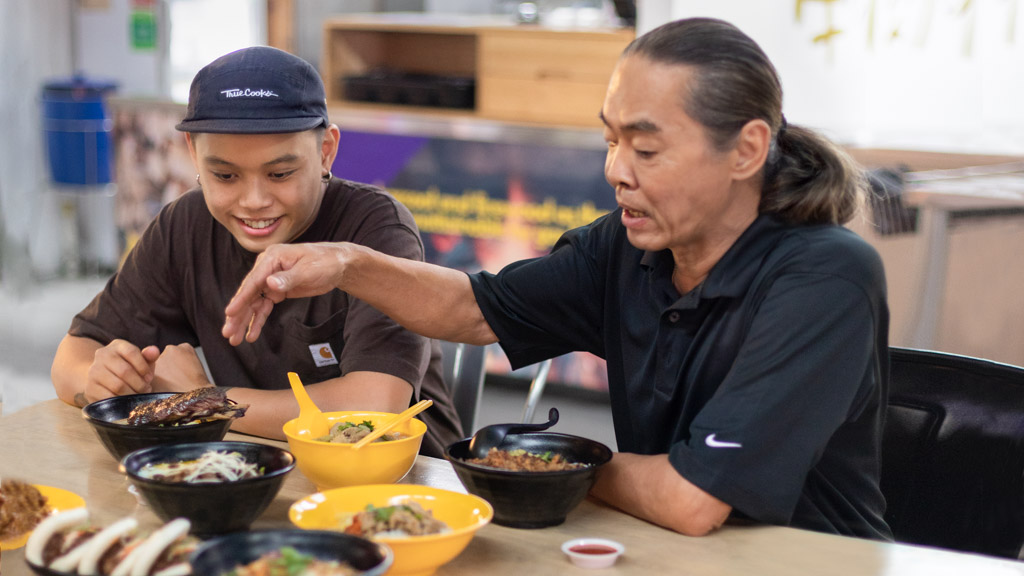 One advice you’d give each other:
JP: It’s time to take it easy (laughs). It’s hard for him, because this is what he’s been doing his whole life, but he needs to take it slow and not work himself so hard.