“Hey guys, do you need me to move him away? I’ll put him somewhere else if he’s affecting your recording.”

Of all the sounds you’d expect to hear in a remote corner of the island, just bordering the Kranji Expressway (KJE) and a pocket of natural forest, the squawk of a very expressive and excitable sulphur-crested cockatoo probably does not rank highly. That said, Terrascapes is not your ordinary plant nursery, and its owner Sandy Soh is not your typical horticulturist.

Just removed from the noise, heat, and dust of the KJE, at the deep end of Choa Chu Kang Track 14, Terrascapes is a little pocket of calm and greenery, with plants from all over the world, a fact made more impressive when we learn that all of Sandy’s plant-related knowledge is self-taught. Growing up surrounded by greenery in his grandfather’s house, Sandy developed a love for plants early on, though they only became a part of his career later on when he ventured into landscape architecture. 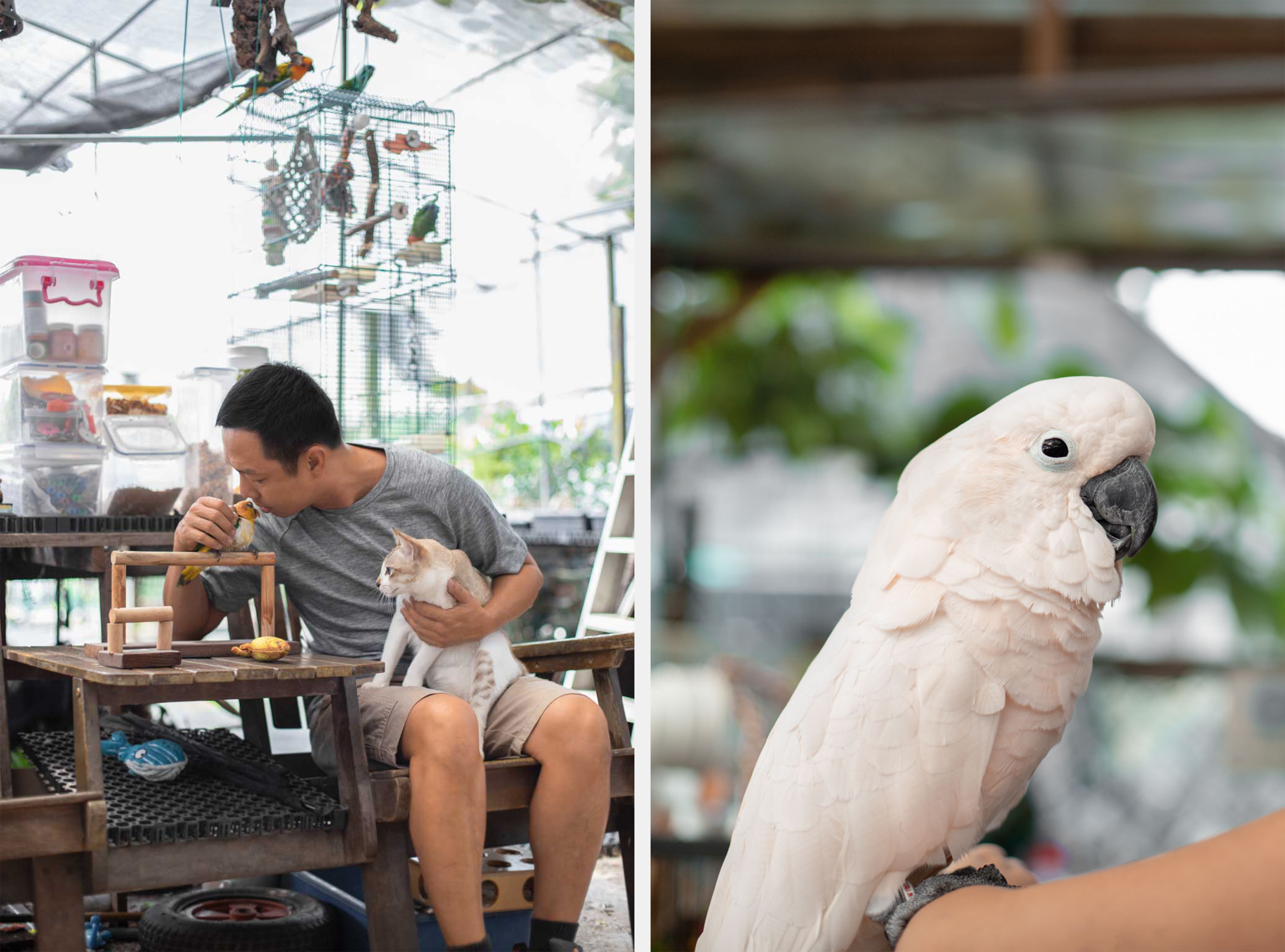 However, plants aren’t the only living things that Sandy shares an affinity with. In addition to a wide array of plants, Terrascapes is also home to six cats and 12 parrots, all of whom are creatively named, and vastly different in temperament. Besides sharing his space with the furry and feathered friends that currently take up residence at Terrascapes, Sandy also has, in his past, worked at the Jurong Reptile Park and at a pet shop.

With the wide variety of plants he’s encountered through running Terrascapes, what’s a plant that describes Sandy the best? “A succulent. Unlike other plants, they’re strong and resilient and can go a long time without water. It would be akin to a person who can weather any trials and tribulations in life.” From his self-starting nature and entrepreneurial resilience, we’re inclined to agree.

What sparked off your interest for plants?
My grandad had a lot of plants at home, and later on when I spent more time there I felt like I wanted to start growing plants. That was before it became a craze. I’d say what got me started was pitcher plants; I found them fascinating because they were carnivorous. I didn’t dabble in plants until later on—one of my earlier jobs was working at the zoo and the Jurong Reptile Park. 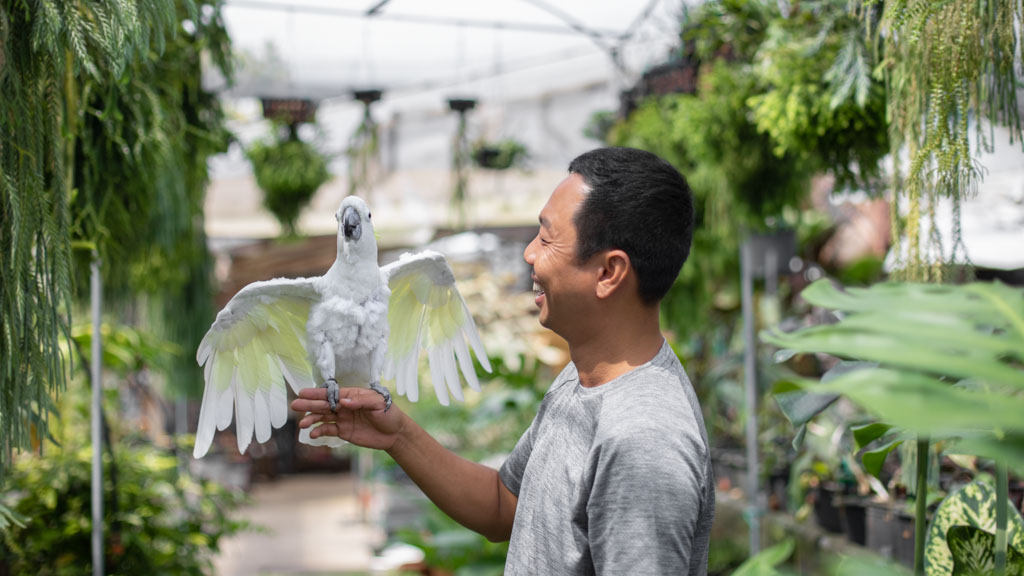 Who taught you how to plant?
I got some of my knowledge online, but a lot of it was trial and error. The regular plants that we use in landscaping are easy; you just have to know whether they’re sun-loving or prefer shade. But it was more difficult for the more exotic plant species, at least when I started, because there weren’t a lot of people growing them locally, and a lot of the information available online was based overseas, which didn’t take our tropical climate into account. So what I did was to pick out the fundamentals of the knowledge, and tweak it to figure out what worked—things like what environment suited them, what potting mix was best.

We know you also have an interesting story about an incident with a crocodile—can you tell us more about that?
I worked at the Reptile Park straight out of National Service as a reptile keeper, and part of our duties was performing in the crocodile show. During one of the performances, I was focused on one crocodile and didn’t see another next to me. She turned her head and her tooth grazed my calf. Unbeknownst to me, the tooth had sliced open my skin and it was bleeding quite a bit. It was only when I noticed there was blood on the floor that I realised, and the audience was in shock. Thankfully, it was a relatively superficial wound and I only needed stitches. 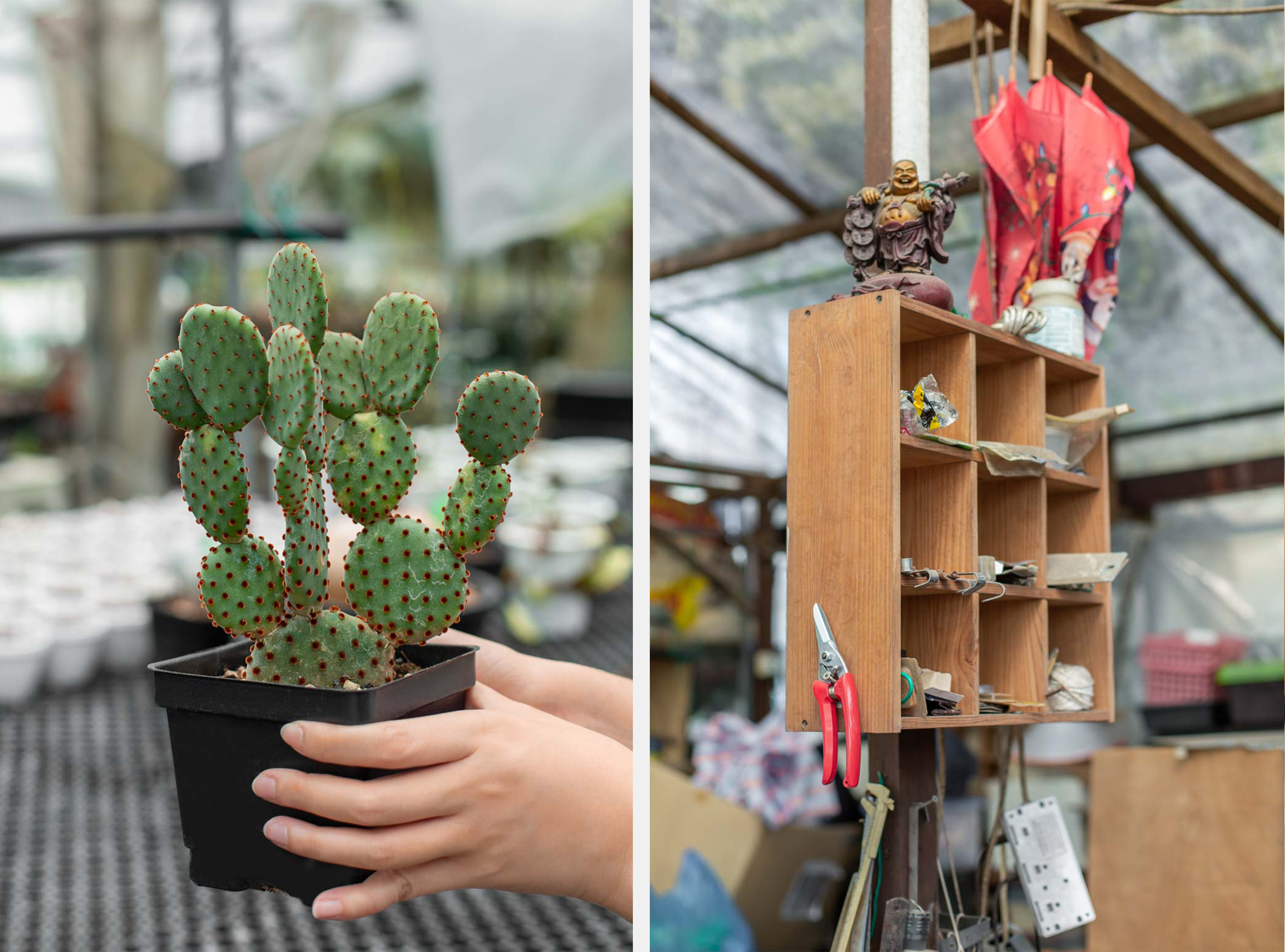 Why the switch in your job from a zookeeper to a landscape designer?
After I left the zoo, I went to work at a pet shop. The owners decided to wind down the business after a few years, but I decided to continue providing pet transportation and grooming services for some of the customers who kept in contact with me, and which led to starting my previous business, Pet Concierge. While managing Pet Concierge, I started spending more time at home at my parents’ place and started to have an interest in growing plants, and used their garden to try my hand at planting. I got more serious with exotic carnivorous plants such as nepenthes (pitcher plants) and sundews, and had good success with other exotic species that I bought and grew. I even got approval from NParks to plant up the sidewalks on the street outside my house. From there, friends came to me to get landscape works done at their houses and I also received recommendations. I’d say the turning point came with Yuan Hong and Ee Lin, the owners of IpLi Architects, who started out as clients of Pet Concierge and became friends, and they set me on the road to more professional jobs by engaging me for some of their projects.

Which part of the landscaping process is the most challenging?
Getting inspiration for projects can be challenging sometimes, especially if the clients or designers are fixed on certain ideas, or if their ideas are unrealistic. Clients often rush me for the quotation and I know that inspiration cannot be rushed or forced so I often have to explain that to them. Besides that, sitting down at the computer to draft out the design and quotation doesn’t agree with me much—I get neck aches and stiff joints! (laughs) I might have thorns on my ass and can’t sit still for too long. 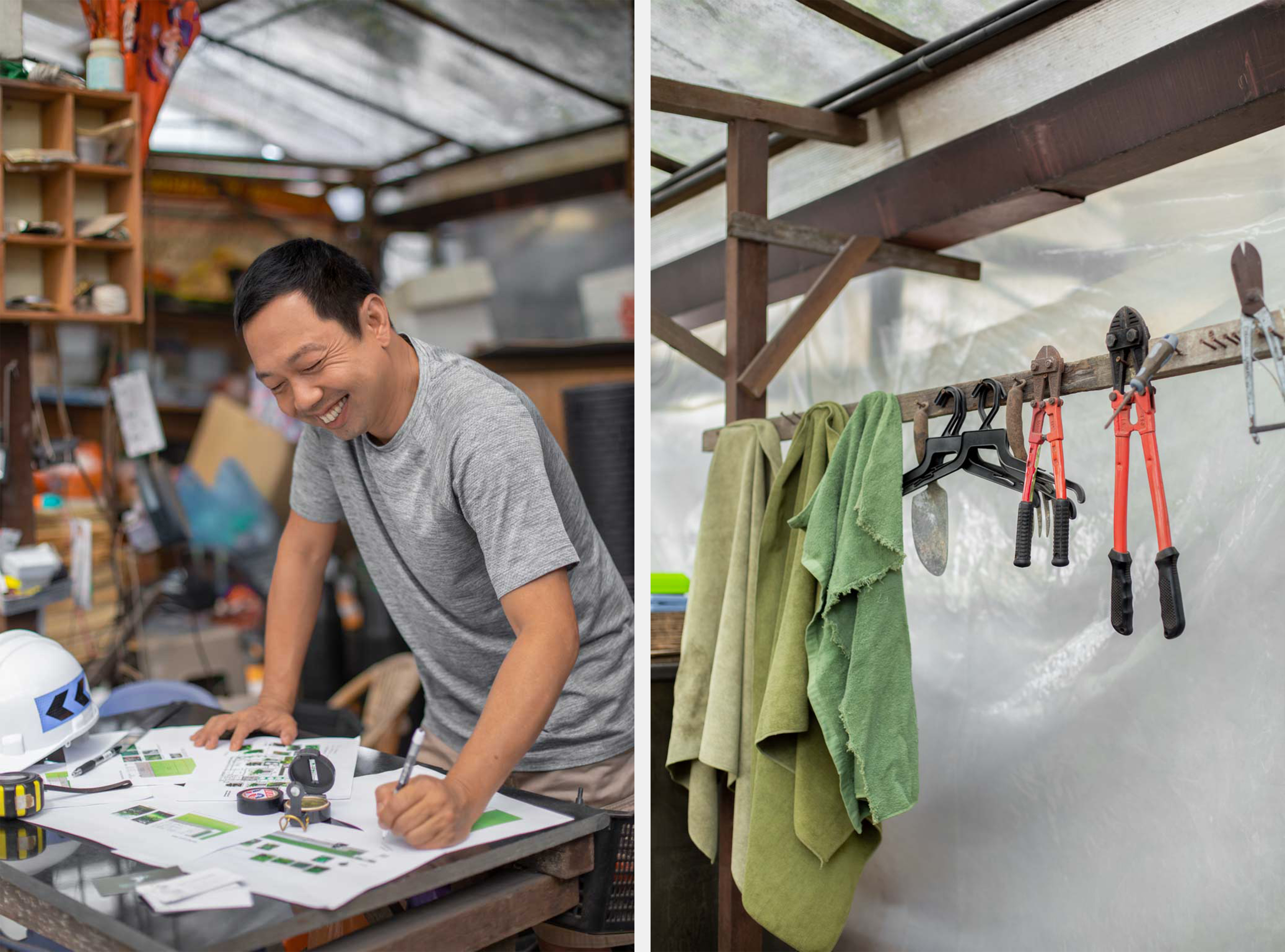 What were some of the challenges you’ve faced in the pursuit of an untraditional career path?
I would say that being self-employed means you never know what the future holds, living life day by day.  Things like not having a fixed salary and not knowing when you’re going to receive your next pay cheque; having to learn everything on your own; learning how to run a business, albeit a small one; always having to be ready to face challenges, some of which are unforeseen and unexpected; and learning to make decisive and important impromptu decisions.

How much time on average do you spend per day tending to your plants, and what has the entire process taught you?
Several hours at least. We don’t have the luxury of being at the nursery all day every day, especially since we also have to run errands, attend meetings and take care of landscape projects. We have to prioritise our daily tasks, and work on the plants that need the most care at that point in time. Growing plants is an ever-evolving process of learning new ways of growing and propagating plants, as well as coming up with better planting media for the different genera of plants. All this has taught me tenacity and patience, both in terms of taking care of plants, and in dealing with clients. 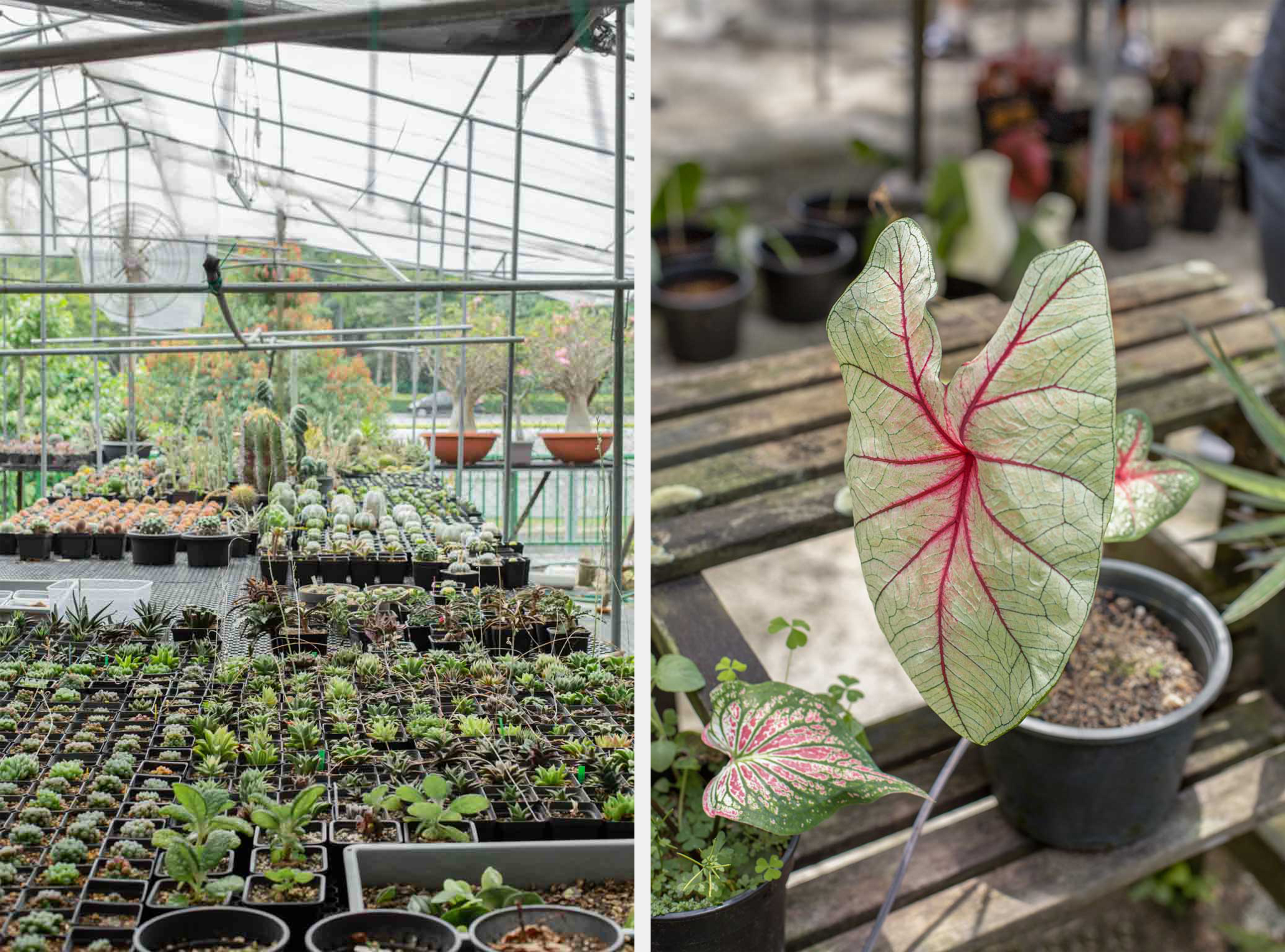 What are some of the important things to consider when choosing your first plant?
You should know the location you’ll be putting it in, the light levels you can provide, and choosing the right plant that will grow well in those conditions.

If someone is thinking of owning plants, but aren’t sure that they’ll be able to take care of one, what is a foolproof plant that you’d recommend?
Sansevierias are extremely hardy plants that don’t require constant watering as they are succulents, and they do pretty well indoors even though they are sun-loving plants.

How would you describe the exotic plant scene in Singapore? Are there more people who are interested as compared to a few years ago?
I’d say so—I’ve noticed a ‘green wave’ over the past few years, and more people are into plants these days, most likely due to social media. Also, NParks has been encouraging people to grow plants via initiatives like Community In Bloom.

What are some of the challenges you face when importing exotic plants?
The first rule of importing plants into Singapore is to make sure that the seller can provide a phytosanitory certificate for the plants, and a CITES (Convention on International Trade in Endangered Species of Wild Fauna and Flora) certificate as well if the plants are in the CITES list. Everything else would be a gamble. We have no control over the courier or shipping company and sometimes parcels get delayed and plants die. Sometimes the sellers don’t pack the plants well. The plants that we import are shipped to us bare root, without soil. Some plants ship very badly, and even spending three to four days in shipping can cause them to rot. 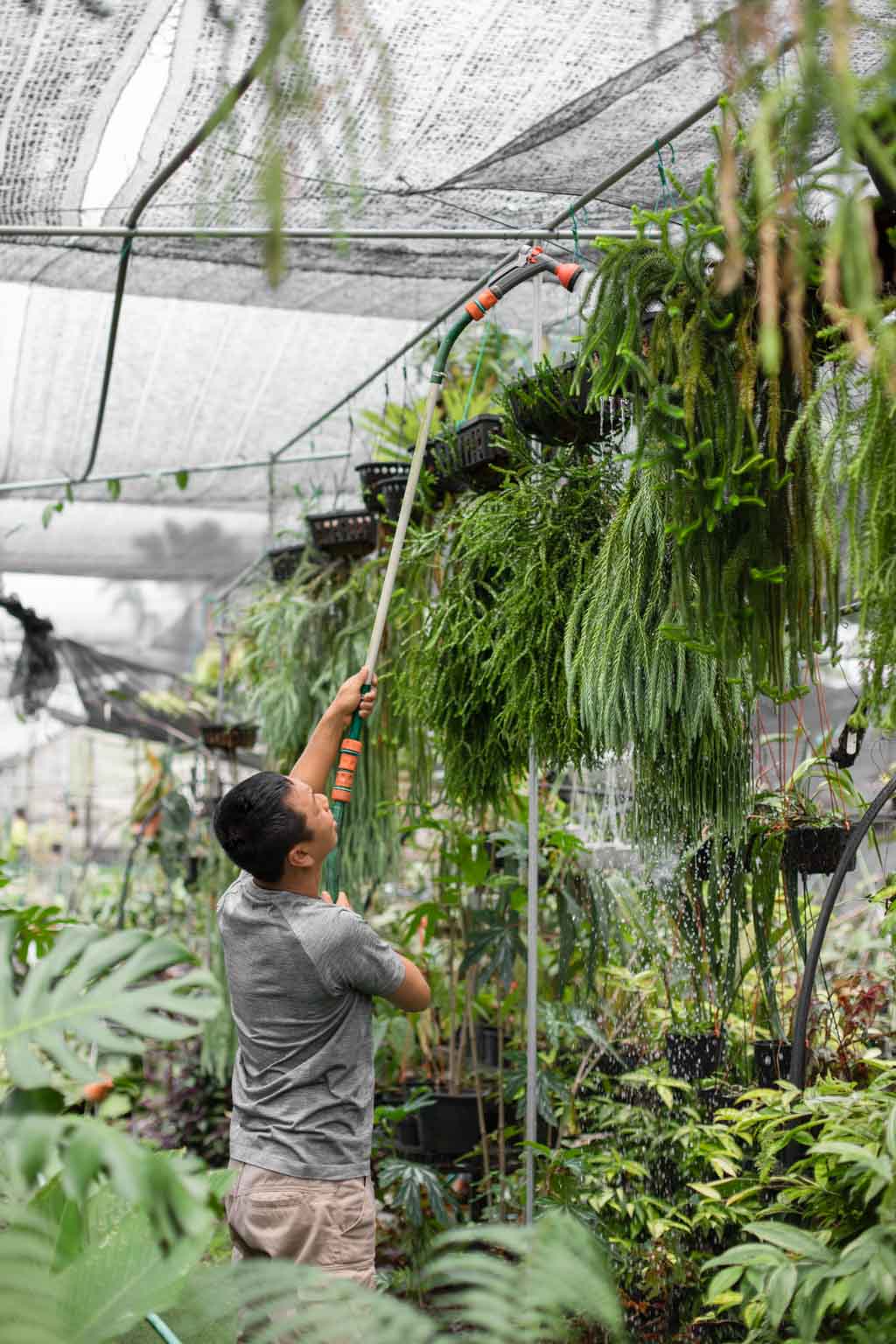 How has social media changed the type of customers you’ve received?
It has brought more serious growers of exotic plants to our nursery and has helped us to reach more plant lovers; in fact, we’ve even had visitors from other countries. 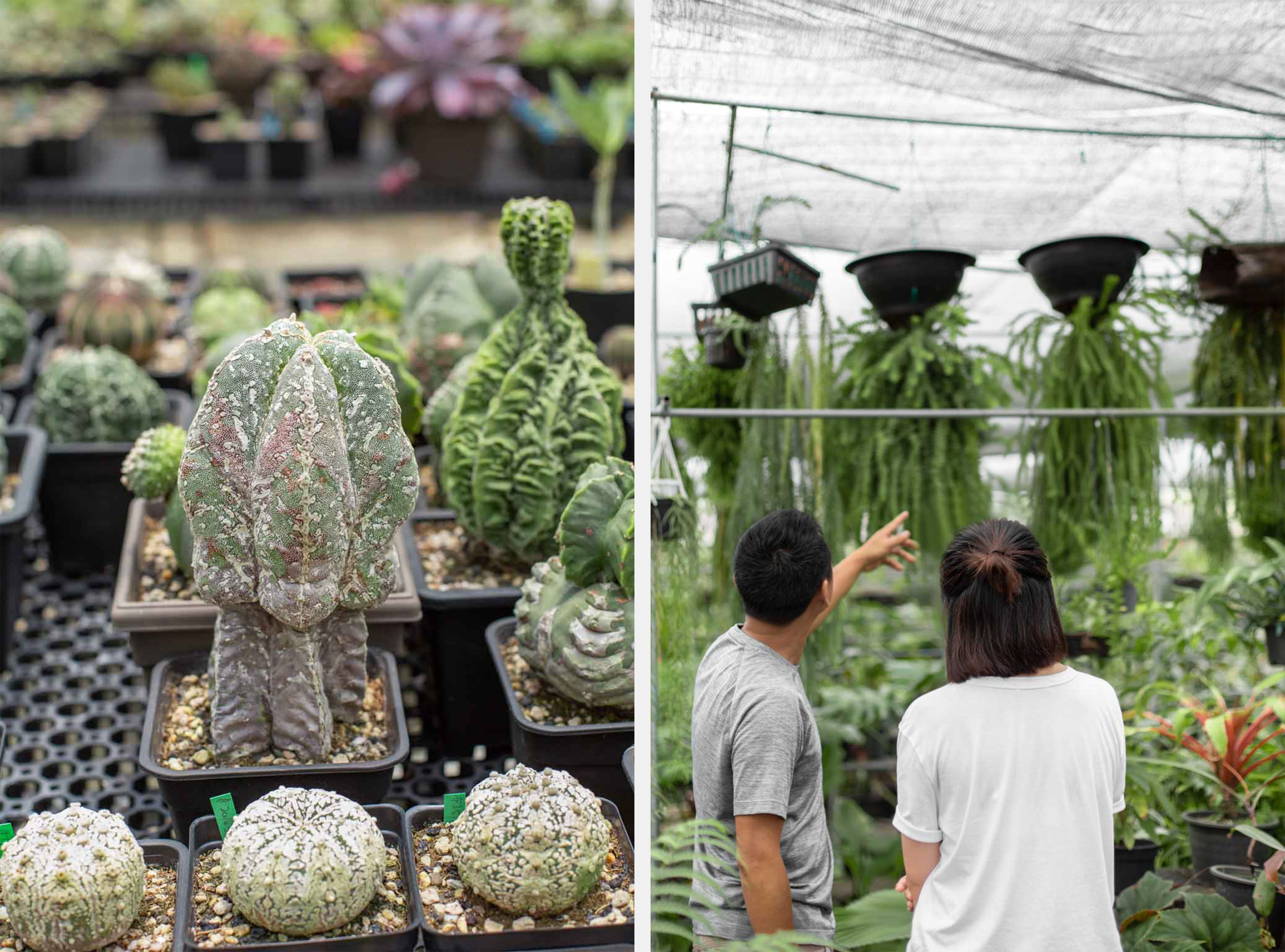 What are some of the common misconceptions that your clients have about exotic plants?
Some clients think that after paying good money for landscaping, the plants will grow well on their own without any care or maintenance. Unfortunately, the plants do need proper watering, especially after they’ve just been planted. For exotic plants, there are some customers who have asked us how long the plants can last and it shocks us every time. Some people think that these exotic plants have a short and limited lifespan and are not meant to grow well. We try our best to educate our customers so that they understand that the plants can live and grow for as long as they are given the proper care and growing conditions.

What are some challenges you foresee in the near future? We’ve seen the government acquiring land from farmers for redevelopment—will relocation and other issues be a problem?
This is probably the biggest challenge that we will face in the near future, as we’re a small company and cannot afford to bid or tender for a large piece of land. The Agri-Food & Veterinary Authority (AVA) and NParks have begun to restructure the land parcels in the Sungei Tengah area. We are currently renting  land from Heng Soon Farm, one of our neighbours, and no one has any concrete plans or knowledge as to exactly what will happen. 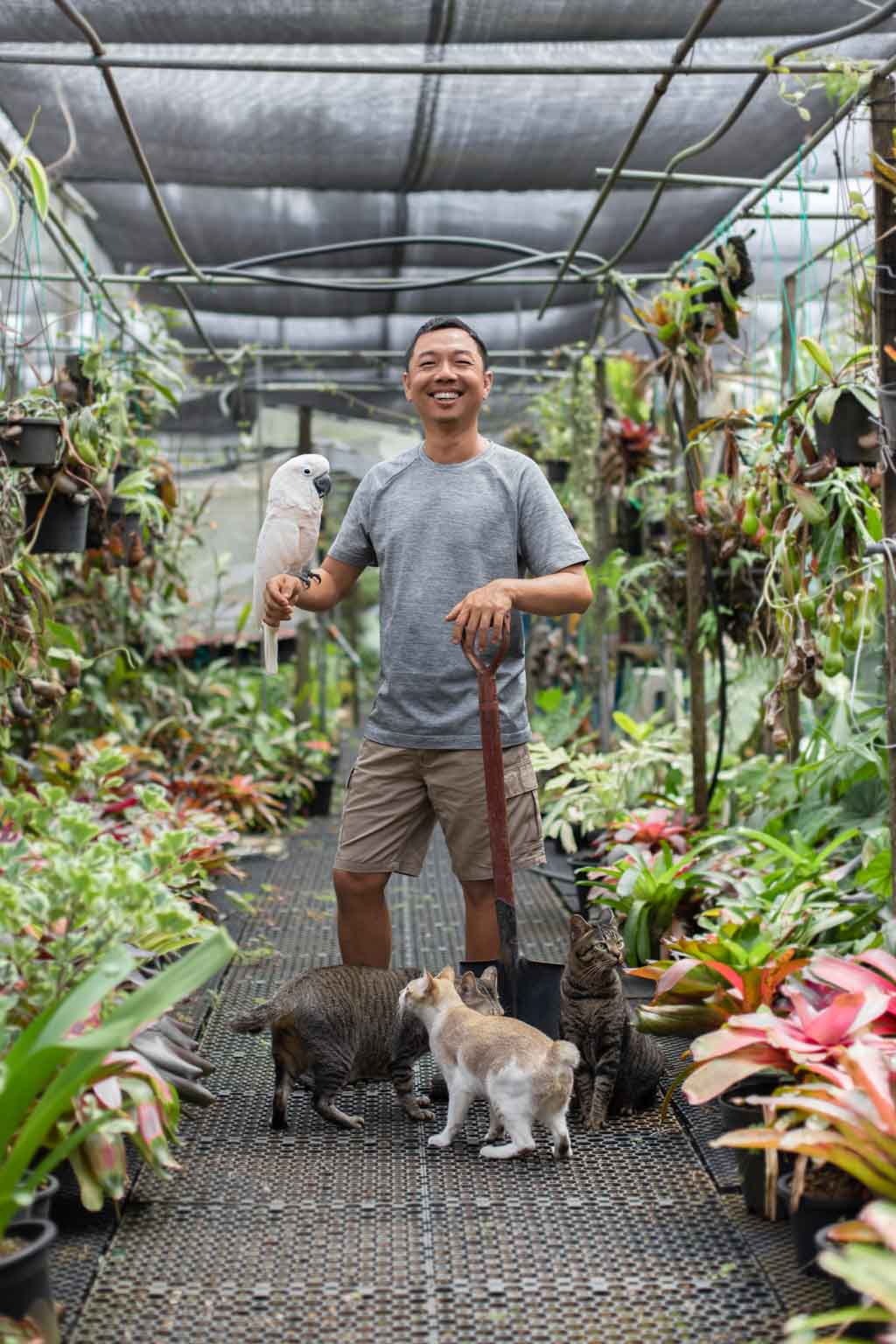