A common silver lining we’ve heard from our Shentonista audience regarding the Circuit Breaker is the extra time they’re now able to spend with their families. More of us have been bonding over precious lunches, or spending the time saved from commuting to catch up on conversations.

Yet while some families find that the distance between them has become easier to bridge, Thomas and his family are still far apart—7,788 kilometres apart, to be exact. With Thomas currently helming Hanak Education, a missionary school in Soroti, Uganda and Jermaine, his daughter, back in Singapore, family time for them is texts sent back and forth over WhatsApp (Thomas’ most used app according to Jermaine) and regular family prayers on Sunday (a time that Thomas looks forward to the most).

We sat both of them down for a little catch-up, finding out from them how they’ve been staying together as a family through thick and thin, across time and distance. 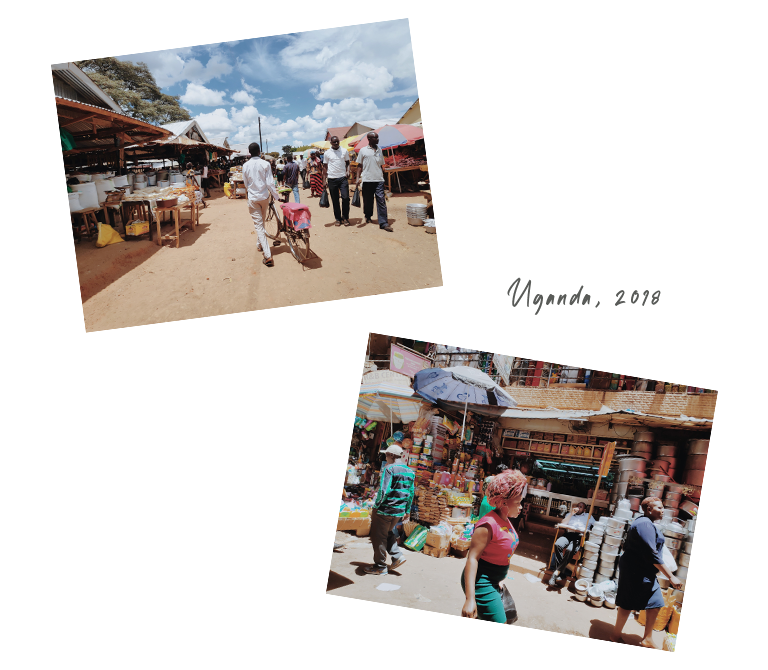 Shentonista Team (S): Let’s start off by talking about your connection with Uganda. Both of you share a history with the country, but in different ways—tell us more about that.
T: As you know, I’m currently working in education—a few years back, I came over to Uganda to set up a school. This is my second trip here, my first was back in 1994. At that time, a church friend who went to Uganda discussed his trip with me, and that was when I felt the calling to come to Uganda.

I brought my family with me—at that point, it was only my wife and son—and my wife got pregnant with Jermaine then. We returned to Singapore in 1996, after Jermaine was born.

J: Because I was born there, I feel that I’m physically connected the location. It’s always been a very special part of my life. I grew up hearing stories of the place, so it’s always been familiar.

T: About four years back, I worked on a project where I delivered education systems to villages in rural Malaysia, which had minimal access to the internet. After the end of that project, I felt like this was something I could do for more countries. That was when I felt that I should bring over this knowledge to Uganda.

J: That also gave me the chance to finally go back to Uganda last year, to see the place for myself. It felt like I was going back home even though I didn’t stay there for a long time.

T: She was actually trying to find a job in Uganda, but no one wanted her before her visa expired (laughs). 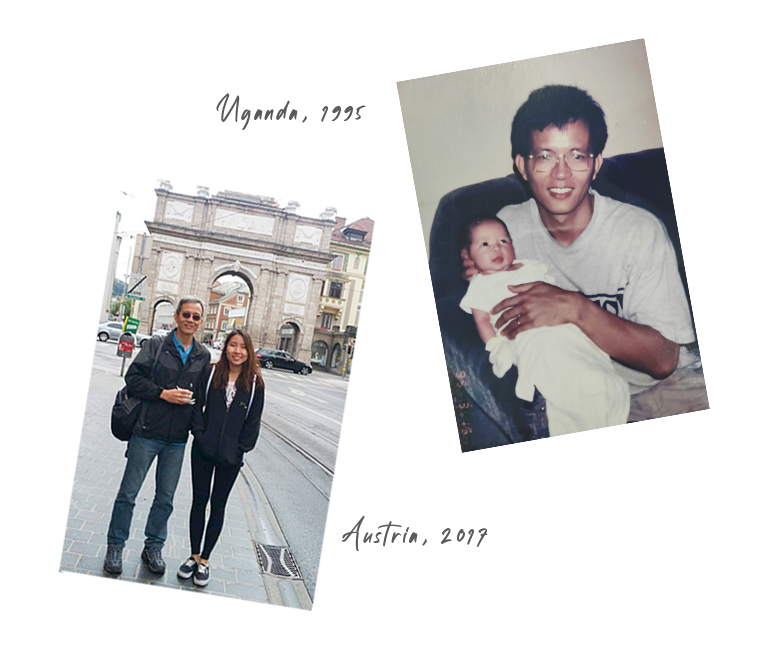 How do you think your relationship has changed since Thomas’ move to Uganda?
J: I wouldn’t say there’s a huge difference—I did my university education in Japan, so our family’s been communicating over long distance for around six years now. I think we got used to phone calls and text messages.

T: We usually text each other, because the internet bandwidth here is really low, which makes it hard for video calls. My plan is to go back to Singapore once a year, and I had been hoping to go back in May, but we’ll have to push it back to December.

We also have a time set for family prayer—it’s every Sunday, around 8PM, and it’s something I look forward to every week. That’s the time we share about our week and catch up. I’m hoping to go back in December this year, if the situation improves. 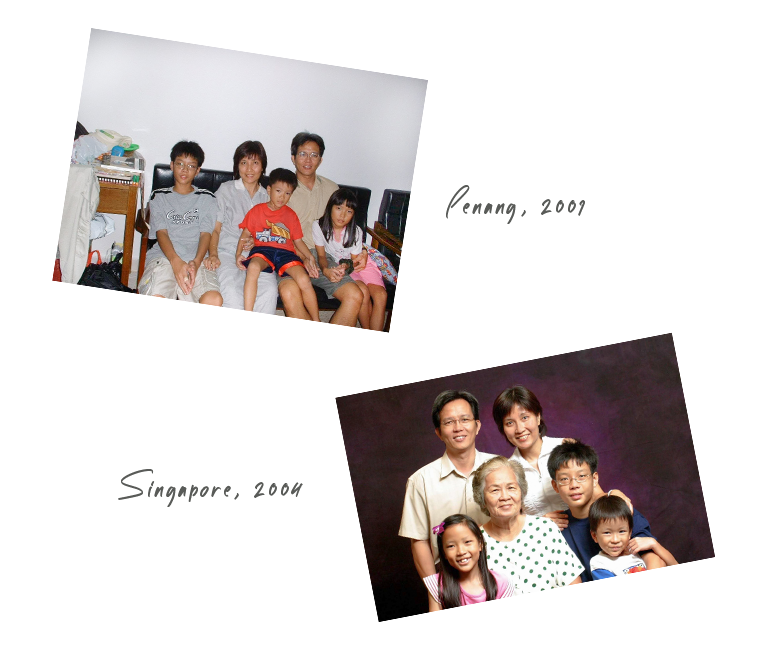 S: Thomas, share with us more about some things you miss the most about Singapore.
T: The one thing I miss the most is family. I miss the food as well—I’ve tried to look for Singaporean food here also but it’s not the same, of course. I mainly miss hawker food, because you can just go out to the coffee shop and takeaway, even during lockdown. Here, you have to make do with imitations.

S: How would each of you describe what ‘home’ means to you?
J: Home isn’t tied to a place anymore, because I’ve been moving around for the past six years. For me, it’s just a space where I feel safe, comfortable, and where I can feel complete. A place where I don’t have to put up a front or fit into a certain mould. So home is more about the people than the place.

T: I’ve been travelling for work for many years so home is definitely where the family is. When I was in Uganda with my family 25 years ago, this place was home. When we back to Singapore, that was home. Home is wherever I can come back to family. 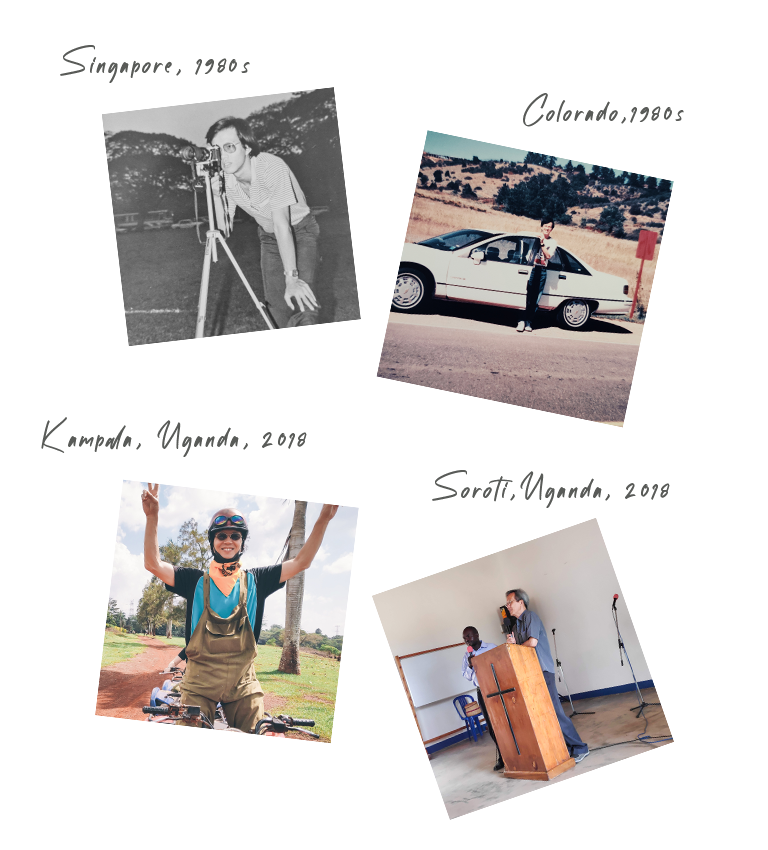 Next, we asked both of them a set of quick questions in a lightning round, where we uncovered quite a few secrets—and some of Thomas’ lighthearted complaints.

Describe the other person in 3 adjectives.
J: Self-amused, patient, and selfless.
T: Extremely smart, independent but at the same time, she’s quite guai (obedient).

Something they say a lot to you is:
J: He says “aiya” a lot in general. To me, it’s usually “okay lah”, usually when I ask him for something repeatedly.
T: “Ugh”. She just grunts to reply.

If the other person became suddenly famous on the news, what would it be for?
J: For him, I think it’ll be due to him building the school in Uganda, and how it’s expanding beyond Uganda itself.
T: Jermaine’s passion is in writing and international relations. So I hope she’ll be able to make the news because she wrote a fantastic article about what’s going on in the international arena.

Average time it takes for them to reply your messages:
J: Pretty fast? He’ll reply almost immediately whenever he’s awake and he’s seen the message.
T: I can’t say the same for her! (laughs) My message goes un-replied, sometimes for days! No replies, no response, because it’s the Daddy who can wait right? Occasionally she’ll reply quite quickly, and she always gets to it in the end.
J: Eventually (laughs).

What’s the most used app on their phone?
J: Facebook, for Dad.

For the final part of our interview, the Shentonista Team asked Thomas and Jermaine both to pen a letter with their thoughts on some things they are grateful to each other for, and read out a few sentences to each other during our call. 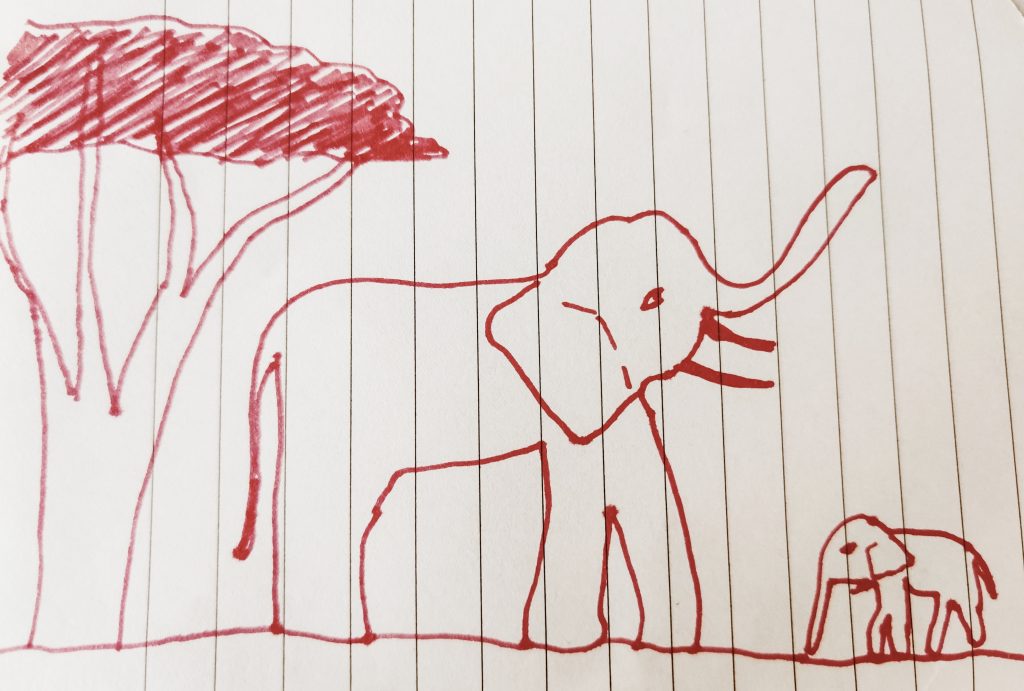 “I drew my Dad as an elephant for a few reasons. The first is that it reminds me of Africa, which will always be tied to my family. Secondly, he’s the embodiment of strength for me. If I’m looking for a guy in my life, I want him to be as strong as my dad. He’s been through many things but he always comes out stronger than he was. I’m also thankful that he’s given me the independence to grow on my own terms over the years.” 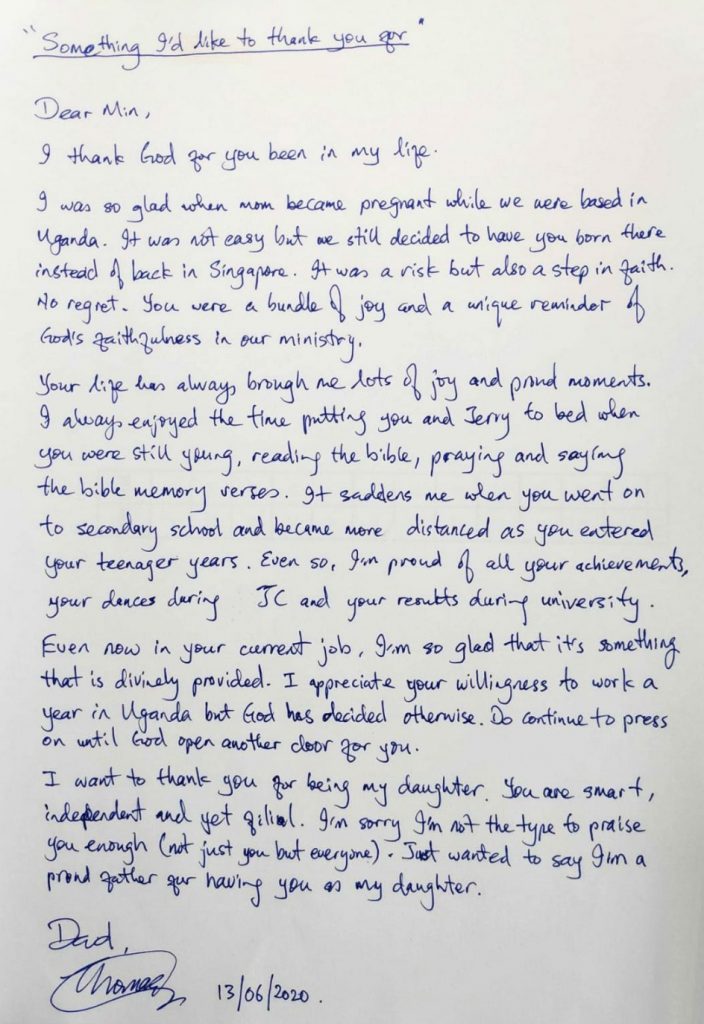 S: Thank you both for joining us on this interview. As an ending note, Jermaine, what do you think has been the biggest life lesson your father has imparted to you?
J: The first thing that comes into my mind, especially at this stage of my life, is that you can do much with very little, and that you should always do more for others. It’s not like he has an abundance of resources, but his heart has always been in the right place, which is also why he decided to go to Uganda. That’s something I want to remember as I go forward in my own career.

S: And lastly, Thomas, share with us an advice you’d like to give Jermaine to take through life.
T: Go for your passions, do what you want to achieve, but always remain in God’s will.