For those of us from the younger generation, an exasperating but amusing struggle we’re all familiar with is explaining the latest trends and technology to our parents. The Tambunan twins, Isabella and Luca, hardly face this problem however—not only is dad Iszahar the one who encourages them to try what some might consider as riskier sports, he’s also a regular guest star in their TikTok videos. Despite working as a ship broker on weekdays and helping his mother run Sabar Menanti, the go-to spot for nasi padang lovers, Iszahar still finds the time to support his children’s budding creativity.

The Shentonista team chatted with them for the second part of our ongoing Father’s Day series: fresh off an eventful family “sleepover”, the kids and Iszahar (more fondly known as Isz) came together for a fun-filled interview, where we discussed—amongst other things—how their Papa showers them with love whenever he can. 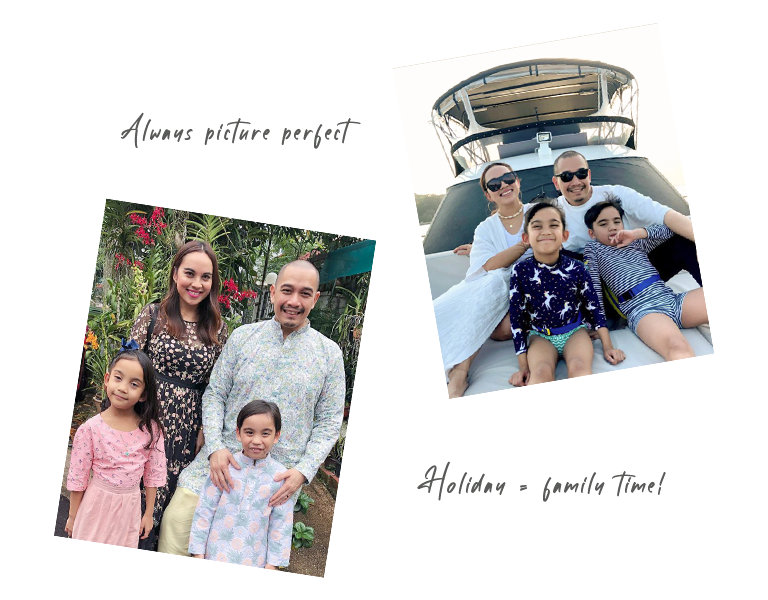 Shentonista (S): So Isz, we know you work six days a week—how do you make time to spend with family?
ISZ: So we have a few family traditions. Nasi padang’s one because, as you know, I help my mother run Sabar Menanti. We always eat nasi padang at least once a week.

We also have Friday movie night specials, where the kids hang out with us and have a sleepover in our room. We’ll watch a movie together until late in the night and wake up whatever time we want to wake up on Saturdays. Most of the time, the kids choose the movies, so it’s always different every week.

Other than that, sometimes when I’m done with work early, we’ll go for a short cycle from home to town and back home again. Before Circuit Breaker, I used to bring Luca for motocross riding every Saturday and skateboarding when we’re free.

S: Isabella and Luca, you both sound pretty athletic—tell us more about your favourite sports.
Isabella (ISA): I started skateboarding when I was four. My parents taught me how to skate, and since then, we go to the skate park and try some ramps.
ISZ: They’re still learning. Right now they’re doing the half-pipes.
Luca (L): Papa, it’s not half-pipes anymore, it’s the full one.
ISZ: They’ve progressed quite a bit. Luca also likes motor sports, and has been very into motocross lately. Whatever they’re passionate about, I try to push them in that direction. 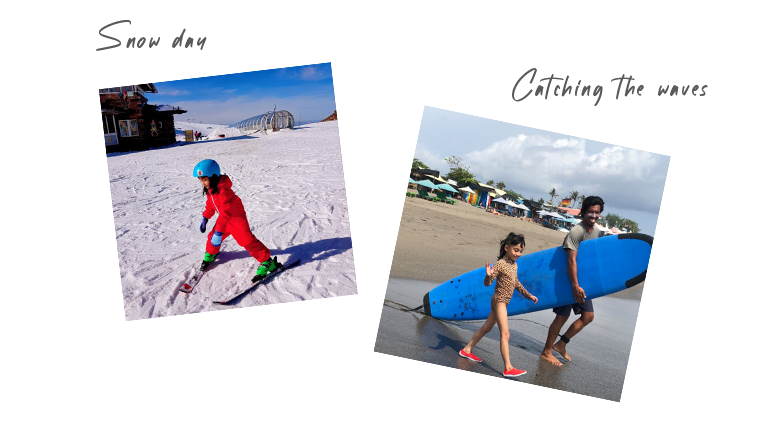 S: We know school has reopened already—what are some things you’ll miss about staying at home?
ISA: Yes. We like to eat breakfast with our Mama and Papa—
L: And wake up very late! (laughs)
ISZ: It allowed me to spend a bit more time with the kids—I got to see their characters and how they interact with their teachers, and how they perform in various subjects.

S: How do you think your kids resemble yourself and Lena (Isz’s wife)?
ISZ: Luca actually resembles my wife more while Isabella looks like me when I was a lot younger—scrawny and tall—but because of the nasi padang, my body has grown out of proportion (laughs). In public, Isabella’s an introvert and quite quiet and Luca is a bit more loud. But at home, they’re quite similar, because they’re both comfortable. 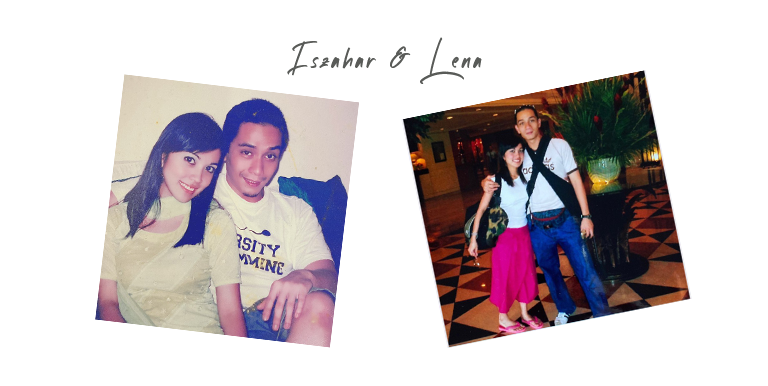 S: What do you think is something your kids have taught you over the years?
ISZ: To be patient (laughs). I learnt to have fun with them too and join them in whatever new trend they’re into. These days they’re making loom bands.
ISA: We’re making the loom bands to support Children’s Cancer Society, and to help them pay for their medical expenses and other equipment.
ISZ: We understand that because of the pandemic, there are families who might have lost their jobs. The kids’ initiative is actually to sell the loom bands and give the proceeds to Children’s Cancer Society.

S: Your kids are really trendy and fashion-savvy. Do you sometimes find it hard to keep up with them?
ISZ: Not really, I’m also a TikTok star (laughs). Sometimes, if they want me to be on Tiktok, I’ll just join. Funnily enough, even though Luca’s the more outspoken one, Isabella’s the TikTok star in the family. 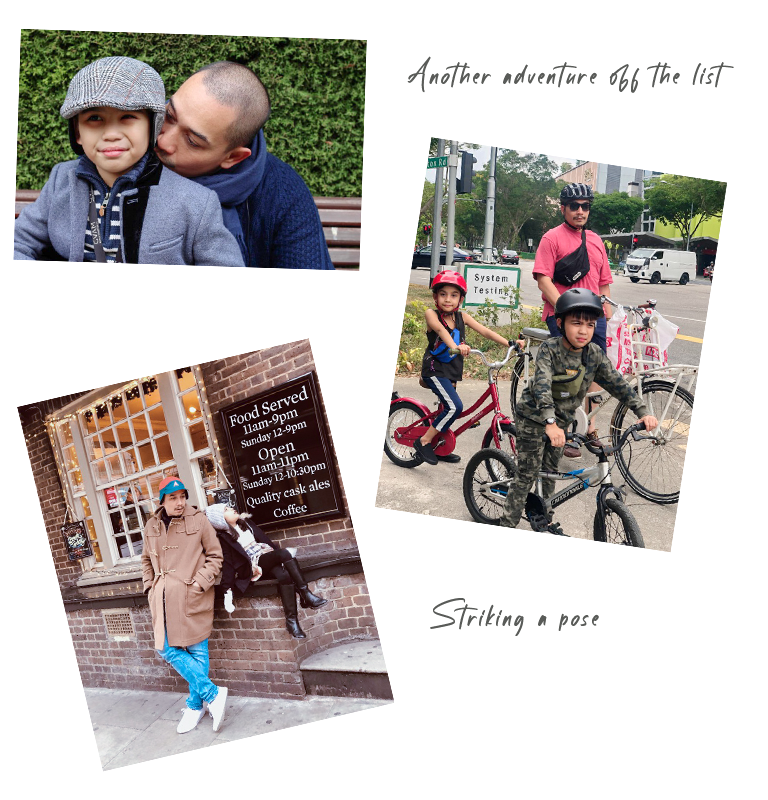 We played a quick round of rapid fire with the family, where we asked the kids some fun questions—and discovered how much Isz actually dotes on his family.

S: 3 emojis you’d use to describe Papa are:
ISA: The one that makes me laugh and cry at the same time (😂)
L: It’s the money emoji! The one where there’s money coming out from the emoji’s mouth (🤑)
ISZ: It’s because I’m an ATM, so I spit out money like the ATM (laughs)
ISA: And also the emoji with the shades, because Papa’s cool (😎)

S: How does Papa show that he loves you?
ISA: He buys for us the food that we love—like unagi!
L: And pasta and pizza and salmon! He [also] kisses and hugs us to put us to bed.

S: If you could give Papa any gift, what would it be?
ISA: A castle with glitter, where he’s the king of Glitterland! (laughs)
ISZ: She wants me to colour my hair purple and dress myself in purple.
L: I want to buy him a Porsche 911, Porsche 912, Porsche 914, a Bentley and a Rolls-Royce.
ISZ: (laughs) Luca likes to keep miniature cars as well, so he knows a fair bit about cars. Mostly retro cars, like sports cars. 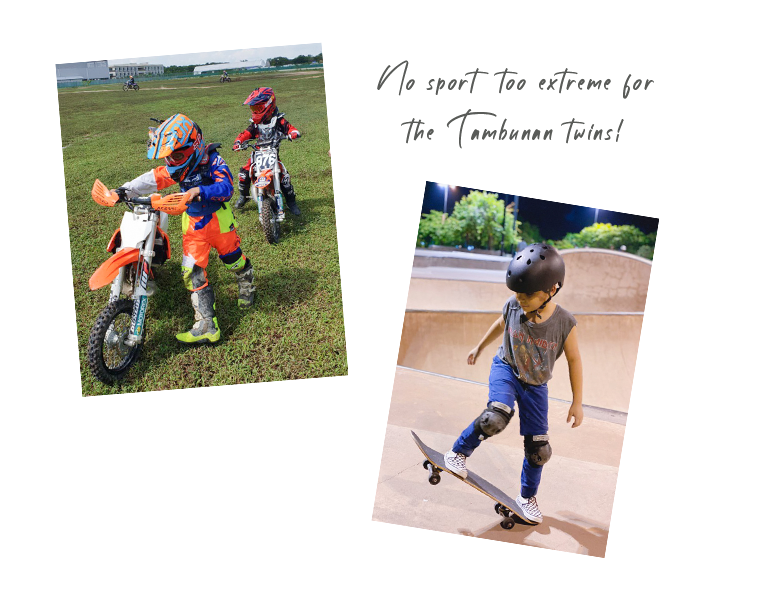 We took the time to learn a little more about the kids from Isz’s perspective too.

S: If your kids were a nasi padang dish, what would they be?
ISZ: I’d say Isabella is like ikan bakar, which is our roast fish with toppings of onion, red chili, green chili and sweet black sauce—she has a very colourful personality and never fails to make me laugh.

Luca would be tahu telur, which is basically a structure on its own with tofu inside. He’s very tough on the outside—he’s adventurous and sporty—but on the inside, he’s very sensitive, very soft, and a bit of a special boy. He’s gonna disagree, because he actually wants to be beef rendang.

S: Something the kids complain to you about the most is:
ISZ: Not spending enough time with them. As you guys know, I’m working as a shipbroker and I only have Saturdays with them at home. Time is something that I’m always trying to find.

S: What’s the biggest difference between the twins?
ISZ: Luca’s a bit more gung-ho. He likes to try different kinds of sports and if he injures himself, he doesn’t come back complaining, he’ll try again to achieve whatever he’s trying to do—[whether] it’s on a bicycle or a skateboard. Isabella is very musically-inclined; I’m very surprised because that’s not really in my nature. 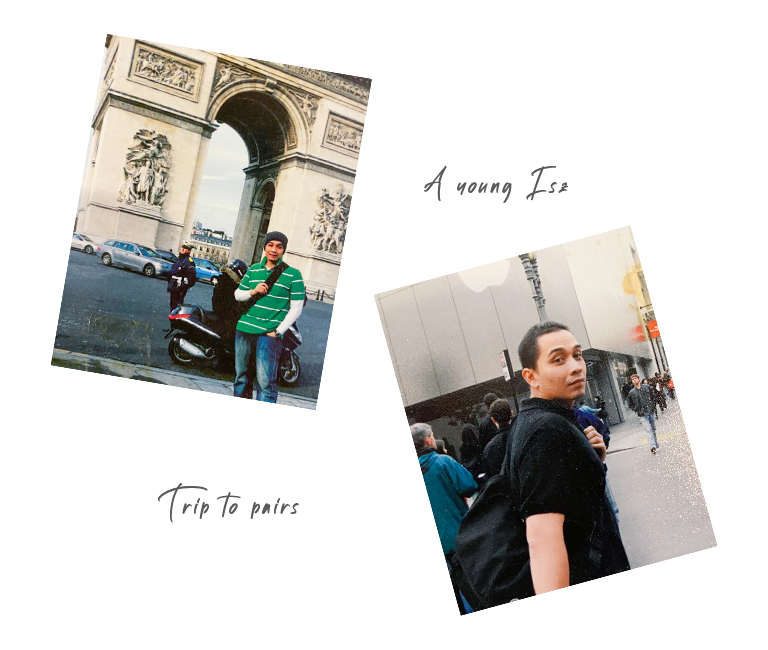 We asked the kids to make a little Father’s Day card for Isz, which they shared with us for the first time in their interview. 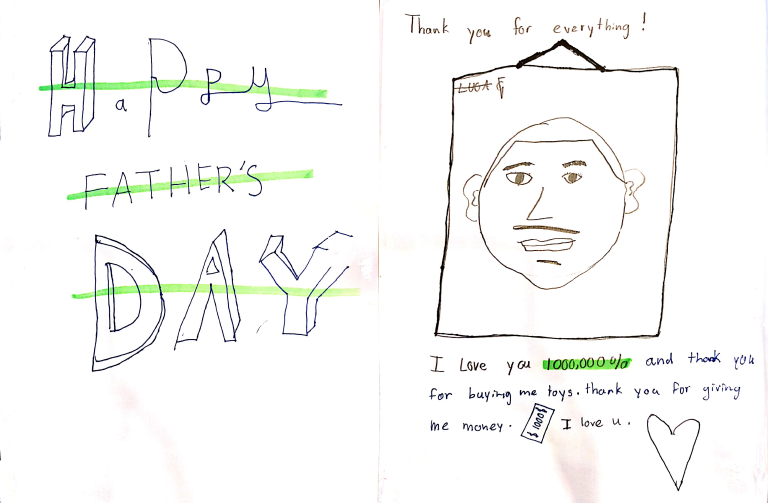 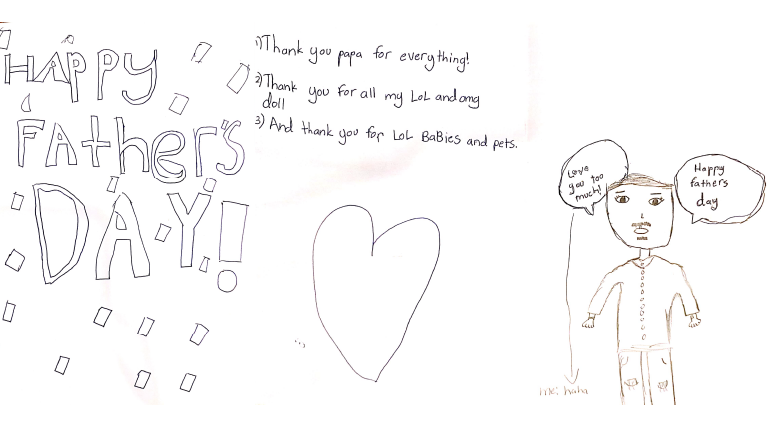 Isz also took the time out to pen down some of his thoughts in a card of his own, with a drawing that signifies his wish of seeing them hold each other’s hand throughout life. 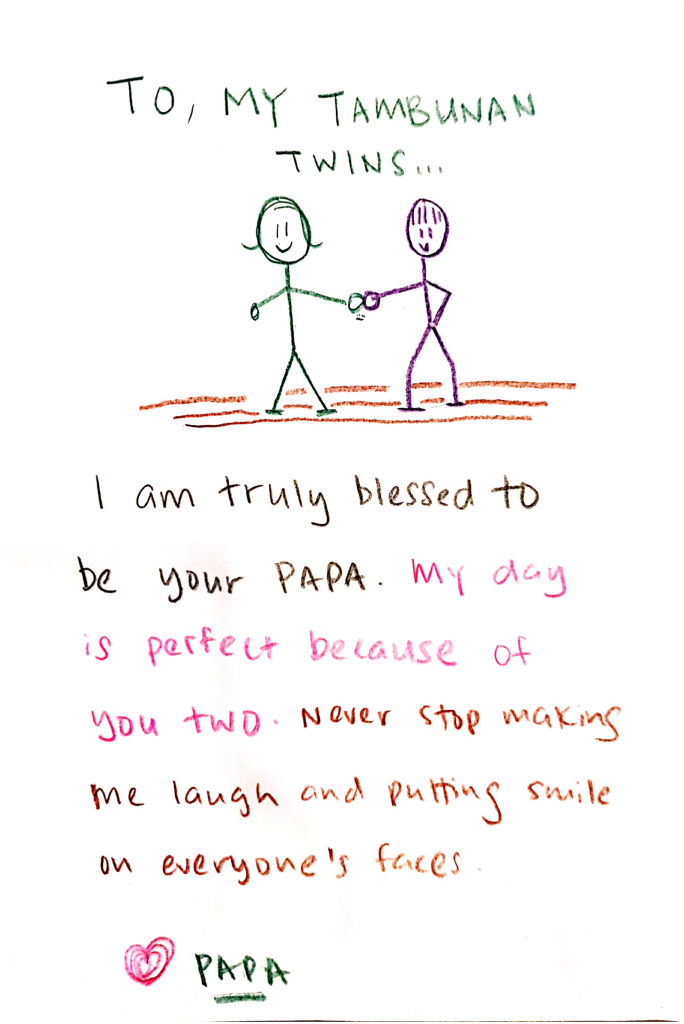 S: As a final note, Isabella and Luca, what do you think has been the biggest life lesson your father has taught you?
ISA: Never give up. Even if you fail, keep on trying harder.
L: Always be a kind person and never give up on your dreams.

S: And Isz, as a father, what’s one advice you’d like to give your kids to take through life?
ISZ: I’ve always told them to never give up, because once you give up, you’ll never see the potential for what you can do. Always be nice to people, always be kind to people—it doesn’t matter where you reach in life, the most important thing is to respect people and to be nice.