The Covid-19 pandemic has stretched on for much longer than most of us had anticipated, but the ones who feel its length the most are our healthcare workers. Over the months, there’s been an outpouring of tributes, waning and peaking according to changing emotions of worry and gratitude. Some of us might even have participated in some of these tributes, but what we’ve come to realise is that we tend to focus on the work of healthcare workers within the four walls of the hospital or clinics—indisputably crucial—but often forgetting that they are also people like us, with their own worries, hopes, fears, and dreams. In this series, we’d like to honour the person behind the scrubs, discover what drives them in this fight against the pandemic, and hear their stories as individuals. 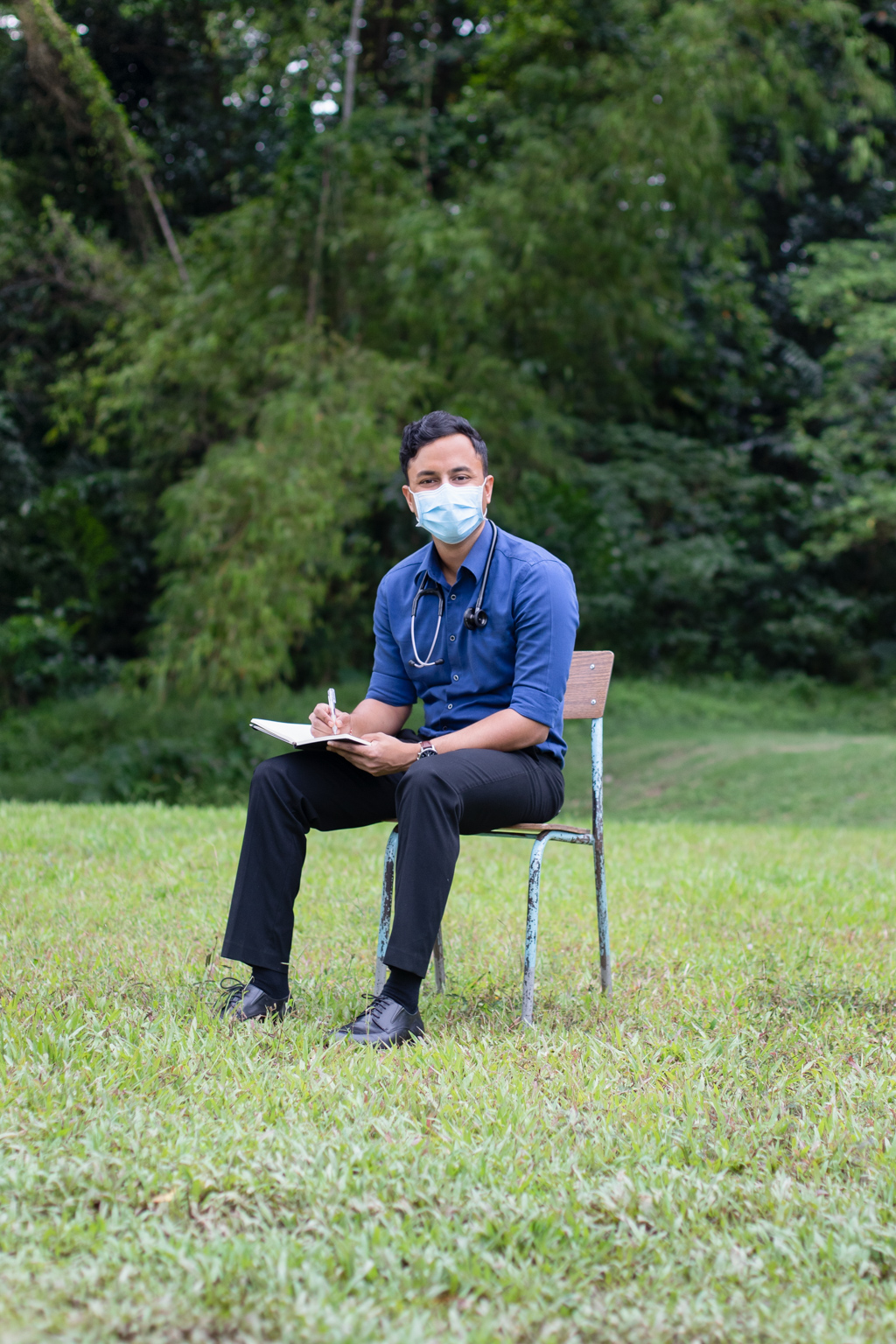 In the first feature of this series, we speak with Nishanth, a medical officer who shares a passion for medicine and music. As someone who stood at the frontlines of the pandemic last year, Nishanth is one of the many healthcare practitioners working hard in keeping us safe. Aside from his medical background, Nishanth has a creative side to him. Music has been a part of Nishanth’s life since young, It’s an important creative outlet that allows him to recharge after a stressful day at work, where emotions can run high. 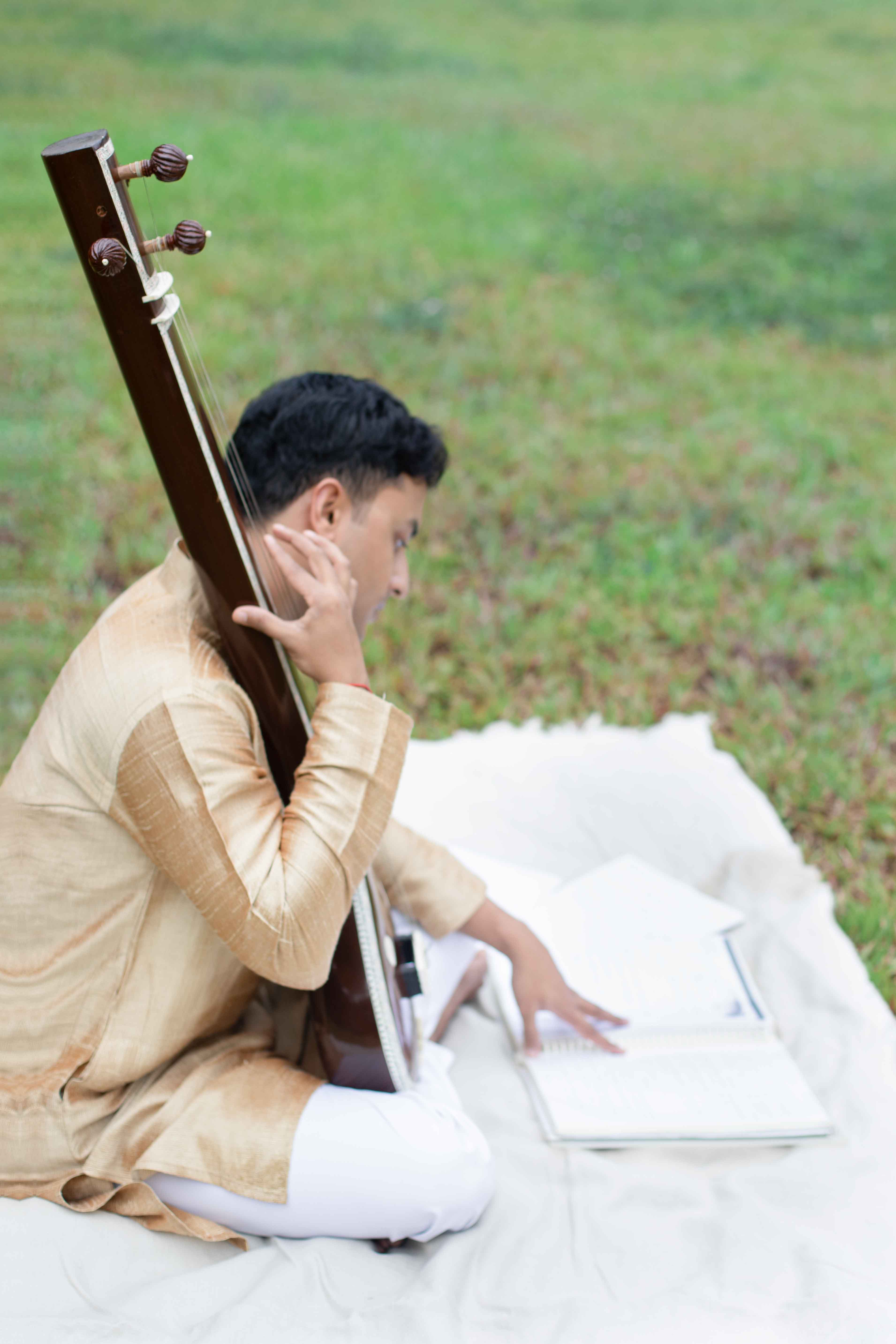 We met with Nishanth in a park near his home, the setting for a music video that he once filmed and edited for his rendition of an Indian pop song. With a row of trees as his backdrop, the sounds of traffic on the bordering roads of the park seemed to fade away as Nishanth lifted his voice in song, accompanied by the gentle strumming of the tambura. Afterwards, we walked over to Nishanth’s home with a humble home studio in his bedroom—here, he crafts his music and records his songs, seeking solitude after a busy day at work. Over snacks graciously prepared by his mother, we spoke with Nishanth about what music and medicine mean to him, and his dreams for the future. 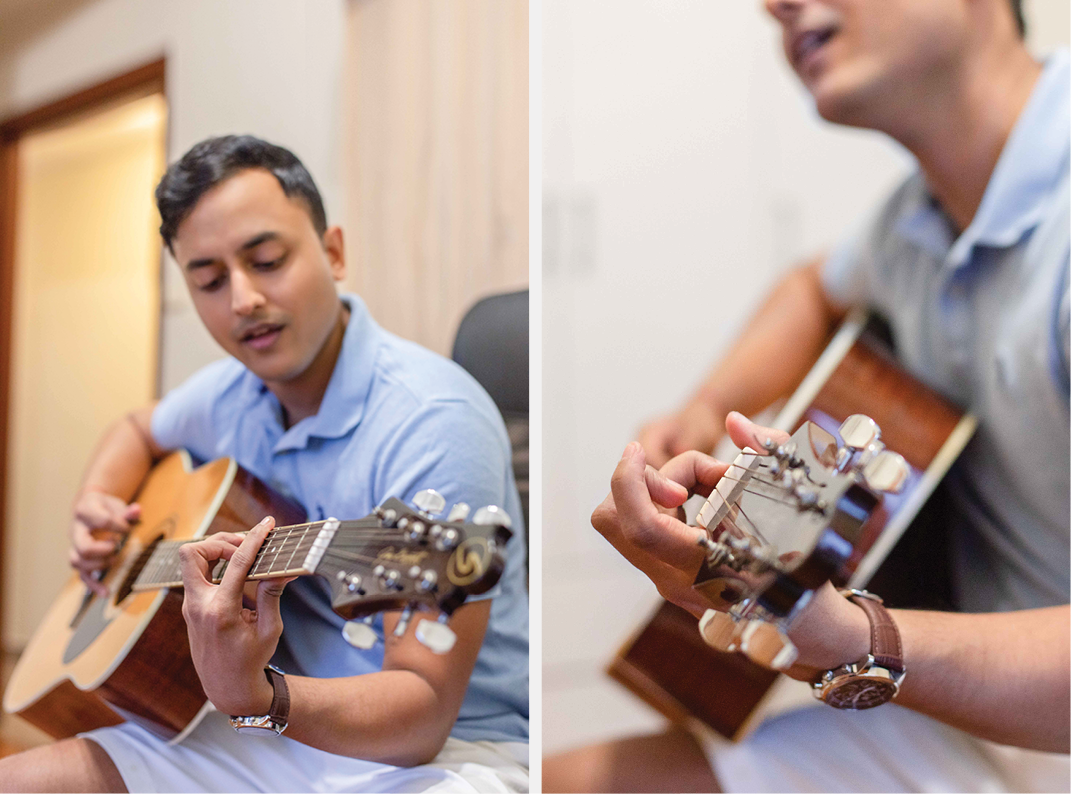 What does a typical day or week look like for you? What are some challenges you face as healthcare professional while pursuing music?

Currently, I am working as a medical officer serving my NS. Before this, I worked at the hospital which was a completely different experience. My main focus then, was to treat acutely ill patients in the hospital. The pandemic made this both harder and riskier, in a way.

Working in the hospital required a number of overnight shifts and unpredictable hours. Now, my working hours are more predictable, and this has afforded me the ability to allocate more time exploring music after work. 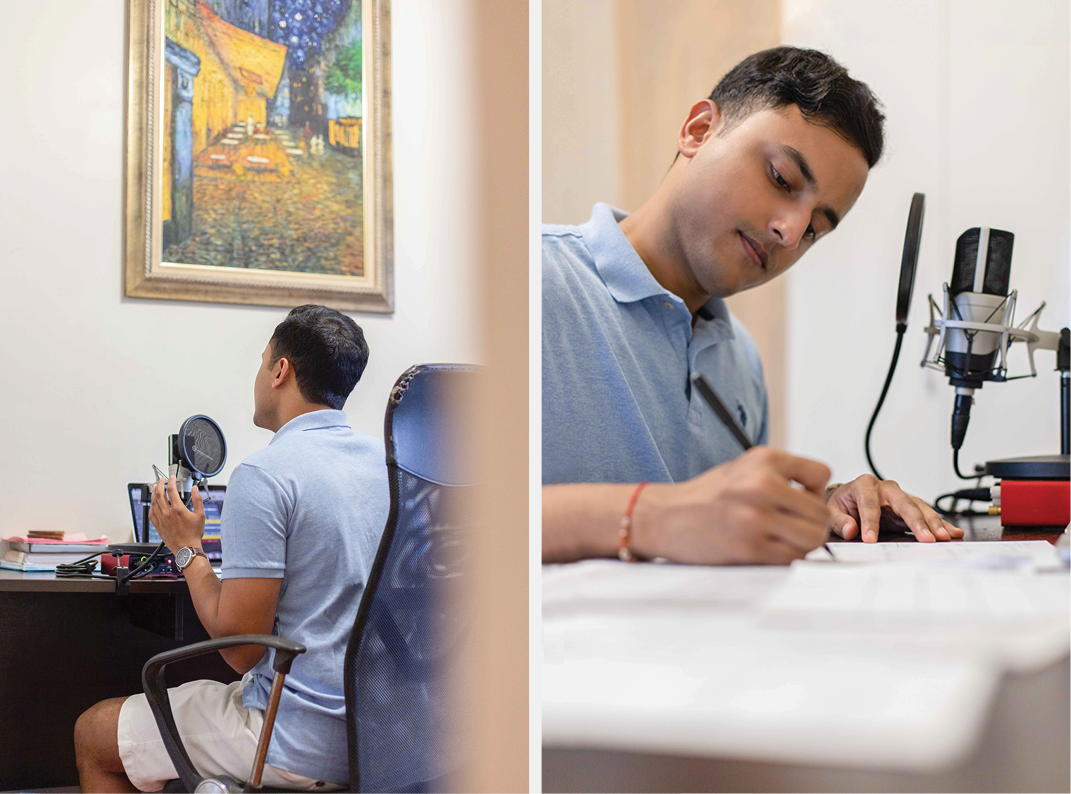 We’ve lived through a year and a half of pandemic—can you sum it up with three words?
I’d say that it has been challenging, eye-opening and inspiring. Challenging—we all know why. The social isolation brought during lockdowns; the fact that you can’t meet your friends from overseas, or even your friends in Singapore.

As a medical practitioner in the first few months of the pandemic, we didn’t know how lethal or infectious Covid-19 would become. At that time, there was a fear and challenge of dealing with the possibility of exposing our family members to the virus when we return home from work.

It was eye-opening and similarly inspiring because I have seen many peers take up the logistical challenge of working on Covid operations like mass vaccinations, working in the dormitories, or continuing to work in the critical care unit in hospitals. Even though it’s been very challenging socially and even financially for some, the resilience of people is what amazes and inspires me. 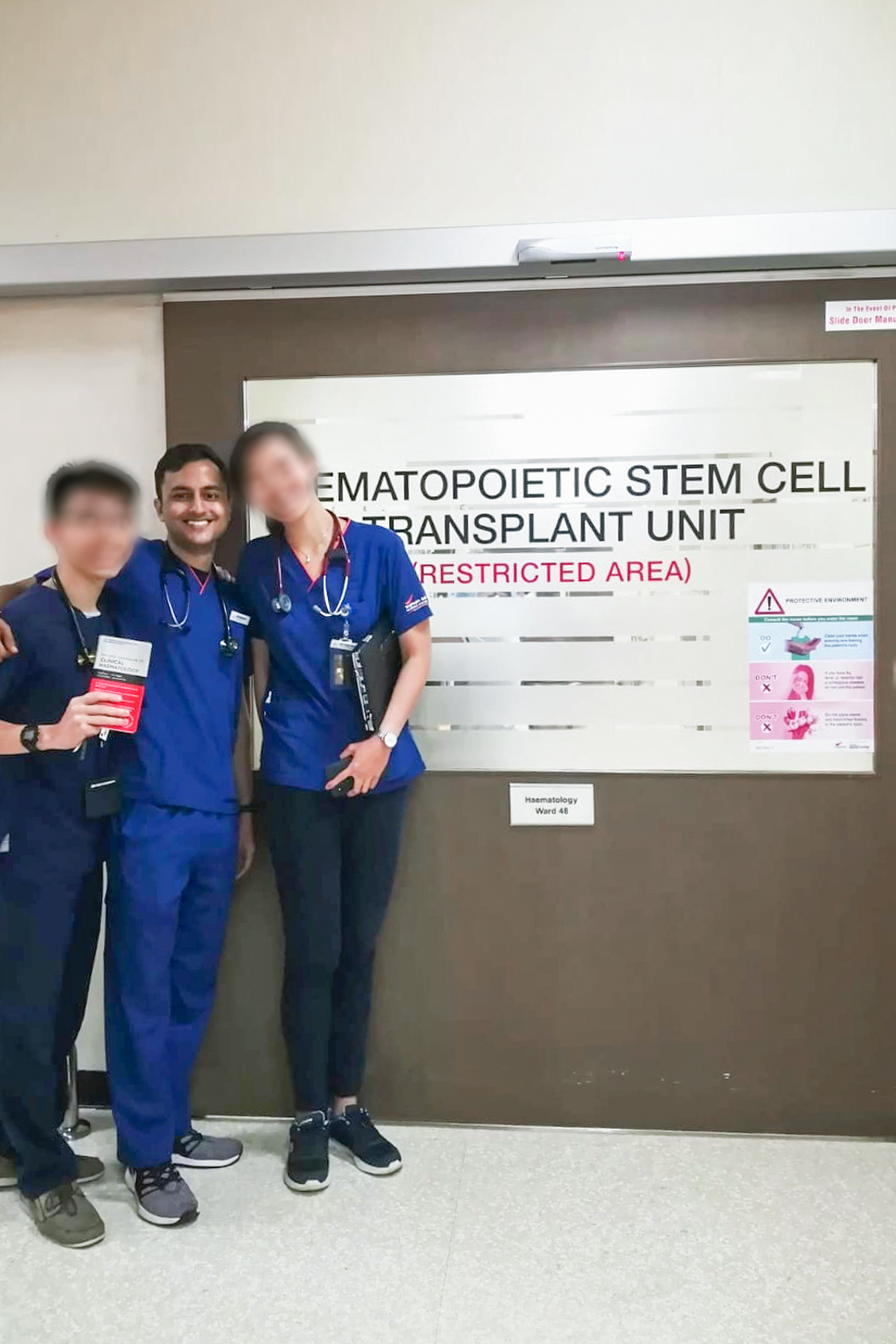 Is there an area of specialty in medicine that you’d like to pursue?
At this point, I’m interested in cardiology. It’s fast-paced as you can imagine that people who have heart problems may need urgent treatment. There’s also a lot of scope for interesting procedures and innovative solutions that can be done to make people better. Ultimately, I think it’s a very impactful field.

Do you feel that your approach to medicine has changed since pre-Covid days?
We’re now even more particular about hygiene and infection. We’re in full personal protective equipment all the time when we’re seeing patients—which is extremely challenging for a healthcare professional. The gown makes you sweaty, the mask leaves scars, you’re wearing goggles and gloves—it’s very uncomfortable. It also creates a barrier between the patient and doctor as the patient doesn’t know who the doctor is the doctor is as they cannot see the doctor’s face. 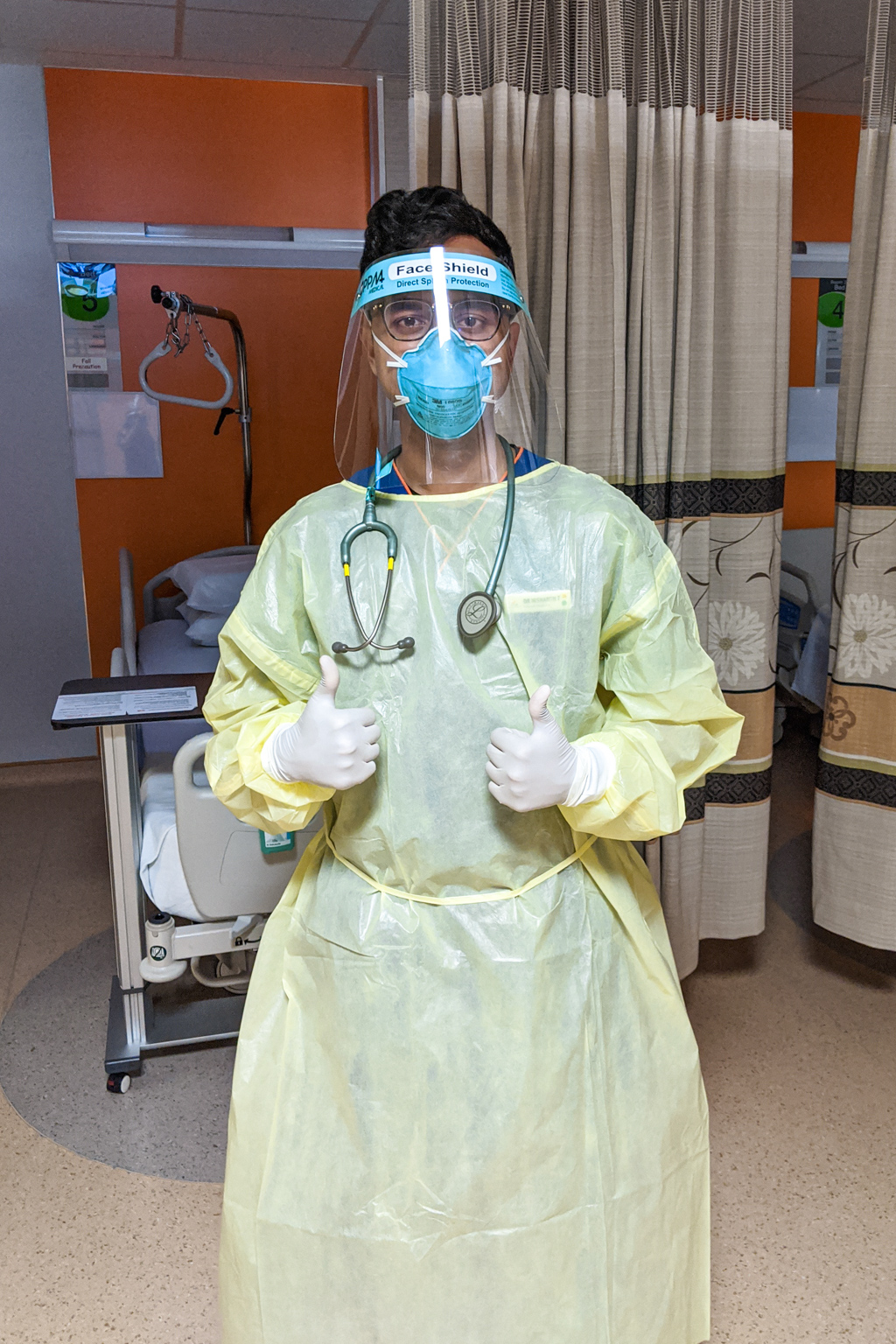 Does your music affect the way you approach work, and vice versa?
I’ve been a musician way longer than anything related to medicine (laughs). I’ve been learning music since six years old, so I’d say that my approach to everything has been framed by music. The biggest benefit of having a serious hobby like music is that it relieves stress after work, especially when you’re working in a high-octane environment like medicine. Music is like ‘me time’ in a way, and it’s also my creative outlet.

Have you felt supported by your parents to pursue both music and medicine?
100%. In fact, when I was in my early teens, I thought that music wasn’t for me. I wasn’t quite a matured musician then. I found the learning phase a little tough. I played sports as well and to me, music wasn’t as cool as sports. It felt like an additional burden to me, but my parents thought I had a talent for it and that one day I’d see the light (laughs). I eventually did, thankfully, maybe when I was 16 or 17, and I really started loving it. My parents didn’t persuade me to only focus on one thing even during major examinations; they just left me on my own and let me balance it out. 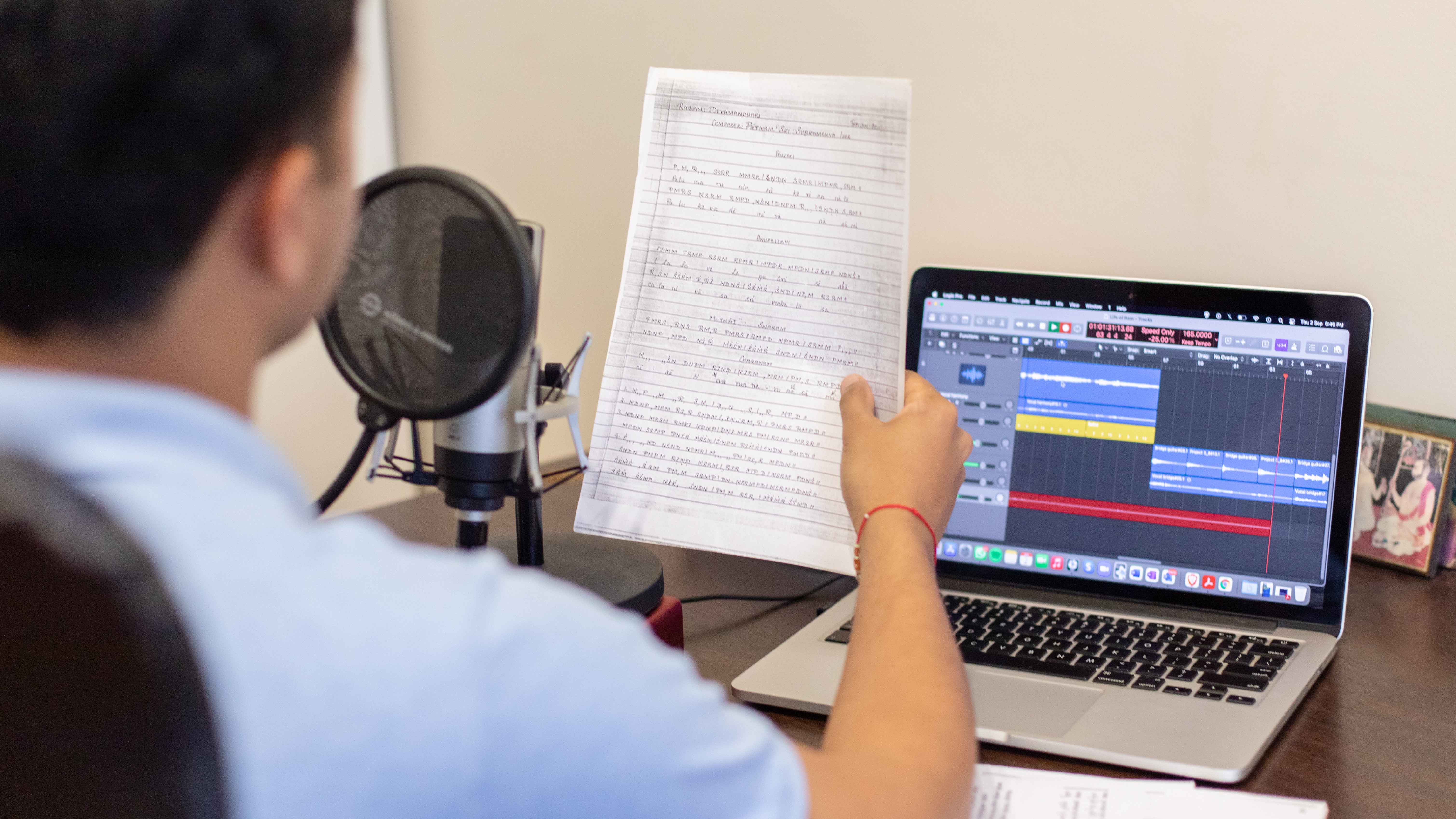 Do you remember the very first time that you encountered music? What was it that inspired you to pick it up?
According to my parents, I used to listen to songs on the TV and sing them.  Apparently, it was pretty decent for a five year old who was hardly speaking properly and that was when my parents decided to put me in music class. So it wasn’t a personal choice (laughs).

Can you tell us more about traditional Indian Carnatic singing—the history, technique or skills that you need?
Carnatic music is basically Indian classical music from South India. It’s a classical art form that’s several thousand years old. What differentiates it from Western music is that it’s quite vocal-heavy. Voice is used as the main instrument on stage—just your voice and one other instrument is enough to fill the hall with music. Sometimes Carnatic singing doesn’t involve any lyrics; sometimes it’s just demonstrating a scale or bringing out a mood. 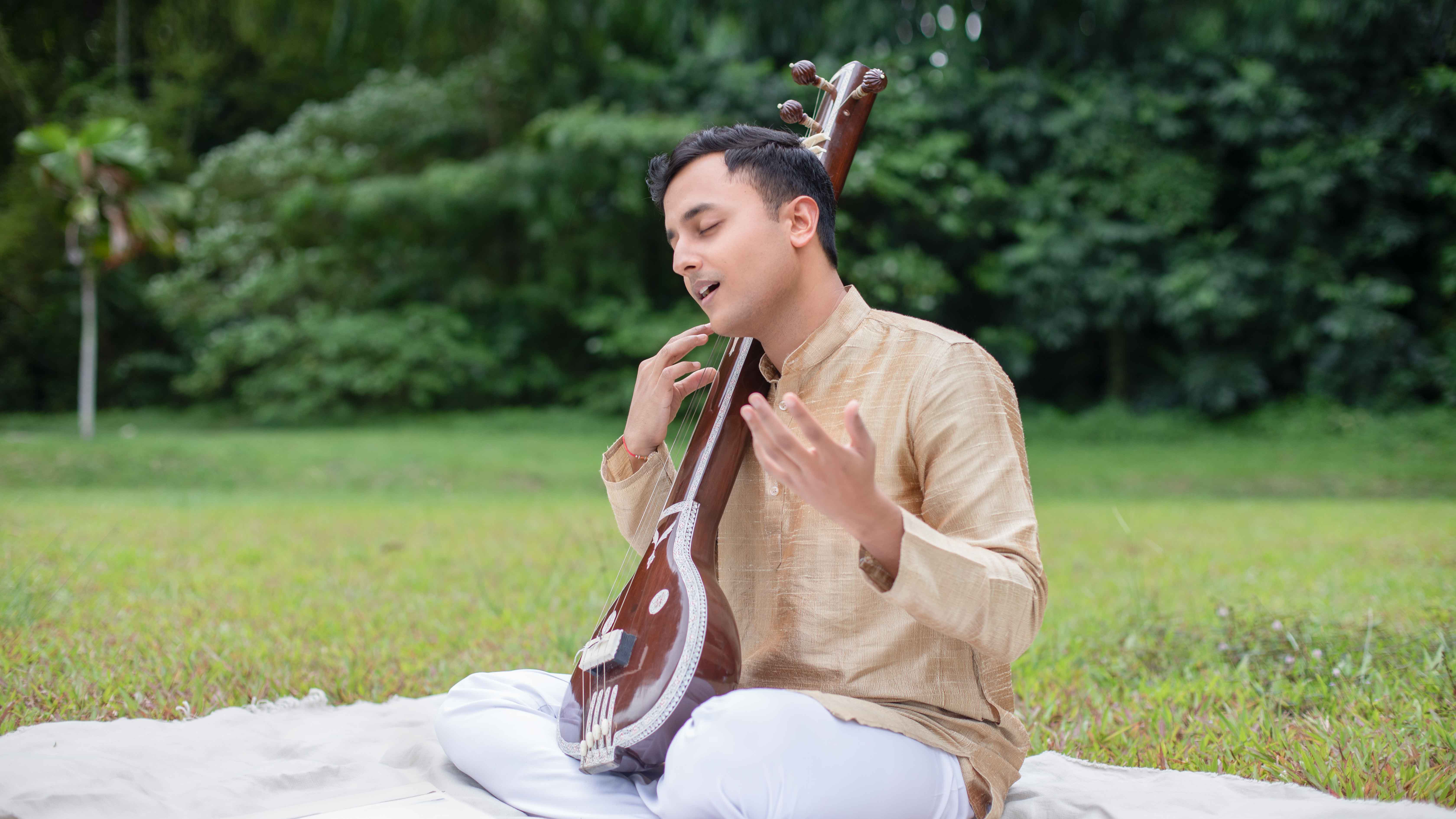 It’s similar to playing a blues solo on the guitar where you can play whatever you want. The best musicians perform an entire two-hour concert with just their voice. They don’t need any instruments and are able to bring out a lot of emotions through the way they sing It’s a huge challenge for voice training, and I’ve spent almost twenty years training my voice.

Is there a common misconception about the music that you make and sing?
Some people think that it’s Bollywood music, which is vastly different. Bollywood music is basically Indian pop music. Another thing that people assume is that I mainly play instruments. The truth is that I spend 90% of my time training my voice. 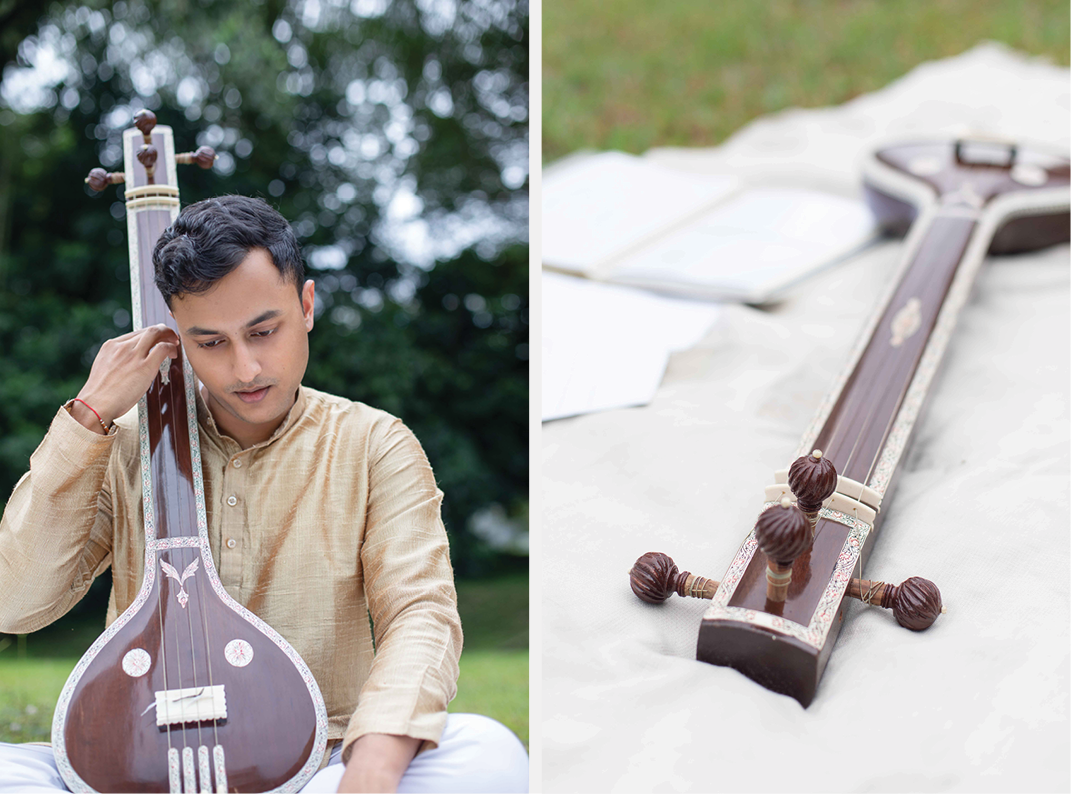 Can you share with us about the tambura?
The tambura is a very beautiful four-stringed instrument mainly used to accompany the voice. It’s not a standalone musical instrument in Indian classical music but provides the background for the vocals to flourish. One of the challenges for professionals is to find a tambura with a tone that suits their voice, and at the same time, develop their voice in a way such that to match the tone and timbre of their tambura.

What have you learnt from the art of practising traditional music?
Firstly, it has taught me that the voice is an incredibly versatile instrument on its own that people don’t really recognise. Secondly, I think any creative art form, like music, allows you to explore new things and really energise you. It’s a creative outlet for you to vent frustrations and any other emotions you might have from work. In a way, it refreshes you for the next day.

What are some of your goals or dreams in the near future?
I hope to complete my specialisation in cardiology. In the area of music, I’d like to give some large-scale performances—I’m looking forward to performing to crowds again. I’ve been part of virtual performances but they don’t have the same effect! Also, if I can continue to make improvements in music, I hope to perform on a bigger stage. I’ve performed at the Esplanade Recital Studio, and it’d be really nice if I could perform in the main hall. I’d also like to continue to work on my approach towards pop music or Indian Bollywood music. If I could produce a few more songs, I could come up with an album! 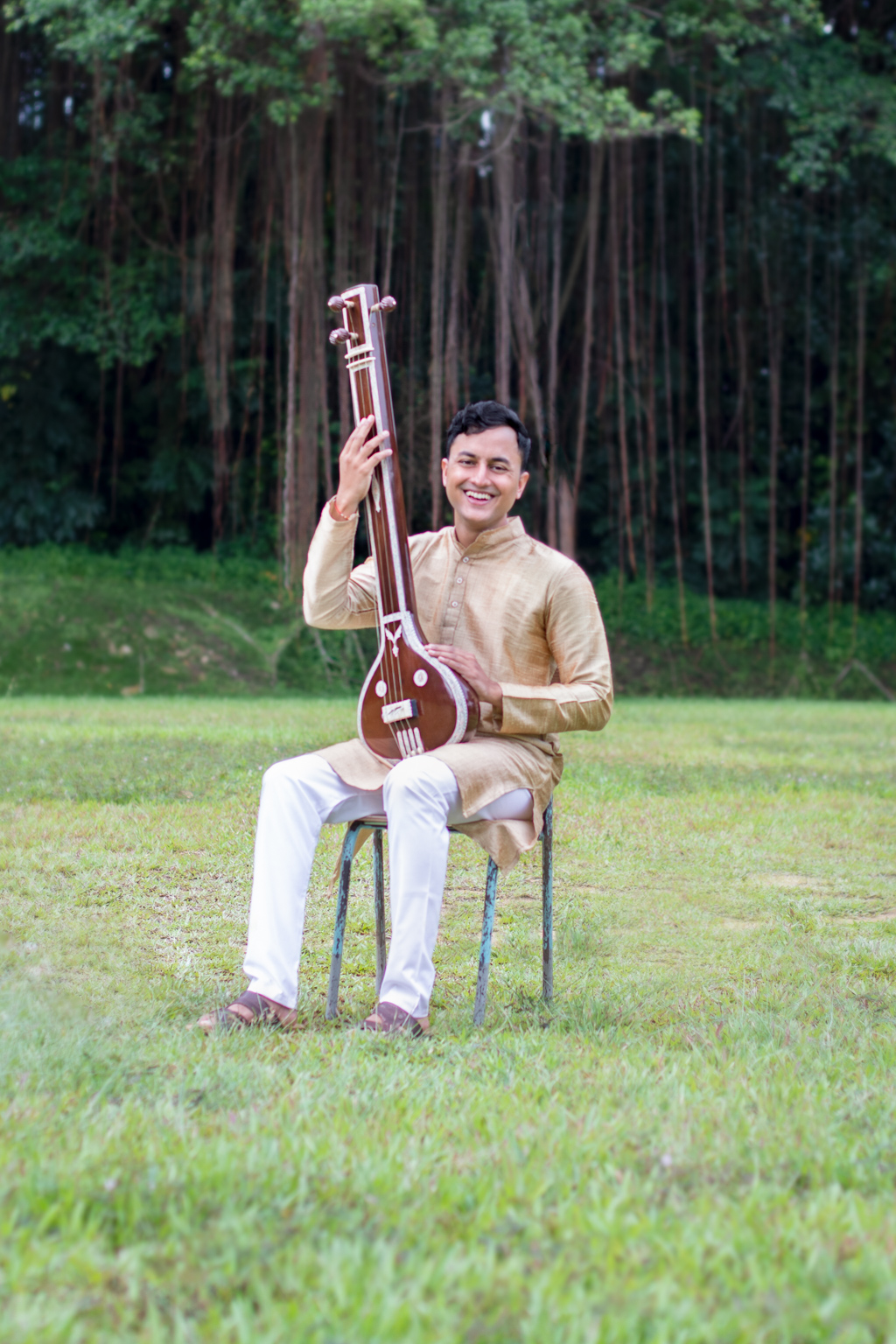