In this September issue, we bring you novels set in difficult and dangerous times. From wartime literature to a modern day memoir to fictional dystopian societies, the worlds depicted in these books might seem far removed at first glance, but upon closer inspection, we may find parts of our own lives reflected in the journeys of each protagonist. In the face of uncontrollable circumstances, however, the stories tell of grit and positivity. People have an incredible way of overcoming obstacles, pursuing love, and fighting for what’s right. As we heal from the pandemic, these are some books that inspire us to continue hoping. 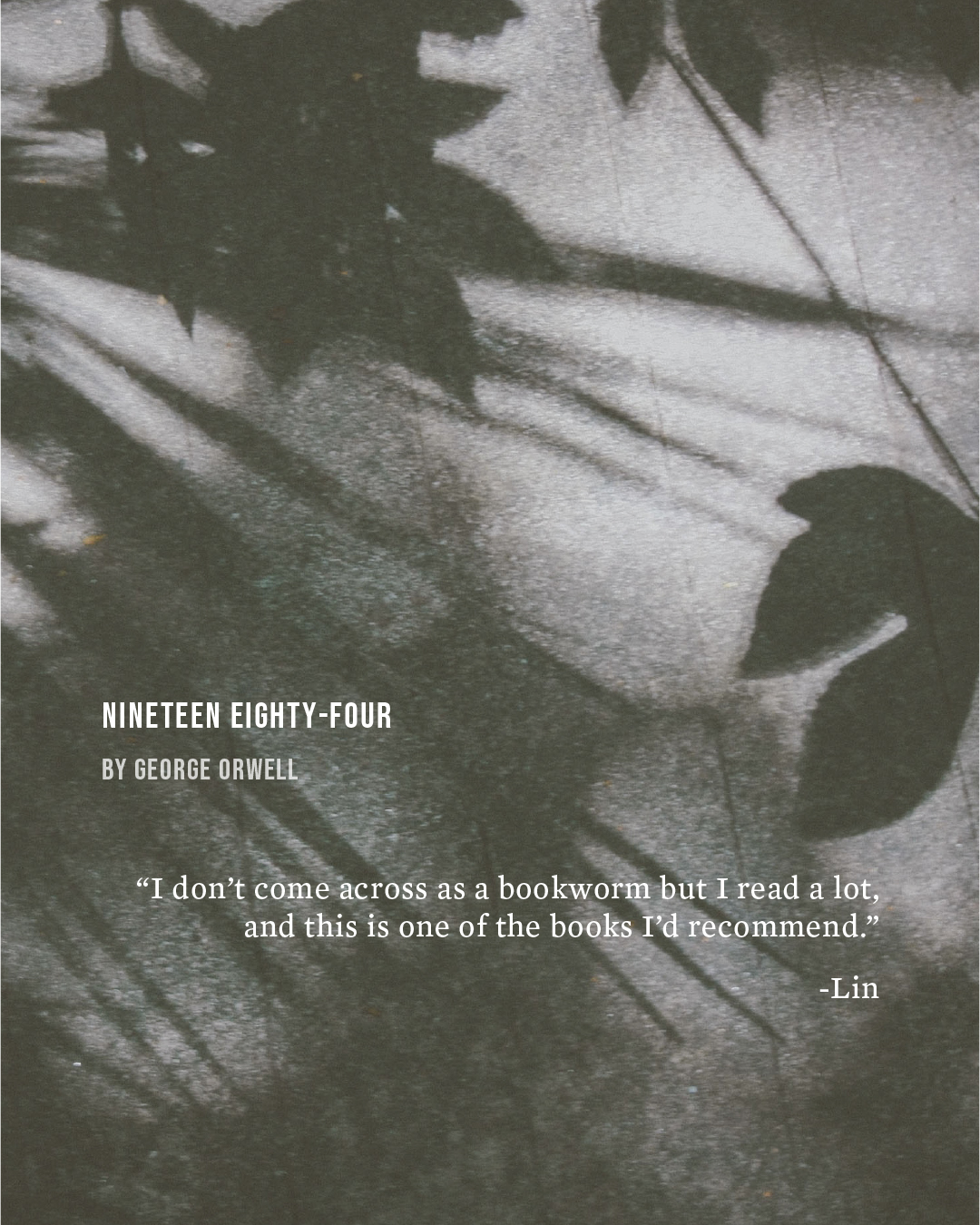 “We shall meet in the place where there is no darkness.”

Nineteen Eighty-Four was Orwell’s last and most prolific novel—a commentary on totalitarianism that has both enthralled and haunted readers since its first print over 70 years ago. Ideas of surveillance, propaganda, freedom, and love tell a science fiction story of the protagonist, Winston Smith, living in a dystopian society under an oppressive political faction. As he suffers under the regime for his dissident actions, he optimistically envisions a future of freedom from pervasive surveillance, “where there is no darkness.” The novel remains timeless today, with some unsettling parallels—how much of our freedom are we willing to sacrifice for security and stability? Who watches Big Brother, and is history only written by the victors? Do we mind that everything that is fed to us on our feeds has been carefully calculated, as long as it’s what we think we want to see? Although Nineteen Eighty-Four offered no release for Winston at the end of the book, it serves as a mirror, reminding us to never simply accept what we have become accustomed to. 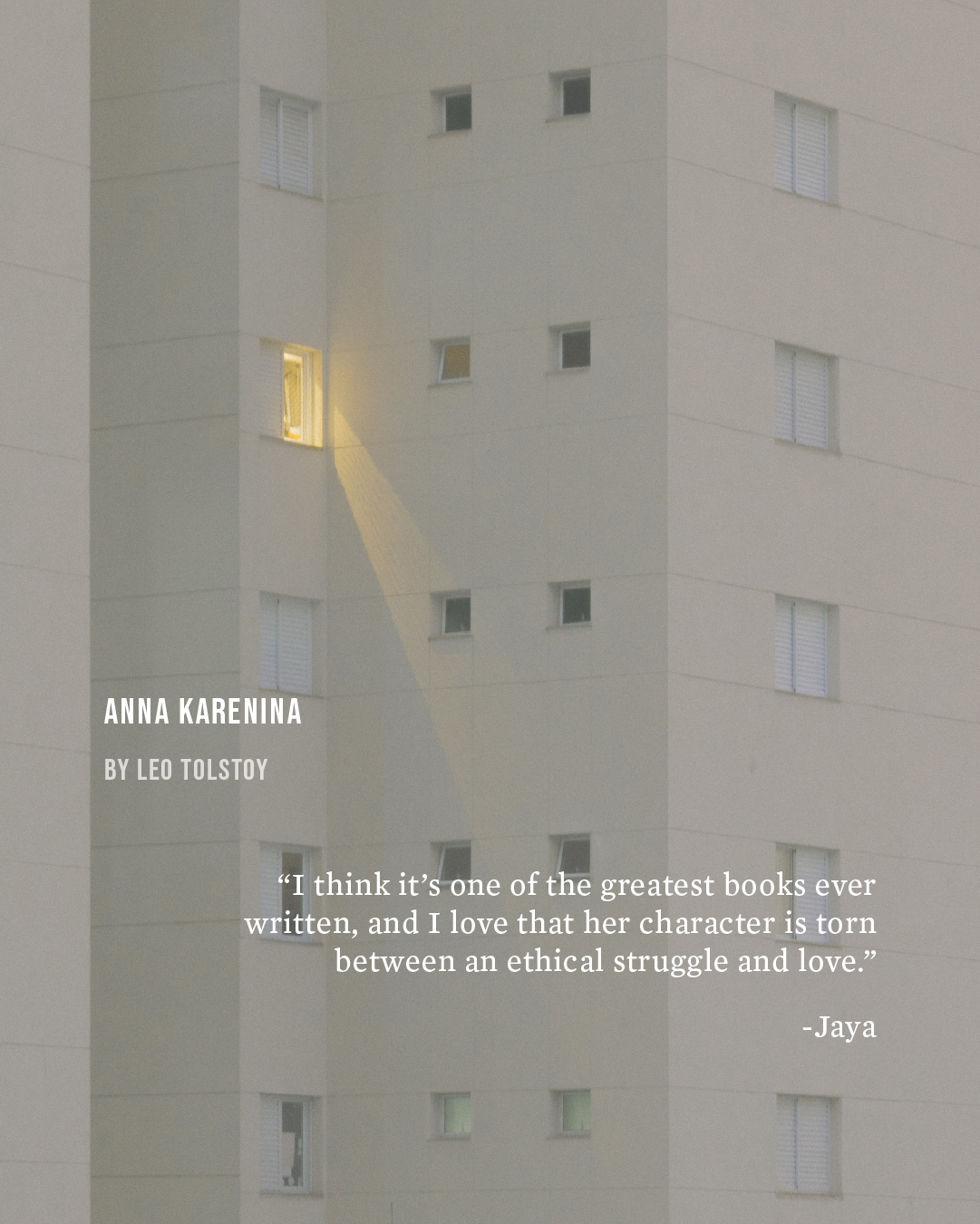 “All happy families are alike; each unhappy family is unhappy in its own way.”

“They haven’t an idea of what happiness is; they don’t know that without our love, for us there is neither happiness nor unhappiness–no life at all.”

Set in Imperial Russia, the Tolstoy classic centres around the adultery of Anna Karenina. Themes of family, faith, marriage, betrayal, and society throughout the novel capture the complexity of love and life. Tolstoy invites readers to simply spectate, leaving all judgement aside. The prevailing idea: the cost of forbidden love. As some believe, Tolstoy, himself, wasn’t sure about love and was caught between conflicting ideas, as depicted in his characters. While the dramas of the Russian elite in the novel are fictional, the underlying story of relationships is one many of us may identify with today.

The Diary of a Young Girl by Anne Frank 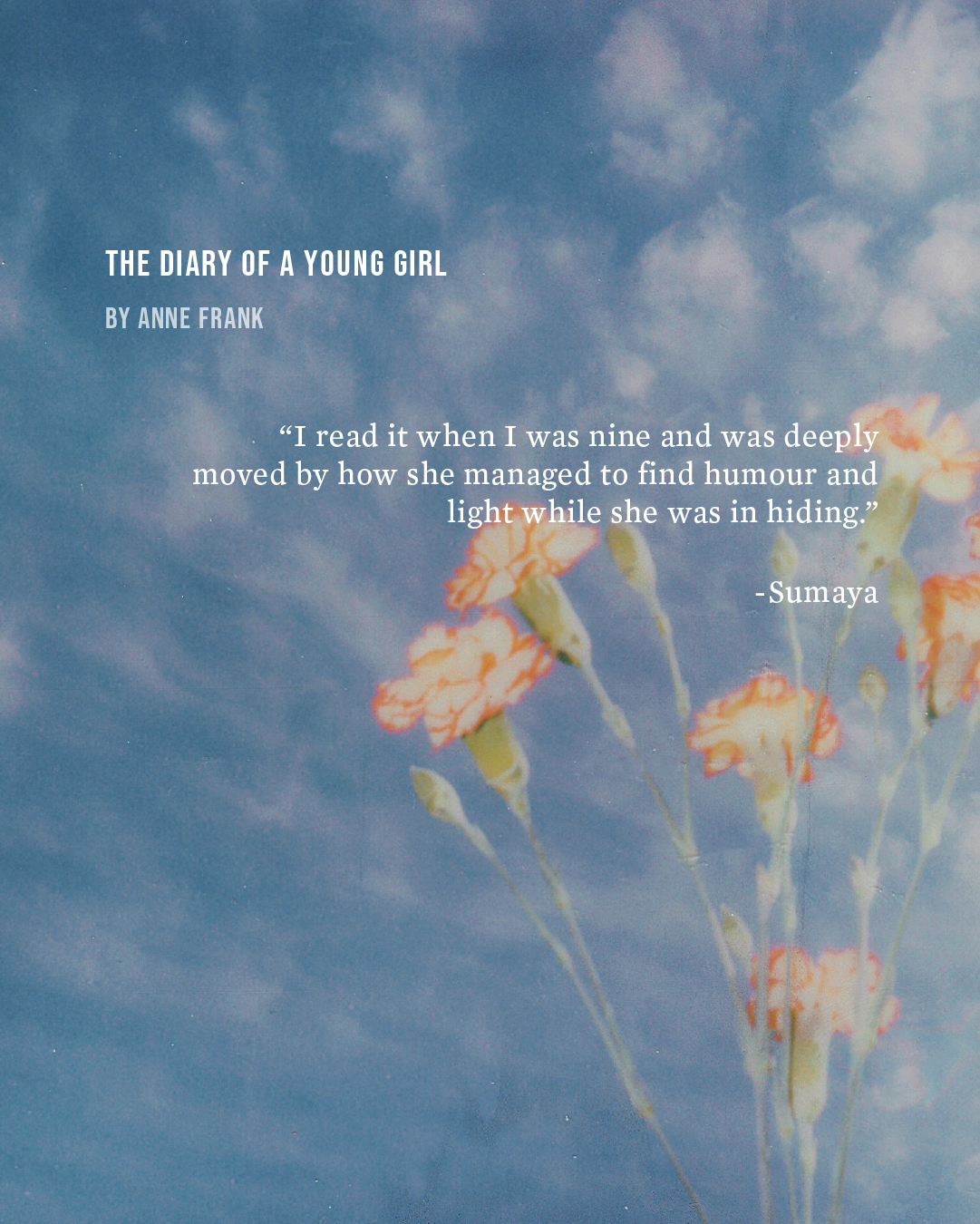 “I’ve found that there is always some beauty left—in nature, sunshine, freedom, in yourself; these can all help you.”

The fame of this book often misleads us, making us forget that Anne was a real girl, isolated and living in fear, only 13 years old when she started writing in her diary. Addressed to “Kitty” and others, she created an imaginary group of friends to write about her deepest thoughts and feelings. While few of us can claim to be living under the same persecution as Anne did, perhaps the pandemic has left us with a similar sense of isolation and anxiety. Like Anne, journalling can help us process our emotions, but unlike Anne, we are now also fortunate to have technology that allows us to connect with family and friends, outside of our four walls. This, however, brings about some questions about our own vulnerability—we might share so much of ourselves online, but how much is truly genuine? Do we mask our vulnerabilities offline as well, even with people we trust? One thing to learn from Anne, though, was that in spite of the unimaginable struggles of war, she remained positive, found humour, and sought beauty. May her spirit inspire us to find joy and confide in community during difficult times. 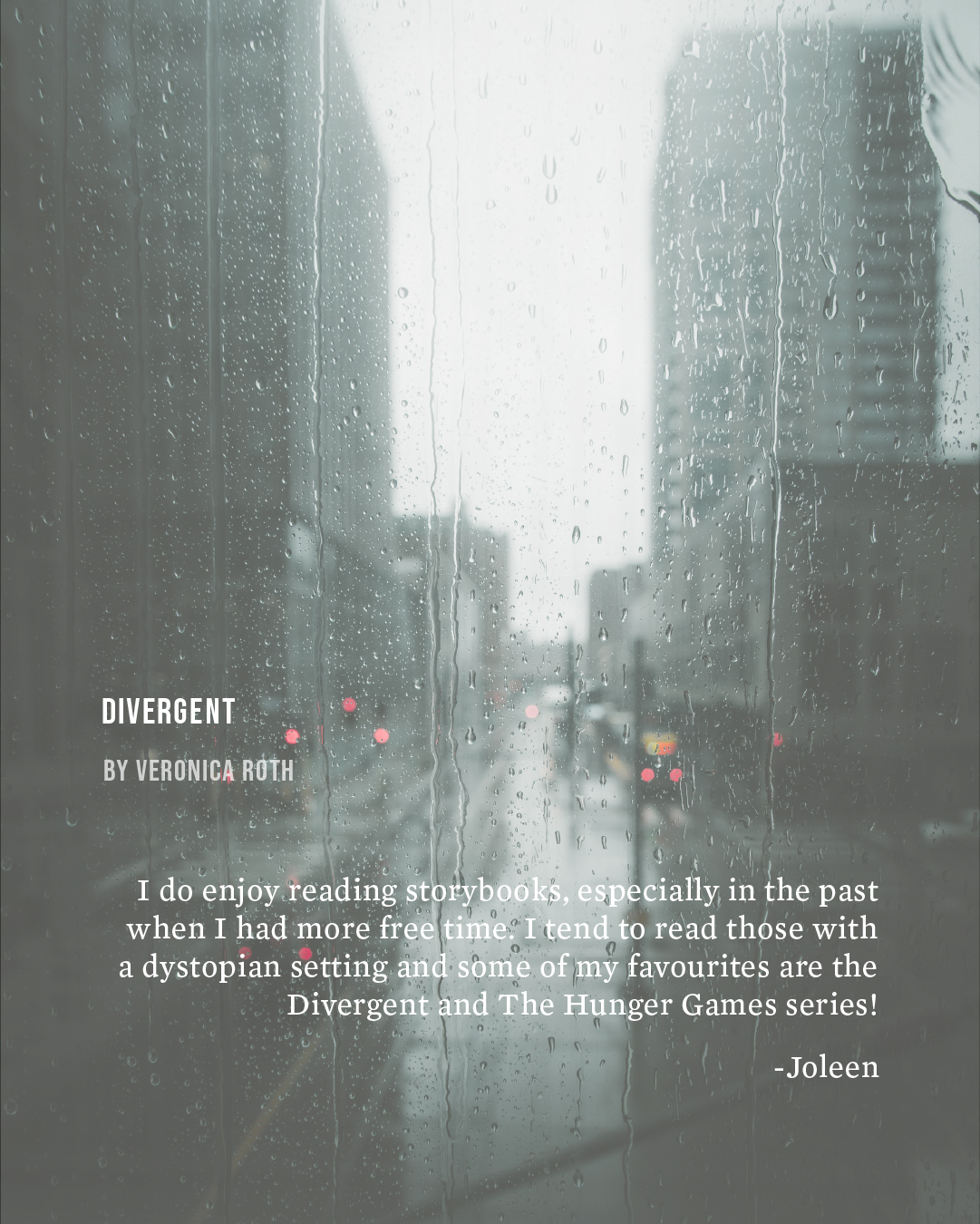 “We believe in ordinary acts of bravery, in the courage that drives one person to stand up for another.”

Divergent is the first of a trilogy of the same name, with the books adapted to movies as well. Set in a post-apocalyptic world, Divergent portrays a society that is split into five factions, each representing a virtue—honesty, unselfishness, bravery, peacekeeping, and intelligence. At the age of sixteen, all members are assigned their factions and called to bear their virtue for life, but the protagonist finds out she is divergent—someone who doesn’t fall neatly under any faction. Written to a young adult audience, the novel portrays the difficulties of being outside societal norms. We can see how Divergent might inspire youths around the world, and in Singapore as well, to challenge the way things have traditionally been done. Career paths, gender expression, and even how to dress are some areas people who don’t conform to the mainstream band together in support of each other. Hand-in-hand, within the larger society, there is hope that we’re working towards more understanding and acceptance of those who differ.

In The Skin Of A Jihadist by Anna Erelle 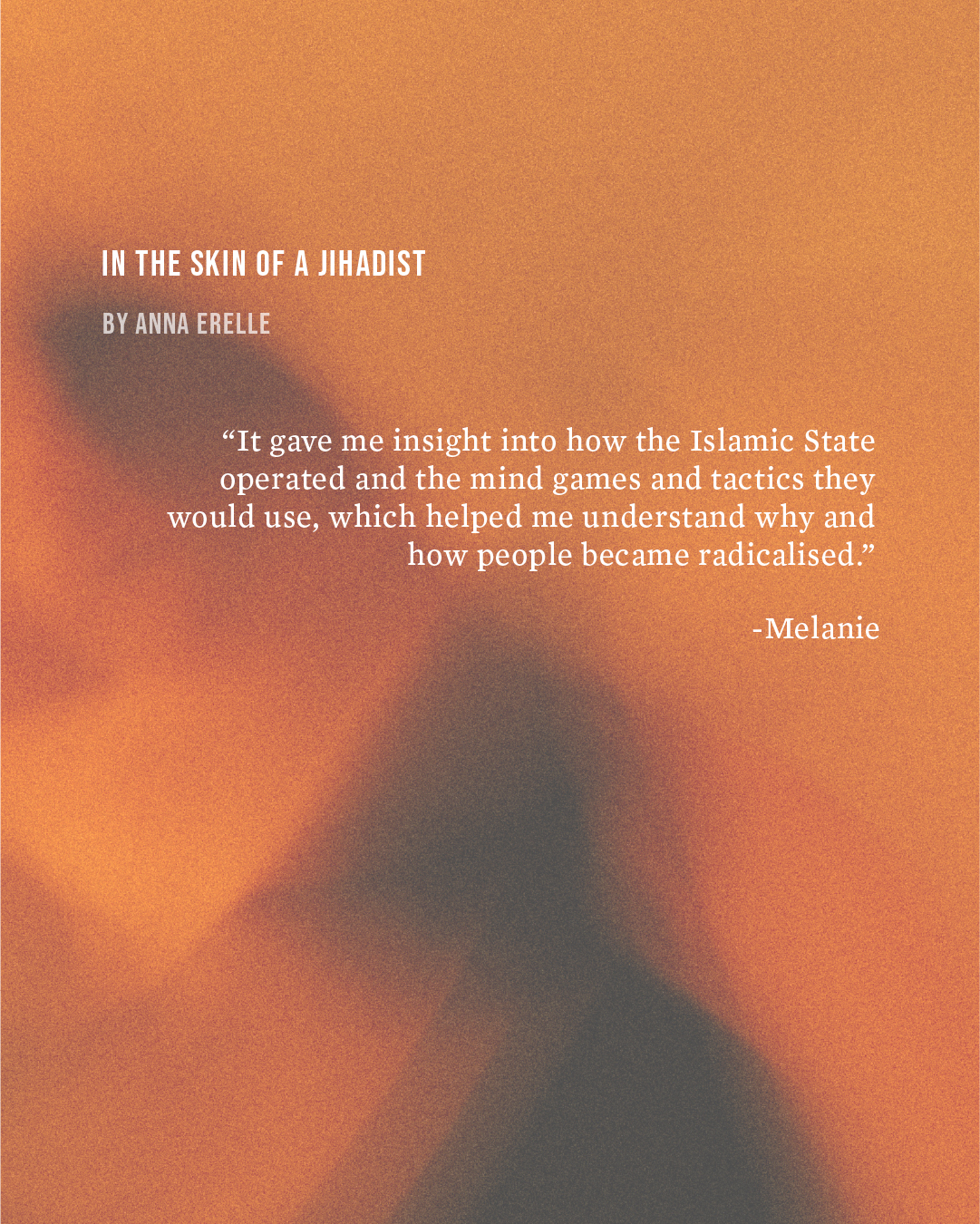 “It was surreal. There I was, at ten o’clock on a Friday night in spring, sitting on my sofa in my one-bedroom Parisian apartment, wondering how to continue my investigation on European teenagers tempted by Islamic extremism, when a French terrorist based in Syria all of a sudden started writing me. I was speechless. At that moment, the only thing of which I was certain was that I hadn’t imagined starting my weekend like this.”

Anna Erelle (pseudonym) is a French journalist who documents her recruitment by a jihadist to join ISIS in this book. Over Skype, she made initial contact with a high-ranking member of the group who starting expressing his love for her. The conversations eventually led her on a journey to meet him. Written in first-person, the book immerses you in her identities: a freelance writer in real life; a jihadi girlfriend in virtual life. Those worlds collide right in her living room—a harrowing reminder of how open our lives are in this technological age, and perhaps how susceptible we are to the things we read and watch online. The book is noticeably straightforward—producing an eye-opening account on the world of ISIS—but doesn’t delve deeper into Erelle’s motivation. Was it purely journalistic passion? Did she go deeper, out of personal curiosity? Was part of her actually convinced? Nonetheless, In The Skin Of A Jihadist shows the great lengths that people will go in search of truth, and reminds us that this story for Erelle is a reality for others who went all the way on this journey.

If you’d like more suggestions, take a look at the June 2021 edition of recommendations here.