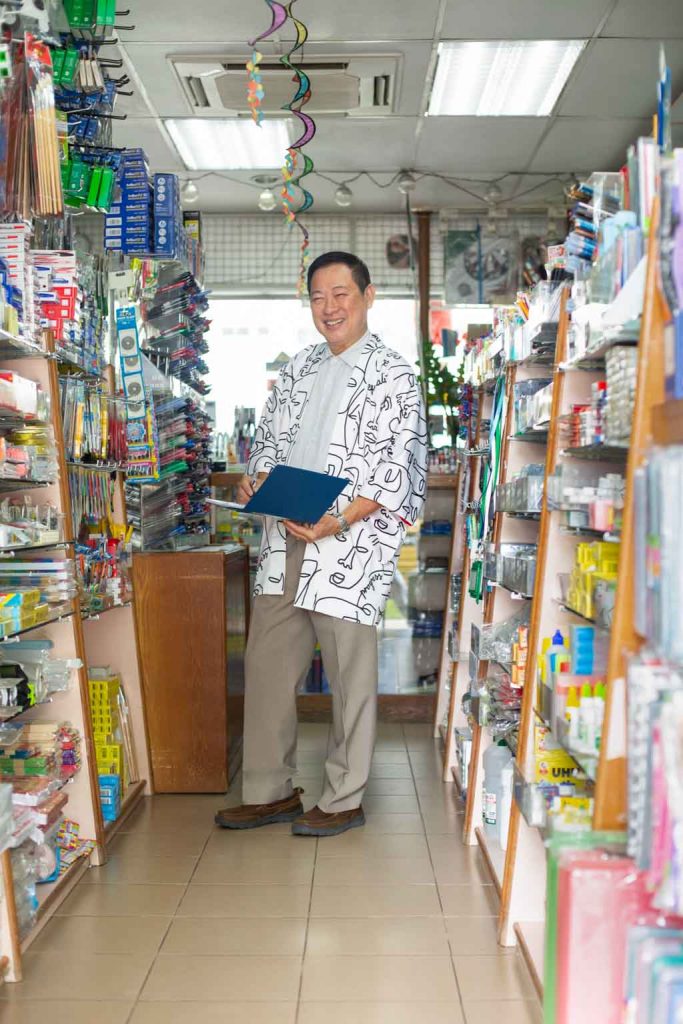 For the young and the young at heart, a trip to the stationery shop is always a memorable experience. With shelves crammed full of knick-knacks—some practical, some just for amusement—it’s a place where we indulge the inner child in all of us, or relive some of our fondest memories from school. Kim Eng Stationery Traders Company, founded by Mr Lim, has been the cornerstone of many such memories. For the past 40 years, Mr Lim has grown up alongside his customers, and while it hasn’t always been an easy journey, it’s been a fulfilling one. Although he might not have much, he’s content with how far he’s come, and Mr Lim’s story is just one of the many modest ones that tell the tale of Singapore’s progress: from a kampung with an independent spirit, to a bustling metropolis that never forgets where it came from.

What first prompted you to start a stationery shop?
I wasn’t originally in this line—I actually worked as a civil servant under the Public Utilities Board (PUB). We used to think that if you didn’t have a degree, then you’d always be a civil servant, and I’d only studied till Secondary 4. I wanted to find a way out, though it was going to be tough: even if I wanted to start my own business, I didn’t have the capital. I knew some suppliers in the stationery business, so I decided to try and rent out a place to open a stationery shop. I looked in many different areas, and eventually I ended up here, because there was no other stationery shop in the area back then.

You’ve been in this neighbourhood for a while—what do you like about the area?
I actually used to run an old stationary shop back in East Coast Road with a friend, but we had  differing opinions, so I decided to set up on my own business. That’s how I ended up here in Aljunied, and I’ve been here since 1977—for more than 40 years. I used to stay in Geylang Serai back when it was a kampung, so I’ve always liked living in the eastern area of Singapore. Both my primary and secondary schools were in the vicinity. If you ask me to go to Jurong, I wouldn’t like it (laughs). So I’m lucky to get a shop closer to the east, where I’m familiar with the area. 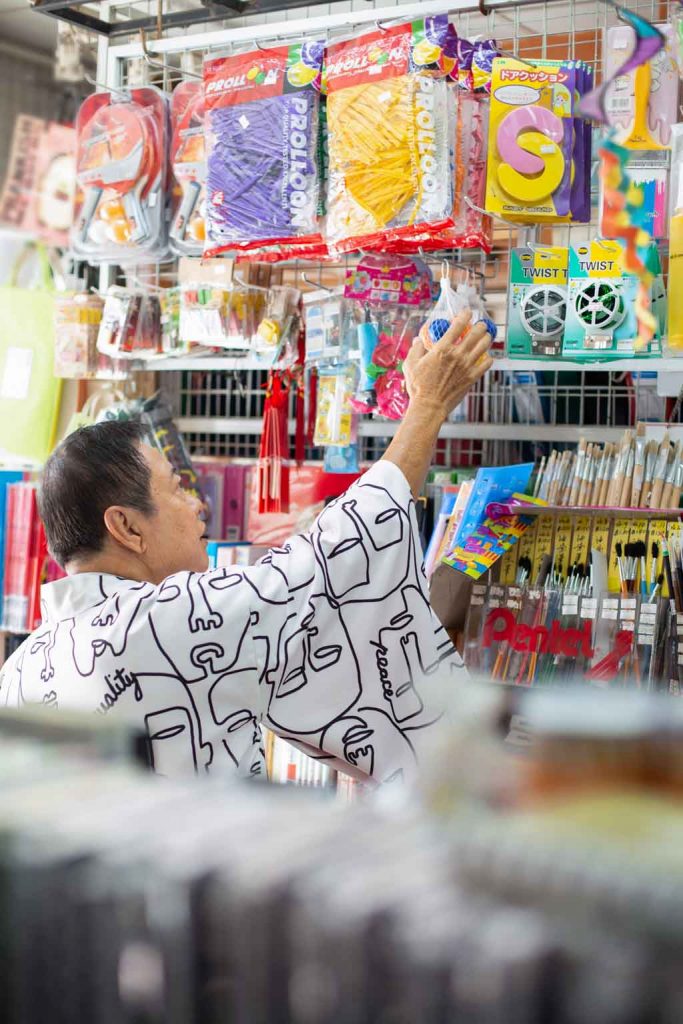 Have you faced any tough times with the shop? How did you overcome them?
It was definitely tough! We had to do everything ourselves—there was no one to help us then, even with deliveries. For the first five years, my wife and I opened the shop every day—there was no such thing as a holiday! I didn’t study business, so I learnt everything through experience. There’s such a big variety of products in our shop, and we have to keep track of everything, down to one pen! We learnt a lot of it through experience—it’s about spending time in the shop, familiarising yourself with the products, and understanding which products people want to buy.

Do you plan to retire soon? And if so, where do you hope to see the shop in the future?
What good does retirement do? If your brain has nothing to think about and you don’t have anything to do, it’s very hard to live. At the shop, I have things to do and people to talk to, so it’s healthier. I’m not sure what I’d do with the shop—I have two daughters, but they’re doing well in their own lines of work. I don’t have plans yet, but as long as there are people to help me run the business, and I can come by and oversee it, that’s good enough for me. 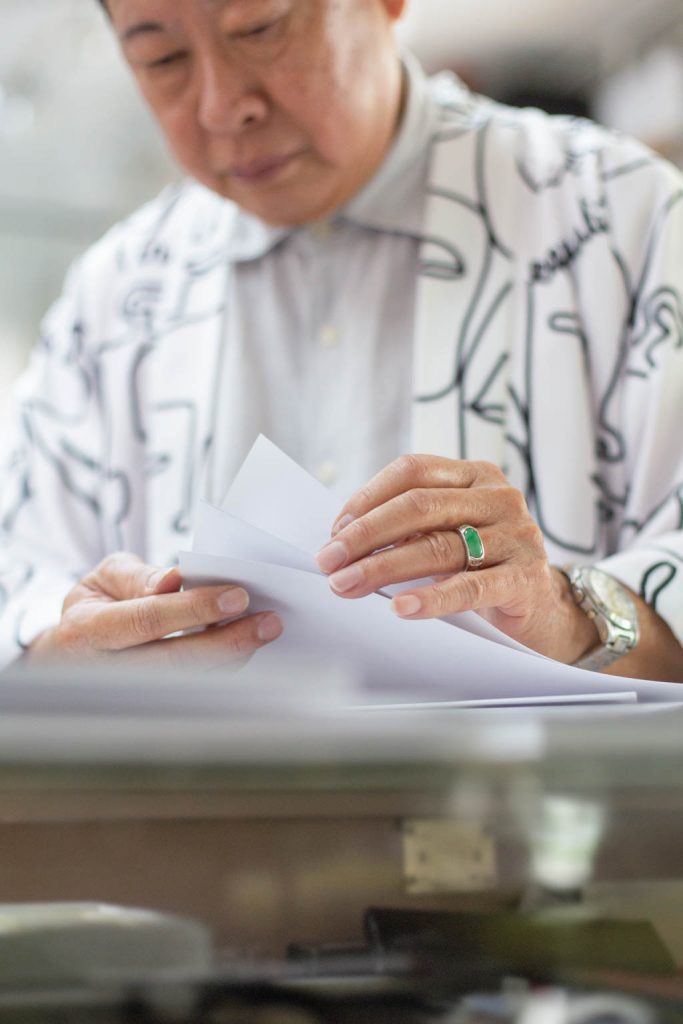 In the age where everything is shifting online, it might be hard to make business as a stationery shop—how have you adapted your business over the years?
Computers have replaced a lot of things—you can edit things on the computer and print it out, you don’t need a rubber to erase things anymore. I’ve adapted the business by providing more services—for example, I can help customers make their own self-inking stamps. I’ve also learnt how to use a computer, just enough so that I can help customers print things. When my customers request certain services—like printing, laminating—I have to modernise and adapt so that the business can survive.

Share with us any interesting customers or encounters you’ve had.
I’ve been doing business with some of the salesmen for many years, so we go out for a kopi when they come by. Sometimes customers just come by to talk, and leave without buying anything (laughs). I’ve seen my customers grow up over the years. There are customers who used to be students and are all grown up now; although they’ve moved out of the area, their parents still live here, so when they visit they’d come by the shop and chat, and now they buy things for their own kids. When they see me they’d say, “Wow, you’re still here, even after so long?” And I say yes, I don’t have anywhere else to go (laughs). Some of the older customers tell us, “I’m not used to going to other shops. Here, if I didn’t bring enough money, I can still bring the product home and come back to pay for it later. The other shops aren’t willing to do that!” 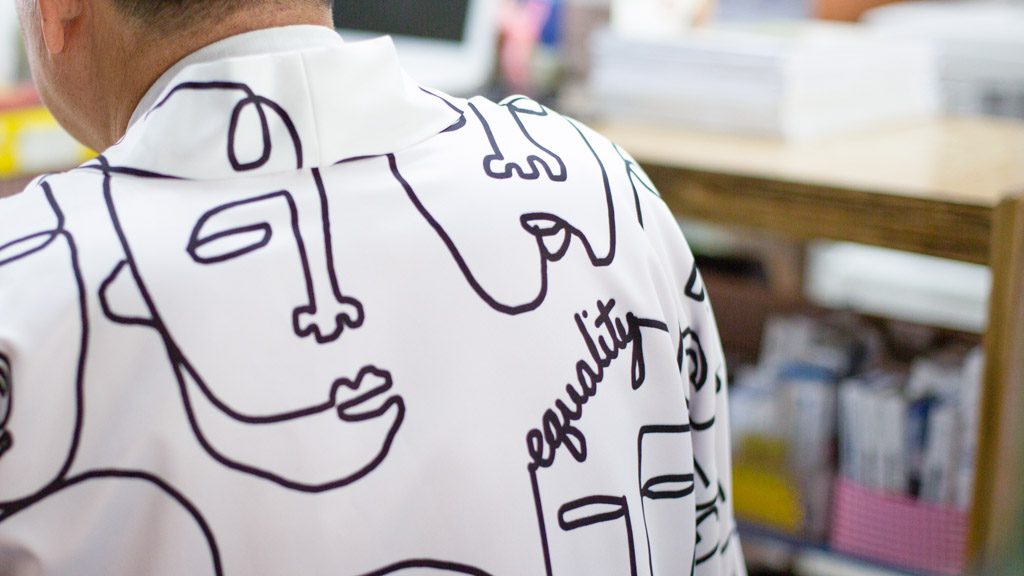 Since you’ve been running a business successfully for so many years, what’s one advice you’d give younger people who are just starting out?
I think they need to understand that running a stationery shop has its limits. It’s hard to make a lot of money; there are costs involved, so you have to save up. If you sell the items at a cheaper price, you don’t make a lot of profit; if your items are too expensive, the customers won’t buy from you. It’s not an easy line of work. You can sell what you want, and do what you want, but if you want to make a lot of money and lead a comfortable life, that’s difficult.

As someone who has seen Singapore from pre-independence to now, what do you think has been the biggest change/transformation the country has gone through?
In the early days, I used to stay in a Malay kampung in Geylang Serai, with a longkang (drain) in front. There was a red dirt road in front of the longkang. and whenever a car drove past, I’d be covered in red dirt from head to toe. My white school uniform would be all red. Now there aren’t any red dirt roads, and the kampung has become a highway. That’s the biggest difference—there aren’t any villages anymore.

I think for the sake of progress, the change was necessary. I don’t really have any yearnings for the past. Life was harder back then, and you earned very little, though the cost of living was lower. The changes are good, but the cost of living might be too high. For lower income families, it’s very tough, especially if the cost of medicine and healthcare is expensive. I have diabetes and high blood pressure, and the costs are quite high—but I’m lucky, because I’m considered as part of the Pioneer generation and receive subsidies. 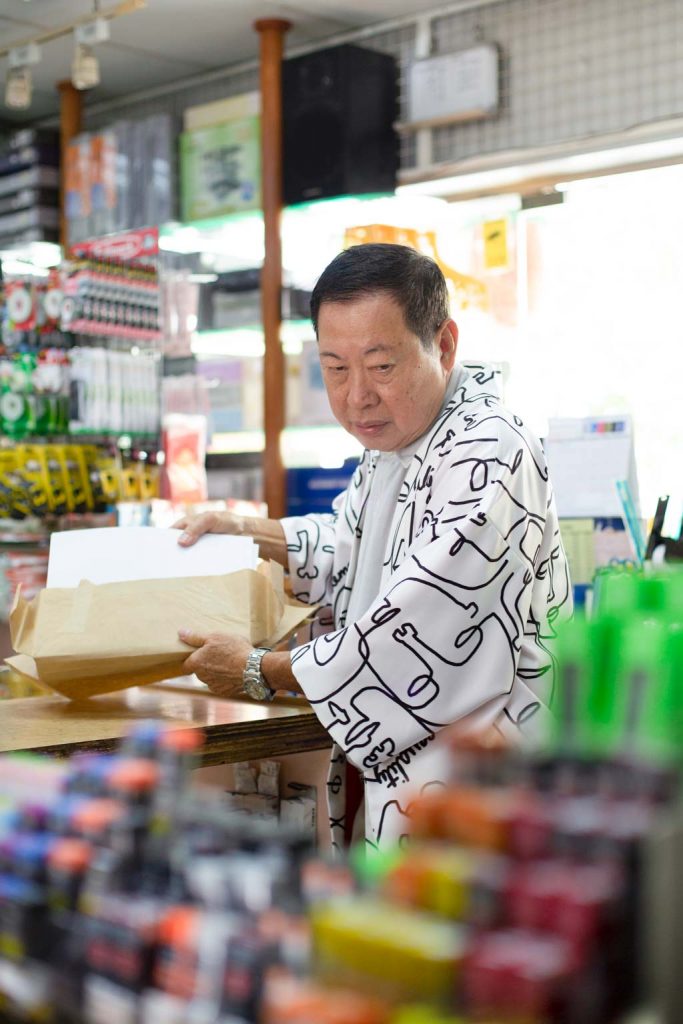 To you, personally, what does it mean to be Singaporean?
It’s great to be a Singaporean because it’s very easy to travel to other countries with our passport (laughs). Singapore is also very safe, and the education system is also very good—you don’t need to go overseas to study.

You were 20 years old when Singapore gained independence. What were your thoughts and feelings from the time?
The country was going through a lot of changes at the time. There was definitely a sense of happiness; we went from British rule to being independent, so you felt like you were your own ruler, instead of having the British as rulers. I wasn’t worried—Singapore is a small country, and as long as you govern it well and don’t antagonise your neighbours, there shouldn’t be any problems. 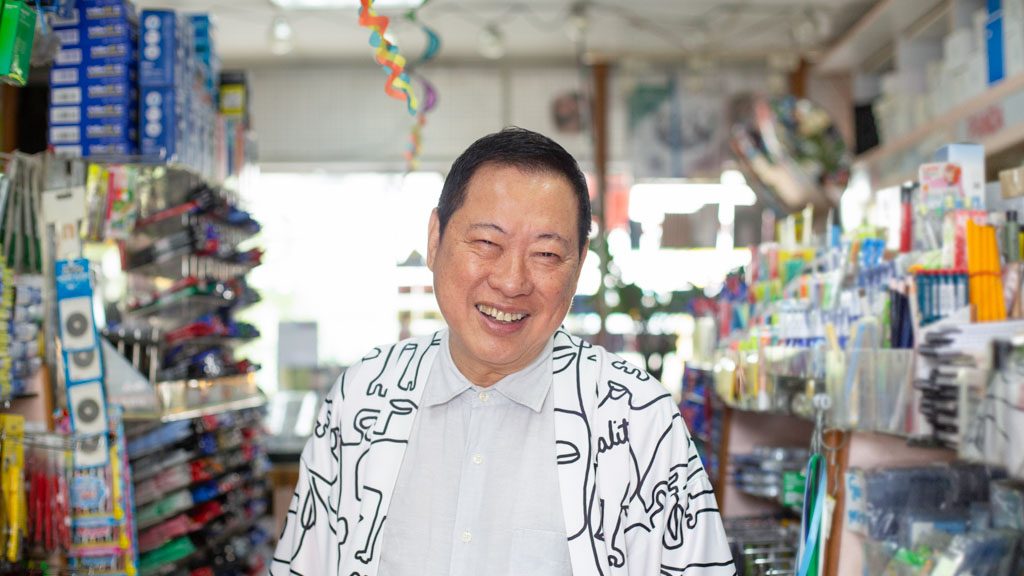 What’s a Singaporean value that you feel you can identify with, and why?
I would say I’m hard working, and I have perseverance. In this line of business, the profit margin and value of goods are very small. You need to take time to invest in the business. We didn’t have much money, or much stock. Whatever profit we earned, we used to buy more stock. The business slowly grew from there. You have to be diligent and keep at it, and that’s the only way I could get to where I am today.

I’m quite frugal too—the clothes I buy are always 3 for $10 (laughs). I don’t smoke, drink, or gamble, I don’t own other properties, so I’m quite prudent and I don’t take risks.  I didn’t set my sights very high, didn’t expect to be a millionaire, and I think Singapore, too, grew in a very prudent way. It didn’t expect to progress overnight.

Mr Lim wears a summer jacket designed by David’s Daughter. Stand a chance to win this jacket for yourself—find out more about the #My1959 collaborations and giveaways at www.sg/1959. Contest ends 31st December 2019.