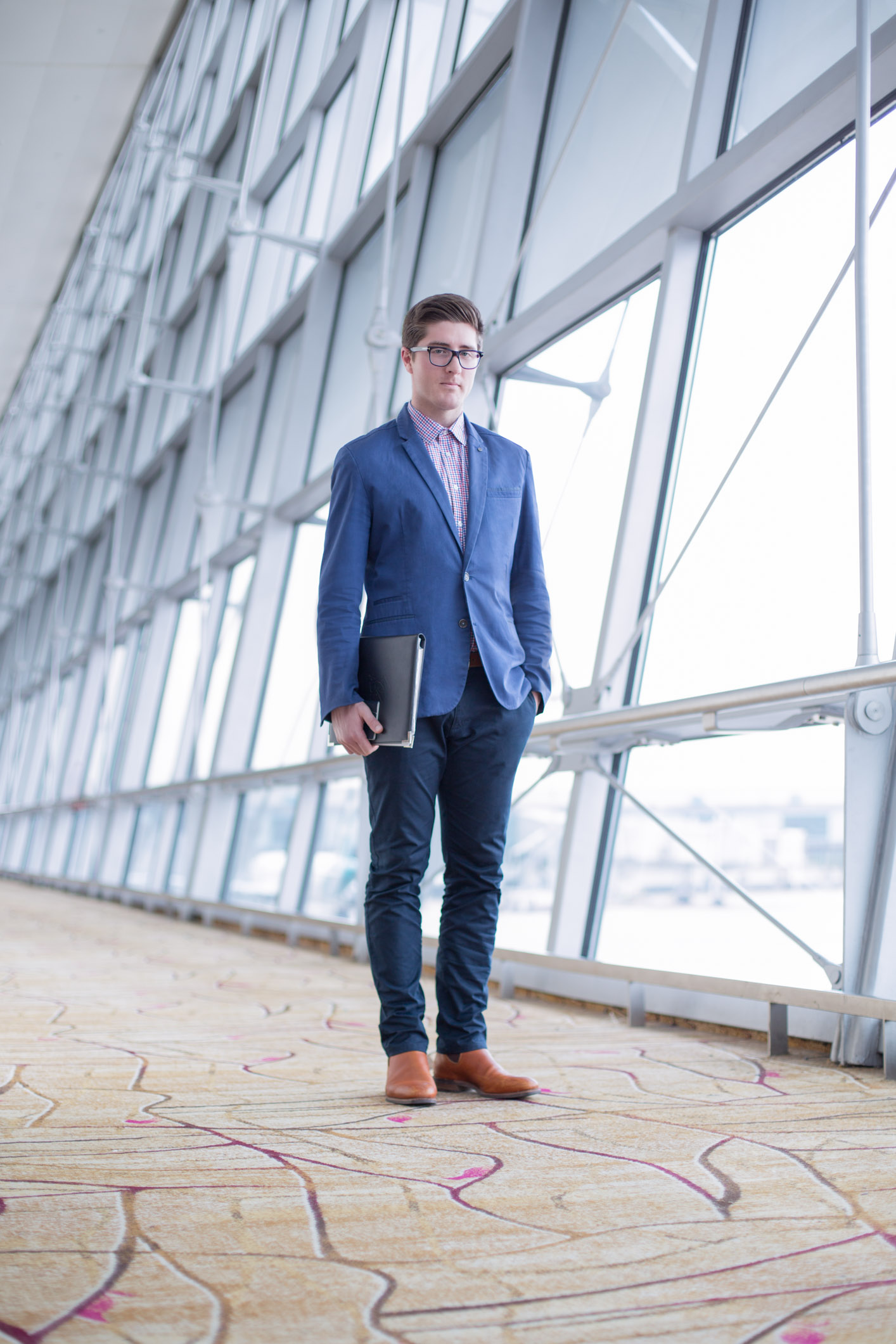 Brad, works in Marketing, from Australia, in the T2 Transit Hall.
Jacket from SABA, shoes from R.M. Williams, glasses from Tom Ford.

Tips to look fashionable while travelling?
Go with your instinct. 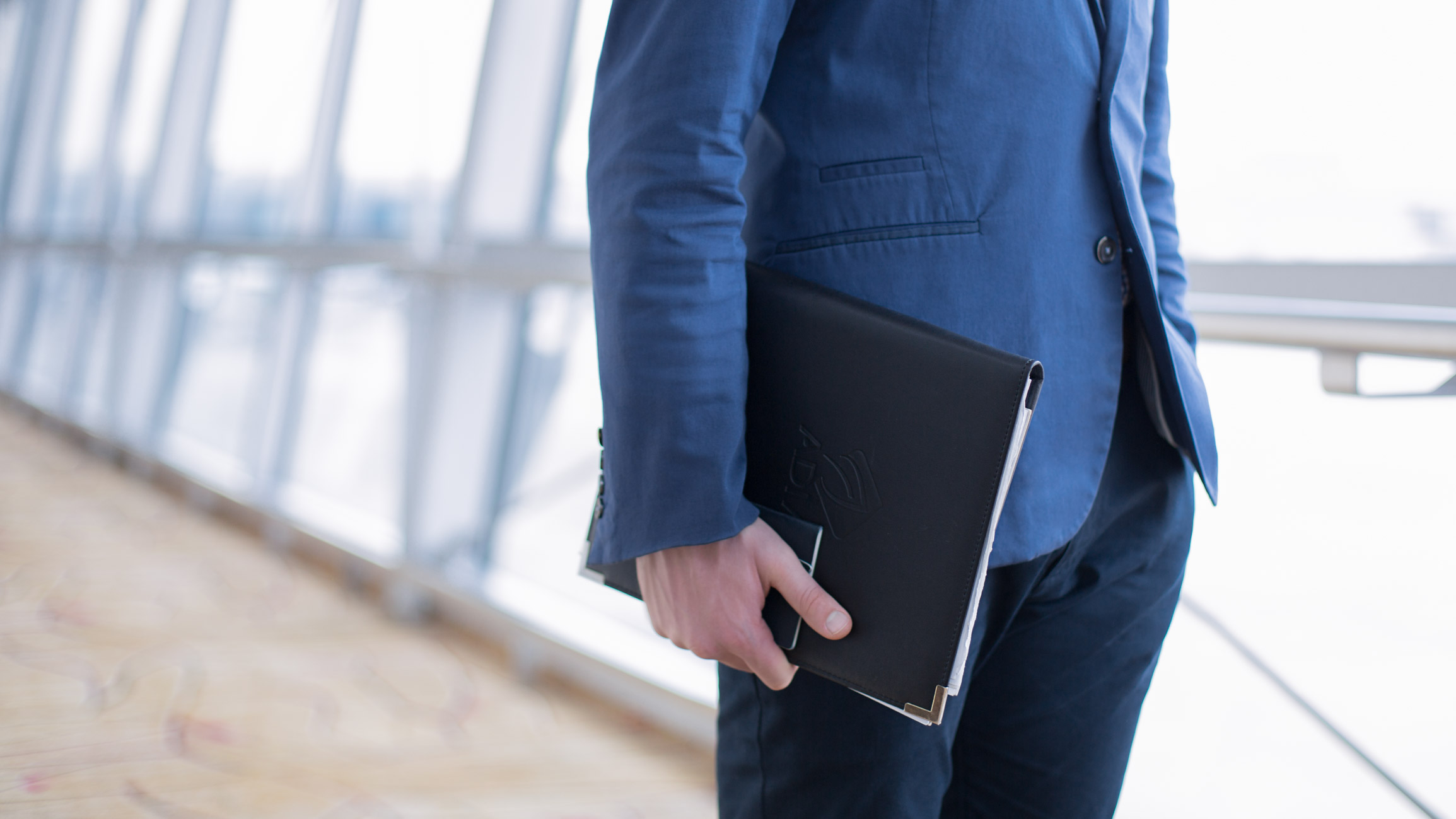 At first glance Brad appears to be your typical jet-setting professional, but in fact, he’s closer to the wide-eyed, excited travellers we see coming through the gates. The Aussie used to work in the States, and this is the first time he’s travelled out of the country since he returned back home. “I travel every three to four months, but most of it is domestic, in Australia,” he says. “On this trip, however, I’ve been in Singapore for the past 24 hours for work, and now I’m off to Penang and Berlin for more meetings. I hope to expand my horizons.” 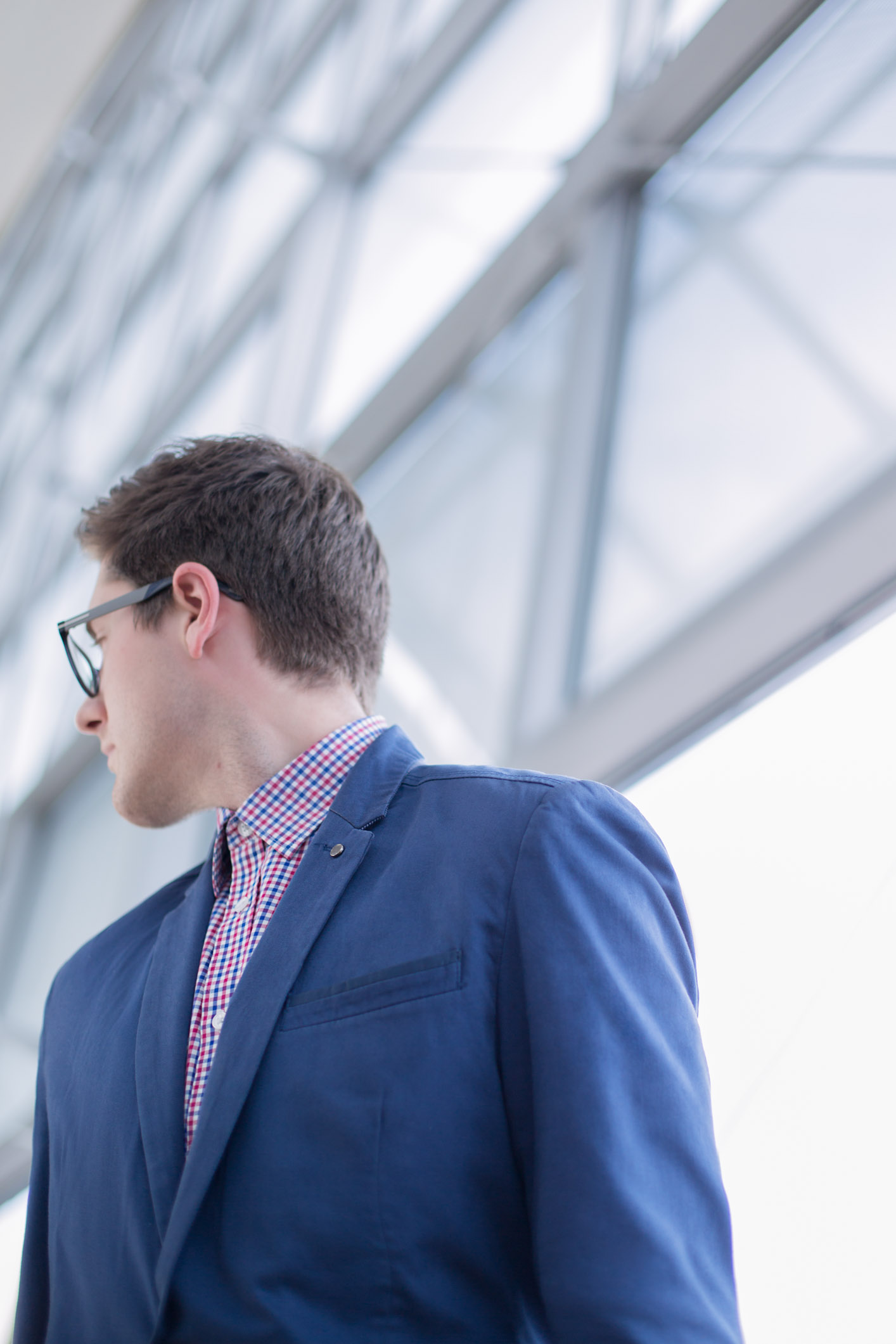 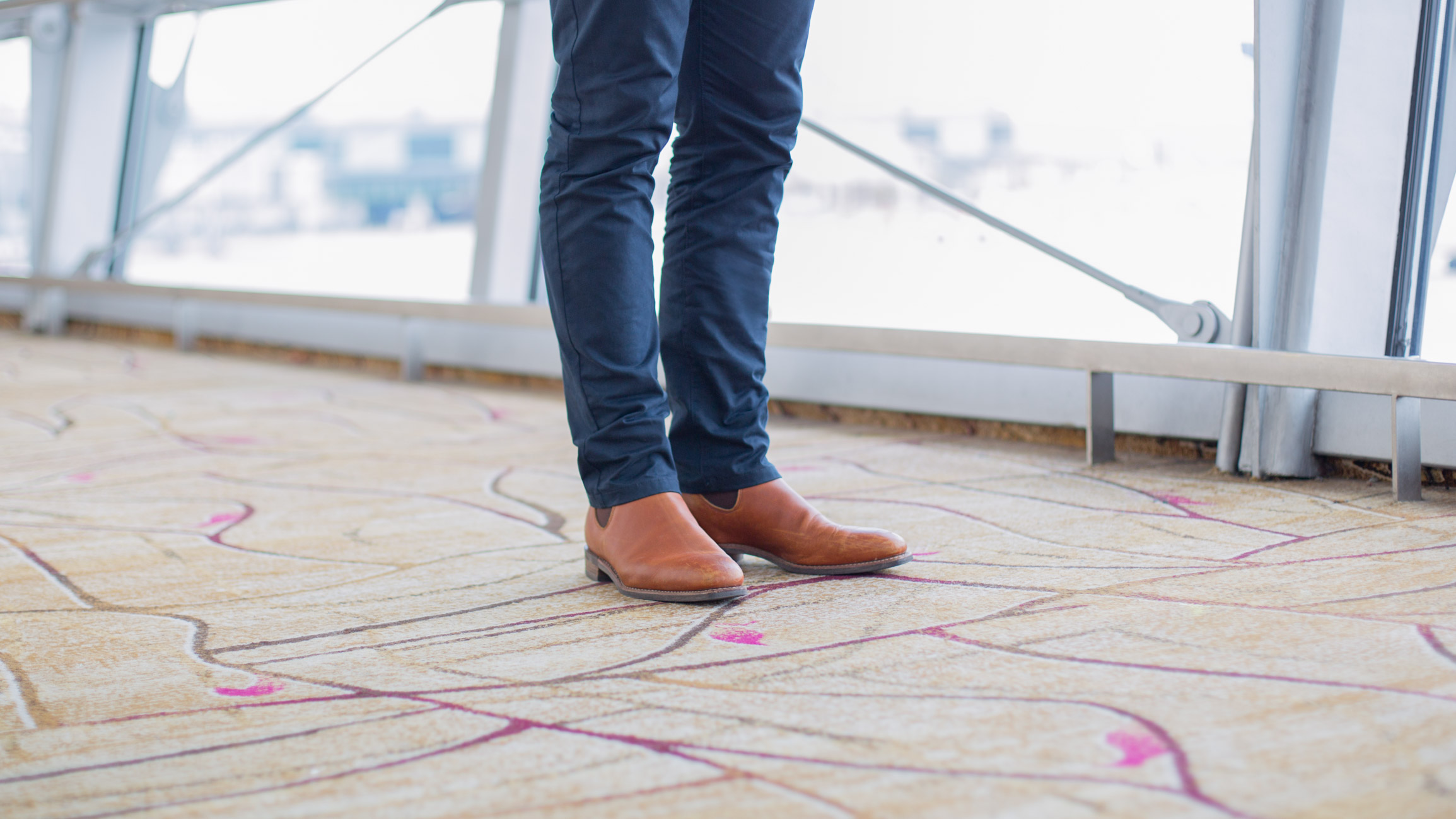 It seems that he’s doing just that, saying that Changi Airport makes him feel like a “small fish in a big ocean”. “The airport back home is definitely smaller, with less space to walk around and with less shops, but Changi Airport is big and extravagant. My favourite places are the duty-free shops, for the clothes and cologne, and the bar, where I’m usually on my phone sending out emails. I’m actually heading there right now—as long as I’ve got a cold beer, I’m happy!” 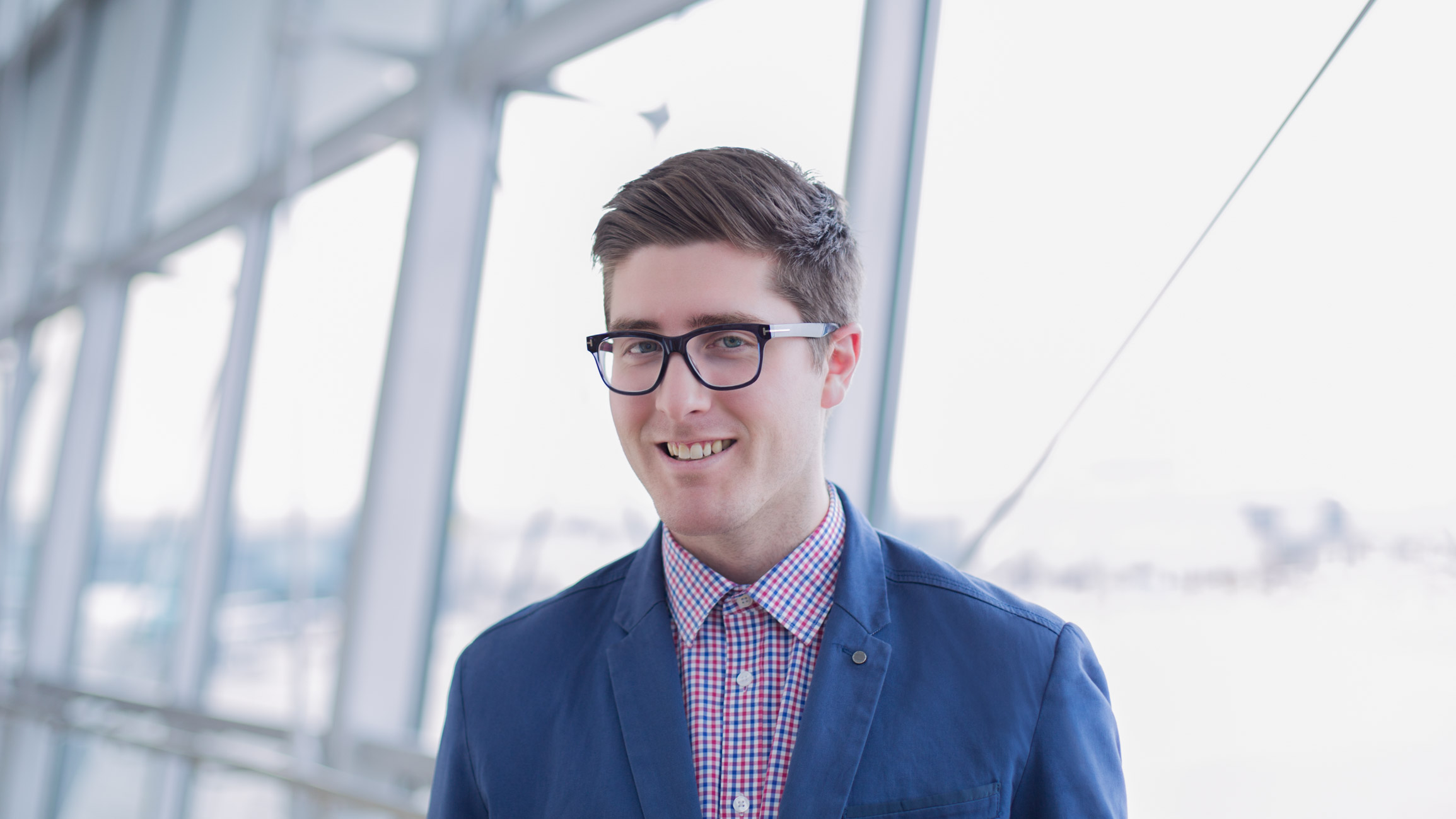 Brad has a bunch of places that are up next on his wanderlust list: “The Philippines and Taipei, because I’ve been invited by people to both of those places, and Sumba in Indonesia because it’s a good place to get away,” he says. “My sister lives in Bali, so I would also like to go there. I love the warm weather and the beaches; it’s too cold in Adelaide, where I’m from!” However, Brad’s most memorable trip was to Germany, with some friends. “It was amazing being in another country, with such a different culture,” he says. “I learnt enough German to order my food, but being in a country that I didn’t speak the language of was refreshingly challenging.”