From the artist to the many hands that carry an artwork to its rightful spot in the gallery, various people have a role to play in the long journey that an artwork takes. One such person who’s integral in this process is Anisah, who’s part of the production management team at Singapore Art Museum (SAM) that has brought many exhibits to life—some that you might have definitely seen in the galleries at SAM. As a closet on/off artist, her journey with art began long before she stepped into her current role.

It’s safe to say Anisah’s an old soul at heart, from her choice of artwork that brought back fond memories of her own grandparents, and her penchant for keeping items with a story to tell. In the feature below, find out more about how Jing Quek’s artwork, exhibited in SAM’s Learning Gallery, that featured our pioneer generation inspired Anisah in more ways than one, as she shares more insights about the fair share of adventures she’s had at SAM.

Find your fashion inspiration from SAM’s exhibition and stand a chance to be rewarded with $500!  From now till 30th November, visit the ongoing Time Passes exhibition and create a picture of an outfit inspired by any of the artworks on display. Read till the end to find out how to participate in this contest! 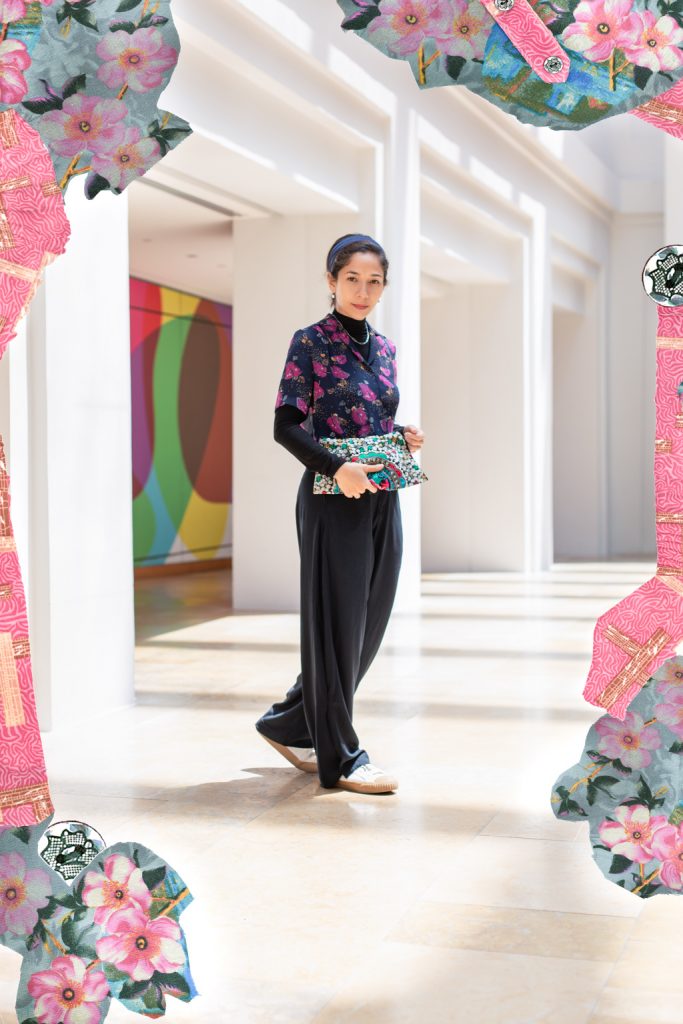 Shentonista (S): Share with us more about your role at Singapore Art Museum.
Anisah (A): I’m a senior manager in SAM’s production management team. The work we do entails planning and executing the exhibitions, from planning the timeline & budget, to managing contractual negotiations, handling logistics and much more.  We work with all the various SAM teams to realise an exhibition, and in turn, the artists to realise their artworks.

S: You chose Singapore Idols—Aunties and Uncles by Jing Quek as your artwork—what was it about this piece that stood out to you?
A: Jing Quek’s work puts certain overlooked individuals in the limelight. I’m also fond of old folks, and hence a fan of some of the SAM programmes catered to seniors. Looking across the series, I wonder what’s going through the minds of all these people as they were posing for Jing Quek—did they understand what was going on? Did it even matter? Did they stress about what to wear? As I was unpacking these thoughts, I realised I was in a similar position when curating my outfit based off this piece. 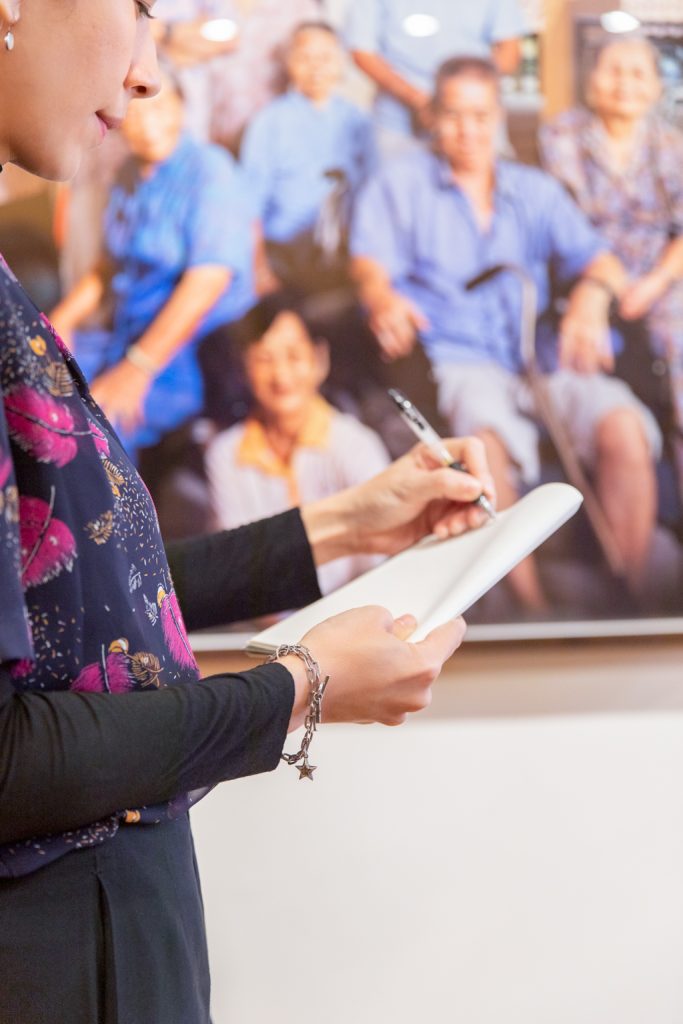 S: Tell us more about how this artwork inspired your outfit choice.
A: I like second-hand clothes, and I’m not too concerned about whether they’re actually vintage. Ever since I was a kid, I’d wear my parents’ clothes, just because I thought some of their clothes were cool—even my dad’s shoes. I’m not a flamboyant dresser, but I do have an affinity for buying second-hand printed blouses. I have a collection of self-declared ‘aunty’ tops—and the one I’m wearing for the feature is one of them.

S: There are some habits that people claim to be ‘aunty’—would you say you have any habits considered as these?
A: I don’t like to throw things away—does that constitute as an aunty habit? I used to live with my grandmother, who liked to throw away things, contrary to my own habit, and I’d bring these treasures back in the house to hide them from her.

S: Do you have a fond memory about your grandparents, or a phrase that they often say that has stuck with you?
A: I’ve been blessed to have seen all my grandparents, so I have many fond memories. Even if I didn’t have them in my life for long, I love how the memories they leave influence a family’s vocabulary/culture. My late grandfather had once said to me: “If it’s not okay, it’s not the end of the day. And at the end of the day, it’ll be okay.”

My 90-year old grandma used to always say “kita bikin dia, bukan dia bikin kita,” which is just a sassy way to say that we’re the boss of whatever we do and that we’re in charge. She’s still around and her dementia has got her repeating the phrase “wa barik wa salim” which refers to “blessings and peace”, and I feel that’s a lovely thing to be able to repeat. 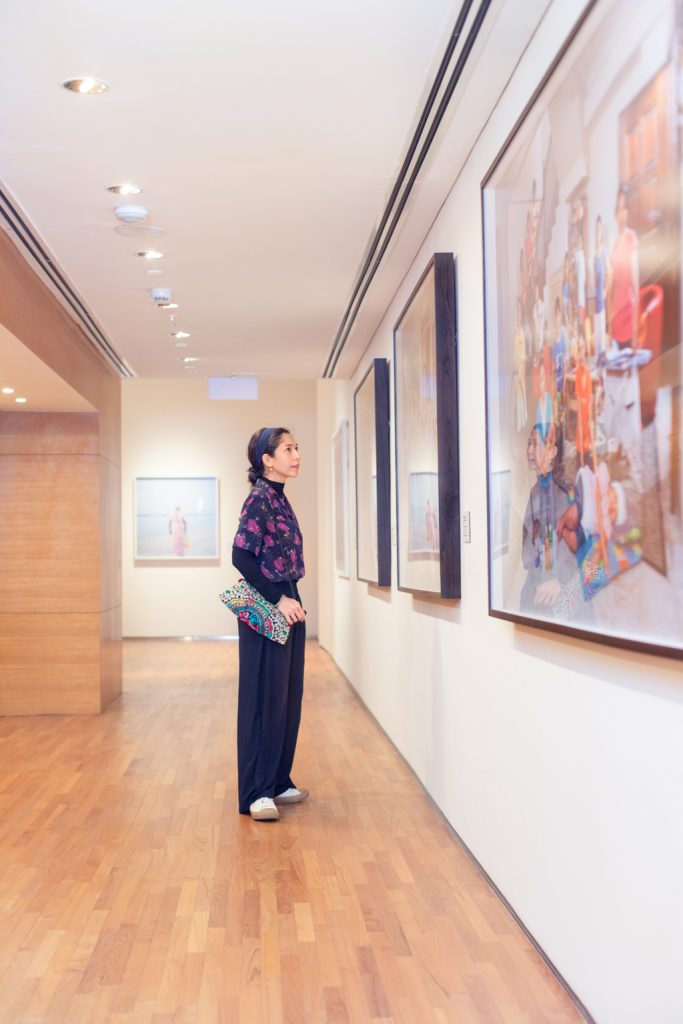 S: How do you think you’d be like as an ‘aunty’ in 30 years’ time?
A: I suppose pretty much the same as I am now, but hopefully I’ll be one of those fit and healthy aunties who practise tai chi or zumba every day (laughs).

S: Jing Quek’s artwork highlights seemingly unimportant individuals and their large contribution to society—what’s an occupation that you feel does not receive enough public attention?
A: Naturally, given the last few months, many of these under-appreciated occupations have received a lot of attention, especially when the ‘essential versus non-essential’ debate came up. A silver lining to the pandemic would be that there’s a newfound appreciation for these people who contribute to society. Yet despite this, there’s still a whole bunch of unseen workers like those people who work in Land Transport Authority control rooms monitoring the roads, or people at the port, or crane operators, and so many more.

S: Have you always wanted to work in a museum? If you had the chance to change occupations, what would be an ideal job?
A: I used to work in film & TV for many years. Some of that work crossed into producing content for museums and exhibitions. From there, I suppose the thought of working in a museum had subtly planted its seed. As for changing occupations, I’ve always enjoyed researching old footage—so maybe I’d consider being a film archivist. 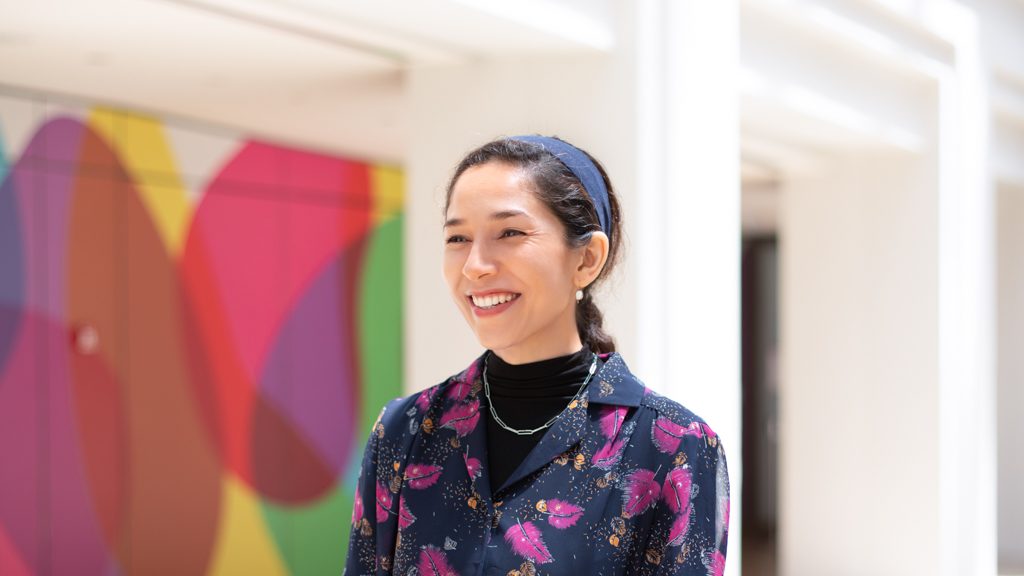 S: What has been the most memorable exhibition you’ve handled? Tell us more about it.
A: There’re just too many! The Biennales are always memorable because of their sheer scale. One of the perks of working in a contemporary art museum is that you deal with all kinds of artworks. Once in a while, you get an artwork which is super labour-intensive in nature. We usually reach out to volunteers for help, but when even that’s not enough, other colleagues come in to help, so it’s all hands on deck.

Medium At Large that ran from 2014 to 2015 was memorable, as it was the first exhibition I worked on at SAM—it was a big permanent collection show with over 30 artworks. One of the works presented was Cloud of Unknowing by Ho Tzu Nyen and it was such a major technical feat—but somehow, a lasting memory I have is having to fill these huge bean bags with styrofoam beads on the day of the opening—so many colleagues helped out. The combination of static and styrofoam beads was not fun! I can laugh about it now though.

S: If you had to pick the most challenging part about your role, what would it be and why?
A: Dealing with things out of your control. Keeping calm under pressure. “Getting” the artwork is important for me and I need to understand why I’m doing what I’m doing.

Be fashionably inspired by the artworks that are part of the ongoing Time Passes exhibition and stand a chance to be rewarded with $500—to participate in our open call for Novel Ways of Dressing, simply follow the steps below:

1/ Visit the Time Passes exhibition either digitally (at the link here) or in-person, from now till 30th November
2/ Find your fashion inspiration from any work on display and dress up
3/ Snap a photo of yourself in your curated outfit next to the artwork that inspired it, and tell us why you were inspired by it. If you’re visiting the exhibition virtually, simply tell us in your post which artwork you’re referencing.
4/ Share it on either Facebook or Instagram (or on Stories!) and remember to tag Singapore Art Museum (@singaporeartmuseum), Shentonista (@shentonista) and add the hashtag #NovelWaysOfDressing to your post!

This is a content partnership between Shentonista and the Singapore Art Museum. Throughout this month, we’ll continue to share more stories from the individuals that make up Singapore Art Museum how they were inspired from the works on display at SAM’s Learning Gallery, so keep a lookout.