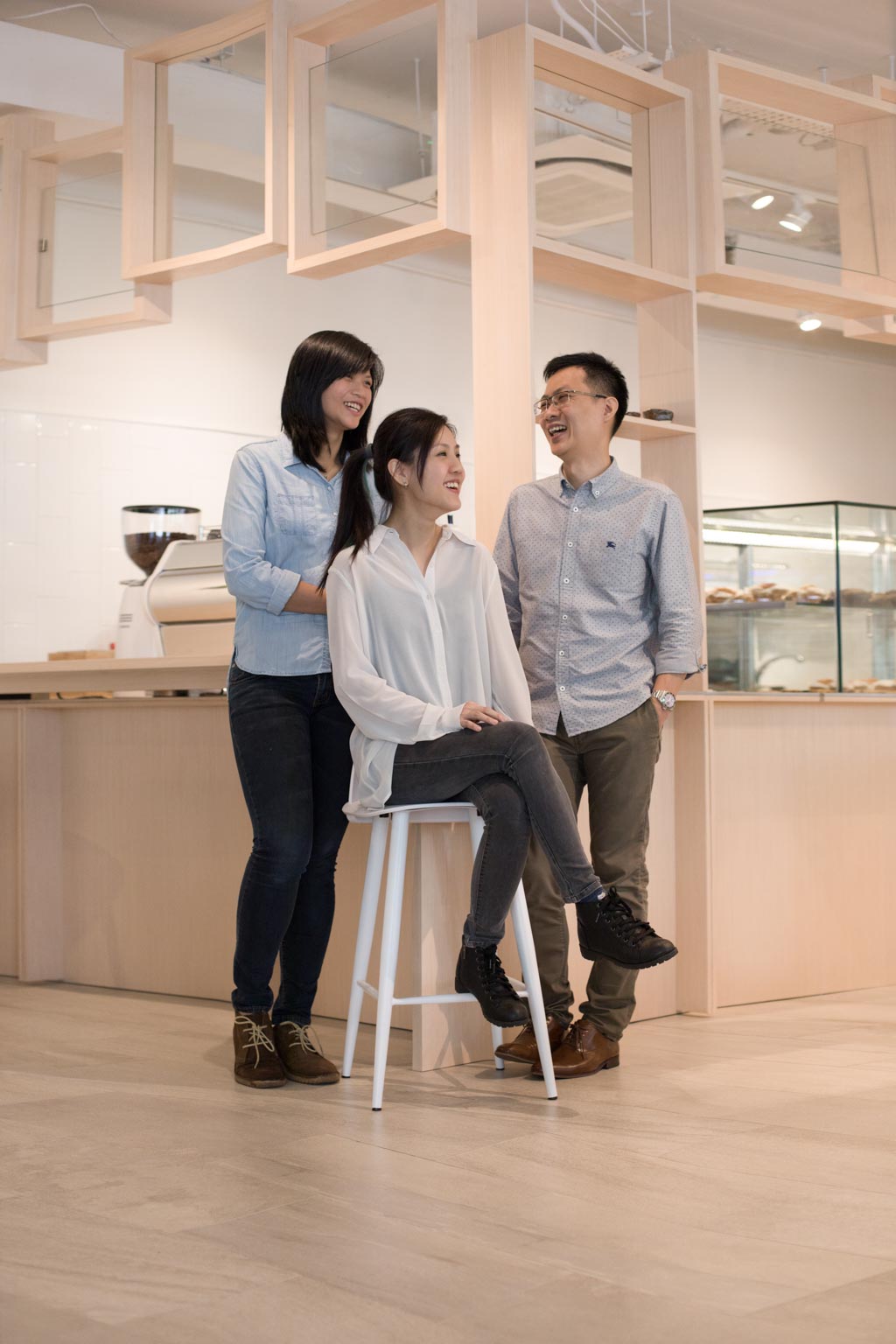 For Juliana, Samantha, and Jacob from Tiong Hoe Specialty Coffee, working with the Seeds café was a direct way of doing something meaningful that could possibly change the lives of the children they helped to train. But that was also where the challenge lay: having to teach special needs children the skills that would take them beyond the school gates, and also to maintain a respectable standard for the coffee that they serve. Despite the ups and downs, the team has more than managed to pull through, and we can tell that they’re quietly proud of the work that the students have achieved. We speak to them to find out more.

Can you tell us a little about Tiong Hoe Specialty Coffee and what you do?

Jacob (J): We started back in 2014 as a specialty coffee company. Tiong Hoe is actually my father’s name. It’s like a legacy that’s been passed down as he’s really passionate about coffee. When Rainbow Centre approached us for this project, we said yes because as the business moved along, we felt that we needed to give something back to society.

How did you guys find out about the project and what encouraged you to be a part of it?

Juliana (Ju): Malcolm, who works at Seeds, comes by to the Tiong Hoe café a lot. He shared about the project and I thought, “Why not?” It’s something meaningful to us.

Samantha (S): It’s been a very interesting experience. We had to come up with the training materials and structure for training the students with the mangers and job coaches. Because we weren’t familiar with the needs of the students, training-wise, the planning involved a lot of to-and-fro, where certain processes could not be put in place or had to be created for the students in order to match their needs.

Ja: We sometimes had to implement something, and gauge the effectiveness in helping students’ learning, then tweak the training from there. There were definitely some hiccups but with more communication and assistance from the team, we managed to push through. 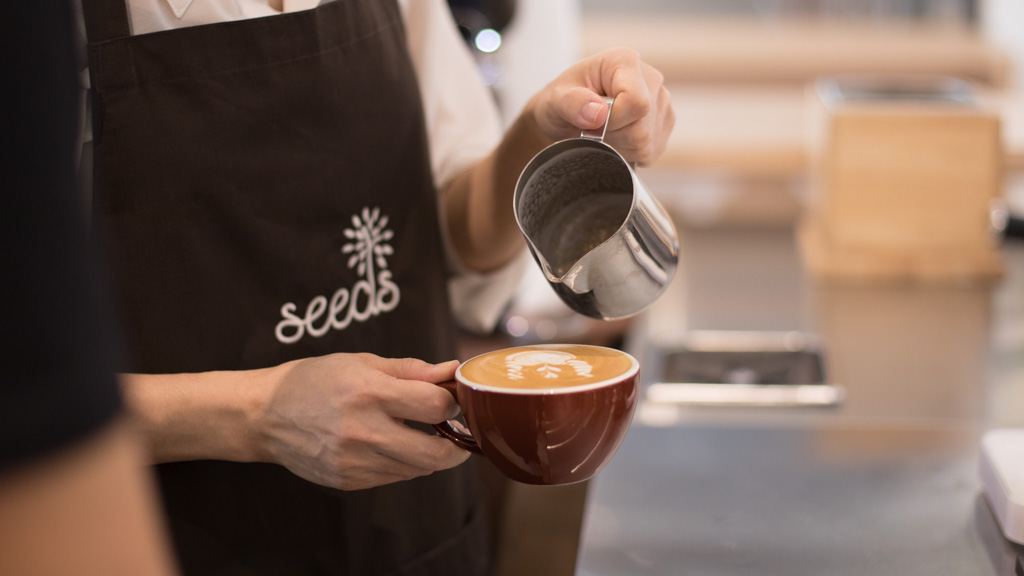 What were your roles in the project?

Ja: I was initially very involved in laying the foundations for the project. The training was done by Juliana and Samantha.

Ju: Jacob helped out with coming up with the different roasts for the café because they initially wanted to do the same roast degree as us, which is a Gachala brand. When that coffee isn’t calibrated properly, it can taste a bit more acidic, so we came together and developed a roast profile that’s slightly more forgiving. Jacob is our roaster and Samantha is also involved in the roasting.

Can you explain a little more on why the roast profile is more “forgiving”?

Ju: Coffee has to be extracted within a certain timing. At Seeds they serve a standard double shot and it usually takes 26 to 30 seconds to extract, but if they get really busy or due to other unforeseen circumstances, this coffee allows for a longer time for extraction.

Could you share a bit more about the coffee at Seeds?

Ja: This coffee is a blend between Columbia and Guatemala, and the Gachala beans are named after a region in Columbia, a place that supplies one of the best emeralds in the world. That signifies the kind of quality we want out of the coffee. It’s actually one of the bestsellers and it’s a crowd pleaser; we’ve received quite a few compliments. We decided to sell it here as it’s safe and appeals to most coffee drinkers. The notes of this coffee are rather chocolatey, with caramel too. The degree to which we roast it reduces the amount of acidity in the coffee. It has a good aftertaste.

What kind of training have you provided the Seeds team with?

Ju: It was actually quite challenging as they all didn’t have a background in coffee. We had to start from scratch. For Amutha, from the Special Projects Team, we ran through everything from general knowledge of the coffee and how it is before it’s roasted, all the way to making a good cup of coffee and pulling an expresso shot, making sure the froth is right. It was more challenging with the students as it was the first time we were in contact with special needs children. We asked around for advice from friends who worked in special needs schools to help train them better. The training started all the way back in August last year.

Ja: It’s things like how they behave, and what to look out for. We trained not only Amutha, but also the job coaches and the students. We were quite involved in all levels of training. 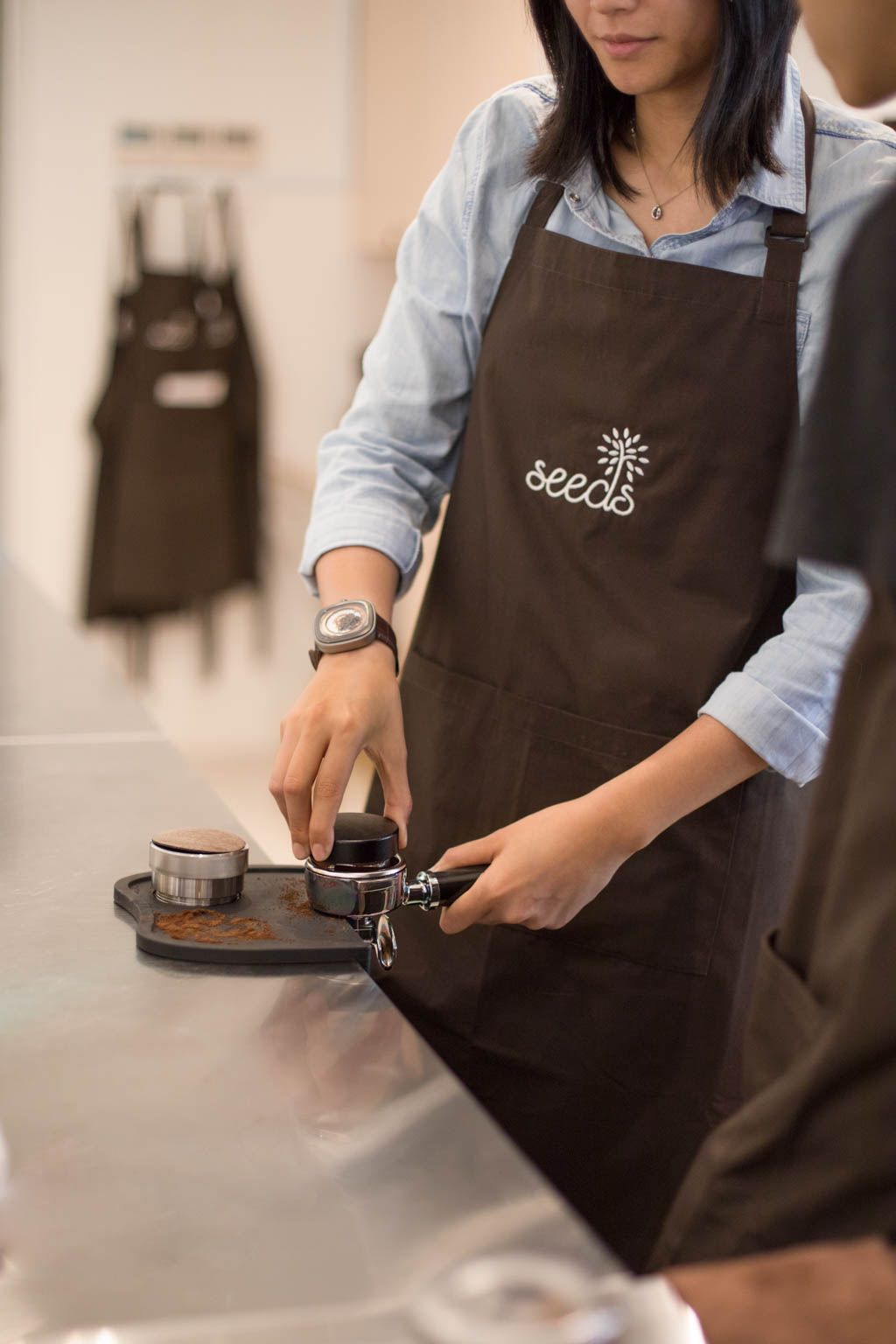 Can you share some memorable moments during the training?

Ja: This project is very different as it’s not like other start-ups where the stakeholders work for profit. Everything needed to be very structural and we needed to document every single thing. It’s not so much about the profit, but it’s more of a community project. It took up a lot of time but, seeing the final set up, we feel like the effort has paid off. The challenges were that it was time consuming, and that we had to train people who had zero knowledge about coffee. If we were setting up a café for a commercial customer, they’d probably employ staff with relevant experience, but for Seeds, it was zero.

Ju: A special moment for me was when the students served up their first cup of coffee. When they smile, knowing they can make a cup of coffee that they can serve to their teacher, that moment is the most special. Every student here is attached to a job coach who’s in charge of a child. During this period, their job coaches are there to make sure they behave and ensure they understand what we’re trying to teach them. 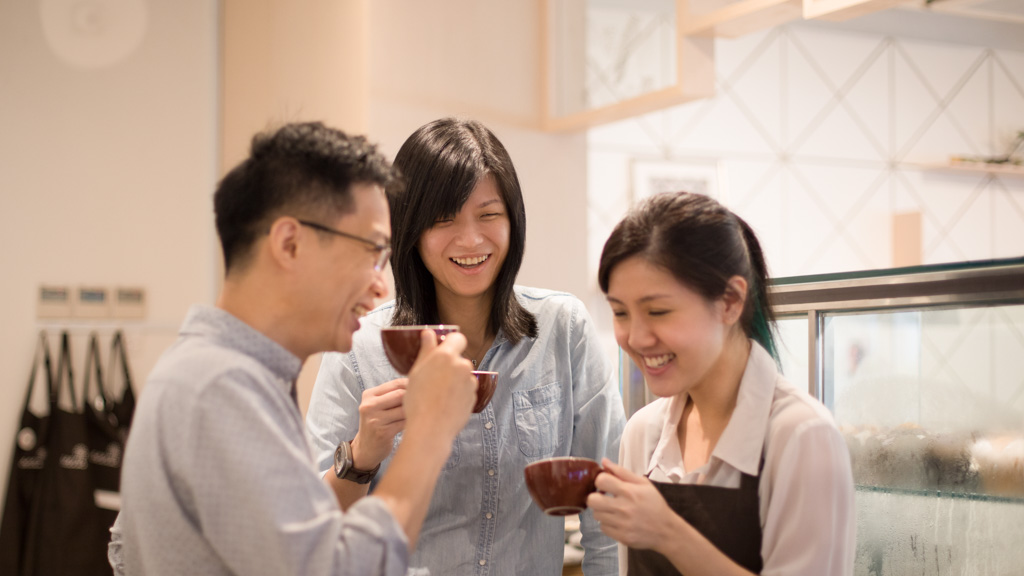 What do you think makes Seeds Café special?

Ju: I think it’s different because even though it falls under a social enterprise, they require a high commercial standard. I think that’s the key to success. In a way, if you want the students to learn and progress, that should be the ground you’re putting down.

Ja: There’s something I’d like to tell the public when they come by. It’s no excuse that the coffee isn’t up to the ‘market standard’ but I’d like them to be more forgiving with the coffee they get, because after all, it’s prepared by students with special needs and we cannot expect the coffee to be perfect. As much as possible, it’s our duty to train them to that standard, but meanwhile, let’s be more forgiving.

S: The café acts as a transition ground, or a bridge with the general public. It offers students with special needs a more controlled and safe environment to help them assimilate into the real working world. At the same time, it doesn’t coddle the students. They’re challenged and stretched at appropriate times so their maximum potential can be reached. The students might have special needs but a high standard is still put in place for the products they create and the service they provide. 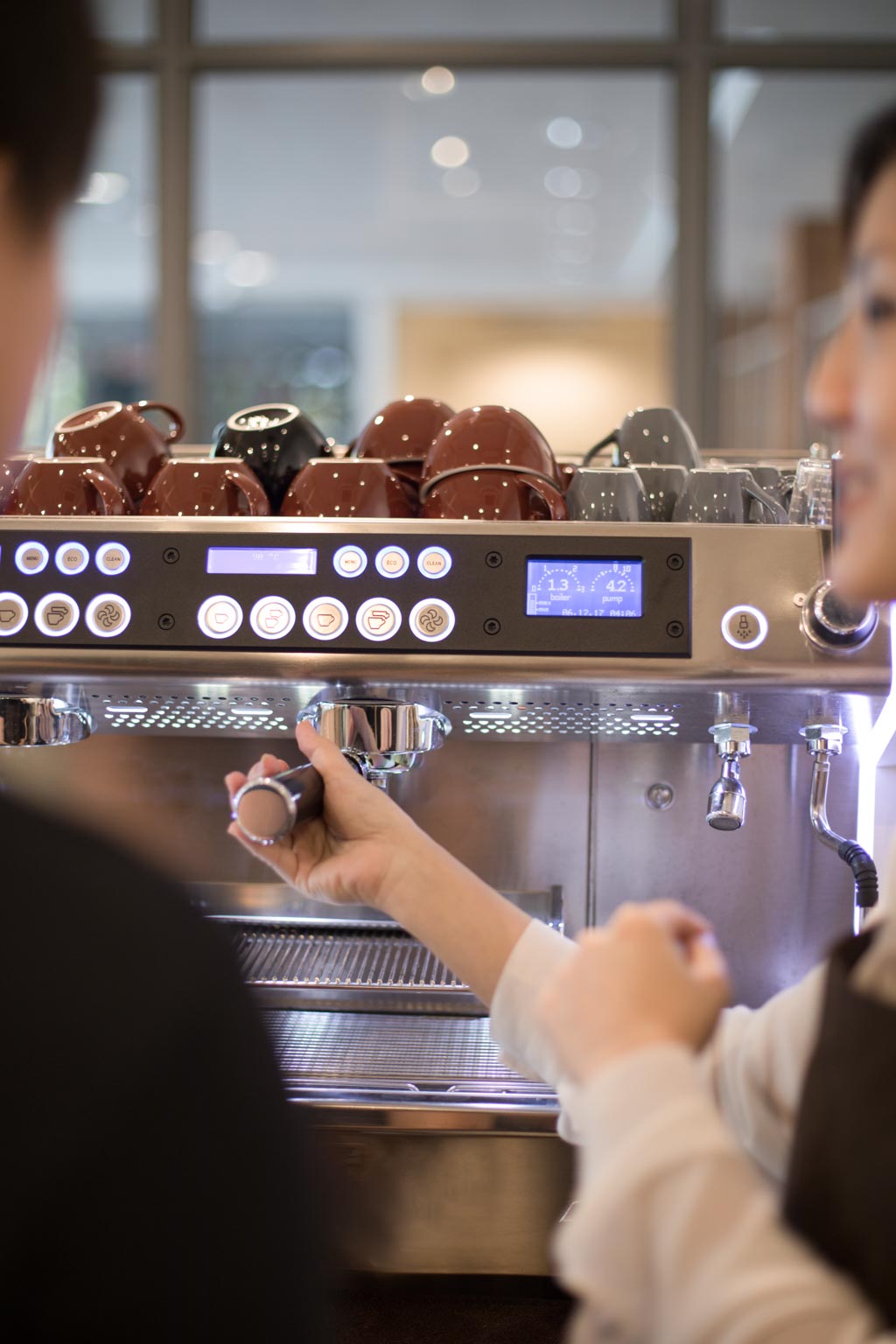 What have you discovered since being a part of this project?

S: Many times we might be especially lenient or overly protective of the students, but we realise that it might actually stifle their learning. They’re actually capable of so much more with the right guidance and enough patience. They take a bit longer to get there, but they do get there eventually. This project also gave us the opportunity to understand the struggles that the students go through daily. It makes us grateful for what we have and highlights the impact we can have just by taking a small extra step to understand and communicate with them patiently.

What are your hopes for Seeds?

Ja: Seeds is now in its early stages of operations and already we see how it’s helping the students we’ve worked with in picking up transferable skills, not just specific to coffee-making, but also in social and daily activities. It is our hope that they will continue with their vision, and at the same time maintain the standard and quality of the training given to students and the products they’re offering. 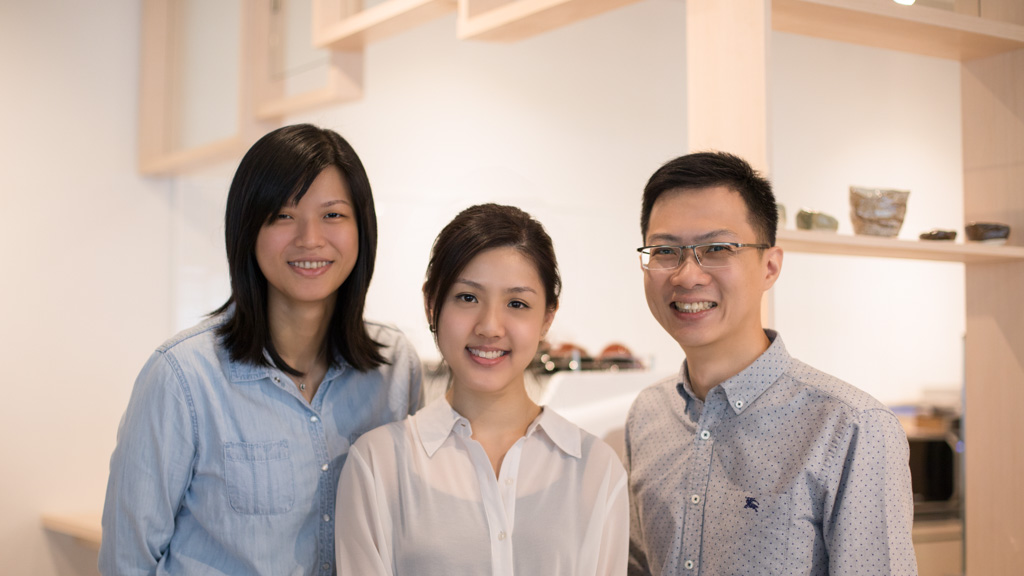