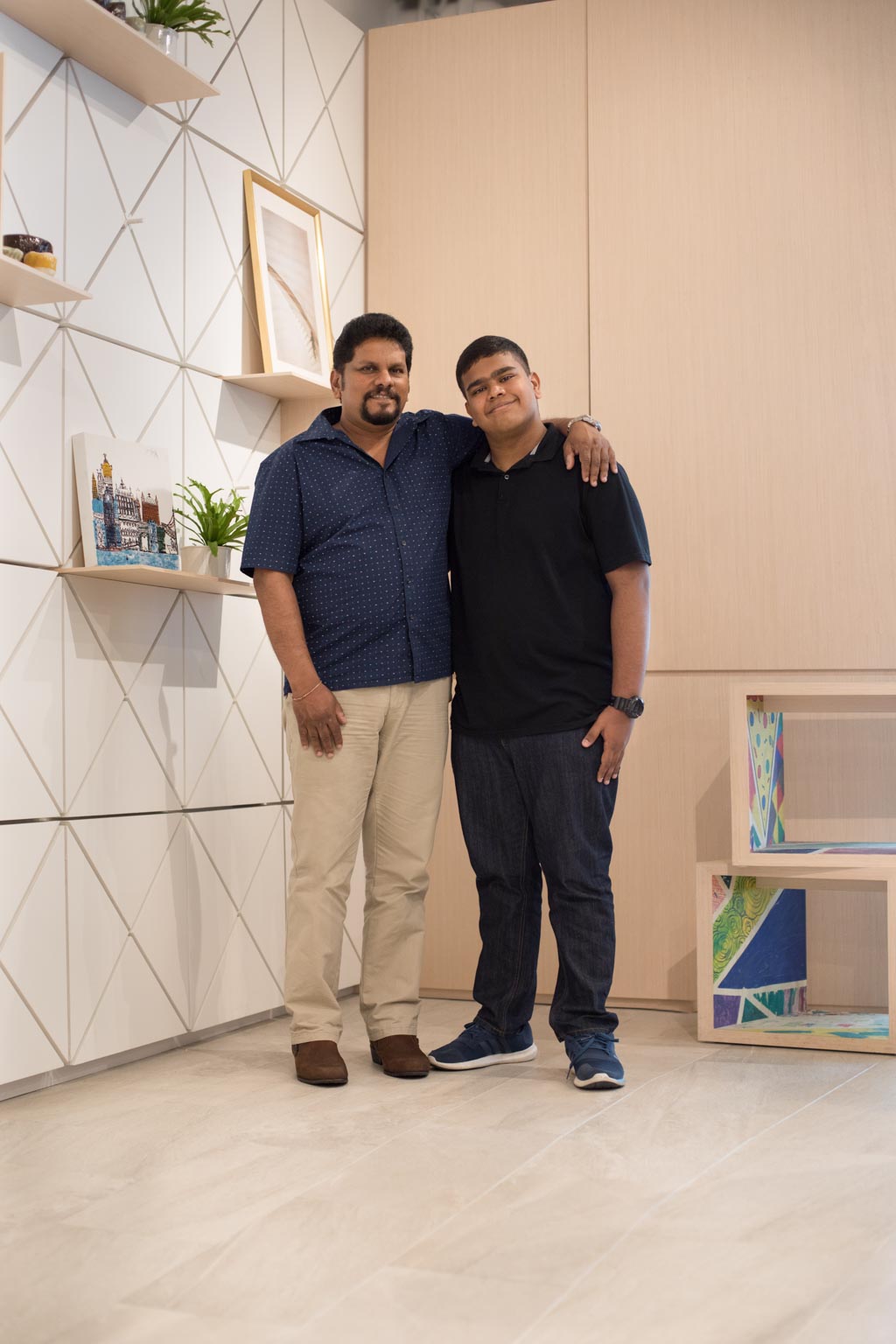 Mr. Ganesan is a man of few words, but it’s evident that he’s tremendously proud of his son, Harish. You get the sense that he’s a stoic pillar of support for his son, and is happy enough to let Harish take centerstage in all that he does, preferring to remain in the wings. Whether Harish is sharing about a piece of art he created, determinedly working on a couple of new paintings, or confiding with a whisper and cheeky grin about something while they tuck into coffee, tea, and a muffin, Mr. Ganesan is always right by his son’s side, watching on with an expression of quiet pride and also delight as he comes to realise what his son can do, and will do in the future. The both of them shared a bit more about themselves in the short time what we spoke to them.

Tell us a little about yourselves.

Harish (H): I’m 16 years old this year. I have a brother and he’s currently serving his National Service. I like cooking and playing games! I like to watch animations whenever I have some free time. I’ve been cooking a lot recently. I also starting working part-time at a café outside of school in October last year. I remember the coffee, and how to make the waffle batter and churros as well. They taught me many things—from sauce-making to frying.

Ganesan (G): My name is Ganesan and I’m Harish’s father. I work as an electrical technician. I would describe Harish as disciplined, helpful around the house, and very independent.

Harish, how do you feel about your works being up on display?

H: I feel really proud and good. I don’t know how to explain it but I hope people who see them feel good and like them. 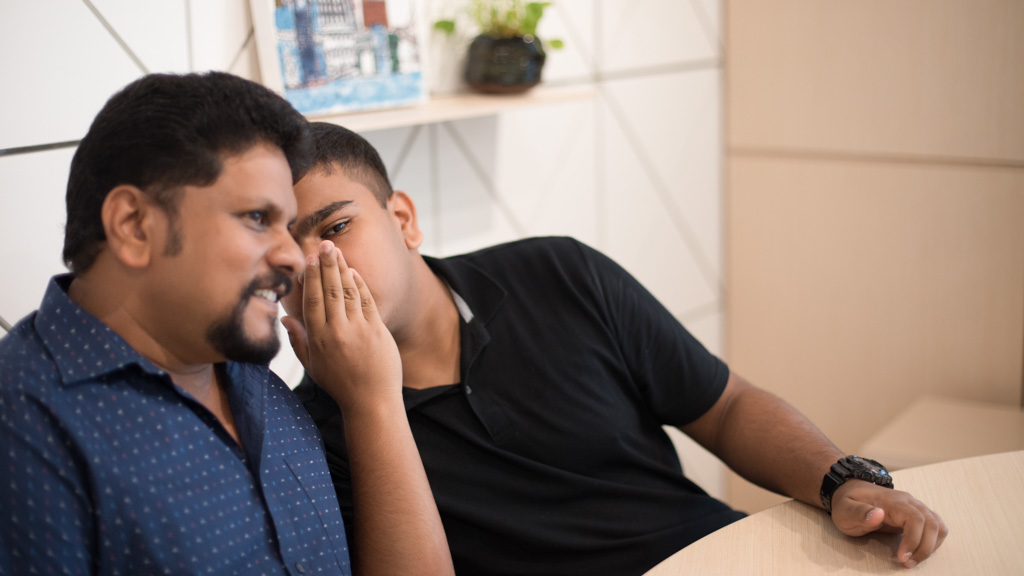 When did you discover this passion for art?

H: I don’t do a lot of art—I usually draw or paint, but mainly for decoration. I think I’m starting to like art but my passion lies more in cooking. I do art in my free time, sometimes. I use a lot of pencils and colour pencils, and I try to make my own stories. I like that in art, you get to create your own characters. I’d like to do art for fun in the future!

G: Compared to art, his interest lies more in cooking. (laughs) I actually help him more with that. There were several times where he said he wanted to go to the library to look at recipes. I help him out with the ingredients. But there was once when we went to Red Box, for an event by the Youth Corps called Everyone’s An Artist, and that was when we realised that he could draw. That was around March last year. I feel that it’d be good if he can get more training since it’s something he’s good at. He mentioned that he’d like to make a comic book! I think it’s really good how he put his imagination into paper form.

Harish, when you work on an art piece, what comes to mind?

H: I don’t have a favourite artist. One of the art pieces that I did was a dragon—I actually got good at drawing the dragon after a while. I actually never thought of drawing until sometime in May last year, because I didn’t have the time. That’s why now I realised that nowadays I’m getting better, because of practice. I want to make a comic where I can read at night or all day! I don’t have to use my phone and read. I haven’t thought of the storyline yet but I’d like to use my friends as characters. 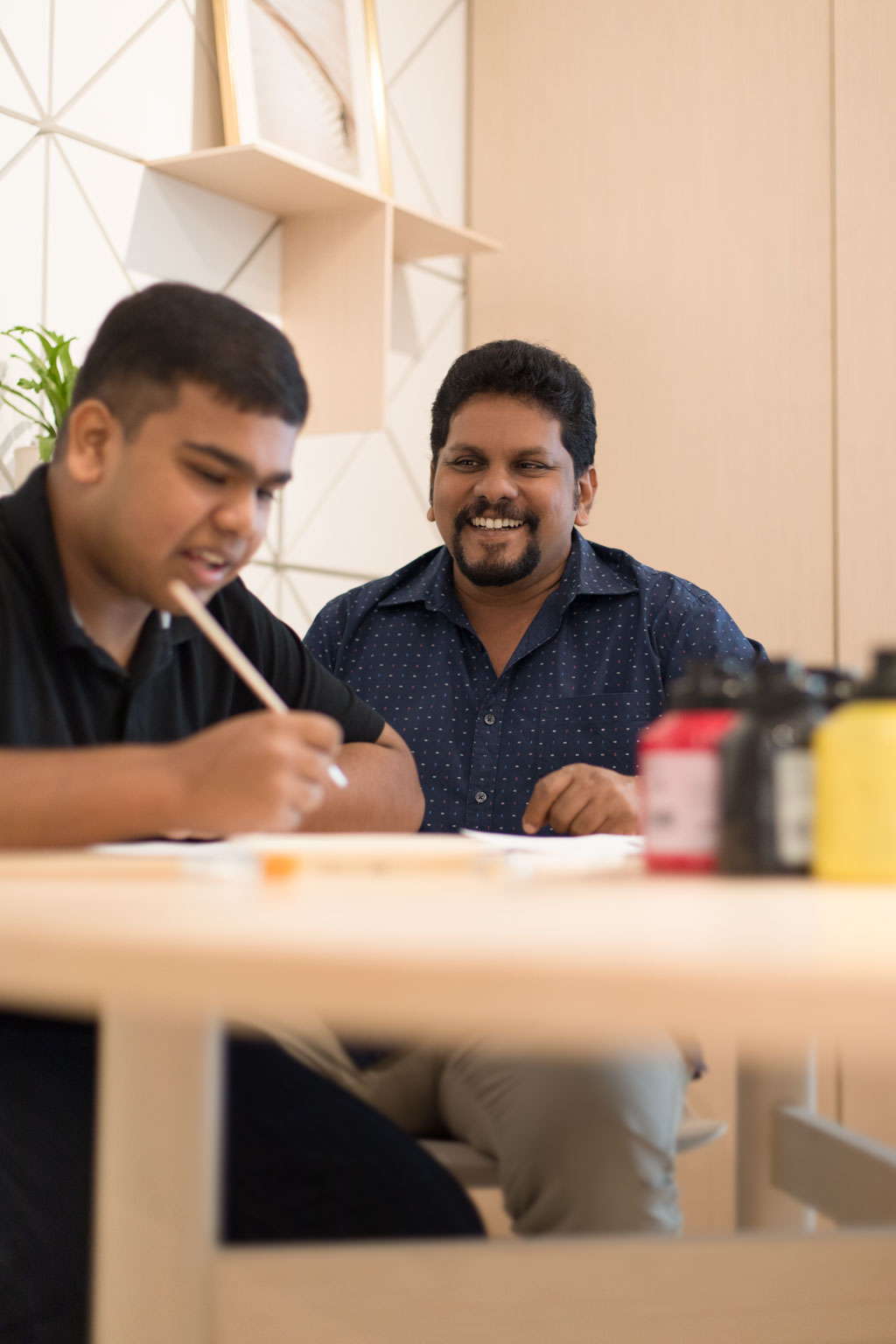 What do you like about this café and how do you feel about this initiative?

G: I think it’s a good initiative as I feel that the students can be trained in an actual working environment before they go out to work.

H: My favourite parts of the café are the coffee machine, the oven, and the decorations, especially with the wall. I like that the shelves can be slotted anywhere you want. I like the cakes and pies here. If I worked here, I’d like to have sandwiches on the menu and more cakes.

What are some of your hopes and dreams for Harish?

G: I feel that maybe he can further upgrade his cooking skills and also his drawings. One of the best things I had that he made was tuna spaghetti. It’s really nice. His teachers taught him and he actually practiced back at home as he said he’d like to make something for me on my birthday. 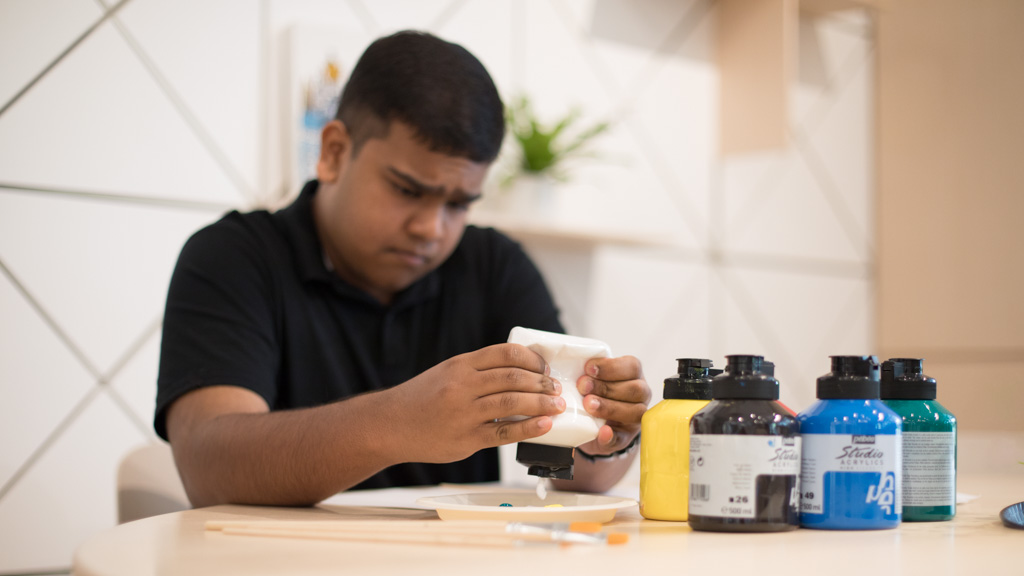 Harish, what are some of your favourite subjects in school?

H: I like baking and workshop retail. For baking, we make cookies and cakes for special occasions like Hari Raya, Chinese New Year, Deepavali, or even Christmas. I made tuna spaghetti for my dad at home recently!

What’s something you’d like to be when you grow up?

H: Currently, there are a few. First on my list would be to become a chef. Either that, or work in retail. Cooking and retail can be two main jobs! If I were to become a chef, I’d like to cook Asian cuisine with a lot of seafood. 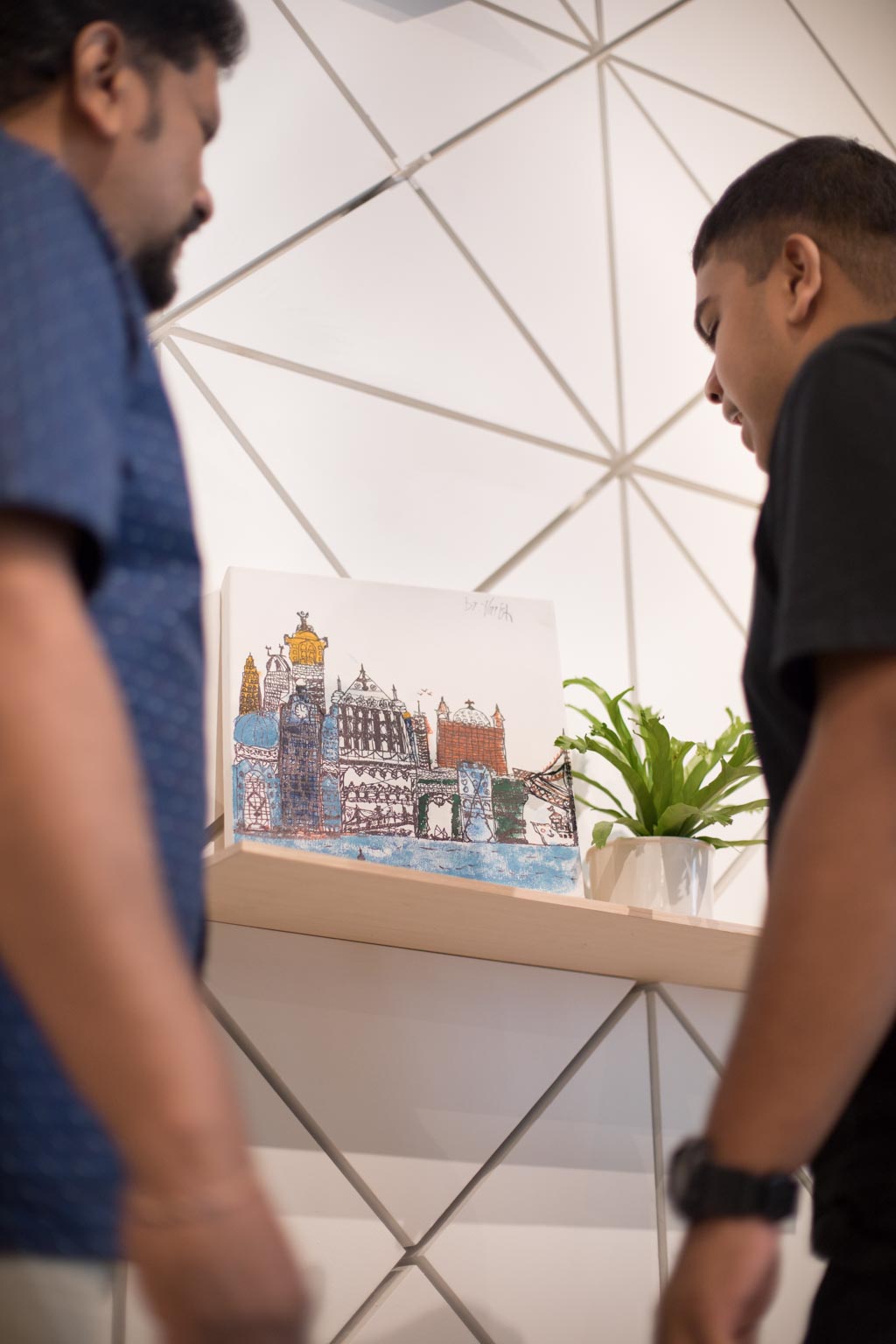 Do you have a favourite thing to eat?

Who’s a role model you look up to?

H: My dad and mum and mostly, my brother—I like my brother a lot. There’re quite a lot of actors I like too, like Shah Rukh Khan, Kamal Hassan, and the Ah Boys To Men actors.

If there’s something you could say to the whole world, what would it be?

H: I’d tell the world that I’m cool, amazing, and I can do well. 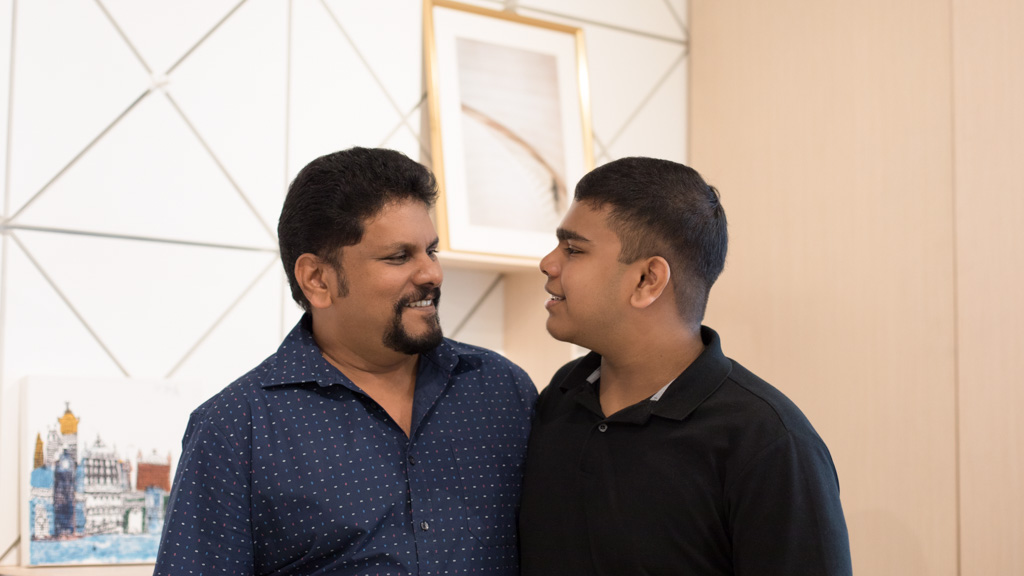