Though our parents are our first teachers in the journey of life, we too teach them some things unknowingly—whether it’s the crucial skill of patience, reminding them again how to have fun, or just finding moments of laughter amidst the chaos.

In the last part of our Father’s Day special, we talked to Esmond and his three musketeers—Skyler, Elijah and Ezekiel. From being a singer in his own rock band, to having three kids whose collective level of excitement could easily rival that very same band, it’s safe to say Esmond has always been jumping from one noisy adventure to another. Esmond and the three kids joined us for a frenzied and fun-filled interview where he shared both the little and big things in life that the kids have taught him over the years. 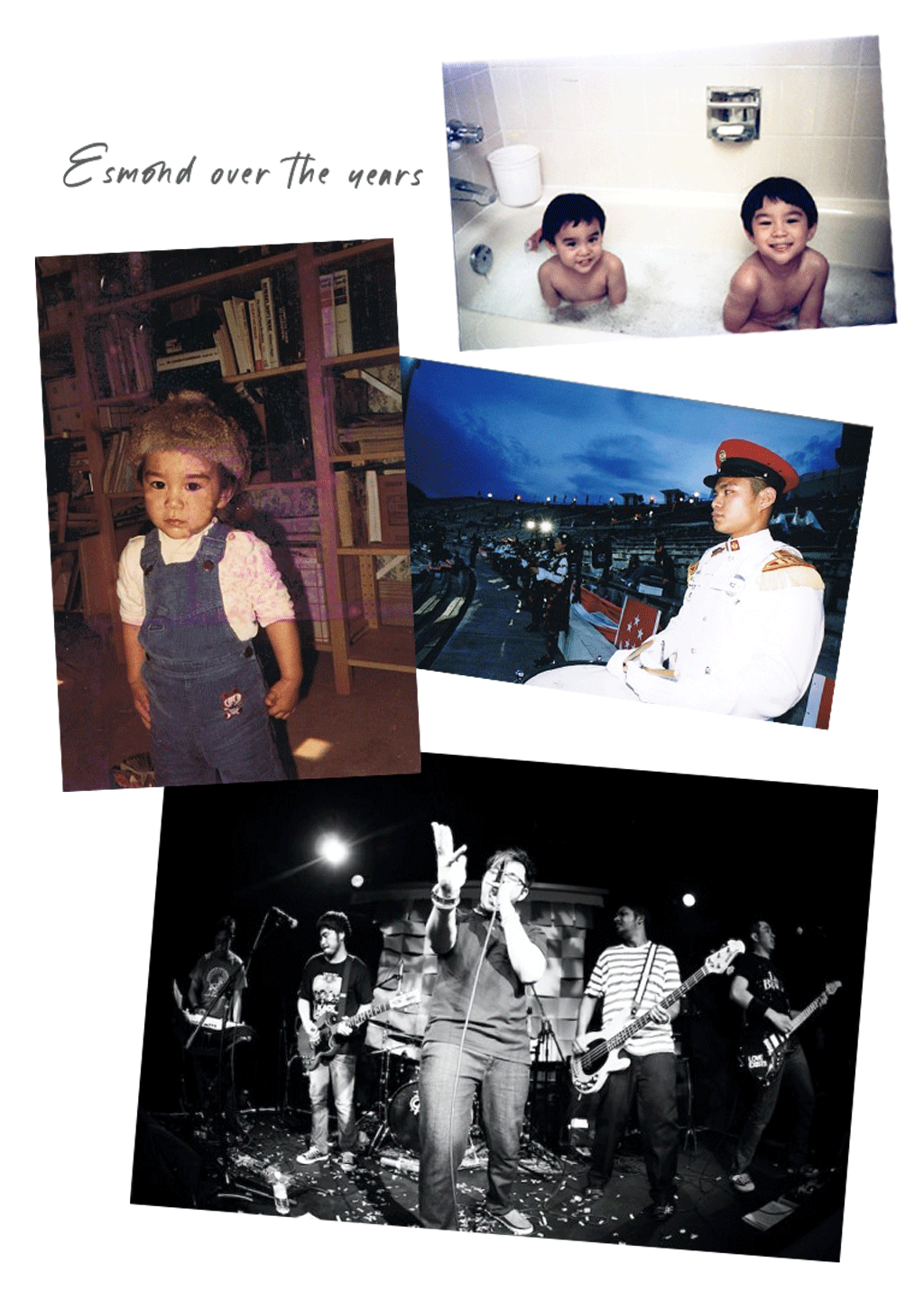 Shentonista (S): Let’s start off by talking about your past, Esmond. We hear that you used to be quite the rockstar—do the kids know about this?

Esmond (E): I was never a rockstar (laughs). I used to play in a band and I was quite involved in music. It was a noisy band, and we did a fair bit of rock shows for about ten years. It shaped a lot of what I’m doing today, and influences even my career choices. The kids vaguely know, but they were too young to remember anything, especially Ezekiel. Skyler and Elijah actually attended my last show and they both fell asleep, so I guess it’s something quite soothing to them. (laughs) All three of them actually have an appreciation for heavier or faster-paced music.

S: Since music’s been such a huge part of your life, have you tried to pass down your love for it to your children?

ES: Not intentionally, but yes, at times. I remember being forced into it when I was young and  didn’t quite like it, so even now, I don’t force them to go for music lessons. We do try our best to make them develop a certain amount of taste in what they listen to, so that’s how far my influence goes. So what we do is: we listen to a lot of Spotify, or play in the car and and sing along if they like the song, but nothing really formal. They’ve all got their own hobbies. 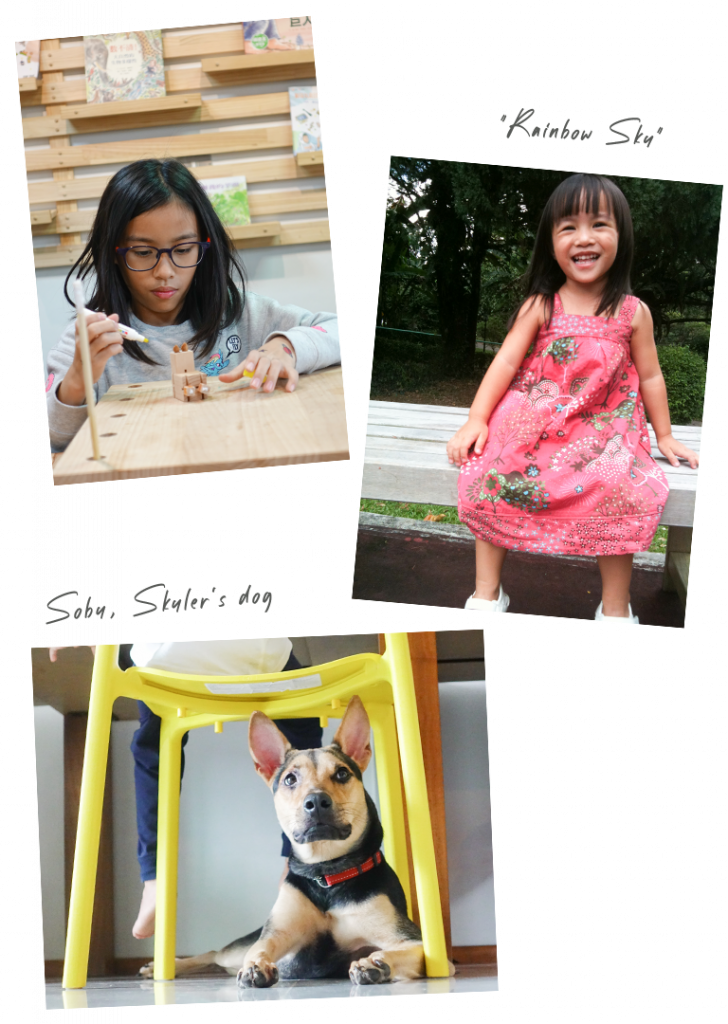 S: So Skyler, Elijah, and Ezekiel, share with us a little more about your hobbies then.
Skyler (SK): I like to draw, and play with my dog Soby. She’s a shelter dog that we adopted. Dad only plays with her sometimes.
ES: Yeah, she’s got too much energy. (laughs) I’m a dog person, but this dog is a lot, especially when I already have three kids with too much energy.
Elijah (EL): My hobbies are skateboarding, football, and basketball. There was a penny board at Dad’s warehouse and I tried it—and then I just kept on skating. Dad’s not that good at skateboarding but he still tries. To me, he’s good at football and basketball.
Ezekiel (EZ): I like cycling, playing video games, and dabbing.

S: We know school has reopened recently—what are some things you’ll miss about staying at home?
EL: Being able to play video games longer.
EZ: Same. I miss staying at home because I don’t like school (laughs).
SK: I don’t really miss anything because I’m still at home—I’m homeschooled. So everything’s pretty much the same for me. 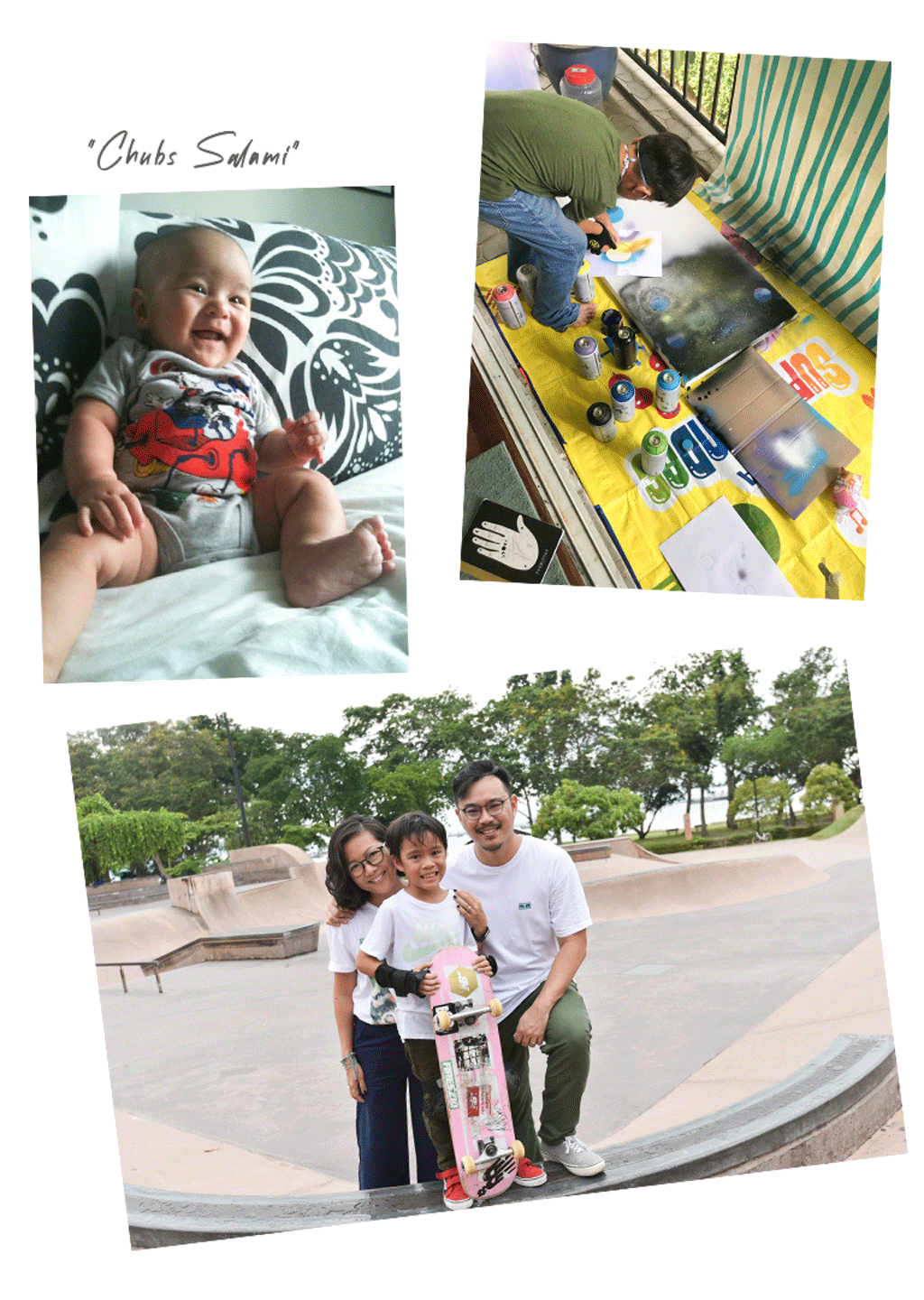 S: Esmond, your kids are all very different and diverse in their own way. What do you think are some things they’ve taught you about parenthood?
ES: Grace, patience, and learning how to let go. As you can see, we can’t really control them (laughs), so we just take it one day at a time.

S: What are some similarities you see between the kids and yourself?
ES: I do see myself in Elijah and Skyler both; it’s like a mix. For Skyler, we both cannot pay attention—we’re both quite dreamy and spontaneous. For Elijah and I, we’re both very stubborn. Ezekiel’s different from me,  he’s very happy-go-lucky, very cheery, and very free-spirited. 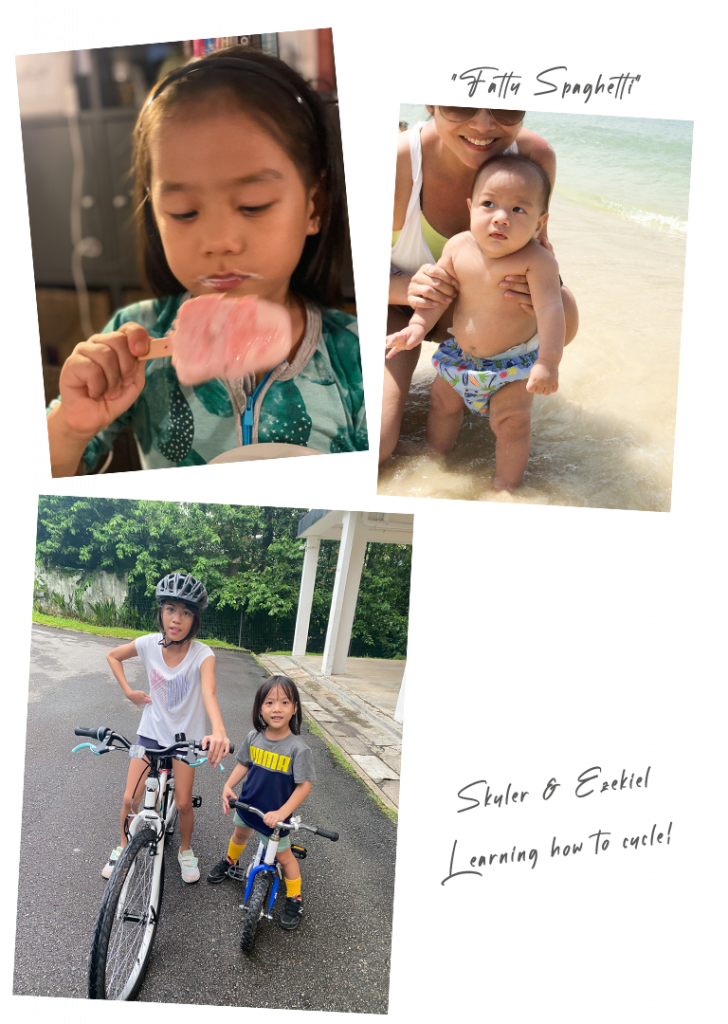 S: Favourite family activity:
EL: Holidays!
EZ: Like going to Canada.
EL: We just like going on holidays.
ES: The last holiday we had before Covid-19 was our trip to Vancouver, so it’s very fresh for Ezekiel, especially since he spent his fifth birthday there as well. It was also the first time he saw snow. Overall, we really enjoy travelling as a family as much as we can, to the point where they’d rather trade their toys for the opportunity to travel. I do enjoy going on walks and hikes, but the kids don’t.
EZ: But I do, Daddy!
ES: Yes…when I carry you. (laughs) 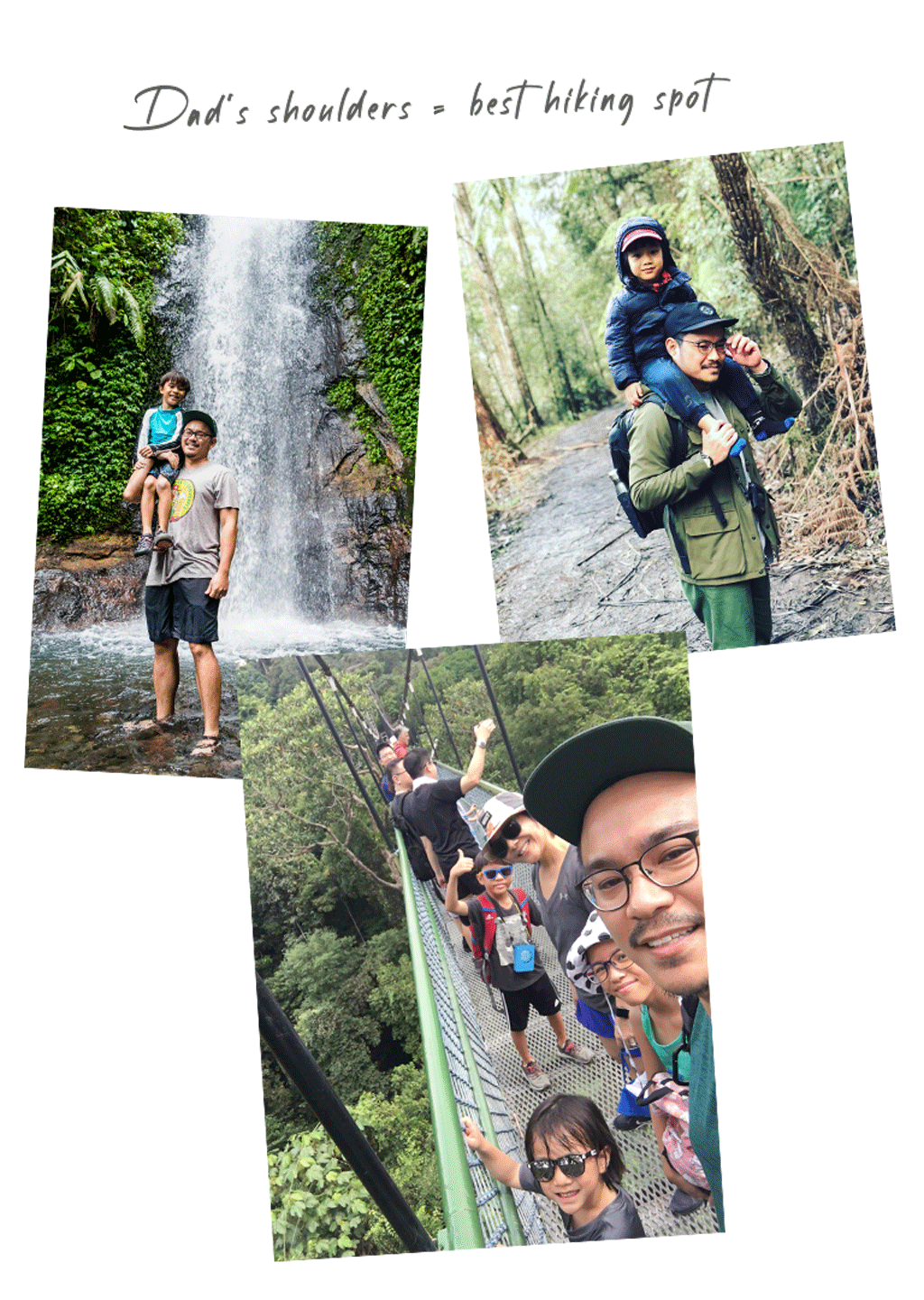 We moved on to the rapid fire round, where we witness a few disagreements between the kids and their Dad regarding some of the answers—and we got to see a glimpse of the “bad cop” they claim their Dad can be at times.

S: What’s something that Dad says a lot to you?
SK: “Just because.”
EL: Yeah, when we ask him something and he doesn’t really want to tell us the answer, he’ll say “just because.”
ES: Why is the sky blue? Just because it is!

S: If your dad was a superhero, what would be his super power?
SK: Toxic gas…like farts.
EL: When he stares at people, they immediately stop using their phone.
EZ: When Daddy eats stuff, and he becomes stronger, and then he arm wrestles with everyone.

S: Who do you go to ask if you want something—Mum or Dad?
EZ: I ask Daddy at first, and then when he says no, I go to Mummy.
EL: Mum, because Dad always says no. She says yes the most.
ES: What most? No lah.
EL: Yeah, it’s true, most of the time!

S: Some habits you have in common with Dad are:
EZ: We fart a lot.
SK: We both can’t pay attention.
ES: I’m diagnosed with ADHD (Attention Deficit Hyperactivity Disorder) and we’re both hoping she doesn’t follow suit, but there are signs. I actually got diagnosed only three years ago. I went with my mom, who told me she always knew. (laughs) 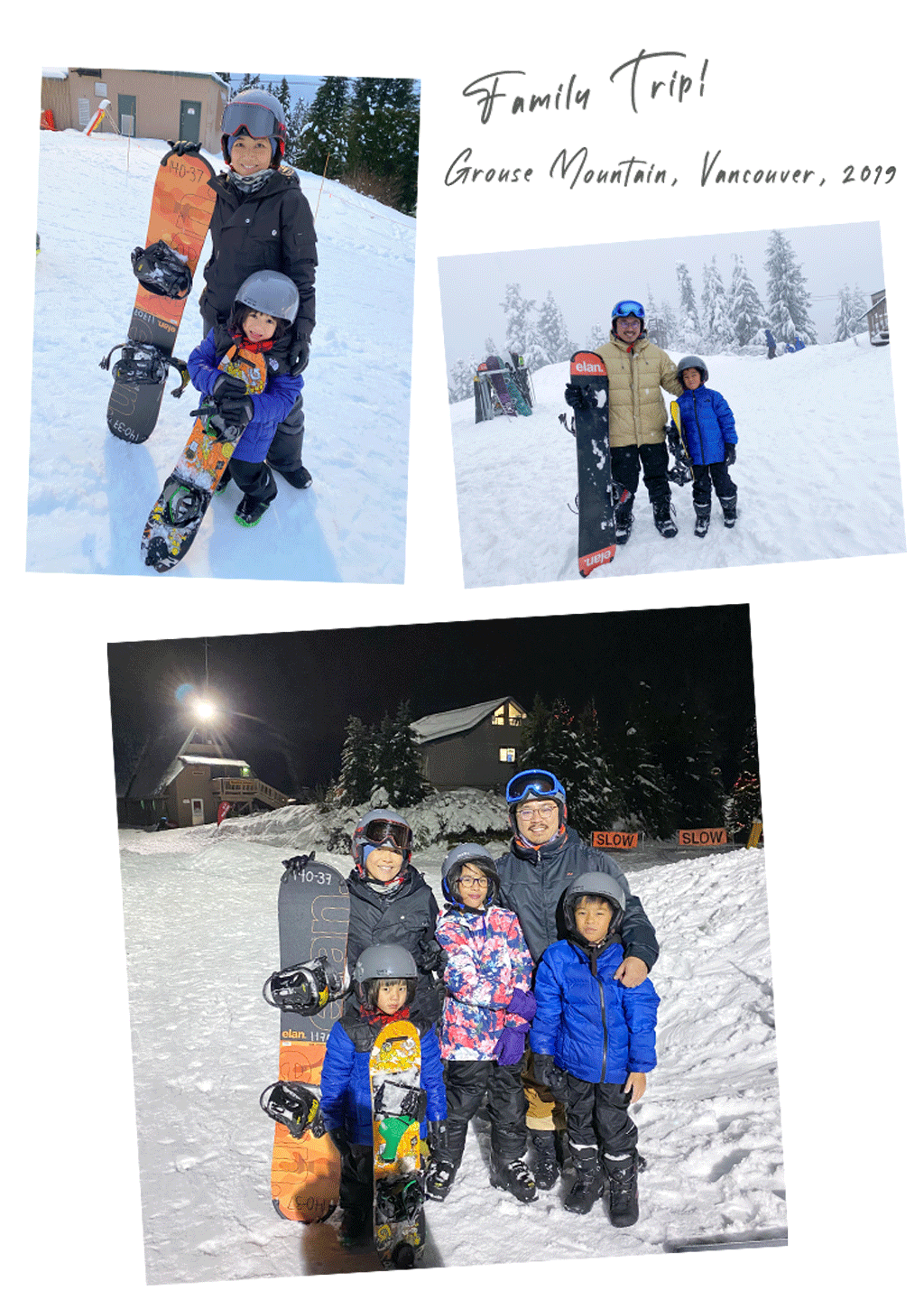 With the kids having spilled their secrets about Dad, we gave Esmond a chance to get a turn of his own.

S: Do you have any nicknames for the kids?
ES: They’ve actually got many nicknames but the ‘official’ ones are the ones Skyler came up with, so I’ll let her do the explaining.
SK: Elijah’s nickname is Chubs Salami because he was very chubby when he was a baby. Zeke’s name is Fatty Spaghetti for the same reason. When I was small, I gave myself the nickname Rainbow Sky, because my name is Skyler and I like rainbows.
ES: Yeah so it’s Rainbow Sky, Chubs Salami and Fatty Spaghetti. You can tell that we do a lot of food here.

S: Who usually gets the last piece of cake?
ES: Skyler, because she’s the only one who likes cake.

S: What’s each kid’s favourite subject in school?
EL: Physical education, because we don’t really get educated while doing sports, we just…do sports.
SK: Ezekiel’s is toy time. Mine is lunch.
ES: Can you say something, like, educational? (laughs)

The kids also took the time to draw their own Father’s Day card, filled with some things that reminded them of Esmond, while he wrote out notes for them that he shared for the first time in the interview. 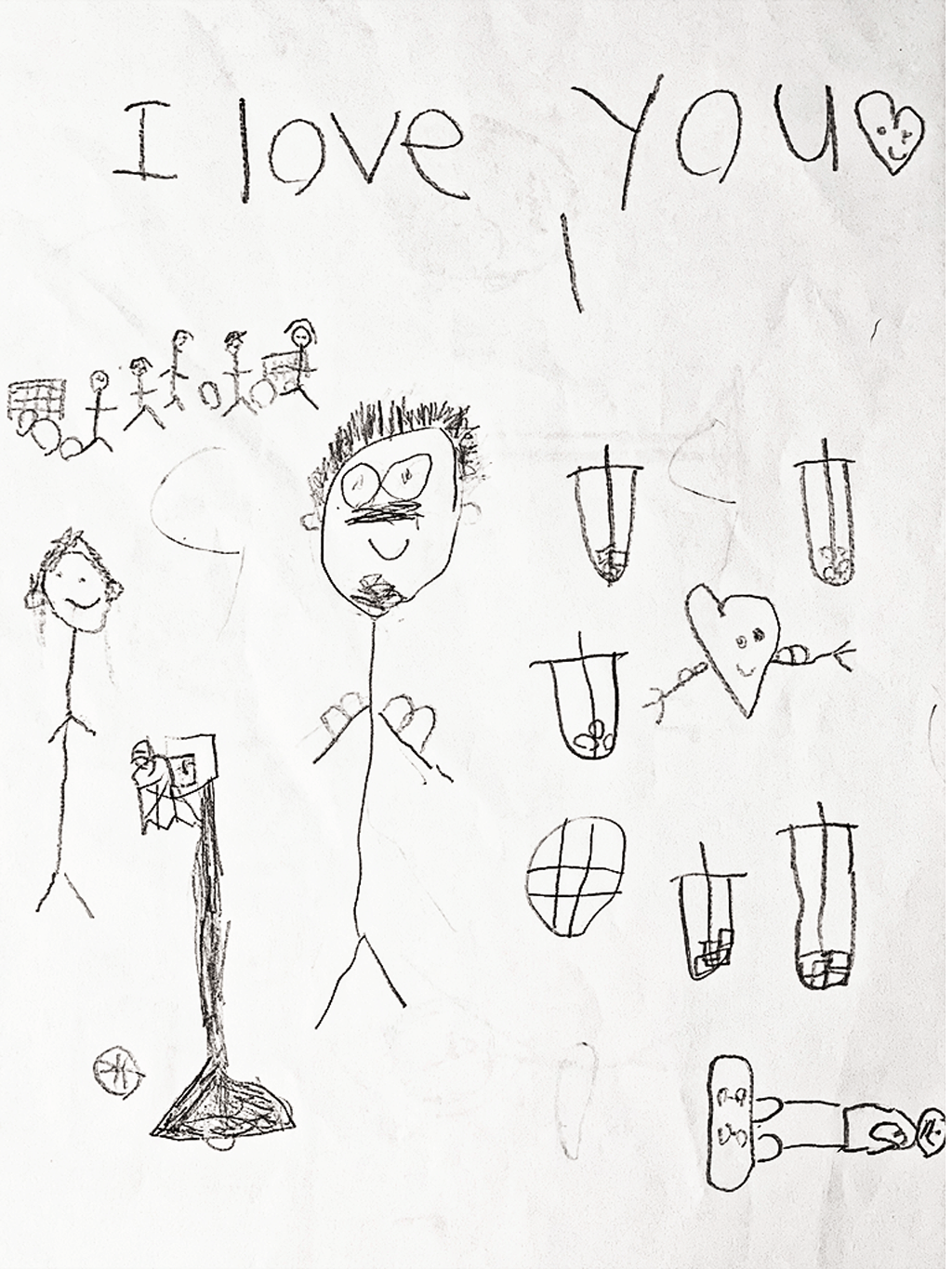 “This is Daddy and me trying to play football, and there is also bubble tea and hearts, because I love bubble tea.” 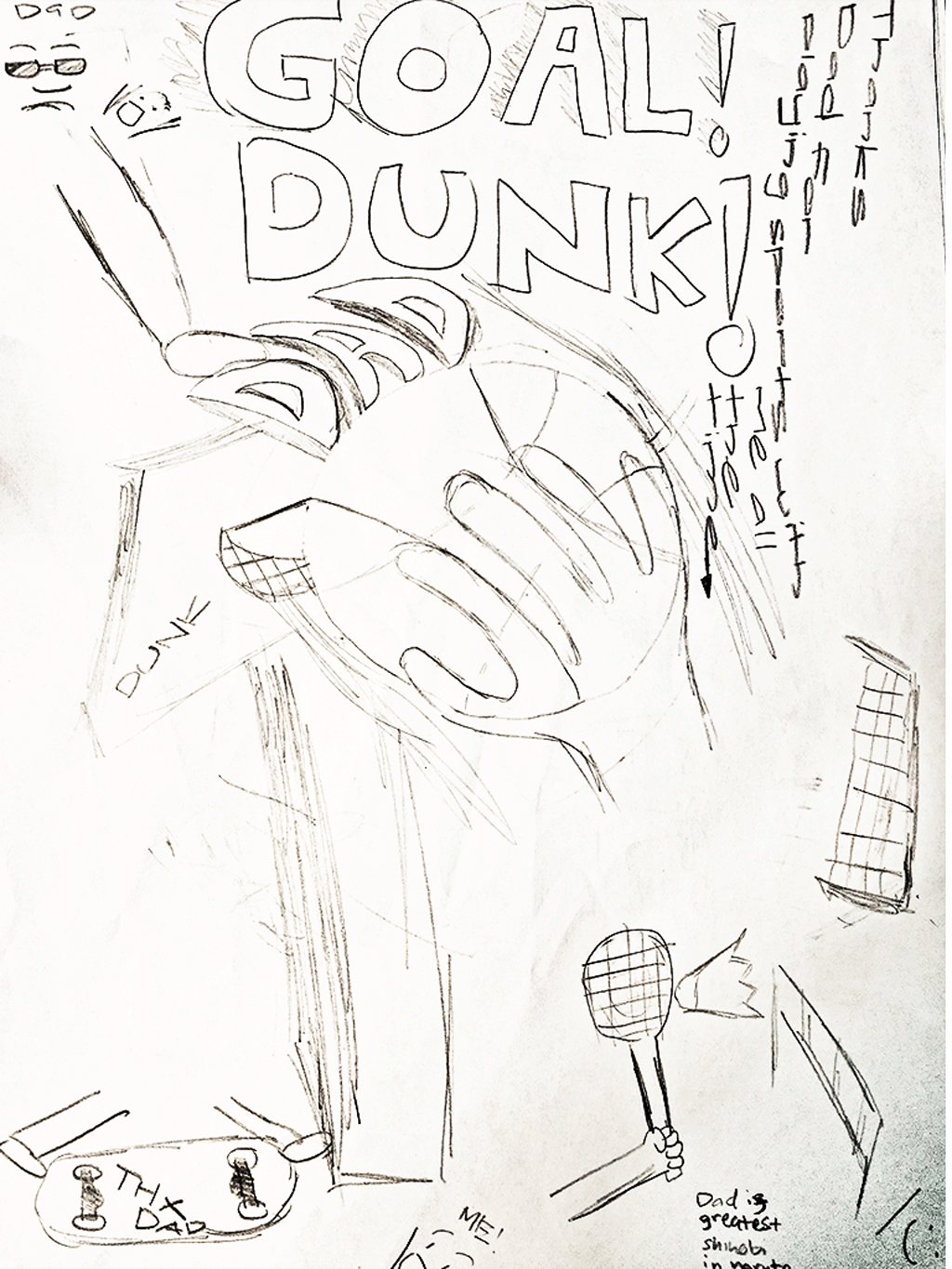 “In Naruto, there’s a character called kazekage, who’s the strongest ninja in the village. That’s what I drew Dad as. So it’s his leg kicking the ball into the goal, and another part where he’s playing badminton and doing a kick flip on the skateboard.”

(Esmond would like to clarify that he cannot do a kick flip on the skateboard.) 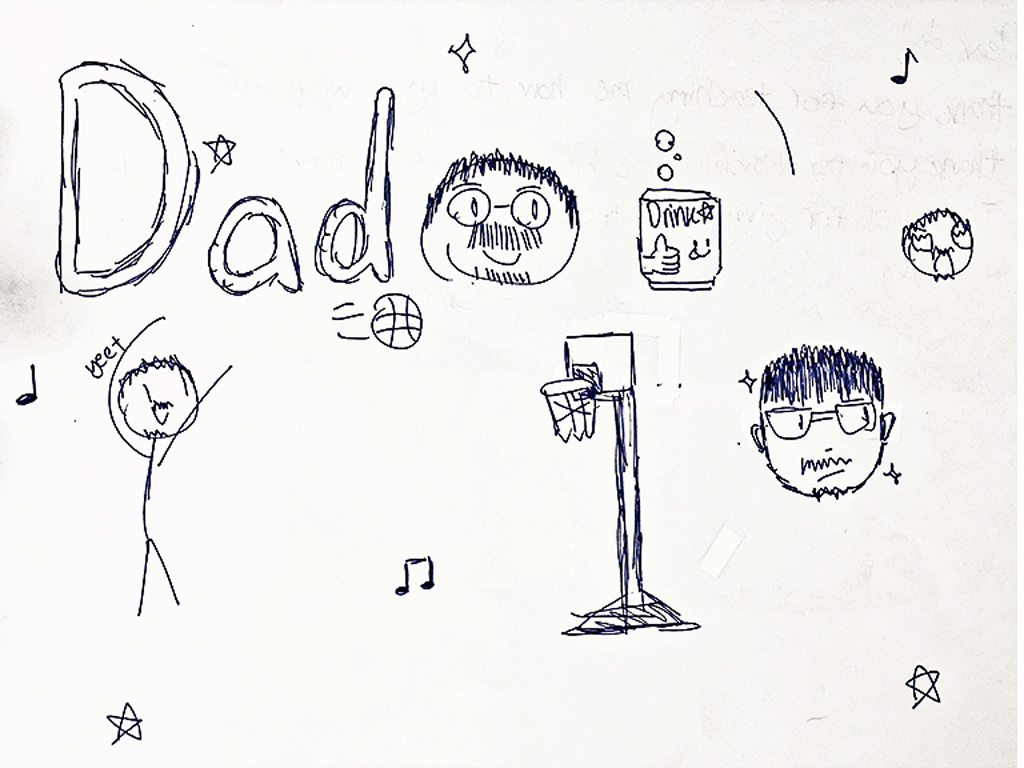 “I drew things that reminded of my Dad, so there’s a basketball, an angry face because that’s what he looks like when he’s angry, and music note because he sings.”

(Once again, Esmond would like to clarify that he definitely does not say “yeet”). 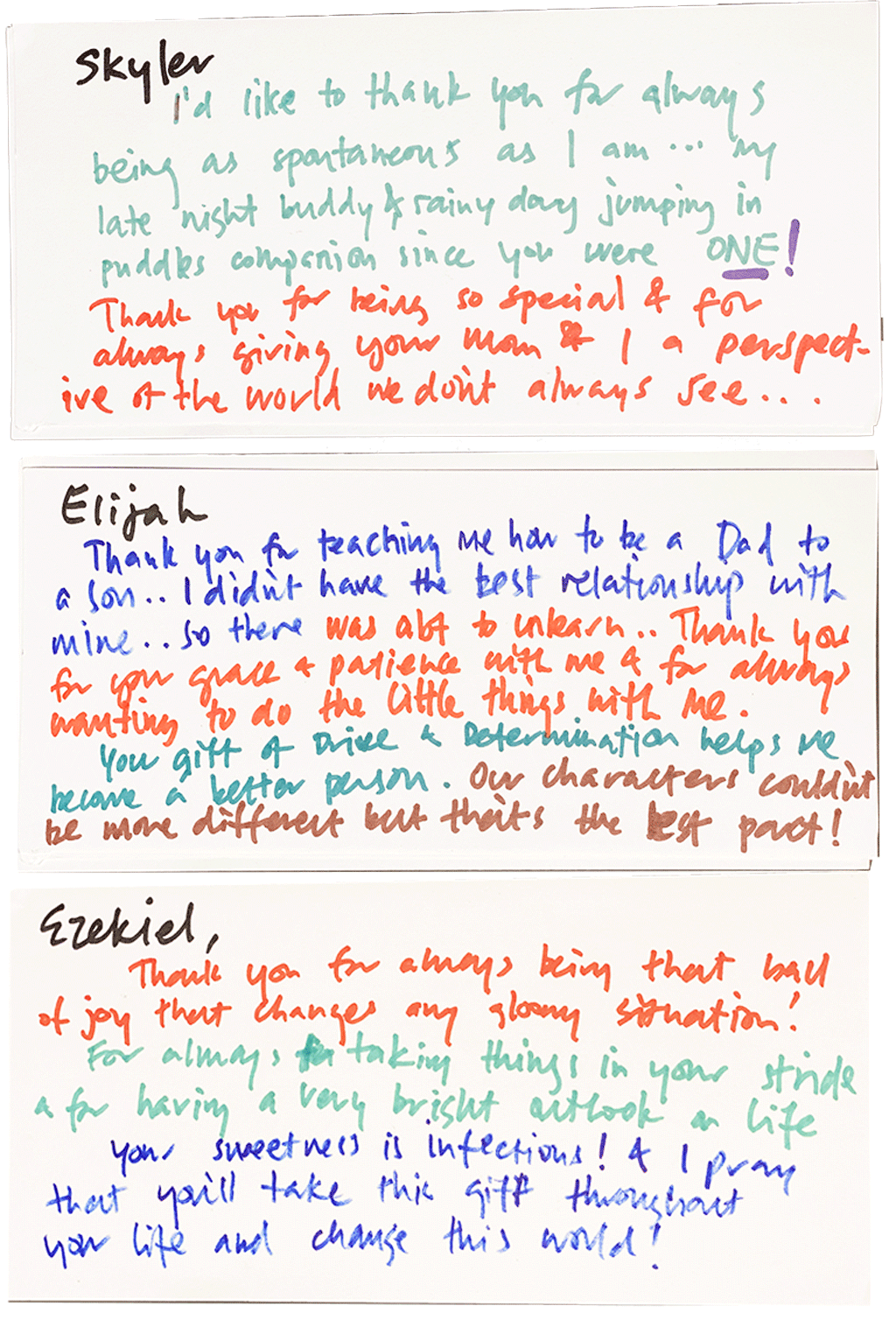 Esmond’s letters to his children

S: Before we end our conversation, one last question for the three kids—what’s one life lesson your Dad has taught you?
EL: Don’t give up.
SK: That I should try even though I’m scared, because it’s all in my mind. Fear is all in your mind.
EZ: My daddy teaches me about cycling.
ES: (laughs) Not a life lesson, Zeke.

S: And Esmond, what’s one advice you’d like to your children to take through life?
ES: To really know your identity. For each one of them, I really hope they can discover and hone their identity and self-confidence.