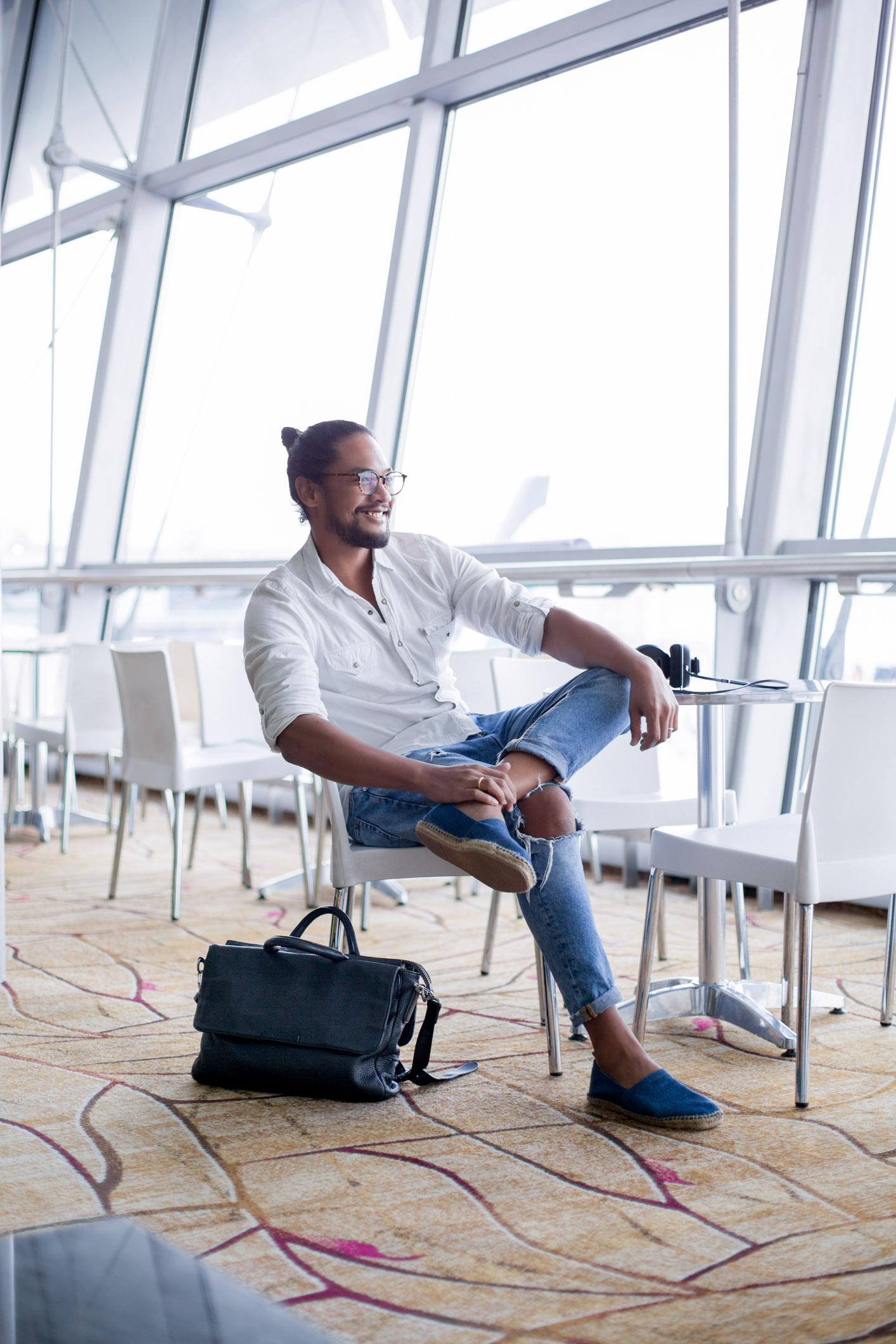 Pern, designer from Bali, in the T1 Transit Hall.
Accessories from Esprit Barcelona, jeans from H&M.

What do you do?
I’m an architect and planner, but I’m helping my wife out with her fashion design business. She does the fashion, and I’m her personal assistant! 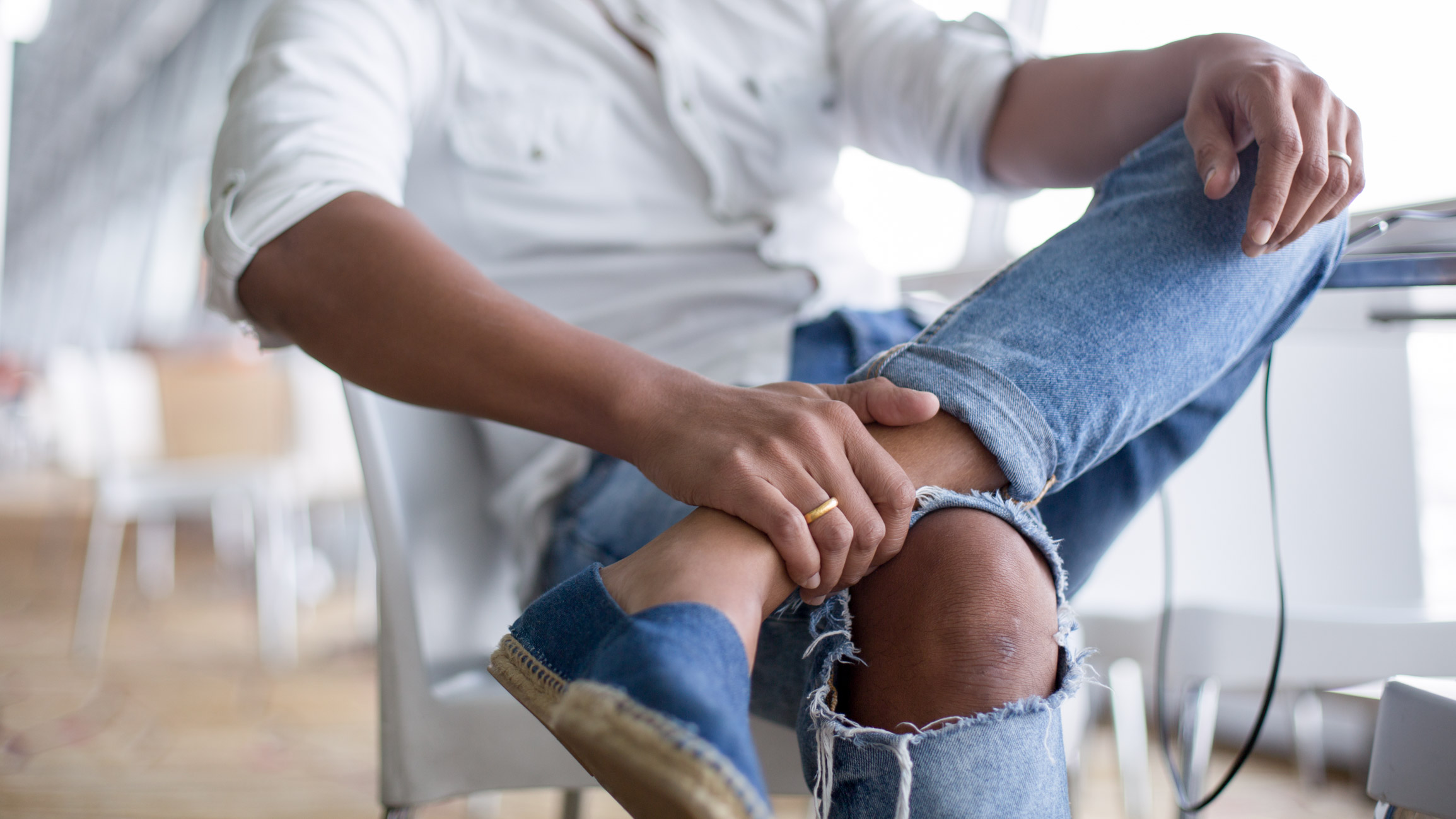 There was just a little something about Pern that made us look—stare, even. It could have been his comfortable, casual travelling get-up of a loose fitted shirt and ripped jeans, but we think it’s that certain je ne sais quoi that’s becoming more and more elusive these days. Pern is a truly global citizen: born in Singapore, he’s lived in the Middle East, calls Australia home, and is based in Bali with his wife, two daughters, and a newborn son. When we met him he was on a short transit before heading to Ho Chi Minh City for work, but not before picking up some alcohol as gifts before his flight. 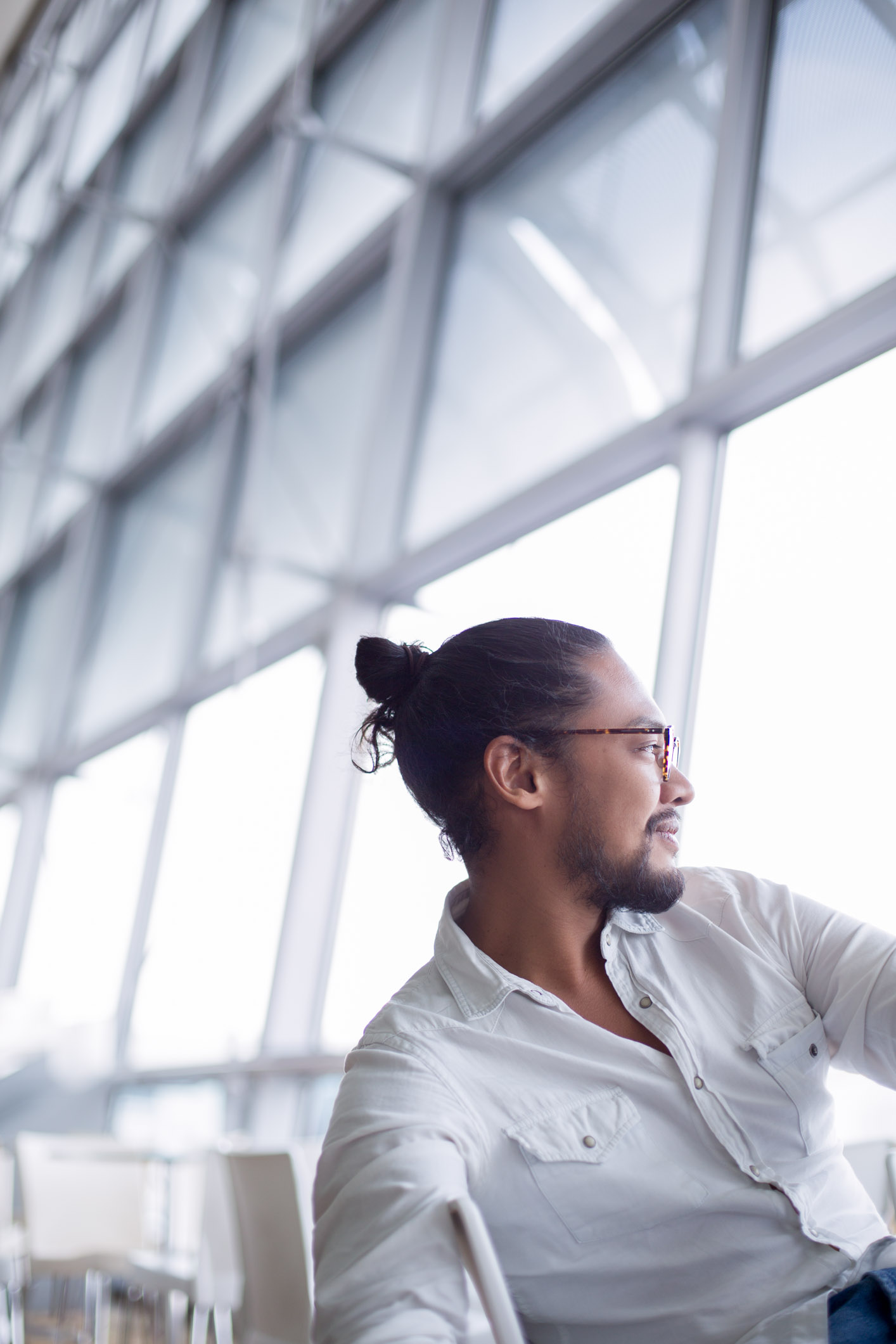 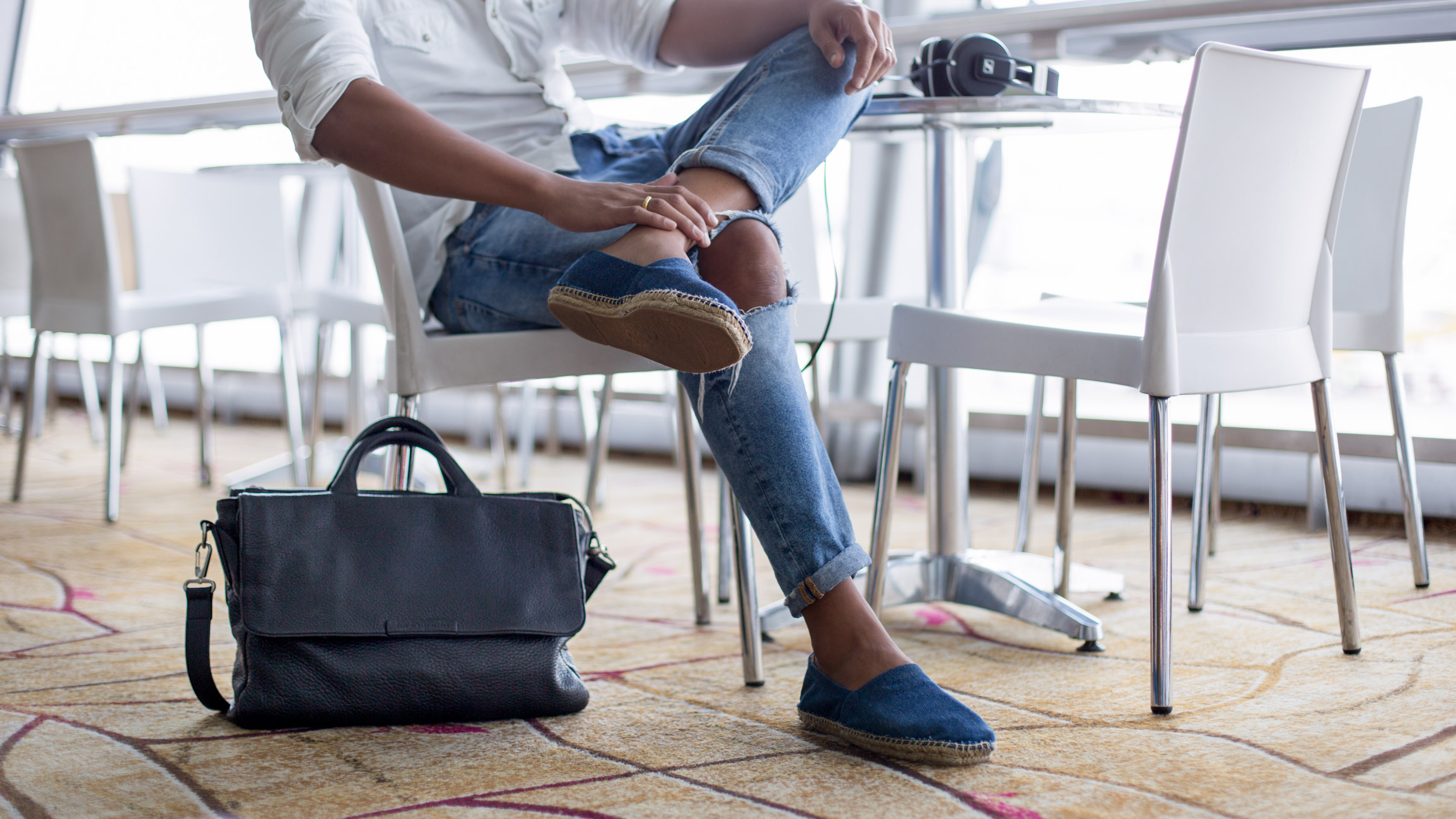 A good airport, Pern says, is exactly what Changi Airport is—clean and efficient. “The children’s areas are excellent for our kids as well.” He goes on to equate Changi Airport to the king of fruits. “That’s because of the few interesting smells in airports and on planes, some of which I encountered today!” Travelling is usually smooth-sailing for Pern, and he describes his family’s recent trip to Spain as one of the most memorable. “We went to a friend’s wedding somewhere to the north of Madrid, then travelled around Europe. We had a really good time,” he says. “There’s a lot of organisation required for travelling with two little girls, but they were surprisingly easy to travel with.” 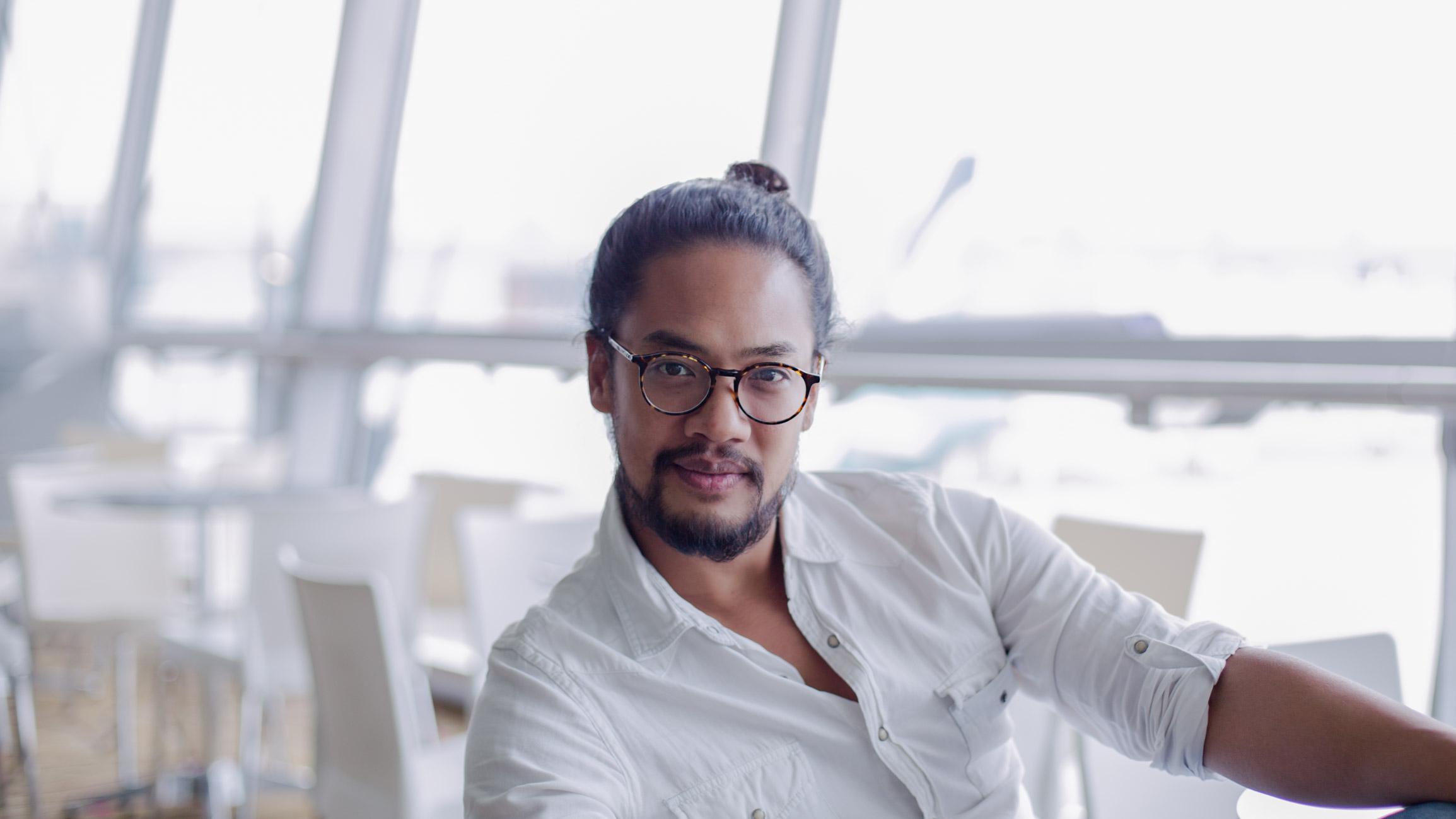 And even though he jokingly describes his five-day work trip as “a pretty good break” from his kids, it’s clear that Pern is very much a family man, softening as he speaks about the leading ladies in his life. “My daughters are good kids actually, and pretty smart girls,” he says. “They may look like me, but they definitely take after their mummy.”